Our guide to the Ocean State's sweet and sticky barbecue scene.

It’s nearly a three-day affair to get that smoking bark on beef brisket at Durk’s Bar-B-Q in Providence. New chef Ed Davis takes us through the process. By Jamie Coelho.

11 a.m., two to three days in advance: Briskets — a cut of beef from the top of the cow’s shoulder and into the breast — arrive at the restaurant and are taken out of packaging, then carefully trimmed to create an even layer of fat on top and refrigerated.

24 to 48 hours before smoking: The briskets chill in the walk-in refrigerator for one to two days before they are dry-rubbed and smoked. “Generally, the meat has to dry out until it gets tacky on the surface,” says Durk’s Bar-B-Q chef Ed Davis. Polymers form a skin on the meat, called the pellicle. “It’s super important that the pellicle forms so the smoke adheres to the meat, which will give you that nice pink smoke ring around the edge.” 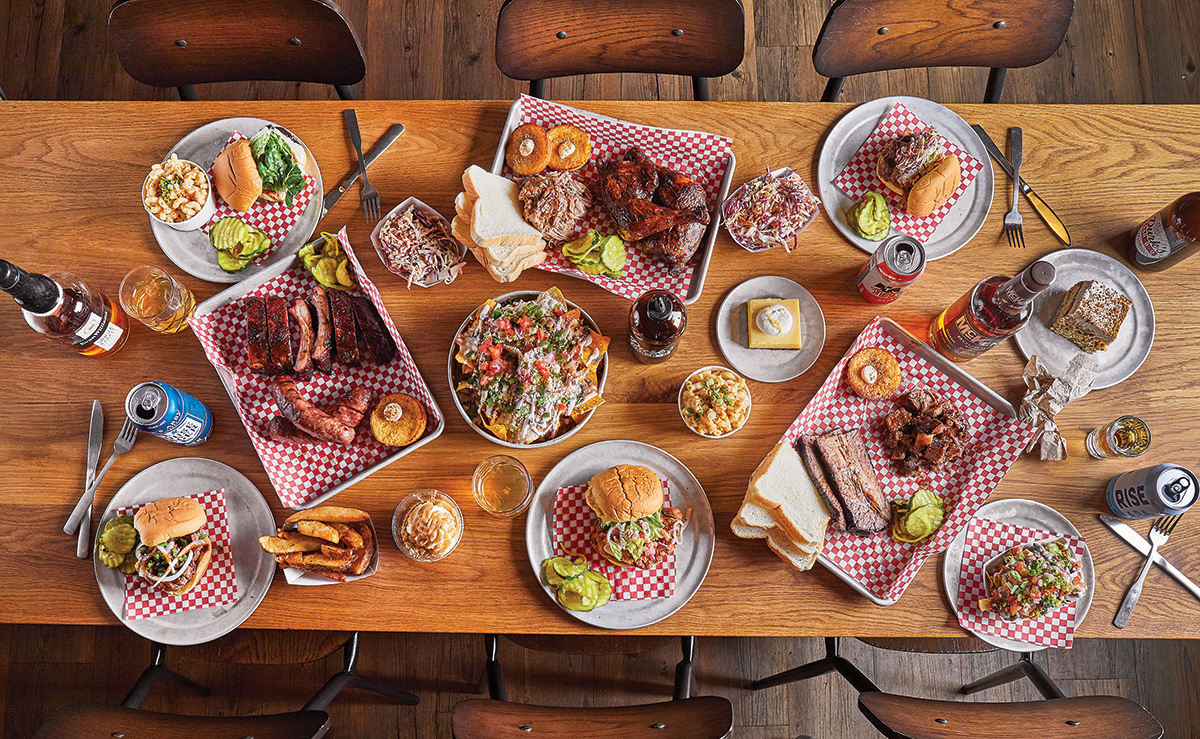 A barbecue spread at Durk’s Bar-B-Q in Providence. Photography by Angel Tucker.

12 to 24 hours before smoking: The briskets get a rubdown of salt and black pepper up to a full day before they go in the smoker. “I like to put the rub on and let it sit in the walk-in because it cures the meat and helps season it more,” Davis says.

5 a.m., three days after receiving meat shipment: Either Davis or Sean Bender, morning sous chef, gets the dry-rubbed dinner briskets in the smoker. Texas barbecue-style wood, post oak from Westport, Mass., is added to the fire every hour.

5:30 a.m.: Briskets smoke for three hours straight. “It’s getting a nice hard smoke, which should help it get that smoke ring — that pink you see around the outside. That helps get the bark going as well,” Davis says.

Between 6 and 7 a.m.: Racks of ribs go into the smoker and smoke for approximately four hours to be ready for the restaurant’s lunchtime opening.

9 a.m.: The chef monitors the brisket to see how the bark is forming, while also adding pork shoulders to the smoker. The breast is very lean while the shoulder is fatty. The breast will often be sprayed with apple cider vinegar. “There is a thick layer of fat over the top of the whole brisket, which keeps it moist during cooking [and soaks up the smoky flavor],” Davis says.

Noon to 1 p.m.: “If we get to the point where we have enough color on the outside of the brisket but the meat isn’t cooked all the way through, we’ll wrap it up in peach paper, which is a huge roll of butcher paper,” Davis says. This will preserve the bark but keep the meat cooking. At this point, ribs for dinner service are placed in the smoker and they smoke for about four hours.

4 to 5 p.m.: The dinner brisket is taken out of the smoker, and it must rest for at least one and a half hours before serving. “If you cook a steak for dinner, take it off the pan and cut it open immediately, the juices gush out,” Davis says. “You have to let brisket rest so all the juices redistribute throughout the meat.” The brisket is kept in a warming box until guests order it.

5 p.m.: The ribs for dinner service are taken out of the smoker and kept hot for guests.

5:30 p.m.: A guest orders brisket and it’s heated in the smoker, then sliced to order. “The second you slice it, it starts losing its quality. Everything that’s ready for that guest’s order will be prepared first, and the brisket is the last thing that’s sliced. We put a little finishing smoked salt on it. Then it goes out.”

*Get to Durk’s early to get your pick of brisket and ribs. The restaurant only makes a certain amount each day. Durk’s also provides catering for large and small events. 275 Thayer St., Providence, 351-2807, durksbbq.com