Our guide to the Ocean State's sweet and sticky barbecue scene.

By Jamie Coelho and Jamie Samons
With research assistance by Alyssa K. Anderson and Samantha Labrecque

Rhode Island may be best known for its seafood, but more and more barbecue spots are adding flames to the fire. It turns out we have a pretty legit barbecue scene, and it’s only getting better. Local restaurants are starting to put their own New England spin on the cuisine, adding fish and seasonal vegetables to the smoker. Just like Texas-, Carolina- and Memphis-style, it’s looking as if Rhode Island is creating its own ’cue category. 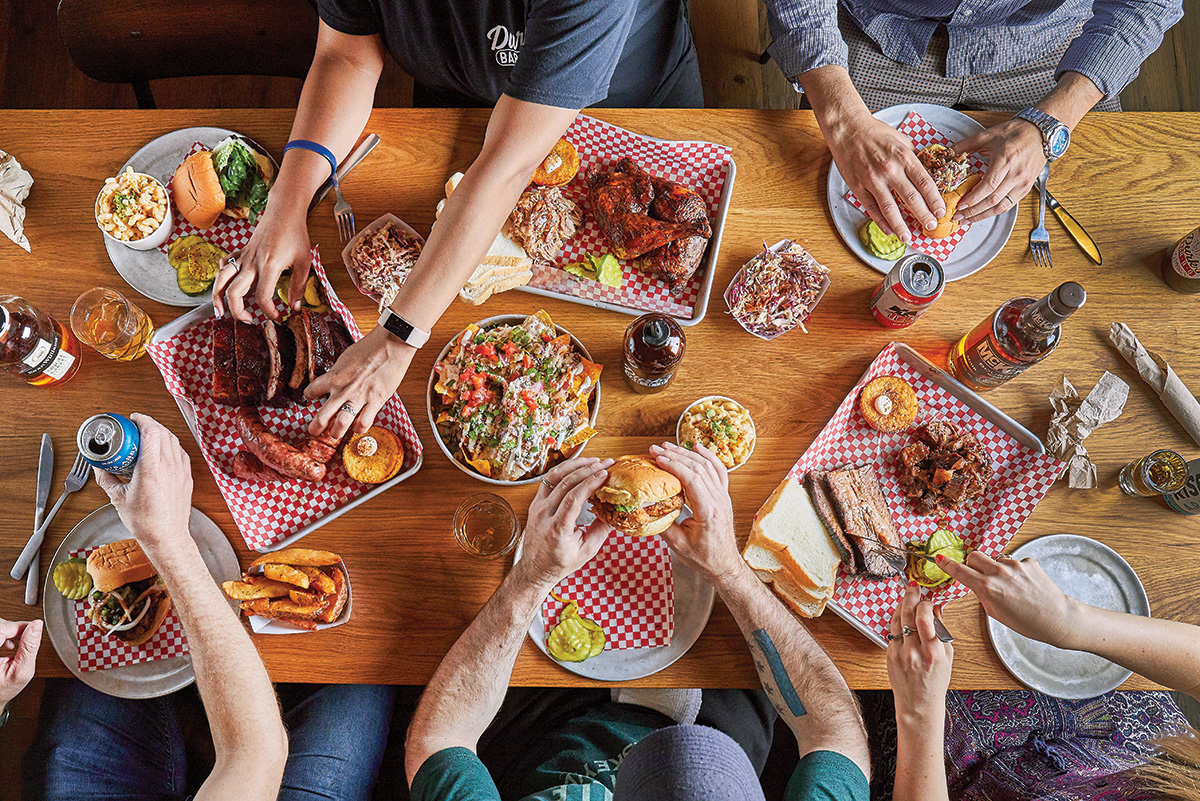 A barbecue spread at Durk’s Bar-B-Q in Providence. Photography by Angel Tucker.

Rogue Island Local Kitchen and Bar
While not specifically a barbecue restaurant, the spot focuses on some Southern specialties, using local ingredients as much as possible. The Providence Arcade restaurant’s pulled pork is smoked over hickory, served with house-brined bread and butter pickles and red cabbage, and topped with Cabot Creamery Co-operative cheddar and fried shallots on a buttery brioche bun. Hickory-smoked chicken wings come in a choice of apple habanero, bourbon barbecue, Korean and buffalo. Mac and cheese bowls include original with Vermont cheddar cheese sauce and buttery panko crust, buffalo bleu, lobster mac and Korean mac. Vegetarians can even go for the smoked and pulled spaghetti squash to get the flavor of barbecue in non-carnivorous form. 65 Weybosset St., Providence, 831-3733, rogueislandgroup.com

GottaQ Smokehouse BBQ
When deciding what to get, make it easy: Order all of it. GottaQ specializes in dry-rubbed beef brisket and pork ribs using its own mixture made from garlic powder, black pepper, chili powder and salt, available for sale at the restaurant. Meats are smoked overnight using oak and hickory in commercial indoor smokers or the trailer smokers, if they’re on the road. The ribs and barbecue pulled chicken are slathered with a Kansas City-style sweet tomato hickory mop sauce, the Eastern Carolina spicy vinegar or a mixture of the two for the sweet and spicy house sauce. Every meal comes with a hot and cold side and a mini loaf of cornbread. Side options include mac and cheese, collard greens, pit beans, brisket chili, Texas caviar with black-eyed peas and diced vegetables in a tangy dressing, cole slaw, potato salad and more. Don’t dismiss a piece of homemade pecan pie made from a 100-year-old recipe for dessert. 2000 Mendon Rd., Cumberland, 475-1296, gottaq.com; plus three food trucks and three trailer smokers used for public events, competitions and private catering

The Flatts
The Flatts is South County’s smokehouse, opened nearly two years ago by Jane LeBlanc and located at the Peace Dale Rotary. LeBlanc decided to take the plunge when the real estate became available and the town didn’t have anything like it. Order up a plate of ribs, pulled pork, brisket or pulled chicken, served with two sides and cornbread. The Flatts even picks up fresh fish from nearby Point Judith for the smoker. Vegans can enjoy smoked items like chickpea hummus and chili charred edamame topped with unflavored Pop Rocks. Family-style picnic deals include three quarts of pulled pork with three quarts of sides, including housemade mac and cheese, house cut fries, baked beans, coleslaw or mashed potatoes for the ultimate beach barbecue.
501 High St., South Kingstown, 789-3528, theflatts.com

Wes’ Rib House
The saloon-style barbecue spot has been a long time fixture in the Olneyville neighborhood of Providence since 1983, but the restaurant originally opened in 1973 on Broad Street. The dining room has recently been renovated and the bar boasts three flat-screen televisions, so you can be sure baseball is always on. Sticky sweet Missouri-style barbecue ribs are slow-smoked over a wood fire and each rack has a blackened char that reveals moist pink meat on the inside. Wes’ also has leaner baby back pork ribs and beef brisket, served with housemade cornbread, baked beans and coleslaw; you can always sub sides of mac and cheese or collard greens. (We dare you to start with the loaded bbq chips.) Eat at the restaurant, reserve the banquet room for a party or have Wes’s mobile unit come to you. 38 Dike St., Providence, 421-9090, wesribhouse.com

Bonetown Burgers and BBQ
This hardwood-smoked barbecue joint and food truck is the brainchild of Rich Cambriello, who started the Bonetown brand over six years ago, and executive chef Shane Caledonia, who runs the food truck. At the storefront, chefs make everything from scratch, including the pork chili as well as the various sauces for slow-smoked ribs and pulled pork. The brisket is dry rubbed and smoked for fifteen hours with a blend of hardwoods. “ ’Cue has been my private culinary passion since I was in my early twenties, so let’s just say a long, long time,” says Caledonia. “I was drawn in by my own love for real, hardwood-smoked barbecue and standing around an open pit all day drinking lemonade — or some of the extra beer from the sauce.” 39 Phenix Ave., Cranston, 270-0714, bonetownri.com; plus local food truck events

Little B’s BBQ
Jessica Martinelli is the only Rhode Island-based barbecue food truck owner who has her own family farm. Her dad, Frank Martinelli, runs Martinelli’s Farm and Charcuterie in North Scituate, and the grass-fed, free-range meats often make their way onto the menu. Little B’s is named after Jessica’s son, Benjamin, and she’s a single mom of three kids who was running her business as a one-woman show until she recently hired help. The travelling smoker trailer appears at local food truck rallies such as PVD Food Truck Events as well as at local breweries including Buttonwoods and Providence Brewing Company, where spent grain is often collected to feed the farm animals, bringing the business full circle. Little B’s is known for its Texas-style brisket made with a Southern dry rub, and barbecue sundaes filled with mac and cheese, pulled pork and brisket, and topped with coleslaw, homemade pickles and barbecue sauce. 528-7557, facebook.com/littlebsbbq

Three Sons BBQ
Three Sons BBQ owner Michael Antunes named his Cumberland-based mobile business after his three sons, ages six, eight and nine. He cooks up meats at local events and for private catered parties, including pig roasts at backyard barbecues. Antunes transports his Georgia-built Lang Deluxe Barbecue pit outfitted with a rotisserie, chargrill and smoker around the area. The barbecue pro can turn out ribs, brisket, pulled pork or a whole roasted pig. Three Sons is also known for its barbecue sundaes: a cup of barbecue indulgence filled with brisket, beans and pulled pork and topped with coleslaw and mac and cheese. The cherry on top? Drizzle as much extra barbecue sauce as desired. 741-9166, facebook.com/threesonsbbq1

Boru Barbecue
Padraic Keane moved to Rhode Island from Ireland with his wife and became fascinated by American barbecue, studying types of wood that are used, optimal cuts of meat and smoker science. He took a ten-week welding course at the Steel Yard and built his first smoker, and then got really serious by ordering a custom-made smoker from Georgia for the business. Boru puts a Rhode Island spin on barbecue by procuring local ingredients for each feast, including fire-roasted seasonal veggies, whole-roasted local pigs, house-brined pickles, brisket that’s smoked over eighteen hours and more. borubbq.com

Boneyard Barbecue
Boneyard Barbecue’s Ashaway location is on the way to the beach, but since we must wear bathing suits there, it’d be wise to stop on the way back. The family-friendly restaurant boasts multiple televisions to tune into sports, as well as a pool table and an outdoor mini golf course and driving range. Order your rack of ribs or buffalo wings with one of more than sixty sauces ranging from Dragon’s Breath (Buffalo sauce infused with black pepper) and Spicy Mango BBQ to Bacon Bourbon and more than a dozen dry rubs. Just keep in mind that ribs are dry-rubbed and the sauces are served on the side. 15 Frontier Rd., Ashaway, 377-8000; 2247 West Shore Rd., Warwick, 736-0404; 540 Central Ave., Seekonk, Mass., 508-761-6854, boneyardbarbecue.com