Anthony Giordano's wood-fired pizzas are an edible symbol of cultures colliding to create something incredibly delicious. 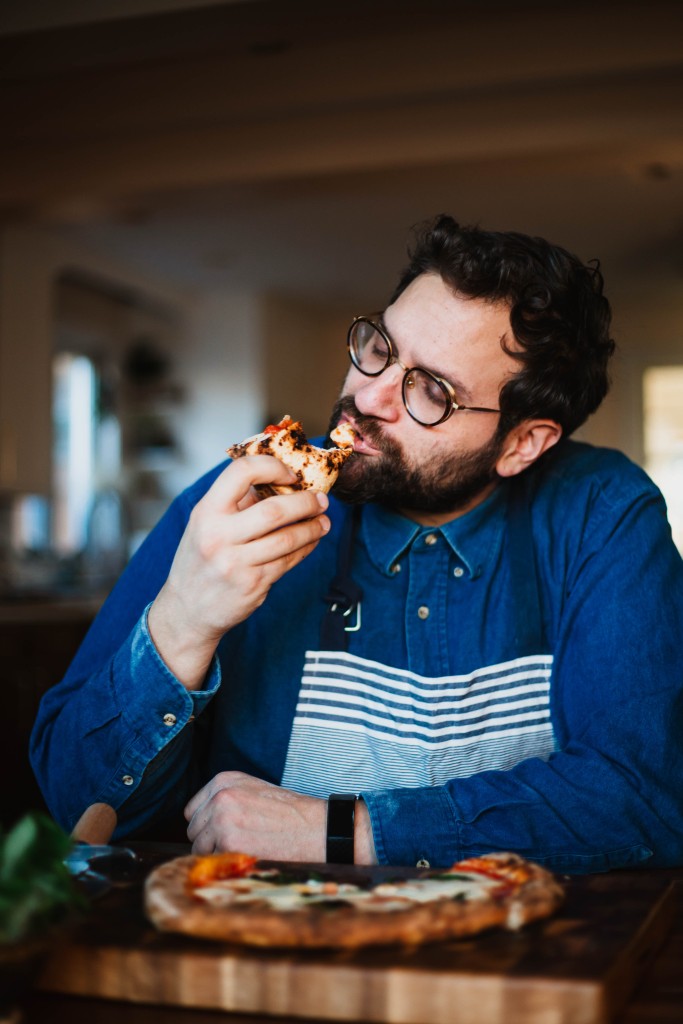 Pizza is way more than just pizza to Anthony Giordano, owner of Anna’s Vesuviano mobile pizza trailer. It’s an edible symbol of cultures colliding to create something incredibly delicious. And even though his family comes from Naples, Italy, he says we shouldn’t just credit the Italians for inventing pizza.

There’s one specialty pizza on his menu that is topped with Middle Eastern za’atar — a spice blend of dried herbs that often includes oregano, thyme and marjoram with sumac and toasted sesame seeds — and this pie is symbolic of what pizza means to him.

“Pizza is Arabic,” he says with conviction. And it’s something to think about.

“It is a Bedouin traveling Arabic food that came to the levant…There is a bread called khubez, which is an Arabic bread made with a starter,” he says, adding that people traveling by foot made flour from durum wheat to produce the flatbread. “There are pizzas that look just like the pizzas we eat here, except that you may have seen them at Piemonte.” He’s referencing the Providence pizza spot’s Kurdish pizza made with roasted potatoes, onions, red peppers, tomatoes, garlic, parsley and sun-dried chilis, served with fresh lemon. 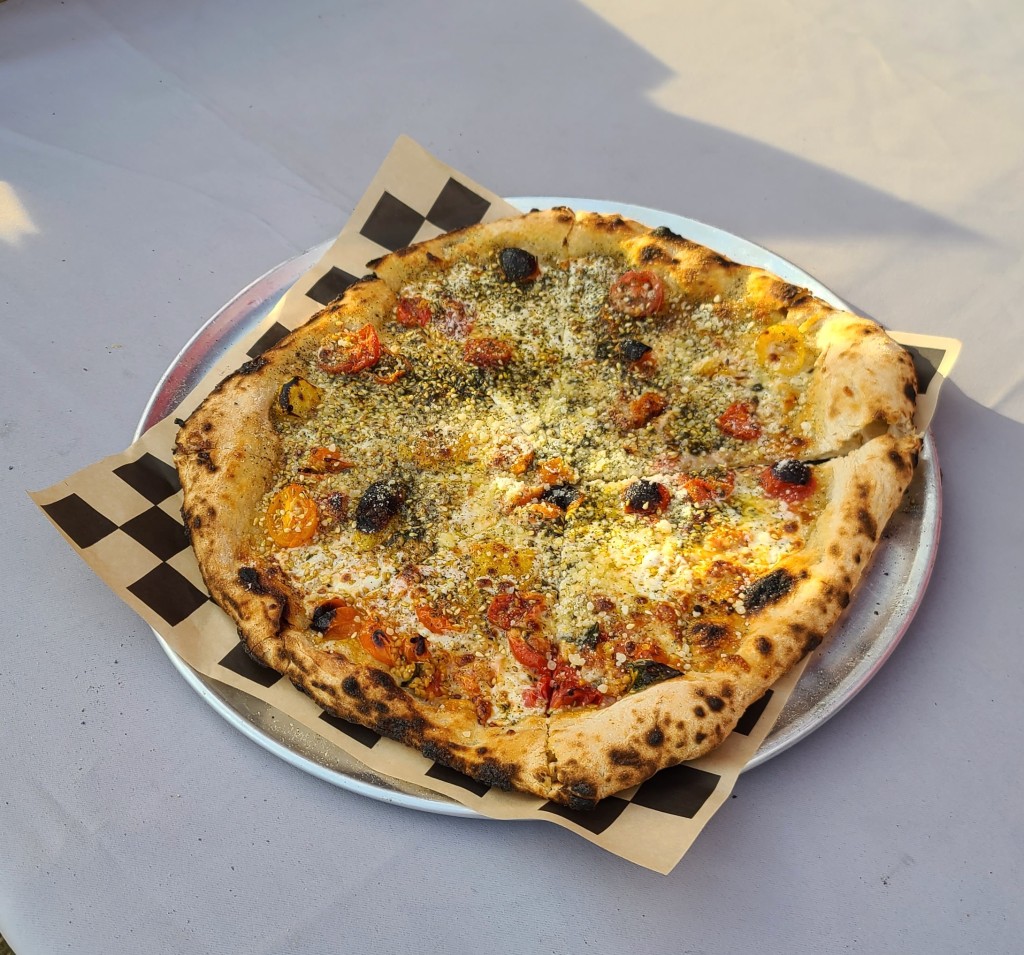 The pizza from Anna’s Vesuviano that is topped with za’atar. Photo by Jamie Coelho.

Giordano believes the Middle East played a part in how pizza really came to be. It involved transporting goods from Jordan, like wheat, and tomato seeds coming from South America, he says, both coming into Naples, Italy, from other countries and regions of the world by ship at ports. He explains how he studied archaeological anthropology in college to learn more about the origins of ingredients and culture. “Tomatoes are not from Europe. They are from the new world, specifically South America,” he says. “People have been putting something on top of a leavened Arabic bread for millennia, for 10,000 years. It’s not something people talk about and it’s something that drives me every day. I’m striving for the truth.”

While he includes the za’atar on one pizza, the rest of his mind-blowing, wood-fired pies focus on local ingredients. One might try to classify it as Neapolitan style, but it’s not, because Giordano takes his own spin on things using farm-sourced produce and locally made fiore de latte cheese from Connecticut to top his pizzas, just as Italian chefs tap into what’s available around them to craft the most flavorful, simple dishes. He’d much rather purchase tomatoes from Rhode Island’s bountiful farms than order cans labeled San Marzano. There are also differences between his dough and the dough specified for Neopolitan pizzas, which uses flour, water, yeast and salt with a room temperature rise. Giordano’s recipe involves a spelt sourdough with olive oil, and it rises for forty-eight hours while refrigerated.

Pizza is a form of his self-expression. “The most important thing is that food and cooking is for me the only non-verbal activity I do that actually expresses the way that I feel; If I’m sad, if I’m happy,” Giordano says. “ I think about things every day and I have to repress myself from putting things on my menu because it’s too much.”

Giordano taps into his fine dining experience and models his cooking skills after how food is presented in Italy, using simple ingredients gathered in proximity. The business is named after his grandmother, Anna, who came from Corbara, a little Italian village near Mount Vesuvius, where the famous San Marzano tomatoes grow that make Naples synonymous with Neapolitan pizza. “My grandparents emigrated here from Naples in 1918,” he says. “My grandmother, Anna – whose name was actually nanianella but no one could pronounce it – was an incredibly progressive woman in the ‘20s, ‘30s and ‘40s in Brooklyn.” 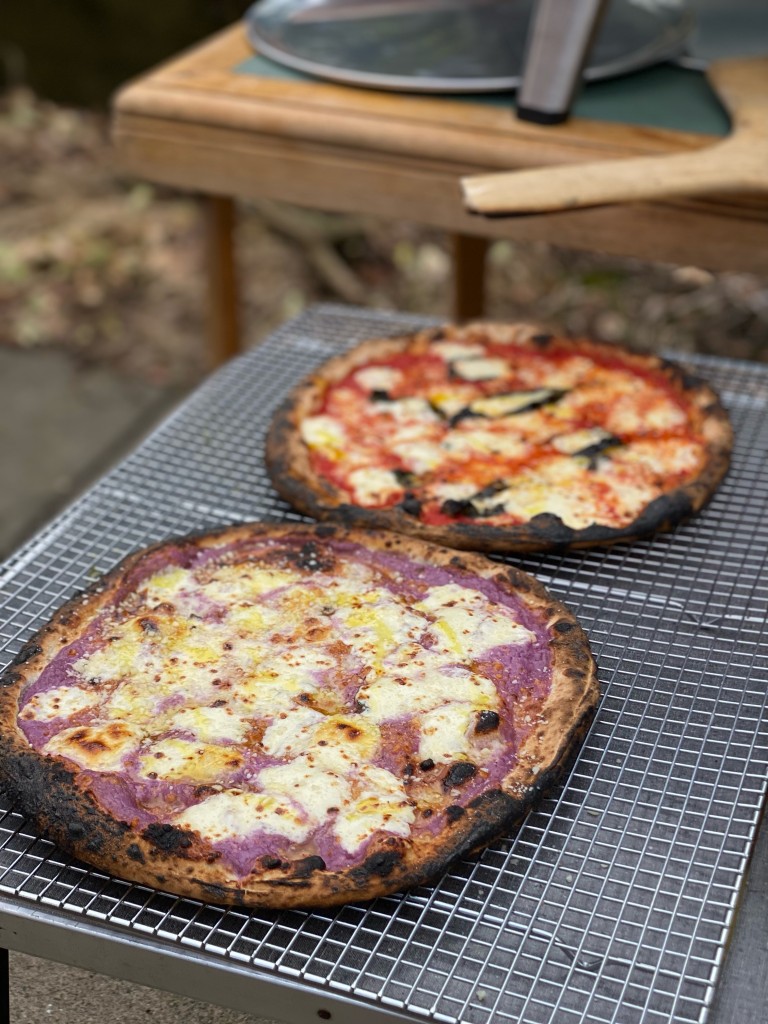 Giordano recounts how his grandmother spoke English, Italian and Yiddish, and would help other Italian immigrants find their way in New York City by helping translate languages. It all stemmed around a Brooklyn pizza shop, Totonno’s Pizzeria in Coney Island, which still exists, where Giordano spent a lot of time as a kid growing up with his five siblings, including two sets of twins — two older brothers, and two younger sisters — as well as another younger brother.

“The original pizza maker and proprietor couldn’t speak English. My grandmother brought Anthony to the bureau in downtown Brooklyn and got him his license,” Giordano says. “From that point on, that’s where my parents got pizza. It’s absolutely one of the most influential things in my life.”

Giordano spent time shadowing his older brother, who is also a chef, in kitchens in New York, and grew up loving everything about food. His best friends were Palestinian and he loved eating meals at their homes.

“I grew up not with predominantly Italians, but Palestinians,” he says. “They’ve been a huge inspiration in my life because I would go to their houses for dinner and we’d have all these dishes with lamb and rice and I named one after a friend of mine, my best friend, from Jordan. He brought the za’atar from Jordan, so I did that and finished it with lemon and tomatoes.”

When he thinks about pizza on his menu, he realizes he is making a cultural statement about his childhood and what he learned growing up. “Pizza is a very non-confrontational medium that allows people to gather and sit down and share something while discussing a topic that to me is very important and underrepresented and under-respected,” he says.

He credits his team for helping make the pizza better than it ever could be if he was doing it alone. “In the end, you can’t get better unless you hire people who are better than you,” he says. annasvesuviano.com 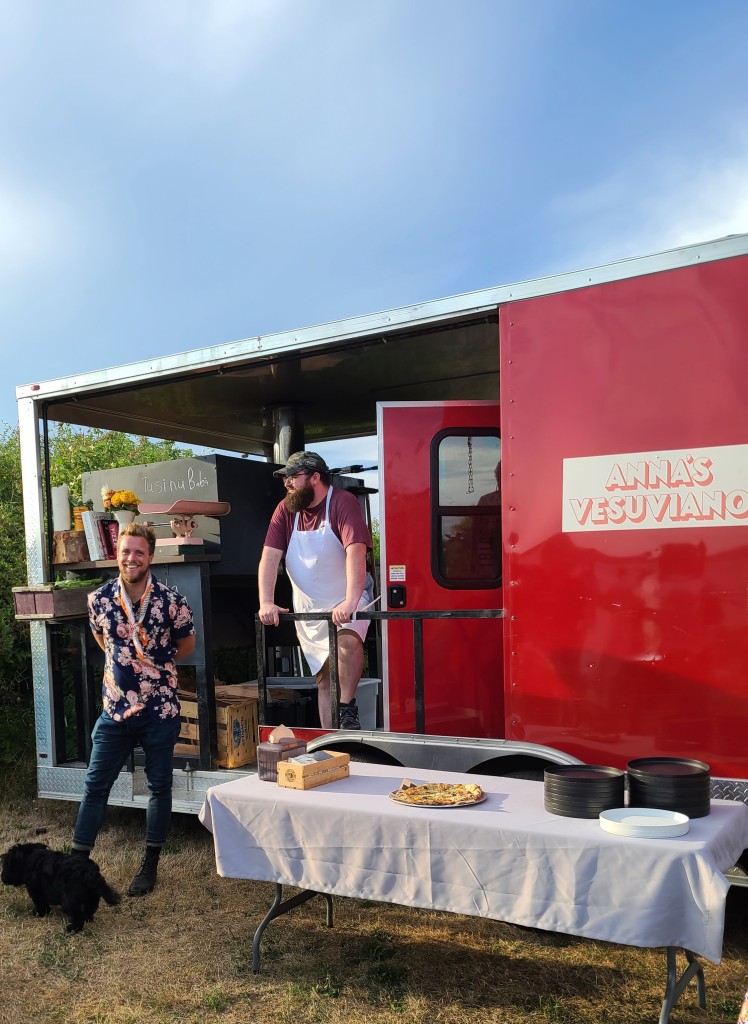 The team behind Anna’s Vesuviano. Photo by Jamie Coelho.

This weekend, the Anna’s Vesuviano team will be at the Narragansett Brewery in Providence on Nov. 18, 19 and 20. They also have a special event called “A Night in Caserta” on Nov. 29 at the Burgundian in Attleboro. Chef Anthony will serve an Italian-style roast with all the fixings plus pasta, wine, beer, dessert and much more for $85 a ticket.

Where to Get the Best Pizza Strips in Rhode Island