The 100 percent volunteer-run publication features adoptable pets in feature stories and fashion photo shoots with information on how to give the animals furever homes. 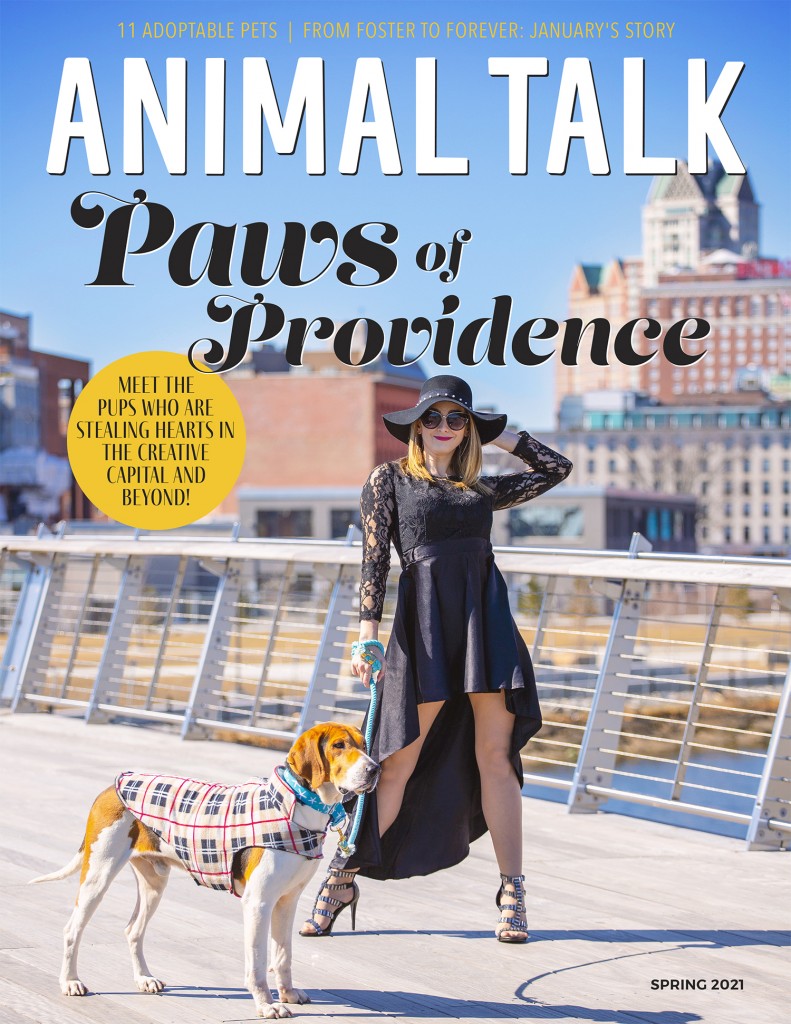 Animal Talk is a new magazine in Rhode Island starring adoptable pets. The digital publication was created by founder and animal lover Karen Kalunian with art director and graphic designer Meaghan Susi (who is also the Art Director at Rhode Island Monthly). The magazine features adoptable pets, including dogs and cats, in feature stories and fashion photo shoots with information on how to to give the animals furever homes. “It’s a ‘one stop shop’ so to speak, where with just the click of a page you will see beautiful photos of adoptable animals taken by local photographers along with short bios about each animal,” Kalunian says.

Kalunian has spent ten years in animal rescue, and she’s always loved animals. When her daughter, Kim Kalunian — who you might know as an anchor and reporter for WPRI Channel 12 news — directed the play Annie as a kid, Karen Kalunian thought it would be great to find an adoptable dog to play Sandy in hopes of finding it a good home. They found a dog named Buddy from the East Greenwich Animal Protection League, and sure enough, someone adopted him from the show and Karen’s love for supporting animal rescues was born. She’s always shared info about adoptable animals on the radio and now she has a whole magazine that’s dedicated to them.

Volunteers Kalunian and Meaghan Susi decided to team up to create the publication together along with other supporters. Susi had already been doing pro bono photo shoots of adoptable and foster pets from EGAPL Heart of RI Animal Rescue League, so they decided to use the photos in a publication where they can share stories about each dog and cat.

“The idea started as a high fashion photo shoot with shelter dogs. I wanted to showcase adoptable animals outside of the shelter environment and thought they deserved a chance to be supermodels, too!” Kalunian says. “Once I shared my vision for the shoot with Meaghan, she had the idea of creating a magazine cover with the finished photo, which then turned into us creating a complete online magazine. We thought why not share multiple adoptable animals all in one spot to make the adoption process easier to navigate?”

Susi is also an animal lover who adopted her dog, Paisley, from Friends of Homeless Animals in 2015. They planned the shoot for the Pedestrian Bridge in Providence, starring an animal shelter volunteer with various dogs that are up for adoption.”The setting is so beautiful with the city skyline and it’s a great place to bring the pups!” Kalunian says. “We really had a great system in place for photographing each shelter dog one right after the other and we also gave the model a chance to make quick changes in between each shoot. Many people walking on the bridge stopped to watch and meet the pups. It was a great time for everyone involved.”

The publication is a 100 percent volunteer operation from the photo shoots and design to the writing and copyediting. “Meaghan and I have known each other for years, we both have a huge love for animals and we work well together. She is the creative person, and she always understands my vision and makes it happen,” Kalunian says. “I supply most of the written content but there are also many other people who helped make the magazine possible including photographers, videographers, volunteers and Animal Talk supporters.”

Whether you want to foster, adopt or just be cheered up by cute animals, you can check out the first issue of Animal Talk here! They plan to shoot a new cover on a quarterly basis, but might choose to do more due to the popularity of the first issue. They are constantly updating the info on each adoptable pet and adding new ones, so check back often.

There’s also a Spring Snuffs and Snuggs Mini Photo Shoot session with photographer Meaghan Susi on Friday, April 16 from 2-5 p.m. and Saturday, April 17 from 9 a.m. to noon at Wave Federal Credit Union at 480 Greenwich Ave. in Warwick. Packages are $25 for three photos and $35 for six photos. A portion of the proceeds go to We’re Here for the Dogs, a nonprofit raising funds for local rescues and shelters. Book your spot by emailing animaltalk1920@gmail.com. Spots are limited and pre-payment is required.

Buppy Pets Makes Tasty Treats for Dogs and Their Humans