A Former Barge Is Set to Become Warren’s Newest Restaurant

The new Chomp location on Water Street, expected to open in December, has a nautical past that pays tribute to the town’s roots as a shipping center. 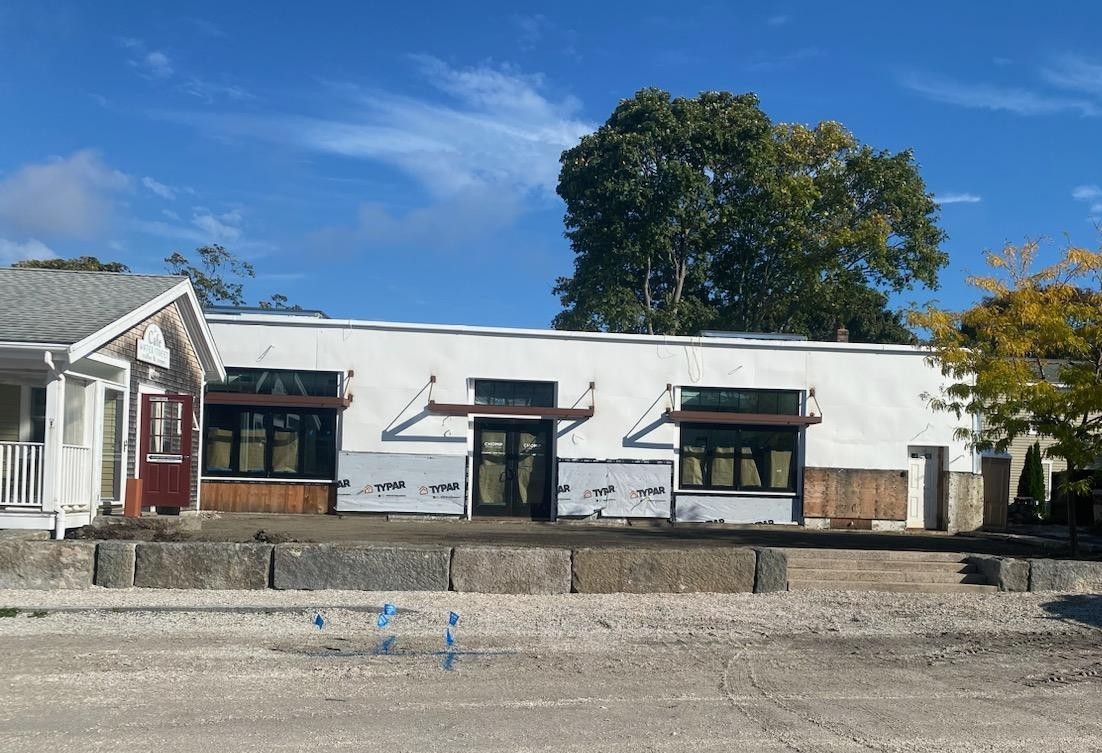 The new Chomp Kitchen and Drinks, visible here behind Cafe Water Street in Warren, is expected to open in early December. (Photo courtesy of Sam Glynn)

Rhode Islanders love the water. So much, in fact, that a Warren restaurant owner is betting a former barge-turned-storage facility is the perfect location to attract diners looking to chow down on some burgers and brews.

Sam Glynn, the owner of Chomp Kitchen and Drinks, purchased the former storage facility at 279 Water Street last year as a new location for his flagship restaurant, which opened on nearby Child Street in 2013. Glynn says the move — about a mile — will allow the business to operate in a larger space with waterfront views.

“We thought it was a really good opportunity to get in there, redevelop the property and move our restaurant from Child Street to Water Street,” he says. “We outgrew our space here on Child Street within about three or four months of opening nine years ago. We never really had the desire to move, but when COVID happened, we were like, ‘No one’s going to ever look to eat in a small restaurant anymore.’”

The property has three structures, including a metal building that was once a floating barge. An entry in the National Register of Historic Places records how the metal building was first used as a storage facility on the site some time around the 1950s. Prior to that, the parcel and surrounding area were a coal yard owned by the Staples Coal Company in Taunton, Mass. The coal yard operated until the 1950s, at which point the property became known as the Harbor Marine Complex.

“There’s conflicting stories about whether (the barge) was turned upside down or whether it’s right side up. We’ll go down the middle and say we don’t know what it is,” Glynn says.

Davison Bolster, a local preservation advocate and chairman of the Warren Voluntary Historic District Commission, says the property’s history with the marine trades goes back to colonial times. In the 1700s, the patch of waterfront was the site of two wharves that allowed ships to tie up for loading and unloading cargo. Near the entrance to the street, a marker established by the Warren Middle Passage Project offers insight about some of those voyages: In 1789, nearby Collins Wharf was the launching point for a transatlantic slave voyage, two years after the General Assembly banned local residents from participating in such voyages. 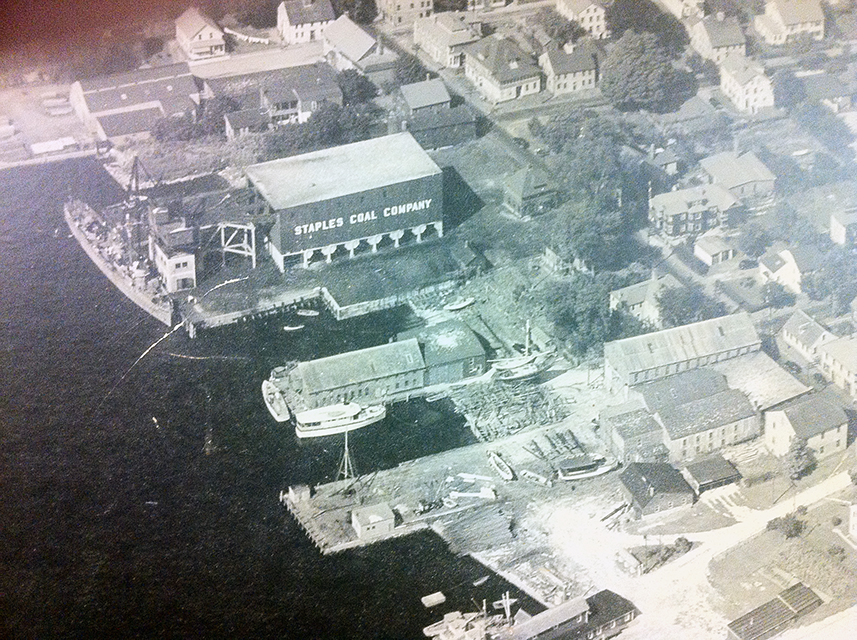 This photo, an inset of a larger photo that hangs in Warren Town Hall, shows the new Chomp site when it was owned by the Staples Coal Company. (Courtesy of Davison Bolster)

The site eventually became a coal yard and later was purchased by the Harbor Marine construction company. Bolster, who was involved with an effort to save the waterfront from condo development in the early 2000s, says the company brought two barges to the site: the one that will become Chomp and a second later demolished to make way for Trafford Restaurant. Both of them, he says, were former Navy storage barges whose tops were cut off to use as metal buildings.

“It’s one of the fascinating things I love about Warren is that the layers or history are so rich and multilayered on any given spot,” he says.

During construction, Glynn says, several local contractors visited the property and shared stories about the building being used to store everything from fireworks to cows over the years. At the time he purchased it, he says, it was full of movie theater equipment and memorabilia that belonged to the former owner.

“We did a lot of work to get it down to the studs, and then basically had to build a building inside of it. It’s all brand-new construction on the inside,” he says.

The renovations include a new kitchen and a bar three times the length of the one at Chomp’s current location. The space, Glynn says, will have a “beer hall vibe.” 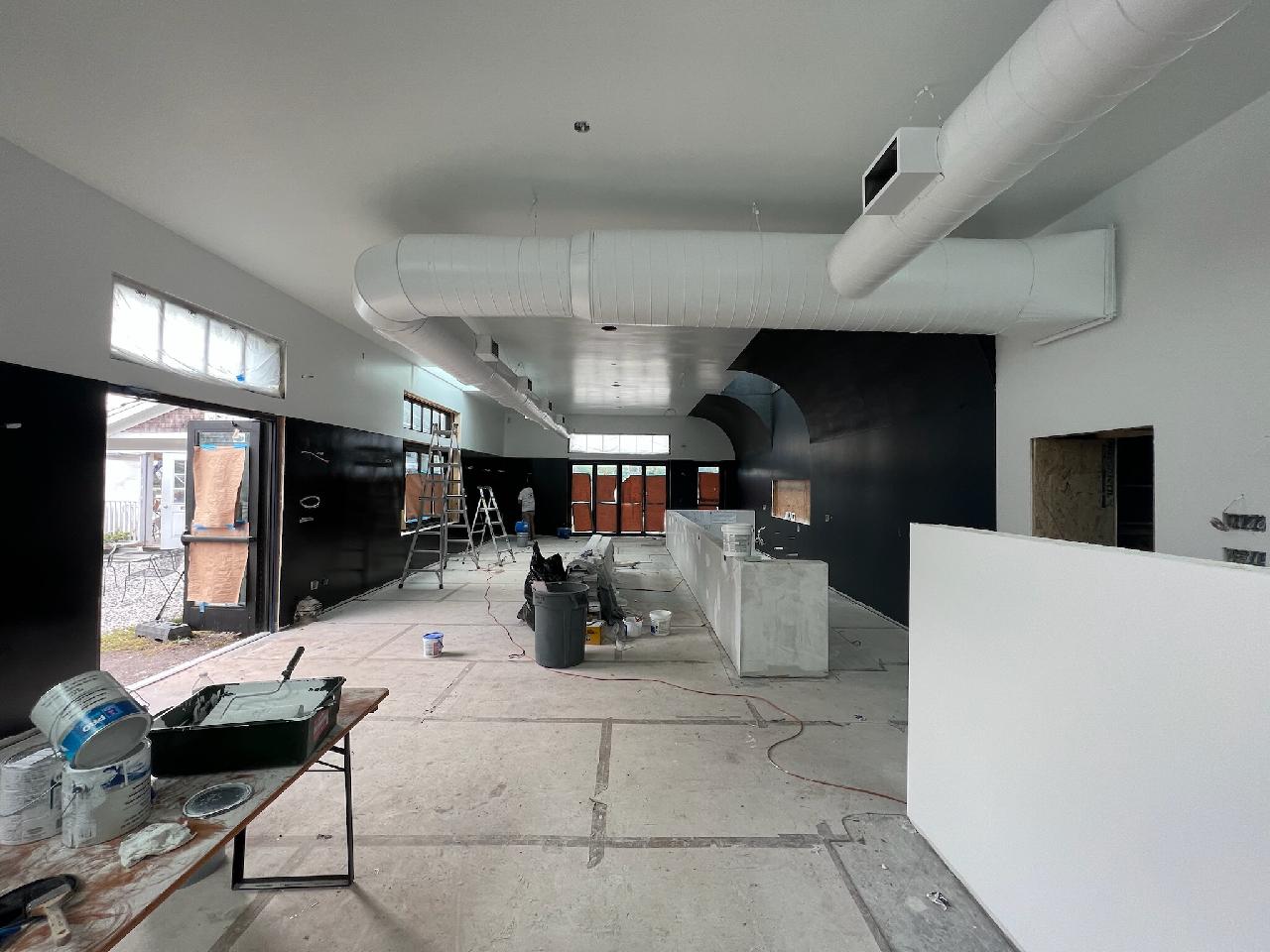 The interior of the new location mid-construction. (Photo courtesy of Sam Glynn)

“It’s a perfect complement,” Glynn says about the cheese business. “We had a ton of people inquire about that property, and I was really deliberate in what we wanted there.”

As for the barge, a recent discovery in New York might provide hints to the date of its construction. One of the project’s designers recently spotted a similar barge at the South Street Seaport Museum while visiting Manhattan. Based on the nearly identical layout of the two vessels, Glynn suspects they may have been built around the same time. 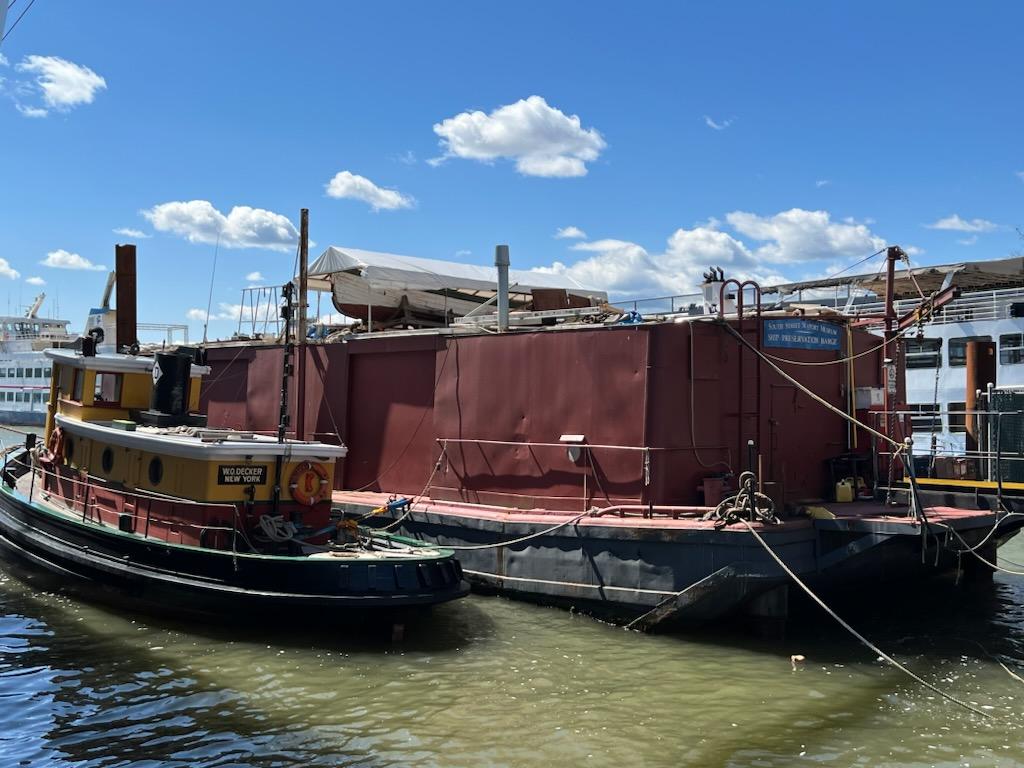 The upper level of the maroon barge pictured here, part of the South Street Seaport Museum in New York, bears a similarity to the barge on Water Street in Warren, leading to theories about its origins. (Photo courtesy of Sam Glynn)

“It’s very unique, and it’s got a really cool story to it,” he says. “We nicknamed it the ‘burger barge’ for the moment. I don’t know if we’ll make T-shirts out of it or we’ll make a really ridiculous rectangular burger out of it.”

Glynn says they plan to close the Child Street location shortly before opening the new one and are looking for another business to take over the old space. After more than a year of planning and a months-long buildout, he says, he’s looking forward to welcoming customers to the new Chomp. The restaurant will join several others that have made their home in the bustling neighborhood over the past decade.

“It’s a calculated risk, but the building is always one that we admired, and we’re really trying to get it to a point where we can celebrate the history of it and it’ll be a nice complement to the rest of the downtown area,” he says.

Editor’s note: This story was updated on Oct. 27, 2022, to reflect new information about the property’s history.

The Former Jamestown Ferry is Now a Restaurant in Maine