What Remains When Alzheimer’s Takes Over?

A local writer recounts her mother's journey with Alzheimer's disease and the love that shines through even as darkness takes hold. 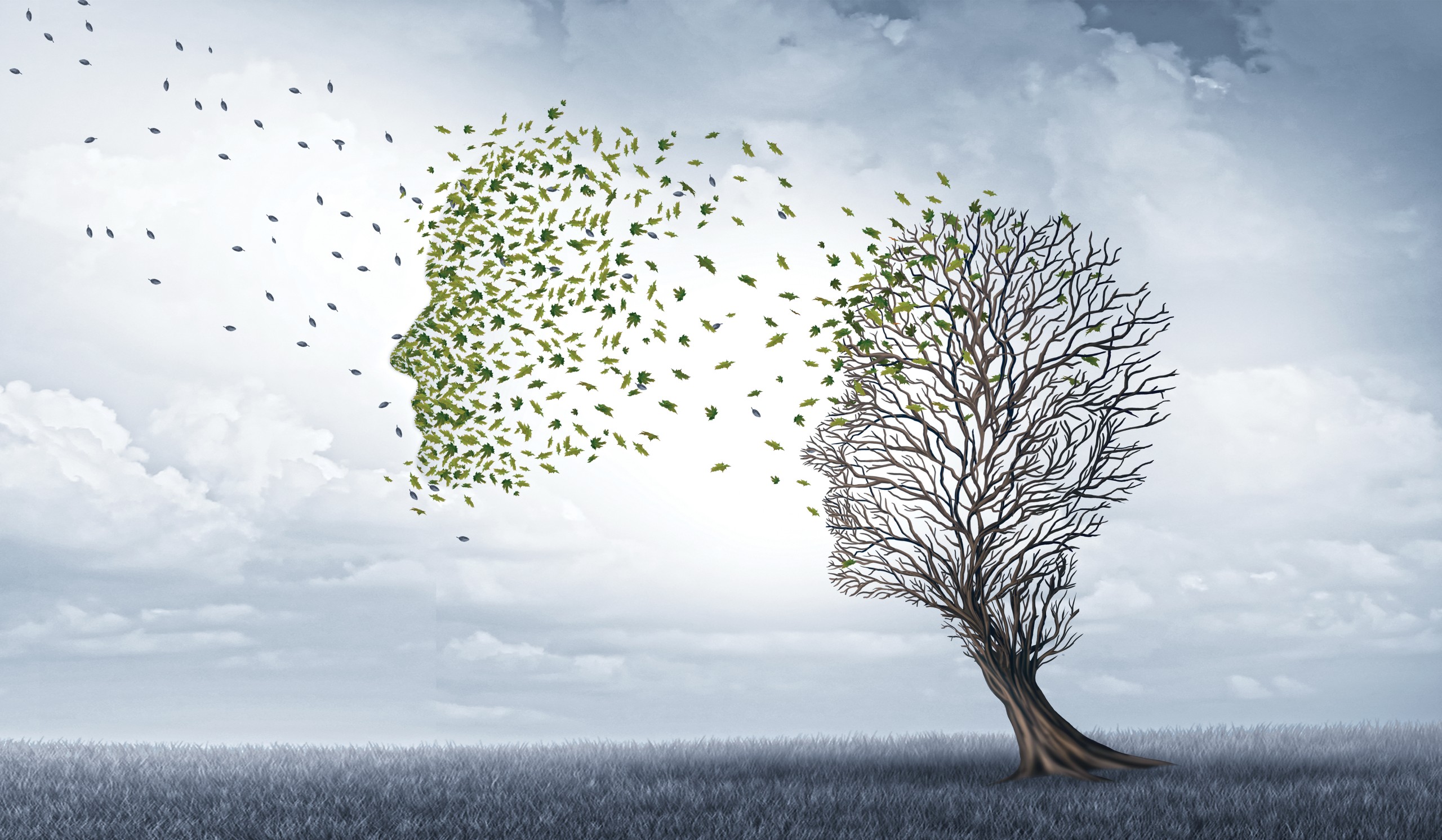 John entered the room and my mother lit up at the sight of her man. She tilted her head back to receive his in a lingering, open-mouthed kiss. A lover’s kiss. I looked for some neutral place to park my eyes. Ophelia, my mother’s former housekeeper and aide, let loose a hearty laugh.

We were visiting my ninety-year-old mother in the facility where she has lived for more than a year. John, eighty-eight, had been in the hospital with a bladder infection and not seen her in a month. A large and sedentary man, John could barely walk, and seems determined to ride out the rest of his life in the expensive hydraulic lounger she had bought him as a present. My mother, in contrast, is a tiny bag of bones, shrunken to the point that her dentures no longer fit, so she does without them.

John, her live-in boyfriend for more than twenty years, is my mother’s anchor, and when Alzheimer’s has cast your mind adrift, you need one. She was diagnosed in 2016, and that summer, she turned her anger-fronted fear on the world. My mother had been a nurse at a well-known Baltimore nursing home — she knew exactly where she was headed.

Even the best old age is a succession of terrifying losses. Your senses dull or disappear altogether. The olfactory nerve takes no notice of the rotting garbage in the kitchen trash can, night-driving becomes a superpower, reaching the toilet in time feels like victory. With each passing year, bodily failures chip at the crumbling edifice of your independence. And the funerals rain down like autumn leaves, until you are left with the last stubborn or genetically blessed peers who have stayed, like you, fast to the tree.

You can no longer pretend that you will never die.

Alzheimer’s erasures are more profound. The brain cells’ proteins clump and tangle, disrupting vital functions. These abnormalities spread slowly, and then rapidly, throughout the shrinking brain. You lose your short-term memory, your ability to find your words and eventually, coherent thought. You lose that which is you.

My mother was a very funny person who wielded sarcasm like a machete. She was also kind, loving, intensely social and above all else, a helper. There wasn’t a kid she would not scoop up and adopt as another grandchild, no dog or cat that wouldn’t fit on her lap. There were no strangers in a restaurant, just new friends who had ordered something that looked really delicious. When people were at their most troubled, they reached out to my mother, knowing that she would not judge them, or turn them away. We grew up in a household that welcomed all. My mother employed a straight more-the-merrier strategy for social occasions. There was no party for ten that couldn’t be made better with the addition of ten or twenty more people.

She didn’t really get Facebook, but then, she didn’t need to. Long before Mark Zuckerberg was born, my mother had a network second to none. Every weekday evening after dinner, I remember my mother making school lunches, on the phone with her friends, catching up on the day’s events. I can still see the long telephone cord sweeping back and forth, brushing the floor like a jump-rope — which, as my mother would tell you, she was once very good at.

And now, as I walk beside my mother on her last journey, what interests me is what remains. And for her, it is love.

My mother looked at John for two beats.

“We haven’t been together for a long time.”

Ophelia was moved. “I wish I had someone to love me like that.”

For about three months, on two separate occasions, my mother stayed with my husband and me in Rhode Island. She had been living on bananas, Boost and chocolate chip cookies, and her weight had dropped to double digits; John was frightened and overwhelmed.

Whenever someone in a difficult caregiving situation, like caring for a medically fragile child or a spouse with a stroke, spoke about how grateful they were for the experience, how it broadened them, or taught them about the important things in life, I would nod in agreement, thinking: “You’re lying.” Or, “If you say so, but I certainly never want to learn that!”

Now, having learned it, I know that it is true.

I spent those months trying to juggle my job, my family, my house and my mom. The days began with a quick trip to the senior center to sign her up for the morning fitness class before all the spots were taken, come home and get my mother showered, dressed and breakfasted, and ferry her to the senior center. That took two hours. The days ended with a frightening climb up the ten treads of my staircase to the guest bedroom, where I’d fight with my mother to take out her dentures so that I could clean them, put in her eyedrops and tuck her into bed. In between, I’d try to tempt her appetite with favorite foods, cut into doll-sized portions. I’d drag a chair into the bathroom to blow-dry her hair, salon-style, run loads of laundry and check and re-check on her in the den as I tried to work.

It may sound odd for a Jewish person to say, but sometimes, in those moments, I felt a little like Jesus washing the feet of his disciples — humbled by the opportunity to serve and honored by the trust of another person granting you the intimacy of slathering their dry, purple skin with Nivea. The philosophers say that there is no love — only acts of love. Snapping clean sheets over a previously soiled bed, warming pajamas in the dryer — there is love to be wrung from easing another human being’s discomfort, even if it is faint and fleeting. Other times, it felt exhausting and impossible. And I don’t know if I would have felt it at all were I doing this day after day with no endpoint in sight or if our past relationship had been contentious. (Certainly, plenty of people do.)

“You were losing your mind,” my sister Debbie reminds me.

Mom returned to Baltimore a few pounds heavier, with some new clothes from a trip to the mall we managed and a new friend from the senior center. These inches of gain didn’t last. Even with Ophelia coming in every day to cook, clean and help my mother with the tasks of daily care, their little troop of three was losing the war against advancing brain disease. My mother had become so physically frail that the six steps separating the main floor from the bedrooms and bathrooms had become a mountain. My siblings and I agonized over the next inevitable move. What would happen when my mother was physically separated from John? She still loved to climb into his lap and tuck her body under the refuge of his arm. COVID had just begun its sweep through the nursing homes. Moving her into a facility felt like a death sentence.

By the summer of 2020, we could no longer ignore the impending disaster of a fall and a broken hip. We found a place — far from her home, but conveniently five minutes away from the neighborhood where John would be living with his daughter. She had been a hospice nurse and vouched for the small, assisted living center’s cleanliness, home-cooked food and attentive care. Eventually, my mother became habituated to this new place and routine. John, who has been beset by his own health challenges, visits twice a week.

I make the trip to Baltimore one weekend a month, and I see that love. I climb into her easy chair and we cling to each other, reveling in the power of human touch. Sometimes, I take my mother’s old neighbor and her new puppy. Sunny scrabbles onto Mom’s lap and licks her face. She laughs as she protests. The aides are Latinx immigrants who accept my mother’s hand kisses and return her hugs as if she was their own bisabuela. They like to wheel her to the kitchen door, where she can immerse herself in their cheerful bustle. My mother still wants to be in the middle of things. She regards “the girls” as friends and co-workers. Occasionally, my mother tells me that she wants to take care of them — give them money, or a gift in appreciation. See? Love.

Should my mother live long enough, Alzheimer’s will steal everything from her, including basic reflexes, like the ability to swallow. But for now, I hold on to what remains.

I have spoken to my mother almost every day for most of my life, and that is still the case. She suffers serious aphasia, so we don’t have conversations in the conventional sense. Sentences proceed hopefully, with a noun and a verb. But the object tumbles through the clogged tunnels of her mind and comes to rest in a random place, like the reel of an old-fashioned slot machine. It could be an actual word mangled by the recalcitrant muscles in her mouth, or it could be gibberish. Few thoughts get completed. My brother Michael once reported that he had spoken to her for forty minutes on the phone.

“Really? Forty minutes?” I said. “What did you talk about?”

Our daily chats usually last about five minutes. I use them to gauge Mom’s mood and energy. Sometimes they open with a bright “Hi babe!” I ask her how she’s doing, and if she is working today. The state of the weather once closely tracked her attitude, but she can only go outside when it’s nice and warm, so that correlation has fallen away. She can’t grapple her mind onto another’s experiences; prattling on about life doesn’t do much to fill the void. There are times when she is distraught that she has no money or house (she has both), or by the persistent delusion that her father was murdered (he died of a heart attack). Worse are those flashes of realization about her reality. Recently, things went dark as my mother struggled to express how diminished she has become.

She accepted my counterargument, or she’d already forgotten her despair. Our call ended with calm restored.

The very best interactions follow a normal arc: Greetings are exchanged. Then my mother tells me an incomprehensible story of things she imagines she is doing. The experts advise loved ones against correcting an Alzheimer’s patient’s fantasies — they are real to them. Your job is to go with it — or, as they say in improv, always “say yes” to the premise. And, honestly, given the current state of affairs, a conversation about make-believe events would be refreshing. Alas, I rarely understand what she is trying to tell me, so I’m confined to responses such as “That’s great!” “She did?” and “You’re kidding me.” We close with my promise to call her tomorrow.