URI Caters to Military Vets with This Special Program

Military veterans can acquire the tools for making it in the civilian world.

Marland Chang, as president of the Student Veterans Organization at URI, gives a rousing speech about the SVO. “We want to educate the rest of the student body about our presence here, our contributions to the university,” he says. “We have a lot of experience to share with these eighteen- and nineteen-year-olds.” Military personnel, he says, are trained to fight and they are expected to rise to any challenge. And that includes going back to school.

Born in Kansas, Chang got his degree from Wichita State University in music and graduated in 2010. In 2007, he joined the U.S. Army Reserves. He originally hoped to join an army chorus; thanks to the mysterious ways of the military bureaucracy, that never happened. He transferred from Kansas to North Carolina in 2010, and deployed to Afghanistan in 2008-2009 as a financial management tech. (Soldiers still have to get paid.) He came to Rhode Island in 2014 thanks to his wife, who teaches oral communication and public speaking in the Theatre, Dance and Film Department at Providence College. 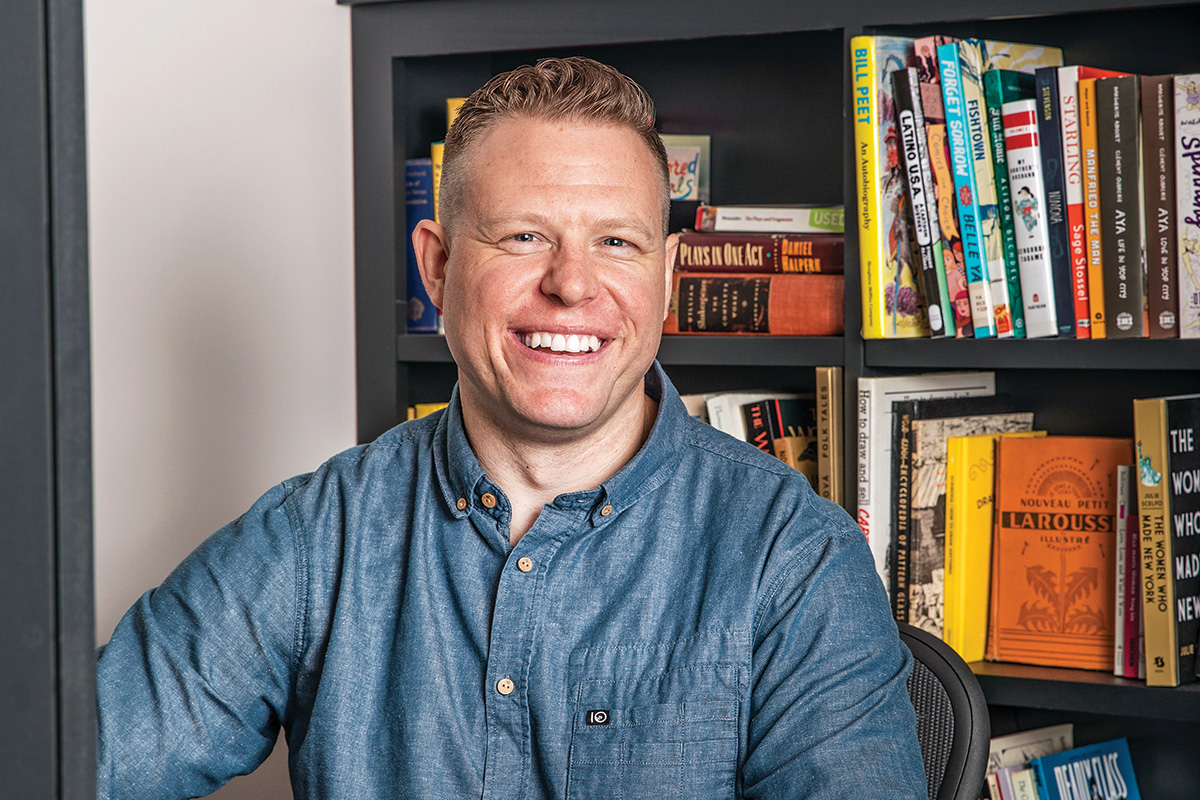 Veteran and student Lucas Pralle at the
What Cheer Writers Club in Providence. Photography by Alex Gagne.

He separated from the army and landed several jobs including as a restaurant manager for California Pizza Kitchen at Foxwoods Resort Casino. He had what he calls “an eye-opening moment” when he got into a car accident on his way home to Cranston from work. He had a one-year-old daughter at the time. “I realized I couldn’t raise a family, commute to Foxwoods and work a sixty-to seventy-hour job every week and be happy,” he says.

Now he’s pursuing a degree in speech-language pathology, planning to specialize in veterans who have experienced traumatic brain injuries. “It’s my first year, starting at the beginning,” he says. “My degree in music education doesn’t really translate over very well.”

The Student Veterans Organization was formed about 2012, but had fallen semi-dormant since then. Now Chang and several other student veterans are working to revive the SVO and make it a center for information, networking and guidance for all student veterans at URI. The SVO also tries to look out for veteran issues on campus. When URI considered holding classes on Veterans Day, starting in 2020, they successfully lobbied the university’s Faculty Senate to maintain the holiday.

Chang says he enjoys the camaraderie with his fellow vets, whether it’s in Johnson’s classroom or the SVO. “There are certain things only vets will get,” he says. “A very dark humor that comes out of our shared experiences . . .there’s a military thought process you can turn on and off.”

When it’s Russell Sherwood’s turn for his class presentation, he gives a real estate mini-seminar complete with charts, interest rates and prices on buying a house. He includes detailed information on different kinds of loans, including federal programs available to veterans. He shows pictures of the four houses he considered buying, explaining the pros and cons of each.

For Sherwood’s presentation, the veterans are meeting on URI’s Kingston campus, in a classroom on the second floor of Swan Hall. Unlike the conference room in downtown Providence, Swan 201 is a conventional classroom, with rows of desks facing front. The class far prefers the set-up in Providence, where everyone sits as equals around the big table, according to Johnson.

When Lucas Pralle begins his project, he sets up a portable speaker system, and passes out drawing materials. Then he plays an apparently random series of sounds, and asks his fellow students to sketch whatever comes to mind. The sounds are never identified — maybe someone working with tools, then perhaps running water, then the sounds of nature that may have been recorded in a forest or swamp.

After ten or fifteen minutes, class members turn in their drawings. One draws the view from his parents’ back porch in Kansas, with little yellow dots representing fireflies. Another presents a drawing of his grandfather’s place near Gaspee Point, while still another draws dolphins, as seen from the deck of a U.S. Navy ship while on a deployment.

The recordings are part of a project Pralle has created in collaboration with his girlfriend, Carolyn Decker, called Endless Beautiful. Over the past three years, Pralle and Decker have recorded random sounds around the region and use them to inspire writing or art.

They’ve created a website, endlessbeautiful.com, produced podcasts and have held workshops at AS220 and Frequency Writers in Providence. Pralle, who is working on his master’s degree in adult education at URI, sees Endless Beautiful as a way to combine technology and teaching.

Pralle took a roundabout route to URI that ran through Wisconsin, Iraq, China, Seattle and California. Born in Wisconsin, he was a U.S. Marine from 2005 to 2009, serving two tours in Iraq with the Ist Light Armored Reconnaissance Battalion. “That was a very high level of intensity. I trained like a pro athlete every day,” he says.

But at thirty-six, he doesn’t dwell on his military service. (His bio on the Endless Beautiful website doesn’t mention it, although his LinkedIn page does.) “I appreciated the camaraderie. But I’m not one of those guys who is rah rah all the time. I don’t like categorization: ‘Oh, there’s a guy who was an infantryman in Iraq who’s all messed up and all he can do is break things,’ ” he says. “That’s not who I am.”

Right after the Marines, Pralle tried opening a hair salon in California. His girlfriend at the time was a hair stylist. “It was a disaster. It was so bad. . . I had no idea how to run a business.” But the story has a happy ending: his mother bought the equipment, and now runs a successful salon in their Wisconsin hometown.

He returned to Wisconsin from California and got a bachelor’s degree in English from Edgewood College in Madison. In his junior year, he traveled to China on a cultural
exploration trip. After graduating, he earned a certification to teach English as a foreign language from the University of Washington in Seattle, and then returned to China to teach English for a year and a half.

Two crucial things happened to Pralle in China. He discovered a love of teaching. And he met Decker, who was visiting China as a Watson Fellow from Wheaton College. Decker, a wetlands biologist, is also pursuing an MA degree at URI, and persuaded Pralle to come to Rhode Island.

In Rhode Island, he began teaching English as a second language at Community Care Alliance in Woonsocket, and decided he wanted a career teaching adults. He enrolled in URI to get a graduate degree in adult education, and Johnson invited him to join EDC 278. For Pralle, it was a chance to re-connect with veterans.

“I was surrounded by more veterans my age than I had seen since I left the Marine Corps. This was a community I wanted to be a part of,” he says. “We all had a common thread — we all volunteered to join the military. We all went to boot camp. Many went around the world. We all dealt with the military experience…. I had stood off from these things after I got out of the Marines. I didn’t want to sit around and reminisce about the Marine Corps.”

As a companion to the student presentations, Johnson often brings outside speakers to his class, such as Tony Michaud, an account manager for APC by Schneider Electric, just down the road from URI’s campus in West Kingston. Michaud, a member of the National Guard in Massachusetts since 2014, says Schneider is a military-friendly company that values vets for their leadership skills. In class, he ticks off a list of career opportunities at Schneider Electric, including engineering and finance.

“I’m definitely interested,” says Michael Limoges, a student from Exeter who is still on active duty inspecting helicopters at the Rhode Island Army Aviation Support Facility at Quonset. “But I don’t know where an E7 with seventeen years of experience inspecting helicopters would fit in… if you’re sitting in front of a civilian hiring manager, they don’t
always realize what you can do. They don’t grasp the amount of training we get, what we are capable of. Do you think they get it?” 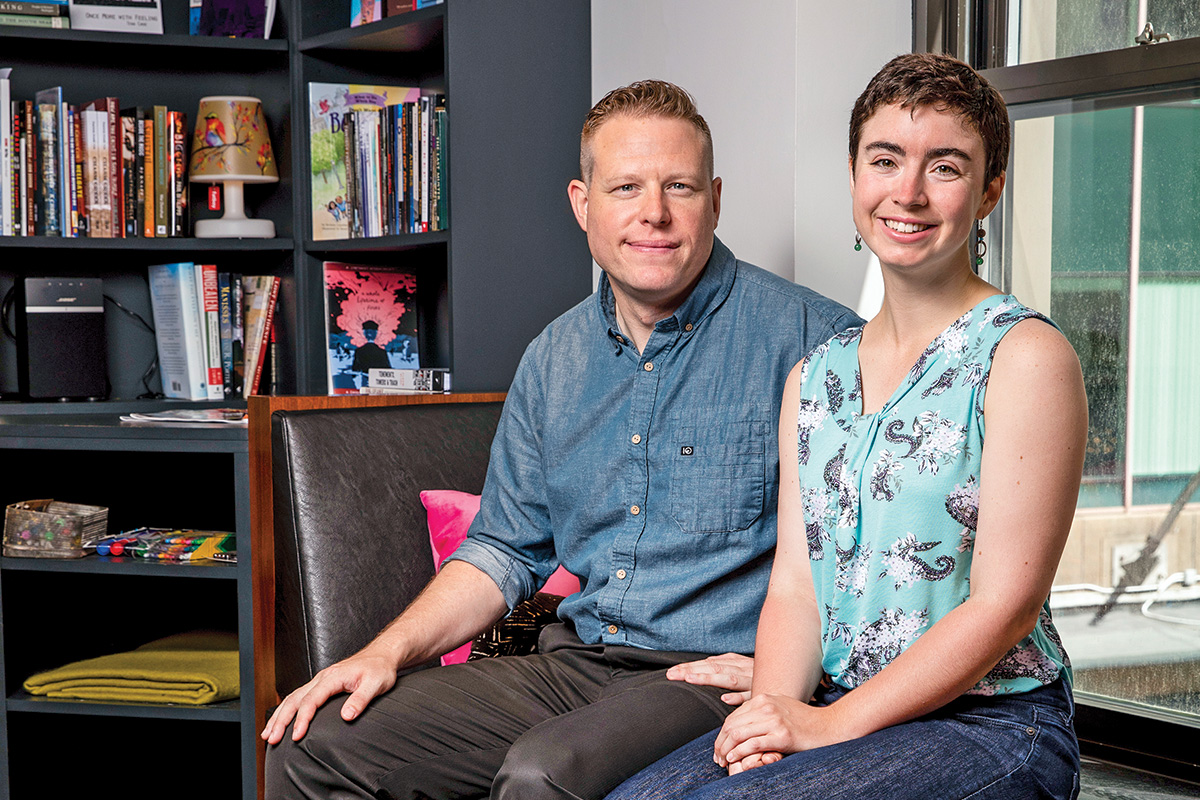 Lucas Pralle, and his girlfriend, Carolyn Decker, work together on projects at the What Cheer Writers Club. Pralle and Decker have a website, Endless Beautiful, that combines technology and teaching. Photography by Alex Gagne.

No, Johnson interjects from the front of the classroom. They probably don’t. And it’s hard to put it across on a resume. It’s difficult to communicate military skills and values — the training, the responsibility, the discipline — to someone who hasn’t been there. “That’s issue number one — how do you communicate your military skills to civilians,” Michaud says. “The leadership, the responsibility you have learned… no one else has that leadership experience. Companies are looking for it. They realize that what you have matters.”

Michaud’s company has a veterans’ hiring initiative, which interested him thanks to his own military experience. He thought URI would be a good place to connect with veterans but he had no idea there was a class for them until he found Johnson on the school’s website and emailed him. “I thought it was awesome,” he says. “Why doesn’t every college campus have something like this?”

Limoges, thirty-six, is a Warwick native who enlisted right after graduation from high school. He’s been in the Guard for seventeen years, with three overseas deployments to the Middle East. Now he says he’s ready to transition to civilian life, and is pursuing a degree in aquaculture and fisheries at URI.

Unlike some of his classmates, Limoges’s class project speaks directly to his military background; the Combat Veterans Motorcycle Association. It’s a nationwide support group whose members of the military have seen combat. Limoges owns a 2017 Harley-Davidson and rides with one of Rhode Island’s two CVMA chapters. Membership, he says, is simple. Be a combat veteran and have a motorcycle with an engine larger than 500ccs. (No scooters here.)

“There are so many who came before us who need help,” he says. The Vietnam War veteran whose only means of transportation, a truck, needed a new radiator, for example. Or the eighty-four-year-old Korean War veteran whose house was a wreck — the bathroom actually fell through the floor. Many years after joining the military, Limoges’s skills and experience are lighting the way to his new civilian life.

“We ride motorcycles and we raise money for those in need,” he says.

“We’re part of a revolving door of veterans helping other veterans, which is why I love this class so much.”