URI Caters to Military Vets with This Special Program

Military veterans can acquire the tools for making it in the civilian world.

Friday afternoon at 4 p.m. is usually not the best time to hold a college class. Party time is about to start. But there is one course at the University of Rhode Island that gathers a faithful following at 4 p.m. on Fridays. Technically it’s EDC 278, an independent study course in the Alan Shawn Feinstein College of Education and Professional Studies. But you might think of it as Vets 101, a class for military veterans, designed to help them navigate the tricky waters of college life.

So on a chilly Friday afternoon in March, Lucas Pralle, a former U.S. Marine who served in Iraq, sits at a long conference table in a meeting room on the second floor of the old Shepard Building in downtown Providence. It’s now URI’s urban campus. Heather DeFreitas, once a flight operations specialist with the Rhode Island National Guard, is also there. And Marland Chang, president of the Students Veterans Organization (SVO) at URI. 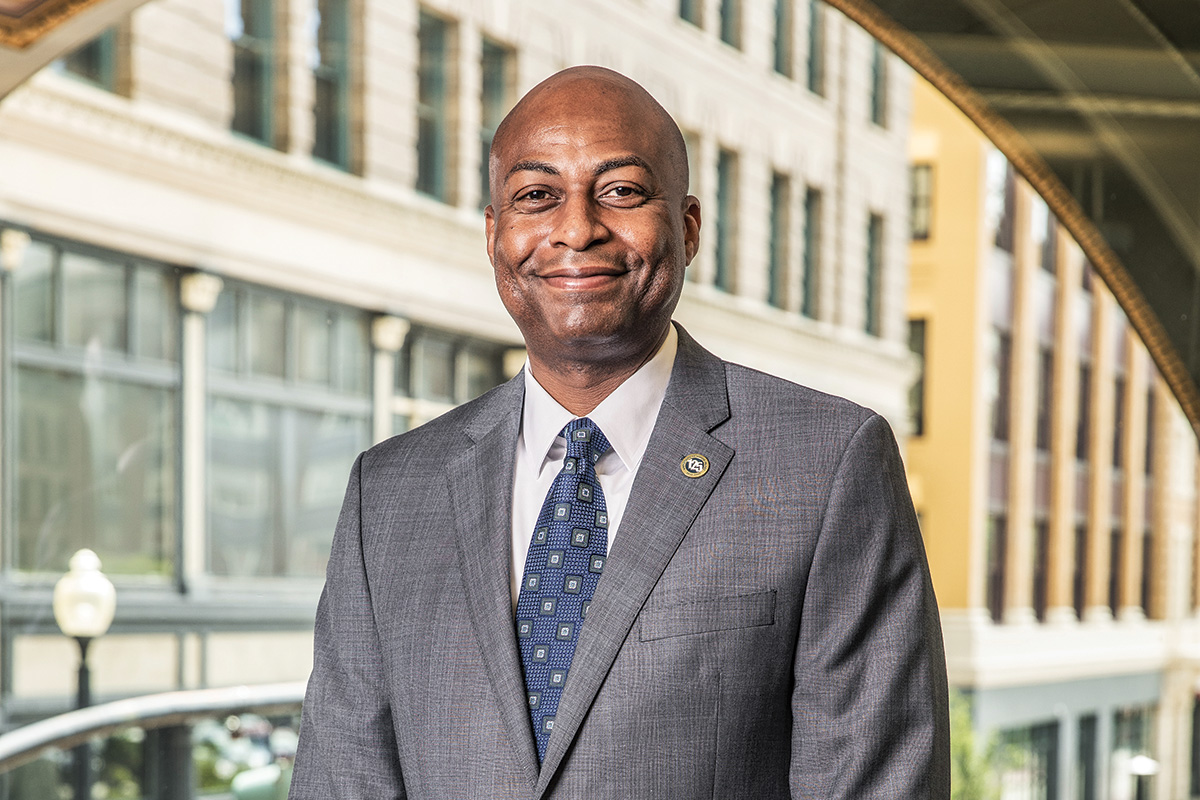 They are among the twenty some military veterans listening as Jeff Johnson, veteran affairs adviser for the College of Education and Professional Studies, guides them through registering for courses, meeting with professors, time management, writing papers, study habits, exams, fulfilling degree requirements and more.

But Johnson doesn’t start his class with any of that. He begins with a trivia test that includes questions on Harry Potter, Chinese dynasties, kings of England and Keanu Reeves movies. “So why did I waste eight to ten minutes of your time with this quiz?” he asks when the test was over.

Partly, he says, it’s just to get everyone’s brain in gear. But he’s also trying to make a point about knowledge. There’s a lot to learn in college. You can’t know everything. Occasionally, you might even have to make a guess. “But it’s not a wild guess. It’s an educated guess,” Johnson says.

Johnson’s course is a haven within the sprawling URI community where veterans can form a unique bond with one another. “I just feel a peace of mind in the class,” says Kiel Quinn, an eight-year army veteran who served three tours in Afghanistan. “I know if I need support, it’s going to be there.”

In this class, you can talk about being an E7 (that’s a pay grade for enlistees) or getting a copy of your DD214 (a document you receive when you leave the military) without having to explain what you are talking about. Johnson brings the charisma and confidence of the athlete he used to be in college. He’s 6 foot 2 inches, dapper in a suit and tie, with a shaved head. “I wanted to look like Michael Jordan,” he says. He wears suits to class for a reason. One is to represent the university in a professional manner; the other is to show veterans what they might be wearing in their careers. (During a previous semester, Johnson had a representative from a clothing company talk to the class about dressing for, say, a job interview.)

There are about 300 veterans among URI’s 18,000 students at any given time. The vets in this class range in age from mid-twenties to late-forties. Most have jobs, many have families and they are using the educational benefits they earned in the military to go to URI. University officials sometimes describe them as non-traditional students. In the final class of the spring semester in April, when all the students receive certificates of appreciation from Governor Gina Raimondo, Rhode Island Director of Veterans Affairs Kasim Yarn hails them as “Yesterday’s warriors, today’s scholars, tomorrow’s leaders.”

Nicely said. But many in the class feel alienated from what they consider “typical” URI students, the eighteen- or nineteen-year-olds living on campus, away from home for the first time.

“It’s hard for me to connect with the younger students here,” says DeFreitas, who is twenty-nine. “They’re just at a completely different stage of their lives. I feel a closer rapport with the people in Johnson’s class. People there come from so many different backgrounds, and so many different experiences. You can go to that class and be almost certain that someone will have been through the same thing as you.”

Veteran students tend to be more serious, and more focused on job opportunities than many URI students. “They want real-world experiences and conversations,” Johnson says. “Internships, job training, job fairs are very important to them.”

The class, which is not a requirement, is now in its third year. It’s an outgrowth of “URI 101: Planning for Academic Success,” an introduction to university life that’s required of all incoming students. But some of the class material, such as dorm rules and URI’s alcohol policies, is mostly irrelevant to student veterans who live off campus. Vets have different needs.

At forty-eight, Ken Steiger is a self-described army brat and avid striper fisherman who lives in Charlestown. He spent a total of twenty-seven years in the military, much of it as a flight engineer. He remembers seeing people shooting at his plane while flying in and out of Iraq and Afghanistan. This is his first semester in college. “I graduated high school in 1990. I didn’t know enough about going back to school. I thought you just showed up,” he says. “So many things have changed. For one thing, everything’s on the computer now. Registration, homework, reading, it’s all on the computer.”

Johnson thinks of his course as a barometer, seeing how student veterans will fare at the rest of the university. If a student communicates well, completes assignments on time, participates in class, those are all good signs. He emphasizes the importance of veterans helping other veterans by sharing information or simply making sure everyone is okay. “Be sure to take the time for a two-minute mental health check with each other,” he tells his students. “Continue to check in with your classmates. You are a special group, a unique group on this campus.”

Johnson has worked at URI for ten years, and before that at UMass Dartmouth and Dean College. In the decade he’s been at URI, he’s seen changes in the student veteran population. It has grown younger, more diverse, with a wider range of ambitions. While in the past many veterans were aiming for government or law enforcement jobs, now they are looking at cyber-security, biotech, teaching, environmental science and more.

Johnson was born in Kansas City and attended Northwest Missouri State University, where he was a basketball player and later a coach. He would go on to coach basketball at small schools in Tennessee, Texas, Missouri, Iowa and Massachusetts. (His wife, Margot Royer-Johnson, is head volleyball coach at Providence College.) But although he is one of the go-to people for veterans at URI, Johnson never served in the military.

“Just because you haven’t walked their walk doesn’t mean you can’t help them. When I was a student athlete, a lot of people who weren’t athletes helped me,” he says.

Johnson’s years as a coach have helped him work with vets. (So does having a father-in-law who was a Vietnam veteran.) As a coach, he learned a lot about teamwork. He helped athletes with their academics and degree requirements, so they could stay in school. He learned about financial aid. All these things come in handy when dealing with veterans as well as athletes. 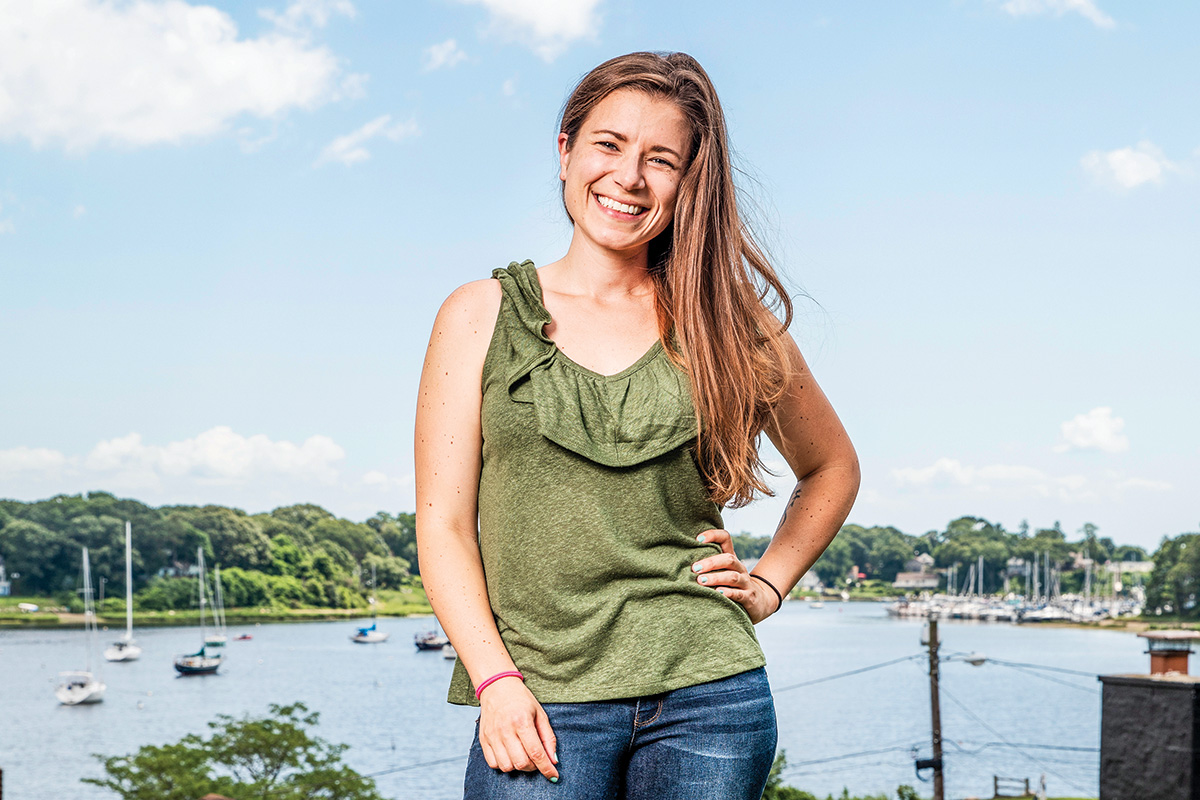 Veteran and student Heather DeFreitas resides in Warwick with her four-year-old daughter. Photography by Alex Gagne.

“I was surprised Jeff is not a vet,” says DeFreitas. “He has a very military-like attitude and bearing. I find him very easy to get along with.”

DeFreitas is originally from Vermont, where she finished high school, then moved to Rhode Island with her family. She now lives in Warwick with her four-year-old daughter and a big floppy dog. She was in the Rhode Island National Guard full time from 2010 to 2016, and in the inactive reserve from 2016 to 2018. She deployed to Kuwait with her Guard unit in 2011-2012. As a flight operations specialist, she tracked and coordinated flights, kept records, made sure the maintenance was performed on the equipment.

“I don’t tend to tell people I’m a veteran,” she says. “I just don’t bring it up unless there’s a particular reason. I’m proud of the time I served, and I’m happy I did it. But it was always meant to be a stepping stone for me. . . I didn’t leave the military exactly knowing all my options for education. It kind of got lost in the shuffle of briefings when you leave the service. When I found out all my benefits, I was blown away.”

She took courses at CCRI on and off from 2013 to 2018, while juggling family responsibilities at the same time. She also worked at CCRI’s Veteran Services Office, helping other vets. In 2018, she transferred to URI, and will be entering her senior year this fall. When she graduates, she hopes to work helping children with special needs.

In the meantime, DeFreitas is working two part-time jobs besides being a student, at the Child Development Center and the Veteran Affairs Office, both at URI.

How does she deal with two jobs, her studies and motherhood? “I drink a lot of coffee and take everything one day at a time.”

Each semester, Johnson has every student in his class deliver a presentation on a topic of special interest to veterans —although he keeps the definition loose. The presentations increase awareness — and perhaps participation — in veteran resources, organizations and events. At the same time, it gives class members experience in speaking before a group.