Turning the Tide for Women’s Health Care in Rhode Island

Women have historically faced discrimination in access to health care, but a group of local female lawmakers and advocates is pushing back. 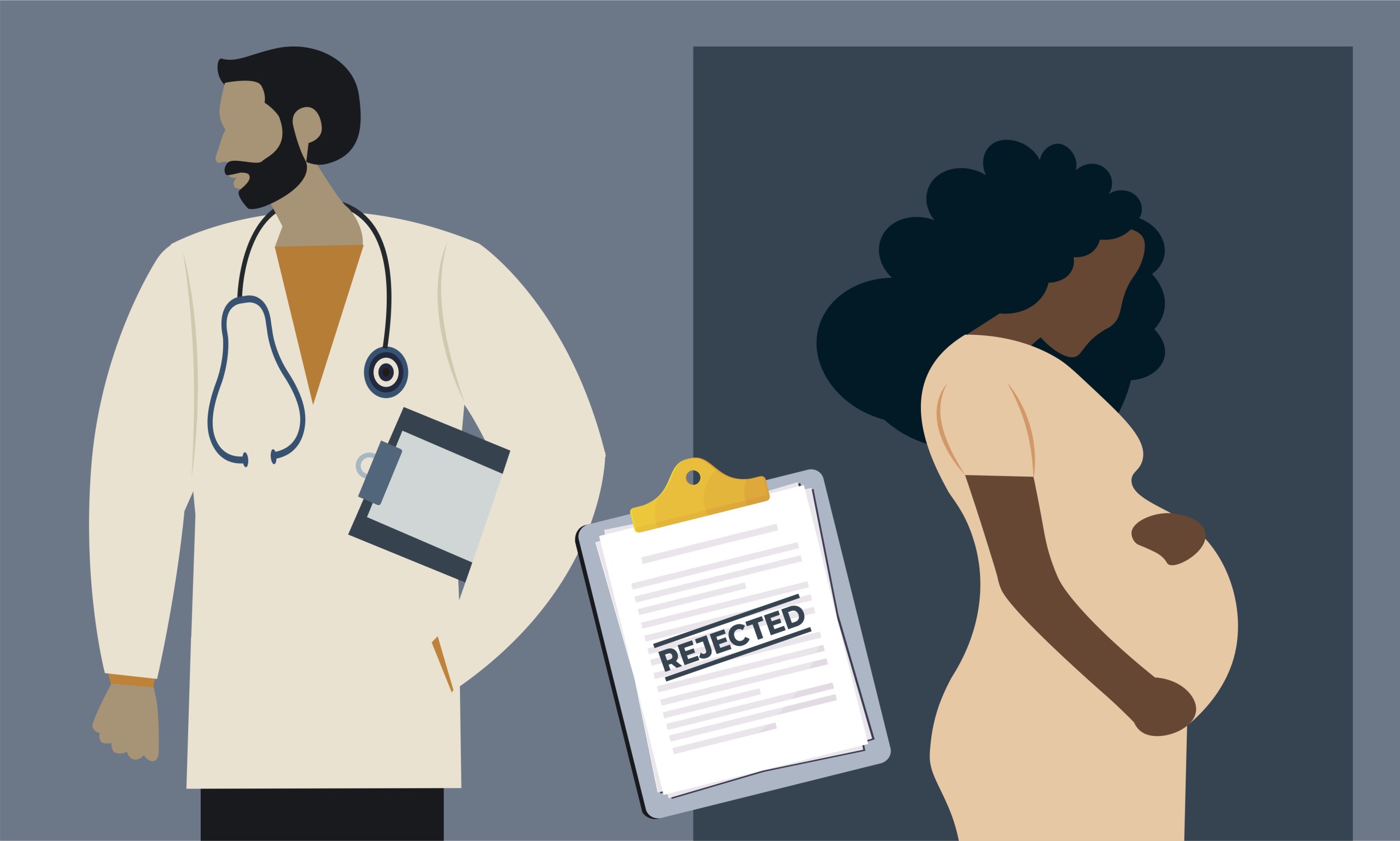 Twenty-six years ago in February, Marcia Ranglin-Vassell left Women and Infants Hospital with twin baby boys and an IV needle still stuck in her arm. She was thirty-six, perfectly healthy, working at the hospital’s mobile clinic as she earned a bachelor’s degree in community health. She is also Black and a Jamaican immigrant. She returned to the hospital to have the needle extracted, and about a week later, she was back again with the worst headache she had ever felt in her life. Ranglin-Vassell was admitted and diagnosed with postpartum preeclampsia — dangerously high blood pressure — and a brain aneurysm.

Americans like to believe that they have the greatest health care system in the world, but you couldn’t prove it by the health outcomes data. Depending on what factors are considered, the United States ranks far below other industrialized nations: thirty-fifth on the 2021 Bloomberg Global Health Index, and dead last on another 2021 list of wealthy countries compiled by the Commonwealth Fund, a health care policy think tank. Black maternal health is one of the weakest spots in our system. According to the Centers for Disease Control and Prevention, about 700 women die each year during pregnancy or within a year of giving birth. Black women are three to four times as likely to die from a pregnancy-related cause than white women.

For another week, the doctors monitored Ranglin-Vassell’s condition, while she bargained with God. “I am not ready to die,” she prayed. “I’ve got things to do and boys to raise.”

She recovered, and among the things she went on to do was to beat House Majority Leader John DeSimone in the 2016 primary for House District 5 in Providence. In the years following her harrowing experience, Ranglin-Vassell continued to study how racism infected the health care system — particularly for Black women. And in 2019, as a representative of the House, she filed a bill to give expectant mothers better access to birth doulas. A doula is a complement to a woman’s medical care, acting as an advocate during and after pregnancy. For three years, Representative Ranglin-Vassell lobbied for legislation to require private insurers to cover doula services. In 2021, the bill passed.

“Doulas provide physical and emotional support,” she says. “And maybe if I had had one, she would have told me to go right back to the hospital instead of sticking my head in the freezer to make the pain go away.”

The doula bill was only one of six related to women’s health and equity that Governor Dan McKee signed into law in August. Among the latter are bills banning health insurers from charging women and men different premiums for individual insurance, requiring public schools to offer students feminine hygiene products at no cost and allowing people to request that their insurers send health communications directly to them instead of a parent or spouse to protect the medical privacy of women facing domestic abuse and sexual violence.

“Women do so much — they have the child care, they are breadwinners, they are leaders, they are caretakers. Anything we can do to make health care affordable and accessible for all women is so important,” says Senator V. Susan Sosnowski (D-District 37, South Kingstown, New Shoreham), who co-sponsored the insurance rates legislation. “Twenty-five years ago, in 1997 when I first started, it was a real battle. And it took a lot of courage to stand on the floor and support pro-choice legislation.”

Some of these measures codify existing federal law. For example, in 2019, the General Assembly passed the Reproductive Health Care Act, which established in state law a woman’s right to an abortion granted under the Supreme Court decision, Roe v. Wade. Similarly, the new law prohibiting gender discrimination in insurance rates mirrors a provision in the Affordable Care Act that eliminates gender ratings in the individual market and bans discrimination in health coverage from insurance providers receiving federal funds.

These bills got pushback from opponents who argued that they weren’t necessary, but legislators, such as House Majority Whip Katherine Kazarian (D-District 63, East Providence), who co-sponsored the insurance rates and health communications bills, persisted.

“I think it’s hard to see what’s happening in Washington. My role as a legislator is to protect and help all Rhode Islanders and do my best to ensure they have those rights, regardless of what happens at the federal level,” she says.

Having insurance is the first — but by no means the only — barrier for women accessing health services in the United States. Prior to the passage of the ACA, pregnancy itself was considered a preexisting condition, and 90 percent of individual health plans did not provide routine maternity benefits. Coverage for reproductive health, including contraception, remains controversial. Still, Rhode Island women are better off than their counterparts elsewhere. According to figures assembled by the National Women’s Law Center, in 2019, 11.4 percent of adult women ages nineteen to sixty–four nationwide did not have health insurance compared to 5.3 percent of Rhode Island women.

But every day, Planned Parenthood of Southern New England’s Providence clinic treats marginalized groups, such as women of color, low-income individuals, immigrants and members of the transgender community.

“Women tend to pass legislation that’s good for families and what’s good for families is good for all Rhode Islanders. We know what our priorities are, and we really push them. Now we are getting a lot of work done that we couldn’t under the patriarchal, authoritarian leadership we were living under for decades.” — Representative Susan Donovan

“Certain folks have particular challenges accessing health care. We view our patients under the lens of intersectionality. The system leaves a lot of these people behind because of these identity factors,” says Zari Watkins, chief operating officer. “We try to close that gap — to capture folks who would otherwise have trouble accessing high-quality care.”

Sexism in health care has a long history. It is rooted in ancient myths about the mysteries of the female body and its innate inferiority to the male counterpart. Historically, women were excluded from medical practice and research, and from clinical trials, on the belief that female hormones introduced too many variables — they simply could not be studied. This bias showed up in myriad other ways, from early male anatomy artists who drew women’s craniums smaller and their hip bones wider, to the attribution of women’s physical disease to psychological causes. Hysteria was once a medical term coined from the Greek word for “womb” to describe a female nervous condition.

And it continues to this day. A 2019 survey in USA Today about gender discrimination in health care found that more than half the women respondents felt it was a serious problem and about 20 percent reported that a provider
ignored or dismissed their symptoms. These observations have been borne out in studies showing that women are more frequently misdiagnosed, experience delays in diagnosis, are given less pain medication and less effective pain medication, and in general, receive less evidence-based care than men with the same symptoms, in a wide range of diseases.

If individual attitudes are slow to extinguish, policy changes can provide a push. Women doctors, researchers and lawmakers, working in concert, are wringing gender discrimination out of the health care system one insurance denial at a time. In Rhode Island, what looked in August like significant progress with a ceremonial flourish represents the confluence of those forces.

According to numbers compiled by the Center for American Women and Politics, in the last two decades, the percentage of women in the Rhode Island House and Senate fluctuated somewhere around 25 percent. The 2016 election of President Donald Trump galvanized Democratic women nationwide to run for office, and that percentage started to climb. Women now occupy 44 percent of the legislative seats on Smith Hill — an all-time high.

House Speaker K. Joseph Shekarchi has been a key ally, women legislators say, and a welcome change from the management style of his predecessor, Nicholas Mattiello, whose tenure from 2014 to 2020 was marred by controversies and accusations of retaliation against Democratic dissidents — especially women.

These efforts also have been buoyed by outside organizations, such as the Rhode Island Coalition for Reproductive Freedom, a group of twenty-one organizations supporting lawmakers by lobbying for their passage and marshalling grassroots support, says coalition Chair Nicole Jellinek.

The coalition is working on a number of new initiatives: a bill to release from liability entities that want to donate feminine hygiene products to nonprofits, shelters — any group willing to supply them — and another to allow trained pharmacists to dispense all FDA-approved hormonal contraceptives. The more immediate battles are passage of the Equality in Abortion Coverage Act, which would end longstanding prohibitions on insurance reimbursements for abortion services for state employees and recipients of state Medicaid, and another to extend Medicaid coverage for pregnant women to a year post-birth.

Dr. Beth Cronin, an OB-GYN physician and head of the American College of Obstetricians and Gynecologists’ state chapter, says the current rules cut some low-income pregnant women off from insurance six weeks after birth — a vulnerable period.

“Six weeks postpartum is really fast when managing depression or high blood pressure or if someone wants sterilization,” she says. “These are equity issues and [extending insurance coverage] helps women take better care of their kids.”

Introduced in 2020, the Equality in Abortion Coverage Act is expected to again face determined opposition. But, unlike in Sosnowski’s early years in the General Assembly, forty-seven legislators are co-sponsoring the bill to end a restriction affecting one-third of Rhode Island residents.

“We know that reproductive freedom is social and economic justice. We want people to have bodily autonomy, have children when they want to have children and parent in sustainable communities. Just because you have a right, doesn’t mean you can access a medical procedure,” says Jellinek. “I’m delighted with all we accomplished last year. There is new energy at the State House that led to the passage of some important bills. But I don’t think it’s enough.”