We ordered in from Jeff's, Bettola and Pasquale's and discovered slices of heaven in each box. 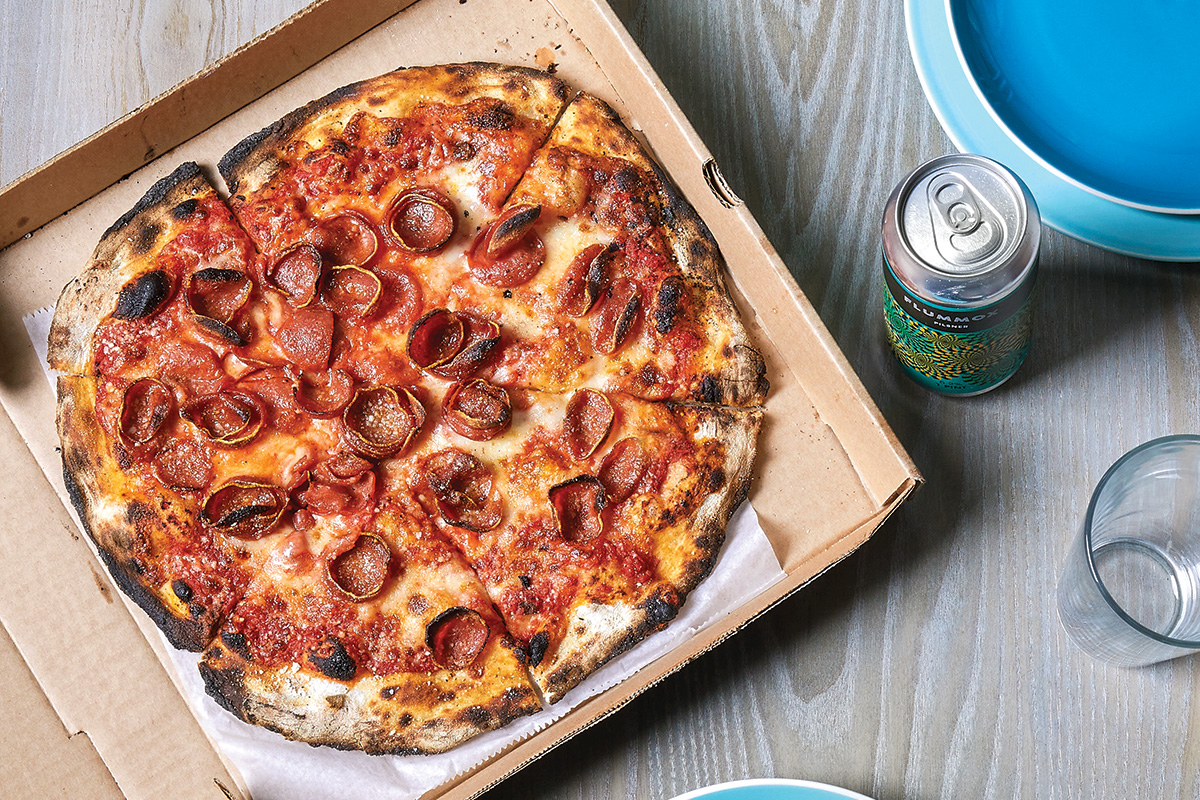 In uncertain times, there is still pizza. Perhaps the world’s most reliable food, it follows the old adage that, even at its worst, pizza is still pretty damn good. That’s not to say it’s remained stagnant over the past seventy years or so: The evolution of pizza in this country is a study in dough, from thin to thick to blistered. But, as far off as Naples is, the native Rhody spirit is readily infused into what has become an American staple.

Born out of a wood-burning food truck, Jeff Stafford and his wife, Alexis, recently opened up a storefront in East Providence which — like every other venue in the state — turned to takeout in its very first months. But not much is lost in translation; the twelve-inch pies travel with charm. Stafford uses a sourdough starter in his dough and its influence is significant. Individual pizzas are tinged with wood soot but because the dough is bubbled and chewy, the contrast is marked and welcome. The beauty of a wood-burning baked pizza is that, in ninety seconds flat, it creates history for those of us eating. We know where that dough came from as it tells the story of its origin in every bite — and Stafford is intent on telling tales in the constructed pie as well.

In the thick of social distancing and the subsequent outpouring of support, Stafford expressed his pride at being a townie and his local conviction permeates the menu. Barbecue pork comes from Pawtucket’s Smoke and Squeal, mozzarella hails from Narragansett Creamery and meatballs are made in-house. Throw in accessories like candied jalapenos, organic micro basil and a piquant balsamic buffalo sauce, and you’ll start to see just how far-reaching the impact of Stafford’s alma mater, JWU, is. Even Proclamation Ale has a foot in the game with its “Proc Loves Jeff IPA,” a brew that matches not only the charred crust with an appropriately bitter note but the previous noteworthy can designs as well. This may be the very best-looking logo on the market.

There are sides worth getting with your stellar pizza: a mean hot honey chicken sandwich, truffle fries and house salads. But Jeff’s radiates local love in its pies and, if you can only get one thing, order a pepperoni pizza loaded with meaty cups that curl upward like Shrinky Dinks. Only a place like this could make you think of Campania in the first bite and finish the last bite proud to be a Rhode Islander.

127 Waterman Ave., East Providence, 537-7500, jeffswoodfired.com.
Must get: Pepperoni with a can of Proc Loves Jeff IPA. 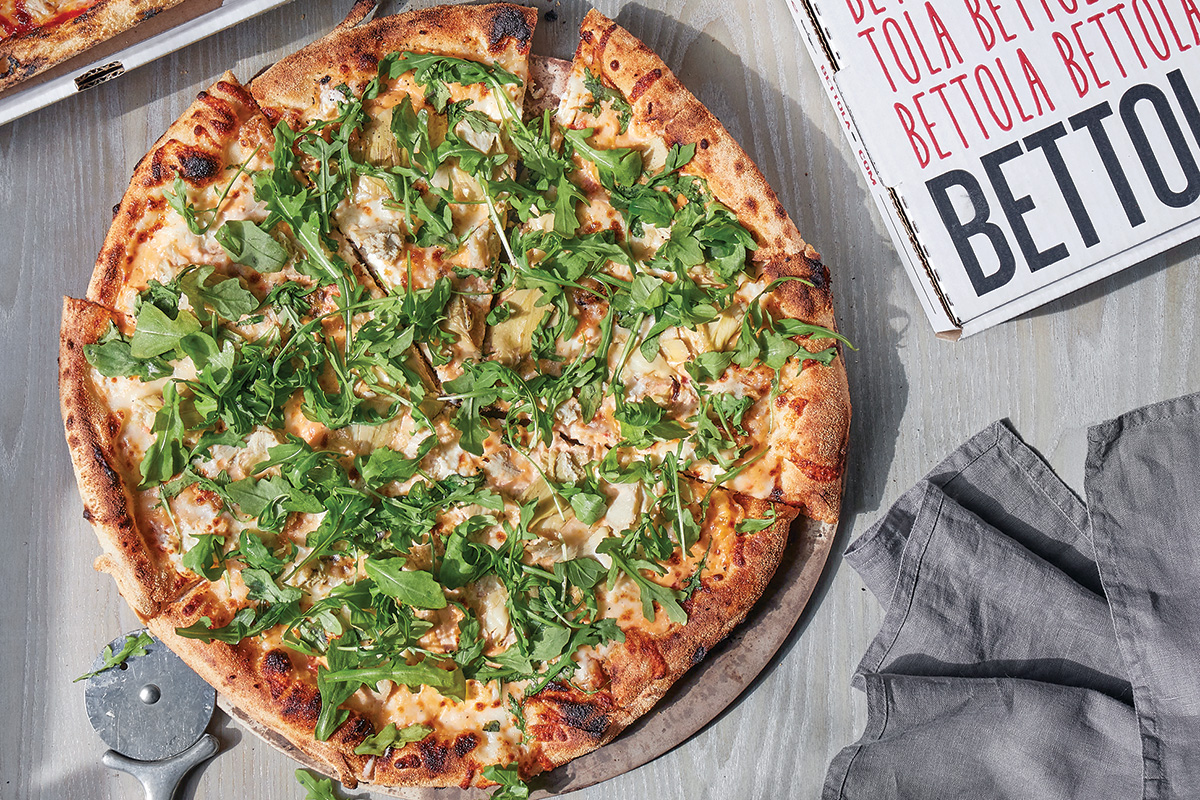 Bettola is a pizza joint disguising itself — successfully — as a bar with a retro, urbane appeal. Its broad brass pendant lights and olive leather banquettes suggest that it’s almost too stylish to be considered for local takeout but style lies far beyond interior aesthetics. Bettola is the little sister to Cranston’s Basta and it carries that same juxtaposition of modernity and tradition. Even appetizers go old-school, from the pasta fagiole and arugula salad to the eggplant rollatini and fried discs of mozzarella served with bright basil pesto.

The pizza is a cross between Neapolitan and New York-style: It comes out charred on the edges but it’s firm enough to eat by the slice and, if you’re from Queens, you’ll even be able to fold it in half while swallowing the slice in three swift bites. The menu speaks with an Italian sense of humor: Luca Brasi, Eddie Mush-room and Dr. Vinnie Boombatz are all an array of updated classics, featuring bianco sauce, braised beef, a red sofrito base and a shower of prosciutto. But given that Bettola has put so much care into its pizza accessories (toppings, sauces, drizzles and crusts), this is the place to build your own.

There are easy ways to sprinkle a bit of sparkle-dust on your pie including splashes of truffle buffalo sauce, dollops of lemon aioli and white truffle oil. But if you’re a vegetable fanatic, this is your jam: Try a pink sauce pie piled with artichokes, caramelized onions and a drizzle of hot honey. In fact, whatever you order, get hot honey on top of it. One might hope Americans could add something to the evolution of pizza and, likely, this is it.

That’s not to say the menu is entirely focused on pizza. There’s a Sinatra-style vibe to the restaurant, one that permeates the menu with a sly confidence. If you’re spreading your wings, order up a short rib sandwich with provolone and pickled onions or a plate of the Impossi Bolognese, a vegetarian version of the Italian classic. It’s pretty easy to construct a multi-course meal at Bettola that also packs up cannolis, tiramisu and other local desserts of the day coated in chocolate. It may have the strongest visual appeal in the group but the restaurant is also the most comfortable understanding that parents can’t eat their slice in peace if the kids aren’t happy — and if anyone can entice the whole family, it’s Bettola.

44 Rolfe Sq., Cranston, 522-5222, bettola.com.
Must get: Any kind of pizza with pink vodka sauce and a drizzle of hot honey. Fried mozzarella with pesto is a kid-friendly bonus. 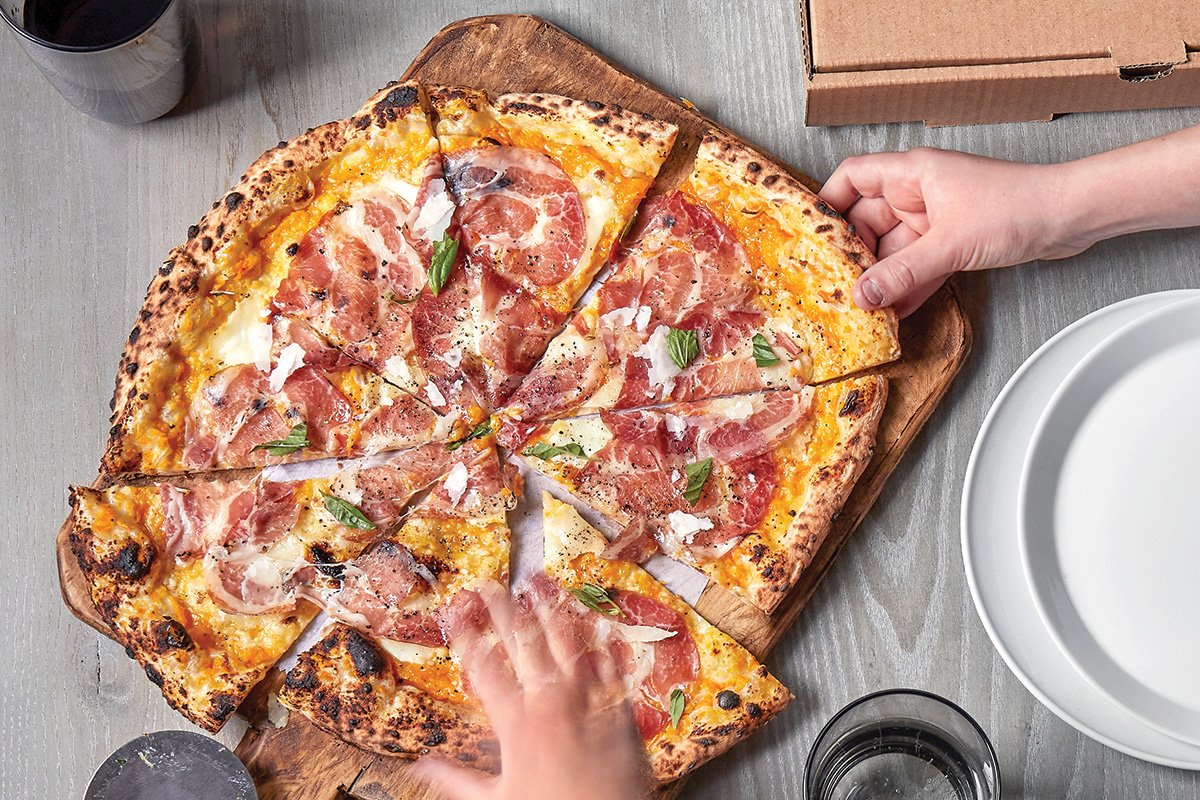 Pasquale’s is the OG of the pizza world — a fact that is based entirely on the experience of tasting it. Everything that comes out of its wood-burning ovens is a homage to the Italian countryside circa 1950, when people sat at a farm table in a fragrant field and let the sun warm their shoulders. Sophia Loren is at the table making eyes at everyone, the basil is growing underfoot and life plays out like a Luca Guadagnino movie. All of that — no joke — is packed into a Pasquale pie.

You can say, with some authority, that it’s the fermented dough or the fresh mozzarella or the San Marzano tomatoes. All of that would be enough to make a name for Pasquale Illiano in a continental pizza competition. But what makes him different is that, while he’s willing to indulge a buffalo chicken pie, he articulates himself most brilliantly through parmesan and prosciutto. There are three varieties of pizza in the ovens: New York-style, Grandma and Neapolitan. The first is the sauciest of the group with a substantive, chewy crust piled up with American-sized toppings, including thick slices of eggplant parmesan and hunks of Westerly soupy. Grandma-style pizza is larger and yet more restrained in its approach; it’s not what anyone would categorize as “thin” but it doesn’t play into excess. Pasquale’s serves versions with a melange of meats but this is the cheese pizza of dreams, made better by simplicity.

That leaves the Neapolitan. If there’s any bright side to mandatory takeout, it’s that Illiano finally opted to let his Neapolitan out the door after long insisting that it lost peak flavor over the threshold. This twelve-inch pizza is where the fireworks are, not just because the crust is Naples personified but because the options are so vast. Cacio e Pepe is a simple concoction of parmesan, romano and pepper; Carbonara combines egg and pancetta; Briganti is a medley of mushroom, sausage and pistachio. But the jewel is Pasquale’s Ninco Nanco, a Vesuvian yellow tomato sauce draped with translucent slices of capicola. Order two because the first should be eaten in the parking lot, immediately and with gusto.

60 South County Commons Way, South Kingstown, 783-2900, pasqualespizzeriari.com.
Must get: Ninco Nanco Neapolitan or, if you’re taking a break from pizza, the mortadella sandwich with mozzarella and pistachio pesto.