Watch the action unfold on the Audubon Society of Rhode Island’s live webcam. 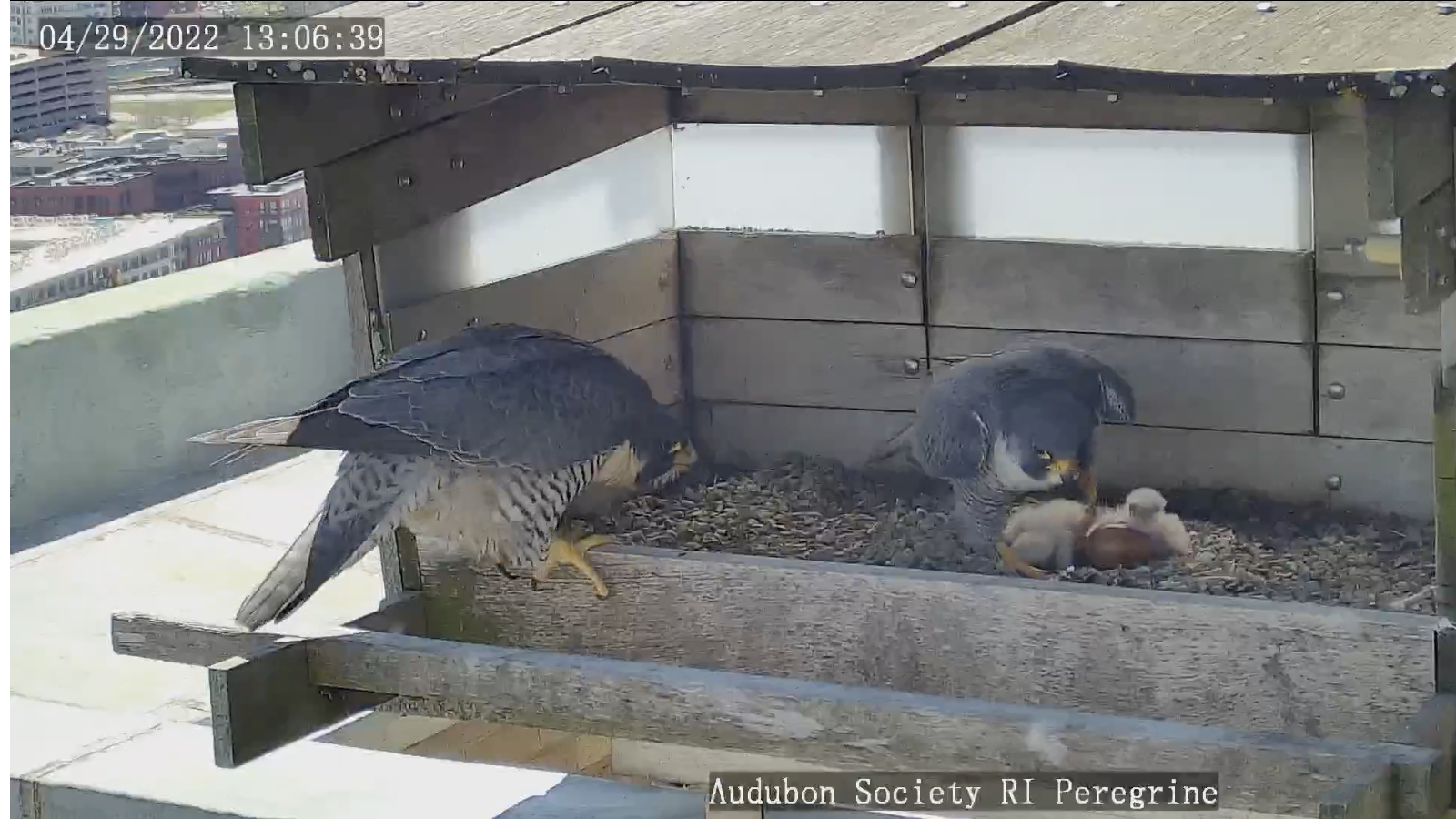 The adult peregrine falcons switch off parenting duties in a still image from the Audubon Society of Rhode Island webcam taken Friday afternoon.

Animal lovers, take note — the peregrine falcon eggs in the nest box on top of Providence’s Superman Building are beginning to hatch.

The Audubon Society of Rhode Island announced on Friday the first peregrine hatchling — known as an eyas — was seen in the nest box around 8:30 that morning. A sharp-eyed viewer spotted the new resident on the Providence Peregrine Livestream on the organization’s website.

By 12:35 p.m., two eggs had hatched, and the parents were already beginning to feed their babies. View a still image of the chicks being fed here.

The eggs can take a few days to finish hatching, so viewers can follow along on the peregrine page on the ASRI website. In addition to a livestream of the nest box, the page features updates on the falcons’ development. The camera typically stays on through the breeding and nesting season so viewers can watch the falcon babies grow up.

The best time to spot the hatchlings is during feeding, or when the parents switch off to take turns hunting for food. Viewers might also see the mother falcon eating the discarded eggshells. According to the Audubon Society, this is normal behavior to help replace the nutrients required to lay the eggs.

The Providence Peregrine Webcam has been on since 2010 to give viewers a glimpse into the breeding and nesting habits of these majestic predators. The adult peregrines typically begin their mating exchanges in March, when viewers can watch them interact from thirty floors above the streets of downtown Providence. The hatchlings will leave the nest in late spring or summer, though not before Audubon staff and volunteers band the birds to help keep track of where they end up as the cycle begins anew.

Though the Superman Building (i.e. the Industrial Trust Building) has been vacant for nine years, the Audubon Society continues to maintain its nest box and webcam atop the building through an arrangement with the owner. The webcam is supported by private donations and sponsors. Earlier this month, High Rock Development, the building’s owner, announced plans to redevelop the property into apartments and commercial space. The Audubon Society says they’ve been assured the camera and nest box will be allowed to remain through the project.

The current eggs in the nest box were laid in late March. Follow the livestream throughout the weekend to check in on the hatchlings and two remaining eggs (and check back later in the spring to watch the new falcons learn to spread their wings).

Prowling for Owls with the Audubon Society of Rhode Island

Get to Know the Adorable Oxen at Blackbird Farm

Someone is Finally Saving the Superman Building