The deli's Polish owners are sending supplies and donations to their home country to support refugees fleeing Ukraine. 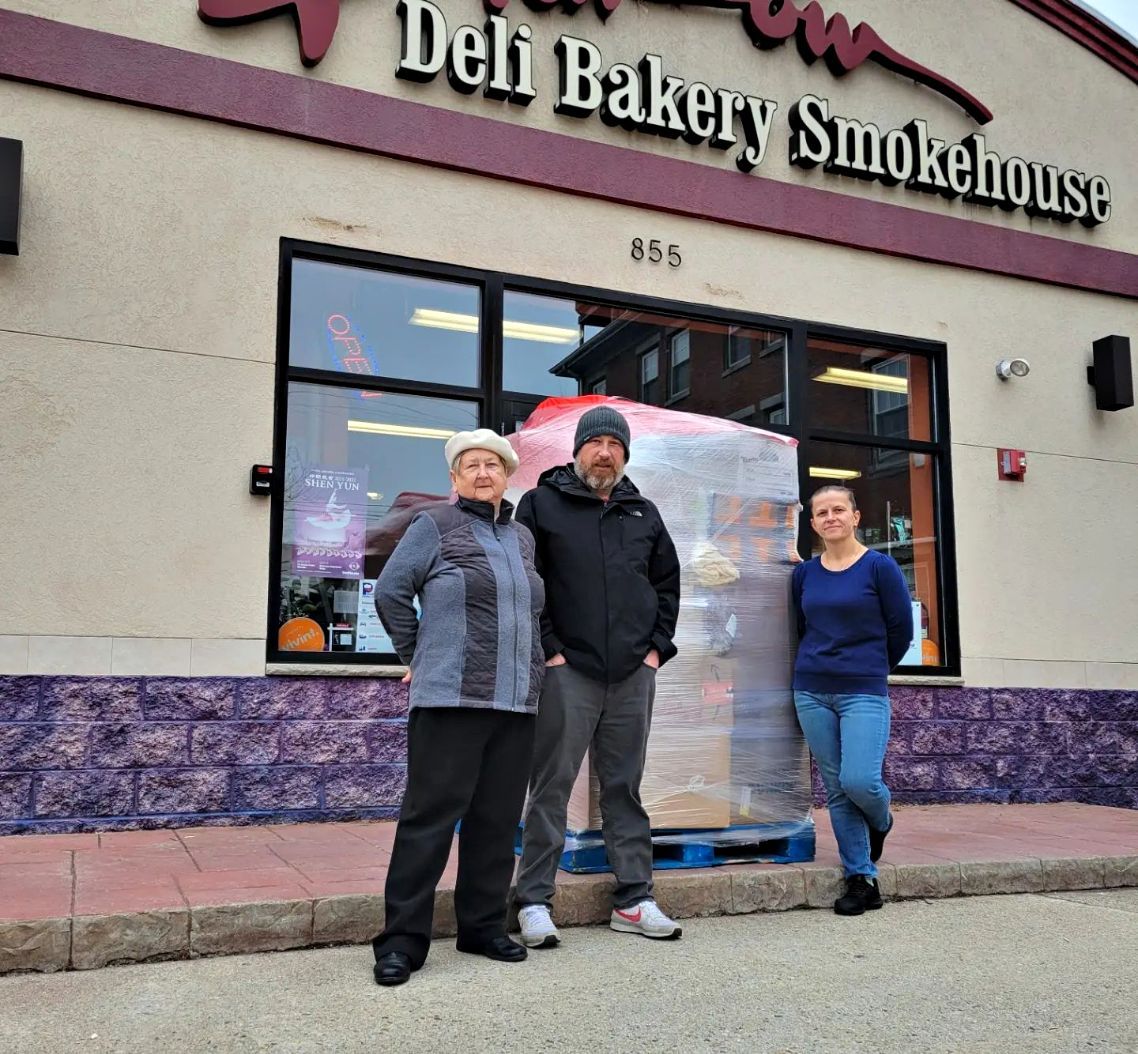 Krystian Przybylko (center), his mother, Zosia Przybylko (left), and volunteer Kasia Arrecis stand with their first shipment of supplies on March 9. Przybylko and his sister and deli co-owner, Marta Samek, are collecting supplies to send to Ukrainian refugees in their native Poland at Krakow Deli Bakery and Smokehouse in Woonsocket.

A Woonsocket deli is on the receiving end of an outpouring of support from the community in its efforts to support Ukrainian refugees arriving in Poland.

Krystian Przybylko and his sister, Marta Samek, are the owners of Krakow Deli Bakery and Smokehouse, a Polish deli in Woonsocket that serves up pierogis, kielbasa, golabki and other national specialties. For the past three weeks, the deli has also offered customers and community members a way to support refugees fleeing the war in Ukraine by collecting supplies and cash donations and sending them back to the owners’ native Poland. According to Przybylko, it was a spur of the moment decision.

“We just saw that there was a need to help. It’s our neighbor, it’s right there, it’s happening in Ukraine and Poland. We are capable of doing it,” he says.

The effort started out small, with a collection of clothing and toiletries at the deli and a fundraising breakfast to help cover shipping costs. On March 6, customers lined up outside the deli for generous helpings of potato pancakes, kielbasa, scrambled eggs and sweet crepes. The event was a hit, and the deli raised enough money to ship one pallet of supplies to Poland. Leftover funds went to the Gajusz Foundation, a Polish organization that assists sick children traveling from Ukraine.

The following week, they did it all over again, shipping four pallets of supplies and holding a fundraising lunch at the deli. This week, Przybylko says, he expects to ship another eight or nine pallets.

“People are messaging me all the time that they are looking for a way to help. Actually thanking us that we give a way to help. I get tons of messages like that,” he says.

Przybylko says he and his sister will begin accepting donations again this Thursday when they free up space after sending out their latest shipment. Among the items needed are personal hygiene products, diapers, inexpensive flip-flops, cloth towels, over-the-counter medications, first aid kits and new underwear for women and children. All of the supplies are donated to Caritas, a Catholic relief organization assisting Ukrainian refugees in Poland.

As the effort has grown, other community members have chipped in to help. Earlier this month, Ilanna Ball, a local business owner, paid for a shipping container to store the donated items that had been taking over the deli. Providence-based artist and AS220 founder Umberto Crenca donated a portrait of Ukrainian President Volodymyr Zelenskyy, prompting a new idea on how to raise funds. In April, Przybylko and Samek plan to auction off the portrait and other donated art and gift certificates in an online auction to support one of the many organizations assisting Ukrainian refugees.

“We have quite a few pieces already,” Przybylko says.

While they did not expect the effort to grow so quickly in such a short period of time, Przybylko says he’s honored that people are trusting them with their donations. He and his sister are from Krakow, where thousands of Ukrainian refugees have settled in recent days after crossing the border into Poland. Przybylko says he is worried about food shortages in his home country with the influx of people and is working with contacts back home to set up an organization dedicated to feeding refugees.

Przybylko and Samek originally opened their deli in Bellingham, Massachusetts, before relocating the business to Woonsocket about fifteen years ago. The two Rhode Island residents also own a second location in South Attleboro, Massachusetts.

At the moment, he says, they are looking for a web designer willing to donate time to create a website where people can bid on items in the charity auction. They will also be accepting supplies again beginning this Thursday and are taking cash donations at the deli counter. Przybylko says they plan to accept supplies until the beginning of April, when they’ll take a short break for the Easter holidays.

“Easter is the busiest time of the year for us, so it’s that much harder,” he says.

Przybylko posts regular updates on social media about what supplies are needed and when volunteers can help package donations. Follow Krakow Deli on Facebook and Instagram for more information.

A Local Ukrainian’s Perspective on the Situation in Her Homeland