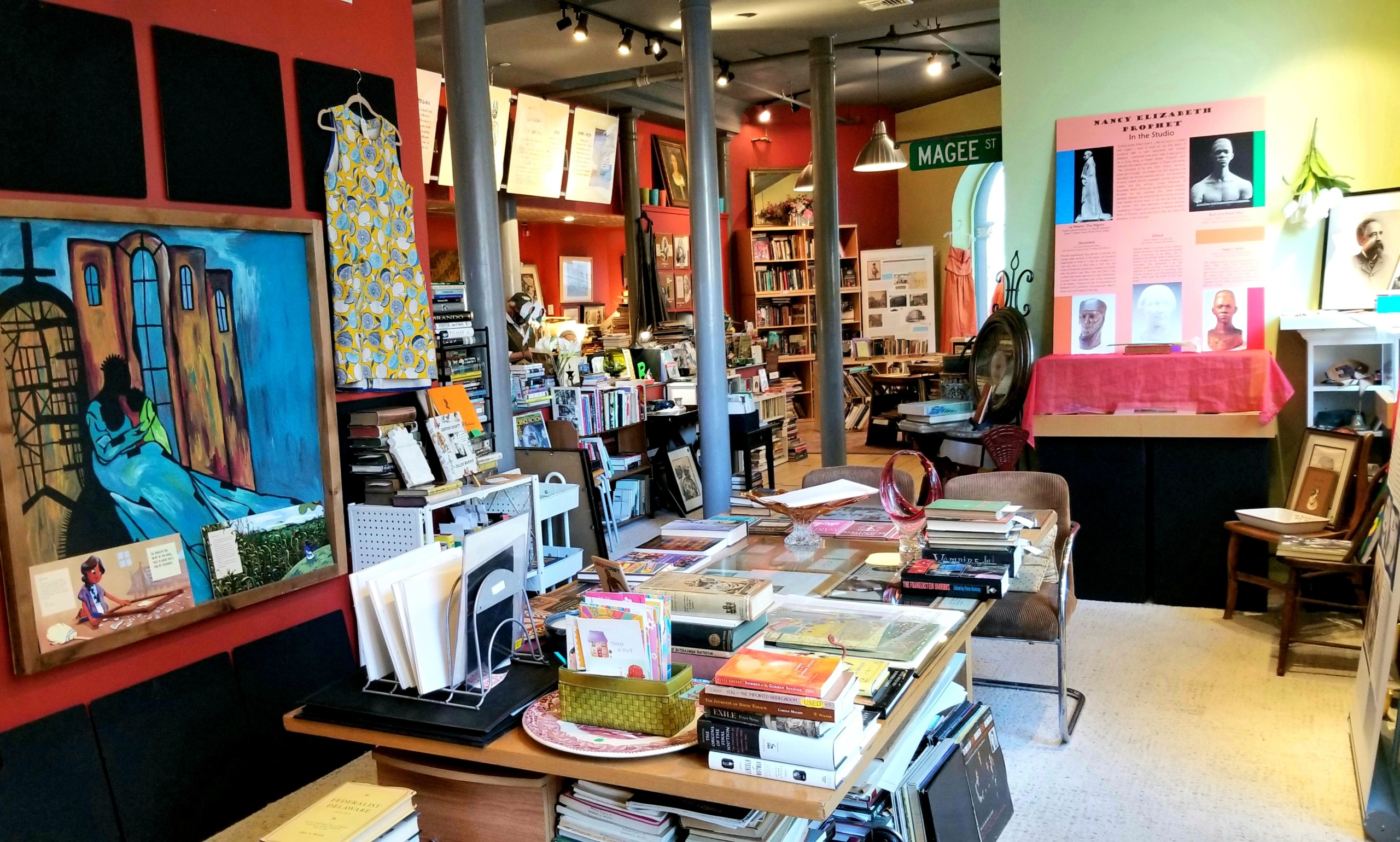 Stages of Freedom hosts a museum of local African American history inside the organization’s headquarters at 10 Westminster St. in Providence.

Step into the room at the intersection of Westminster Street and Memorial Boulevard in Providence, and you might think you’ve stumbled into a different time.

Photographs of Black Rhode Islanders line the walls next to descriptions of their accomplishments. Art and historical artifacts sit in windows or hang from the ceiling, and every available space is taken up with books — from fresh, new paperbacks to tattered first editions — all piled on tables and spilling out of bookshelves onto the floor.

Since 2016, the space has served as the home of Stages of Freedom, an organization devoted to telling the stories of the Black community in Rhode Island and enhancing the lives of its young people through programming. First in these efforts is a swim empowerment program that offers free swim lessons to youth of color. As organization co-founder Ray Rickman readily explains, Black children are five-and-a-half times as likely as white children to drown in a swimming pool, making swim lessons an important equity issue as well as a summer diversion. The books in the Westminster Street headquarters are part of that mission — the organization sells donated books to support the swim program.

Beginning earlier this year, however, the space has also served another purpose. Over time, the organization has amassed an impressive collection of artifacts related to local Black history. Much of that collection is now on display to the public in a gallery-style museum — the only museum, as far as its founders are aware, dedicated to preserving and sharing the stories of African Americans in Rhode Island.

“Museums are built for Picasso, and everybody else is neglected. And we’re not going to do that,” Rickman explains.

“I call them small giants,” he adds. “There are all these Black women in the ’20s, ’30s, ’40s fighting for Black rights. They never get acknowledged, ever.” 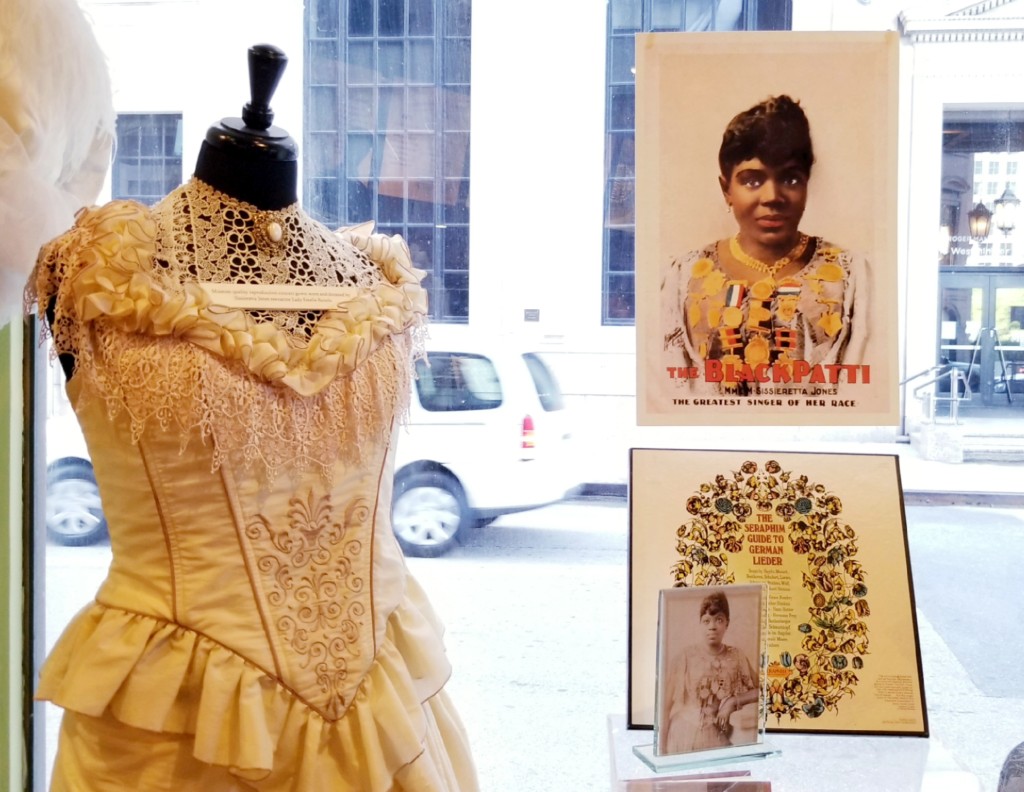 An exhibit on Sissieretta Jones at Stages of Freedom.

Those small giants include women like Sissieretta Jones, a Providence opera singer whose talents were never fully recognized during her lifetime. Promotional materials at the time described her as “the greatest singer of her race,” a designation Rickman says far undersold her talents.

“She was a powerhouse in a time in which women, Black or white, couldn’t do those things,” he says. “She performed for the future queen of England, five United States presidents. She made a living. I believe she was the best singer in America.”

There’s also Elleanor Eldridge, an entrepreneur and writer who owned land in Providence in the 1830s. When a white man tried to claim her property for himself, a group of local white women offered their support.

“These women rallied around her, helped her write a memoir so she could raise the funds to defend herself in a court of law,” Rickman says.

The museum also documents the injustices committed against the local African American community and serves as a record of how those injustices were perceived over time. In 2017, Stages of Freedom was involved in lobbying the city to rename Magee Street on Providence’s East Side to Bannister Street. The first name was after a notorious slave trader from Providence; the second, after Christiana and Edward Bannister, a businesswoman and artist who were prominent Black residents of the neighborhood in the 1800s. The effort succeeded, and the old Magee Street sign now hangs in the museum as a reminder of what was.

“We believe it’s the first removal of an anti-Black monument in Rhode Island,” Rickman says. “You have to worry about history getting lost.” 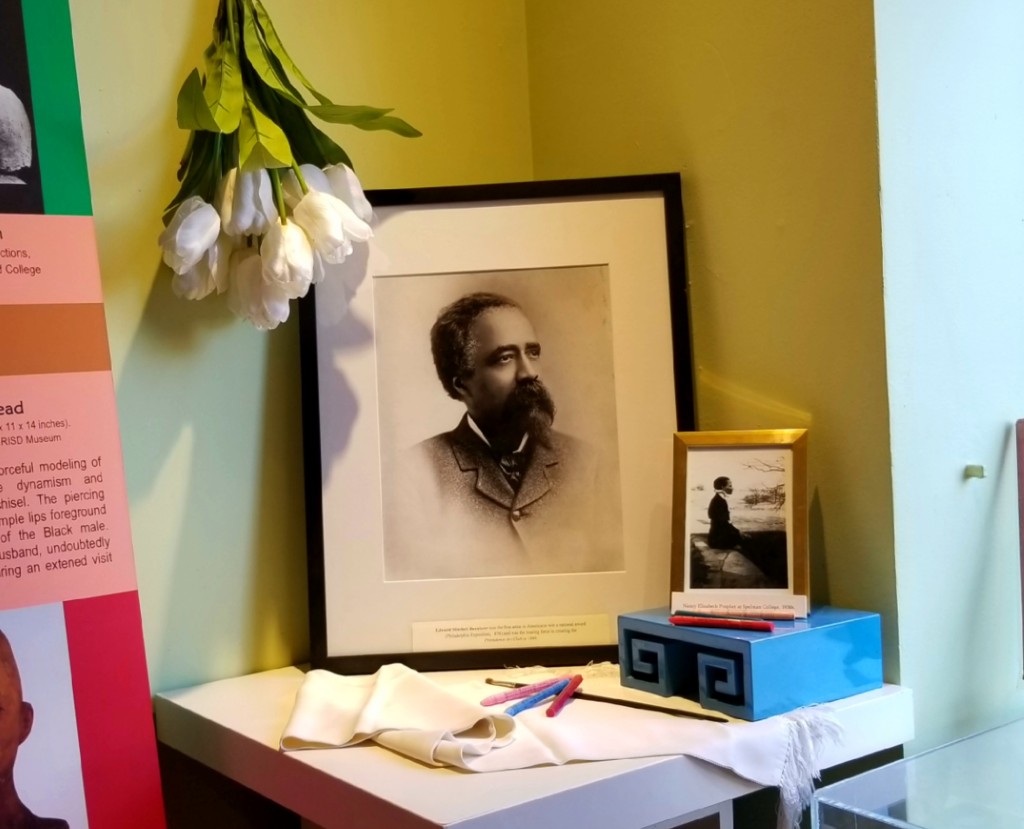 Artist Edward Mitchell Bannister is among those featured in the exhibits.

Prior to this year, the Westminster Street gallery was used primarily for book sales, with only about 20 percent of the space devoted to educational materials. During the pandemic, the organization worked to flip that model, devoting several months to sorting through the collection, according to organization co-founder Robb Dimmick. Now, visitors can browse exhibits on Black Rhode Islanders in fields ranging from the arts to business to education.

A common theme, Dimmick says, is the number of Rhode Islanders who left to pursue their work elsewhere after facing discrimination within the state. Rudolph Fisher, a doctor and author of the Harlem Renaissance, made a name for himself in New York after graduating from Classical High School in 1915. Nancy Elizabeth Prophet, the first woman of color to graduate from the Rhode Island School of Design, was refused entry to a gallery event only to become a famous sculptor in Paris. Charity Bailey, a schoolteacher and the subject of a pop-up exhibit the organization is planning for next year, challenged the Providence Public School District after a superintendent refused to hire her because of her race. She moved to New York, where she pioneered new methods in music education and hosted her own children’s television show. Among her students was Mary Travers, future member of the folk group Peter, Paul and Mary.

“You have these remarkable people doing extraordinary things who are constantly thwarted by slavery and then Jim Crow to the point that they throw their hands up and say ‘We can’t continue to do what we do well in this environment,’” Dimmick says.

“There’s something really exceptional about what happens in Rhode Island that provides the opportunities for Africans and African Americans to achieve, invent, design amazing things,” he adds. “But then they’re constantly quashed by racism. We lost out in the end, because they choose to do what they do well elsewhere.”

Thanks to a grant from the Papitto Opportunity Connection, admission to the museum is free for Rhode Island schoolchildren for the next year, though adults are welcome to make a donation. The space also hosts the James N. Rhea Research Library for individuals researching African American history in Rhode Island. The library, supported by the Providence Journal Charitable Legacy Fund, is named for a Pulitzer Prize-winning reporter who wrote for the newspaper for thirty-three years.

According to Rickman, future expansion plans include a media kiosk for student use and an exhibit showcasing the work of Black artists. For now, visitors can browse the museum Wednesday through Friday from 3 to 6 p.m. and on Saturdays and Sundays from noon to 4 p.m. The shop is also open for book sales and donations at that time.