Relying on it to secure the state's bottom line is like throwing a Hail Mary.

It’s suppertime, two days before Easter, and the Sportsbook, a two-level lounge on the second floor of Twin River Casino in Lincoln, is slowly filling. A ragged line of men bend over their sheets or scan the odds displayed on monitors as they inch to the tills. The walls flash with color and movement from 103 flat screens wrapping the room, like the facets of a fly’s compound eye. At least twenty professional athletic contests are being waged in hockey, basketball and baseball, and everybody hopes it will be a good Friday.

In the back corner by the self-serve betting kiosks, Bob K. sinks an air basket and grins. “I’m betting three dogs tonight!”

He decides he doesn’t like the lines (the odds) on the Pacers-Celtics matchup, so he switches to major league baseball, placing four flat (even money) bets and one parlay (two or more bets rolled into one) on underdogs. Three or four times a week, Bob and his sports betting buddies form a team against the house, benched on a Sportsbook couch or trading tips virtually in a group text. 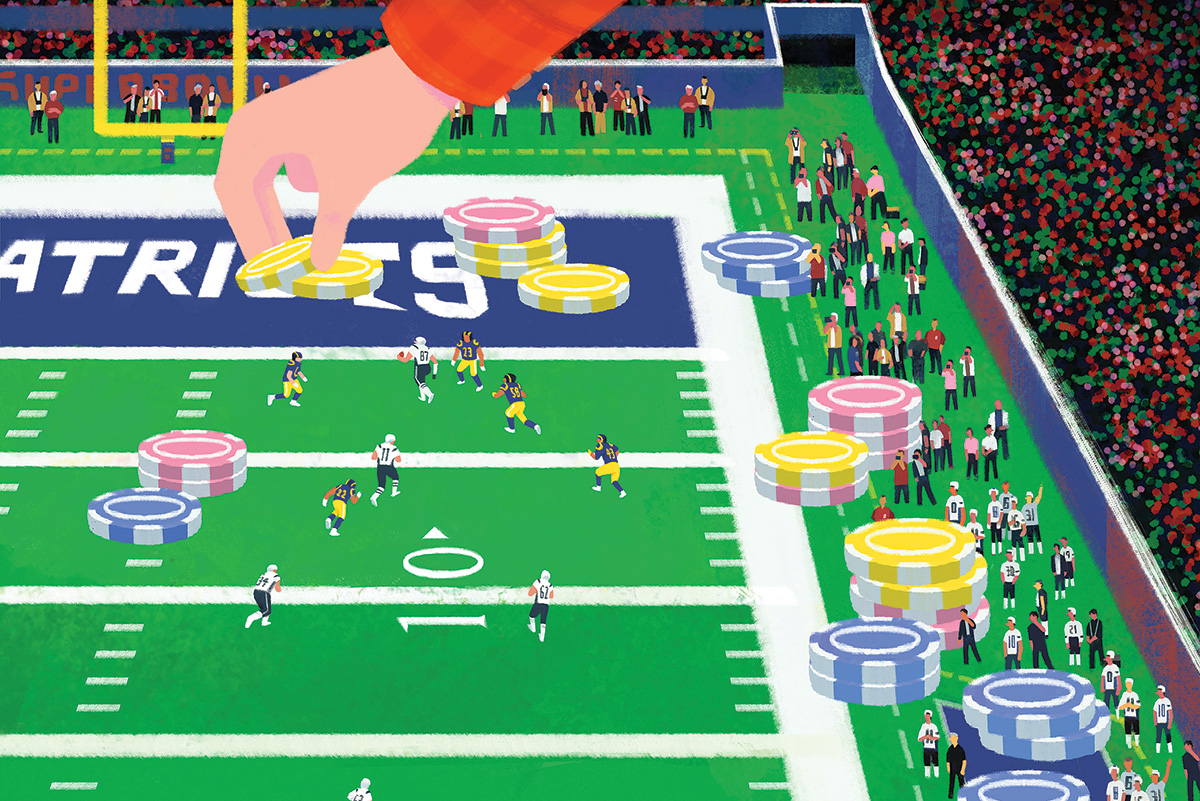 “I like that they made it legal,” he says. “It makes it easier to walk up to a window and place a wager and go over to collect it. If I’m betting offshore, sometimes it will take up to three weeks to get your money. And it’s a nice place to hang around. I’ve met a lot of people I wouldn’t have met from all different walks of life.”

Bob placed his first $2 bet when he was fourteen years old on a longshot named Miles Love at the old Lincoln Downs. He won $52.80 — twenty-five to one — “and it’s been all downhill ever since,” he says with a laugh.

Rhode Island’s first foray into sports betting has not paid off nearly as handsomely. At the five-month mark, the state had garnered a tiny fraction of the projected revenue. From November to March, sports bettors wagered $77 million and won $75.2 million, leaving the hold at $1.85 million and the state’s share at roughly $943,000.

A late start deep into football season forced officials to slice its estimate to $11.5 million. The combination of New England champion teams and hometown bettors was another loser for the state. The Patriots’ Super Bowl win over the Los Angeles Rams, thirteen to three, pushed the hold $890,623 into the red. In May, the state Department of Revenue presented newer revenue projections: $2.6 million by the end of June.

“With each month that passes, we are learning about where people are placing wagers,” says Gerald S. Aubin, director of the Rhode Island Lottery. “When the Office of Budget and Management came up with the forecast, it was reasonable money. We have not quite made that number. But we don’t focus on just one line-item. Our menu of games is extensive; sports betting is just one. Hopefully, we will aggressively expand our other lines so our overall budget projections can be met for the end of the fiscal year.”

In May 2018, the United States Supreme Court struck down the Professional and Amateur Sports Protection Act (PASPA). The 1992 law barred states from permitting sports betting if they had not already legalized it. Oregon, Delaware, Montana — which had offered limited sports lottery games — and Nevada, where widespread sports betting was legal, were grandfathered in. The Supreme Court ruled, six to three, that the ban violated the tenth amendment, which addresses state sovereignty. The case pitted New Jersey, which had passed legislation in 2012 allowing sports betting, against the National Collegiate Athletic Association and the four major professional sports leagues, which argued that the law violated PASPA.

The social prohibition against sports betting has deep roots. In 1919, eight members of the Chicago White Sox were accused of taking a payoff from an illegal gambling syndicate to lose the World Series to the Cincinnati Reds. The Black Sox scandal led to the creation of a Commissioner of Baseball. And despite being acquitted, the defendants were given lifetime bans from the game or any post-career honors.

By 1989, the illegal sports handle had risen to an estimated $29.5 billion, along with concerns about organized crime, match-fixing and the numbers of compulsive gamblers, particularly teenagers. New Jersey Senator and former NBA star Bill Bradley argued that sports betting debased the game. Even after PASPA passed, worries about gambling’s assault on the integrity of collegiate sports continued. Senator John McCain opened a 2000 United States Senate hearing on a bill to prohibit betting on college sports noting point-shaving schemes, gambling among college referees, the “epidemic” of campus gambling and money laundering.

“When you think of the sheer volume of betting, the point-shaving scandals and bribery — it’s really small,” says Becky Harris, former Nevada Gaming Control Board chairwoman and an academic fellow at the University of Nevada Las Vegas’ International Center for Gaming Regulation. “At least the ones we hear about all happened in the illegal market. The books are watching what’s happening to the lines, and reporting suspicious activities to the appropriate law enforcement authority.”

Lawyer Zach Schreiber, a former sports agent and author of a law review article urging the United States to use the United Kingdom’s regulatory scheme as a model, says legal sports betting is good for sports.

“I do not believe the players consider sports betting at all. The players I have represented don’t know the lines and don’t care about the lines. They are trying to win,” he says. “On the business side, sports betting increases a team’s exposure to the public. The leagues are going to gain higher viewership in these very long mid- to late-season games, and that’s good for the higher ad revenue, higher viewership and social engagement.”

States on an aggressive hunt for revenue also saw opportunities for growth and moved swiftly to enact laws. By April, eight states were open for business. Rhode Island passed its legislation in June 2018, with the revenue split three ways: the state would collect 51 percent; International Game Technology, which provides the state with slot machines and other gambling technologies, and William Hill, which sets the lines, split 32 percent. Twin River, which hosts the operation, gets 17 percent.

The rollout was bumpy. The self-serve kiosks were not yet online, and the overwhelming demand during the Super Bowl meant gamblers waited up to two hours in line, missing their window to place a wager. Twin River originally separated the bettors from the employees taking the bets with security glass, but they couldn’t hear the customers or understand them.

“A customer would say, ‘I want to drop a dime on TB12.’ The correct way to announce that wager was $10,000 on Tom Brady — the Patriots to win,” says Twin River Vice President and General Manager Craig Sculos.

In the first four months, Twin River was still scoping out the bettors (a younger demo) and their preferences (finger foods) to adjust their settings. “It’s hard to quantify, but we are seeing an increase in foot traffic,” he says. “It’s colorful and it’s vibrant. We refer to it as the ultimate tailgate party inside.”

But if the state wants to make its nut, it may take more than snappy slogans.

The AGA’s Slane says the house margins on sports wagering are thin; 95 percent goes back to the bettor. Las Vegas, which has offered sports betting since 1975, recoups 5 percent of the handle. And to get there, you need to win consumers away from the illegal offshore betting websites with a mobile platform and a reasonable revenue-sharing scheme. Rhode Island’s 51 percent gross gaming tax rate is the highest in the nation. The General Assembly sanctioned mobile betting in March, and state lottery officials expect it to be operational in time for football season.

The legal sports books “have to pay taxes, they have to pay for marketing and advertising. The legally regulated operator has a challenge to compete with the illegal operator, who can offer better odds because they don’t pay the same overhead,” Slane says. “But it’s still extremely early. This is a whole new frontier for this country, and no one state is going to pull the stick and the floodgates open and the revenue is pouring in the door. It takes time.”

The underdogs delivered for Bob K. on Good Friday. He happily pocketed $560 in winnings. But his loyalty to Twin River has yet to be tested. He expects mobile betting to cut down his visits, and if and when sports betting comes to Massachusetts, he’ll check out the scene at Plainridge Park Casino, just twenty minutes from his home. His group is sore that sports bettors aren’t offered the same complimentary perks as Twin River’s other gamblers.

“I don’t think it’s fair to the sports bettor. It’s a sticking point. We all complain about it,” he says.

The threats are also coming from within: A GOP lawsuit filed in May challenges the constitutionality of the law because voters did not approve this expansion of gambling. The state better hope that luck is a lady.