Can Small Farmers Make It Big in Rhode Island?

The state is exploring programs that connect farmers with large-scale institutions.

By 10 a.m., an angry sun had wilted Alby Brandon’s customers. More than once, a customer thanked Brandon for setting up shop at the Wakefield farmers market on a 95-degree Saturday. More than once, Brandon shrugged it off with a smile and a “We-never-miss-a-Saturday-unless-it’s-a-hurricane.”

Brandon, twenty-six, established his farm in 2015, on three acres in West Kingston. Today, he produces a wide variety of produce on eight acres, selling at the East Farm farmers market and filling wholesale orders for Belmont’s Market and Whole Foods.

Barefoot, in his favorite loose farming pants, Brandon seemed unfazed — even cheery in the deadening heat. After a cool and rainy spring, the mid-summer bounty of Brandon Family Farm drew a steady stream of customers appraising the golden beets and evergreen bundles of kale. Making quick addition on a scratch pad, Brandon broke tens and fives. Farm math, like any business math, is the simple subtraction of production costs from the selling price. Brandon’s done pretty well, turning a profit averaging 30 percent, from year one. But he’s always experimenting with new crops and looking to expand his acreage and broaden his customer base. 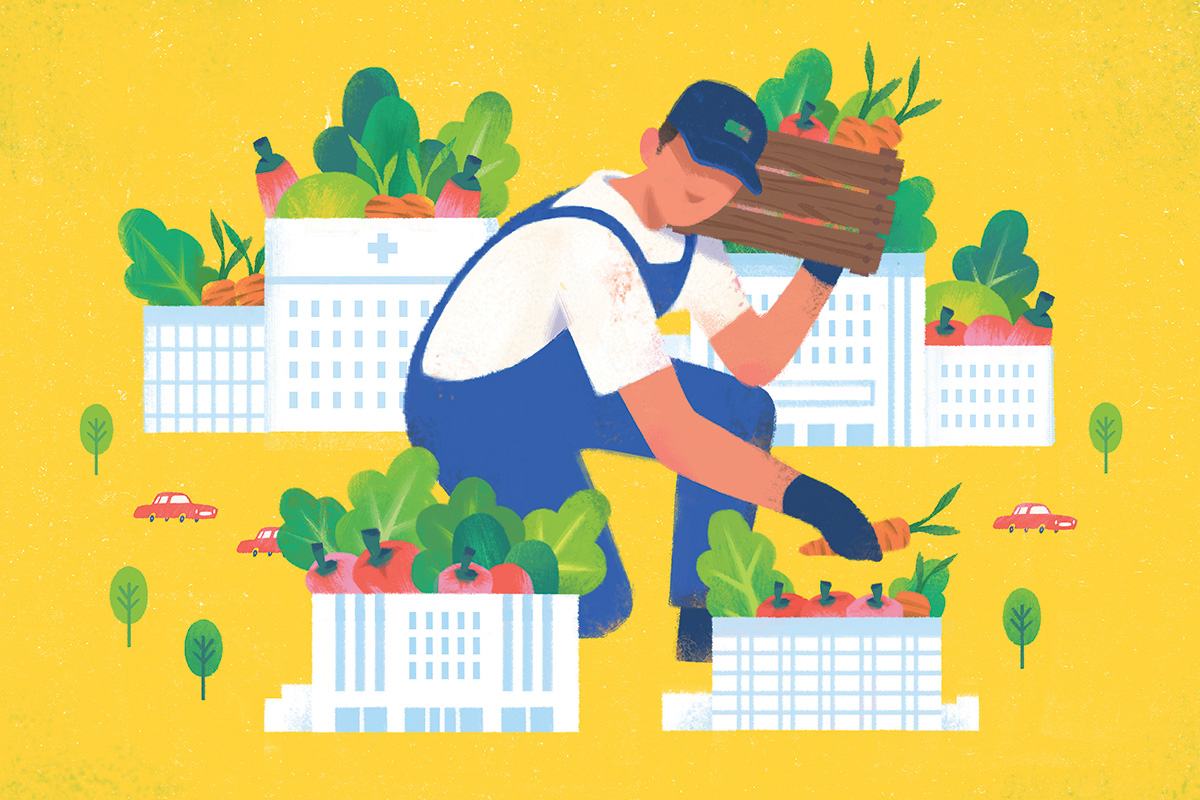 “I like having a direct relationship with my customer, but I would like to not rely on farmers markets, because the volume of sales is too low,” he says. “We’re always looking for new markets.”

The state, in concert with a variety of agricultural advocacy and sustainability groups is working hard to make institutional sales — to schools, hospitals and correctional facilities — one of them.

“Our strategy for a long time has been to focus on retail and that has been successful, but it’s softening a bit. The next phase is to explore and enhance the institutional market,” says Ken Ayars, chief of the Department of Environmental Management’s (DEM) agriculture division. “It’s a bit more complex to sell to institutions, so we are trying to level the playing field, by promoting them.”

In some ways, it’s a natural fit for New England farmers, says Peter Allison, executive director of the nonprofit Farm to Institution New England, which works with the public and private entities to expand institutional markets. The typical New England farm is small, with a variety of products, compared to its midwestern or California counterparts, which may produce one commodity exclusively for out-of-state destinations.

“Historically, we’ve had a strong farm-to-school network that’s driven the growth of the movement regionally. The Northeast is also home to premier institutions of higher learning and health care, and some of the regional leaders are national leaders, with very effective programs,” he says, citing Brown and Roger Williams University as local examples.

Nonetheless, there is room to grow. According to the most recent USDA census, in 2017, the state’s 1,043 farmers sold 6 percent of their $58 million in sales directly to retail markets — including institutions.
In 2016, Governor Gina Raimondo hired the state’s first, and the nation’s only, director of food strategy, Sue AnderBois. The following year, the state launched Relish Rhody, a five-year food strategy plan that includes growing the agriculture and fishing industries and finding markets for their products. This effort has knit together state agencies like DEM, the Commerce Department and the Food Policy Council with producers, marketers/distributors, like Farm Fresh RI, food business incubators, like Hope and Main, and large buyers, like universities.

“There’s a lot going on in Rhode Island that’s unique,” says Nessa Richman, executive director of the Food Policy Council. “And we don’t just work on the demand side. We simultaneously work on raising the capacity of the institution to buy more local food and raising the capacity of the farmers to produce.” Pivoting to the institutional market, she adds, “will take a systemic, holistic view to make it a reality.”

Already, a variety of public and private entities are laying the pipelines. SupplyRI, a Commerce Department initiative that focuses on encouraging institutions to buy more Rhode Island-based goods and services, includes food.

Farm Fresh RI’s Market Mobile aggregates the products of more than 100 farmers and matches sellers with more than 300 wholesale buyers using an ecommerce platform and a fleet that delivers produce throughout Rhode Island, and parts of Massachusetts. The program has sold more than $16.4 million worth of food since 2009.

“One single farmer can rarely provide enough product for larger customers, so we allow them to access products across the state with one invoice and one delivery,” says Sarah Bernstein, Market Mobile’s program director. “We help manage the relationships between sellers and buyers, and for the farmers, we are paying them every two weeks, so it’s a steady income stream in what can often be an unpredictable season.”

Rhode Island is an avid competitor for the Henry P. Kendall Foundation New England Food Vision Prize, the regional Oscars of farm-to-institutions. Each year, applicants vie for $250,000 grants, awarded to collaborative projects among colleges and universities to promote healthy eating and agricultural sustainability. Last year, RISD and Johnson and Wales University were among the winners for a plan to develop institutional dining products for Farm Fresh RI using surplus New England produce.

Now that the harvest is in, AnderBois expects to convene farmers to figure out how to make the state’s various initiatives more robust.

“My constant drumbeat is: we don’t want to propose programs or policies that farmers don’t want or need,” she says.

For many institutional customers, buying local food is a commitment they are happy to make. The state’s sole public school self-operating food service, North Kingstown, spends 33 cents of every food dollar on local produce, about $75,000 last year.

“North Kingstown itself is a pretty agricultural community — it’s part of life here,” says food service manager Patricia Cawley. “It’s a positive morale builder for staff and for students to know where their food comes from. You’ve never seen excitement until you see carrots in elementary schools with greens on top.”

“Close to 90 percent get free or reduced lunch, a large portion of which is reimbursable through the federal government,” says Rachel Newman Greene, the deputy director of the City of Providence’s Healthy Communities Office. “Our goal is to make sure those dollars are benefitting the local economy as much as possible, and as much food purchased is locally sourced.”

The greater challenges may lie on the supply side. Currently, the state only produces an estimated 3 percent or less of its food needs. Agricultural acreage is expensive and in scarce supply. The DEM’s Ayers is looking to build capacity with newcomers like Gotham Greens, expected to open this fall. Using hydroponic methods, Gotham Greens “can produce in one acre what it would take thirty conventionally farmed acres to yield,” says CEO Viraj Puri. “Our form of farming is very water-efficient, and eliminates chemical and agricultural run-off. We could service the institutional market in Rhode Island easily.”

Price is another point of contention.

“Most farms are not having trouble finding an outlet for their products. The issue is not being lucrative enough,” says Heidi Quinn, executive director of the Farm Bureau. “Our goal would be to have as much local food sold to institutions as possible, however farms have to consider the cost to produce and what they would receive in a farm-to-institution contract.”

Johnston’s Pezza farm has been selling 10 percent of its vegetable crops to Sodexo for a decade. Celebrating seventy years of farming in Johnston, the Pezzas see their institutional sales as an opportunity to build relationships.

“To us, it’s more important to have that connection with the community, to teach children the importance of buying local and of supporting local farms,” says Doreen Pezza, a second-generation farmer. “Everybody loves the farm, but it’s getting harder and harder to be a farmer.”