Secrets in the Kitchen is More Than Just Sauce

Karen Greene's marinara business launched out of Hope and Main and is growing by offering more cooking classes. 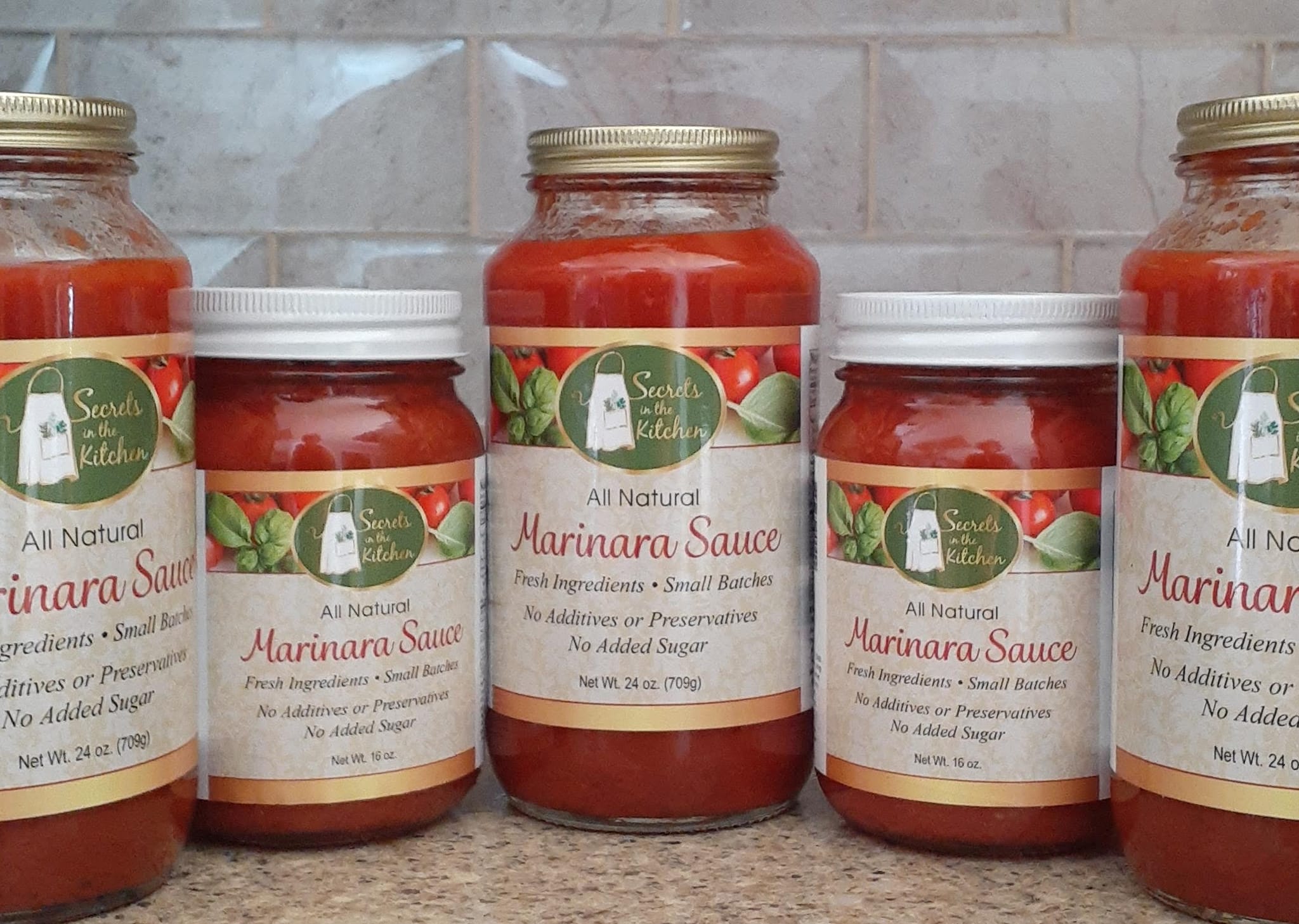 Sauce by Secrets In the Kitchen.

Karen Greene launched her business, Secrets in the Kitchen, based on learning to cook from her mother (who actually learned to cook from Karen’s grandfather). She creates different dishes — from Italian fresh pasta to Lebanese specialties handed down by her grandfather – but the main force behind her work is the sauce. The only problem was that there was no written-down family recipe to replicate.

“[My mother] would show me how to make things, but there were never any measurements,” Greene says. “It was always a secret, because she never measured. I would come home from school and start dinner, and she’d say ‘a little less salt.’ Or ‘a little more of that.’ Then my father would taste it, put his hand over his heart, and say, ‘It’s just like your mother’s.’ ”

She heard stories about her grandfather growing up in Lebanon and cooking all the food for the family by visiting farmers and forming relationships with food producers. He was the one who taught her mother how to cook. He had his own garden, made his own wine and even produced homemade sausage. “I do all of that now,” Greene says. “It’s a tradition.”

Greene – who previously was a kindergarten teaching assistant for twenty-seven years at the Fox Point School, now Vartan Gregorian Elementary School – wanted a second chance at a new career while she thought about retirement. “I knew I was going to do something else because that wasn’t going to be for the rest of my life,” she says, adding that she has always loved gardening and cooking at her Barrington home. “I thought of Hope and Main and how maybe this is the place for me because when I leave here, I want to be able to go right into something.”

She met up with Hope and Main founders Lisa Raiola and Waterman Brown in 2014 and they recommended she focus on producing one item, which was the sauce. Greene spent two years perfecting her methods to get a consistent recipe right. “During the time I was working, I was getting my licenses and taking all the courses I needed so that I could go right into it,” Greene says. “Hope and Main was an amazing place to be because they helped me from moment to moment, like ‘This is what you need to do.’ ”

It took awhile to design a label and get the business up and running, but that was okay for the now-retired teaching assistant. “I am still very slow moving in my business, which is fine with me because I am retired. I am not in a rush to get anywhere,” she says.

She is working with Trafford Kane to produce the sauce on a larger scale at Hope and Main. He has his own product, Kane’s Kitchen small-batch salsa, and Greene hired him for more help to produce her product, which is available at Hope and Main’s Meet Your Maker and Schoolyard markets, Stock Culinary Goods in Providence, Prica Farina in Warren (the sauce pairs perfectly with their pasta), the Black Pear and Barrington Butchery in Barrington and several other places.

However, she does not see her business only being about sauce. She’s recently started offering cooking classes at a friend’s restaurant, Mediterranean Grille in Seekonk, Massachusetts. The next one is on Mon., Feb. 7 at 6 p.m. and it will cover how to make crusty Italian bread with Italian food. Six Pack Brewing in Bristol will also host Greene on Feb. 24 from 6-8 p.m. for a pasta and sauce and beer pairing event. A third class, the Art of Pasta Making (includes fresh pasta demo, pasta tasting, glass of wine and recipes) will also be held on Tues., March 8 from 6-9 p.m. at Riviera Restaurant in East Providence. Greene also offers private lessons.

“Teaching class is something I love to do and they get a lot out of it,” Greene says. “I had a mom call me and say, ‘My daughter can’t cook. Can you teach her to cook?’ and she gave the lesson to her as a gift. A gentleman also gave his mom a gift at Christmas so all of his siblings could get together and cook in his mother’s kitchen. I’m teaching them to make pasta.”

She’s ready to expand this sequel to her sauce business. “I am just doing what I love,” she says. “My business is Secrets in the Kitchen. It doesn’t mean all I do is make pasta sauce.” secretsinthekitchen.com 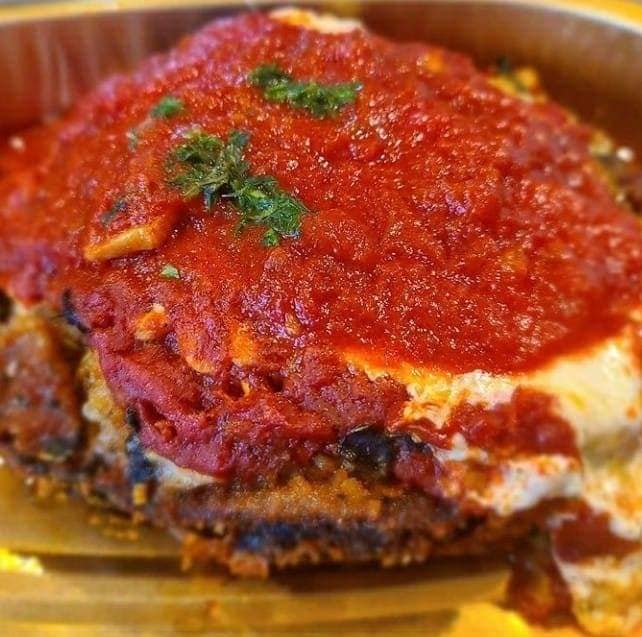 Makes 12 servings if you use 4 slices per serving

2 bulbs garlic for roasting and spreading

Slice eggplant into ⅛-inch thick slices. There’s no need to peel. Discard ends but only use the fattest part of the eggplant. Reserve the smaller slices for another dish. (You may have 8 slices per eggplant.) Use 4 slices of eggplant per person.

Prepare a two-handle fry pan with four cups of vegetable oil and heat until the thermometer reads 375 degrees.

While oil is reaching temperature, use a paper towel and cover sheet pan with extra virgin olive oil, and preheat the oven to 400 degrees F. Slice tomatoes thin. Lay them on the sheet pan, drizzle EVOO, sprinkle with Parmesan cheese and some parsley on each slice of tomato (1 slice per serving of eggplant). Bake for 10 minutes. Remove from the oven and let cool.

Roast garlic in peel in olive oil at the same oven temp for 20 to 25 min. then set aside. Squeeze garlic out and mix with a fork into paste

In a large bowl, add 1 cup seasoned breadcrumbs and ¼ cup (in this ratio as needed) panko crumbs and mix together.

In another bowl, crack two eggs and whip with a fork or pastry whip.

In another bowl, mix ricotta with the eggs, 1 Tbsp of parsley and 1 Tbsp Parmesan.

Open one jar at a time of Secrets In the Kitchen marinara, and pour the whole jar to cover the bottom of the baking pan.

Slice the mozzarella into 24 slices or get it pre-sliced.

Prepare to dip sliced eggplant in egg, then breadcrumbs, then fry in heated oil.

Lightly brown each side of each slice and place on a dish set with paper towels to drain excess oil. Continue until all the eggplant is lightly browned and drained.

Get ready to layer.

Bake at 350 degrees for 40 minutes until eggplant is tender, and sauce and cheese are bubbly. Let sit for fifteen minutes before serving.

Date and Gift Ideas for Valentine’s Day in Rhode Island