The Providence-based abstract artist, whose recent work explores race and identity in America, revels in the gray areas. 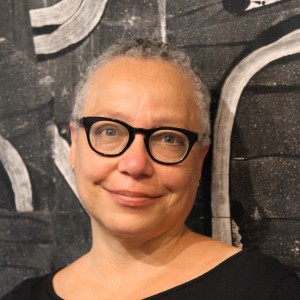 Rhode Island Monthly: What pushed you to become an artist?

Toby Sisson: That’s an interesting question, because it’s not just one thing. I came from a very creative family. They were not visual artists, but they were creative in all of the things that they did, and I found that really inspiring. I also had lots of friends who were in the arts, usually performing arts. I knew a lot of musicians and a lot of people who were active in the arts community. I found that an attractive and lovely place to be. That kind of pulled me in that direction initially.

I also remember that, as a very young child, the thing that could hold my attention probably for the longest period would be if my mother would just give me any kind of writing tool, and instead of writing something, I would draw something. So, sheet of paper, back of an envelope, and a crayon, and I was good for hours. I could keep myself entertained. I remember having that happen a lot.

Then, maybe lastly, early on, my mother took me to museums. I was a kid growing up in Minneapolis, and the Minneapolis Institute of Arts at that time, and probably still is, was a free museum. It has this gorgeous encyclopedic collection, but it doesn’t charge admission, it just has a sort of suggestion box at the entrance. So when I was a little kid, my mother would take my brother and I to the museum, probably because they had air conditioning and it was free and it was something that would keep us occupied. My brother didn’t care for it at all and I adored it. That planted some early seeds. 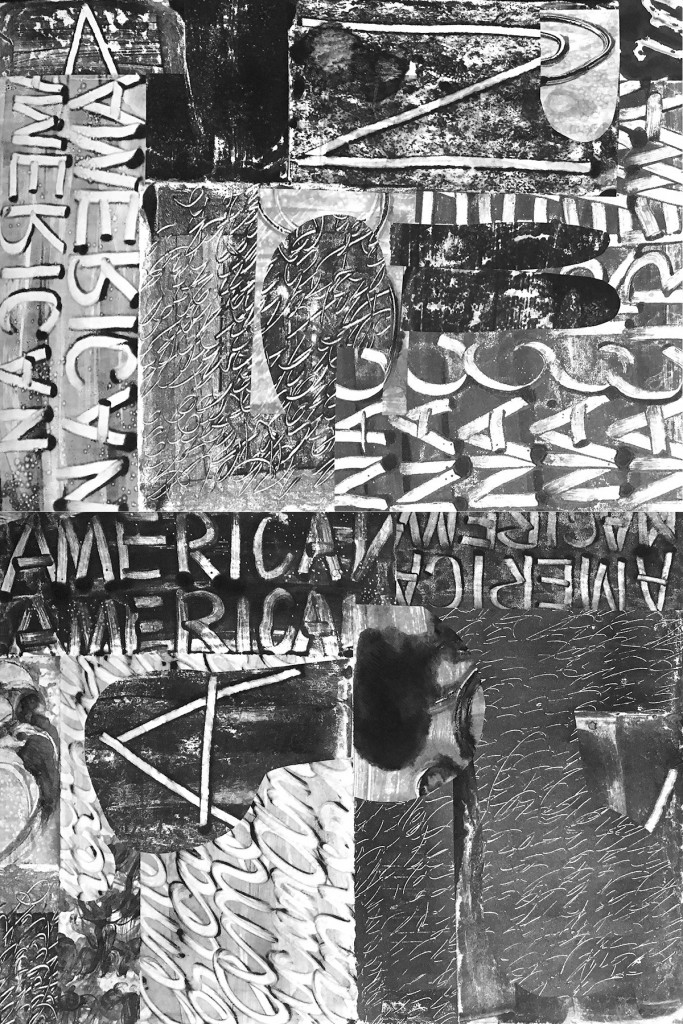 RIM: What motivates you to make your pieces?

TS: Well, it depends on the piece, or what series I’m working on. I would say, for the most part, in recent years, my imagination is captured by what’s going on in the world. I’m really plugged into what’s happening in the world politically, socially, economically, environmentally, and I pay attention to what’s going on in, not just my own life, but in the life of everyone on the planet. I sort of listen for that buzz of what’s really interesting, what’s happening now, where are other people’s imaginations going. That often starts a series for me, and the content of the work will often revolve around things that are socially engaged.

RIM: Do you have any specific sources of inspiration?

TS: Sure! Other artists! Sort of my early introduction to arts was by being around other artists and looking at artwork and trying my hand in it myself early on. I’m still very much inspired by looking at other artists. I probably have an obscenely large collection of artists’ books, not necessarily all handmade, but monographs that are about artists. I could amuse myself for endless hours just spending time looking at work by artists that I admire and thinking about what ideas they’re planting in their art and where those ideas might come from. So that’s another place of inspiration for me.

I’m particularly interested in artists who are able to work with abstraction and yet communicate concrete ideas. So they don’t necessarily need figurative or nameable objects or images within their work in order for the work to feel as if it’s loaded with ideas and imagery that I can understand and translate and apply to real thoughts, even if the work is not objective abstraction. That’s what fascinates me most. That, and a lot of text-based work lately as well. 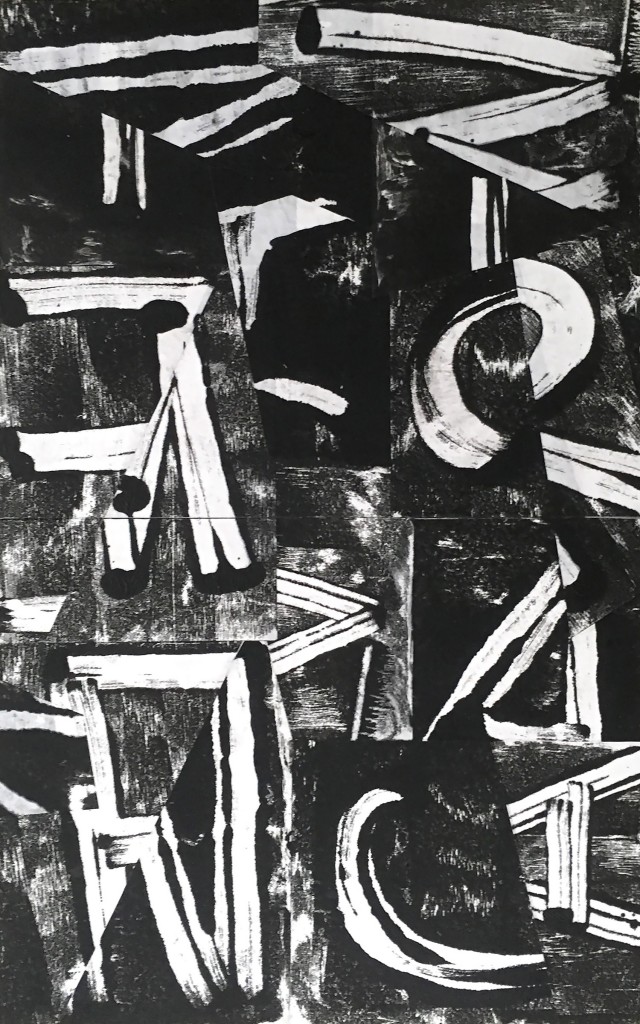 RIM: How did abstract art become your main form of expression?

TS: It happened when I was an undergrad in art school. I went to a really traditional art school that stressed the fundamentals and foundational work, and there were hours and hours and hours in an art school education of learning how to draw the figure or learning how to translate perspective. There was a lot of time doing those kinds of rote activities, and there was a period of which I felt as if, in order to be able to draw something that looked like what you could recognize, that was the mark of excellent art. I wanted to achieve that mastery and that sort of facility to be able to do that. But it quickly became something that was a little less interesting than I had thought it would be, or than I had hoped it would be. It became a skill that I could use to sort of impress myself with my abilities, but it wasn’t really that compelling, and it became kind of — well, “boring” isn’t quite the right word, but it wasn’t fulfilling enough. And I found that the language of abstraction offered me a lot more possibilities. It seemed almost endless with what could be done in abstraction: the interpretations were a lot more open, the audience could be engaged in different ways, and I could look at an abstract work and perhaps not see the same thing twice. I found that really, really interesting, and a kind of endless source of feeding my imagination.

RIM: Could you tell me more about what your pieces may represent?

TS: Again, it depends on the piece. I don’t have all my pieces represent “X.” My recent bodies of work have been about race, identity, history, ethnicity, nationality — they all surround around issues of race and thinking about what’s being animated in America and across the world today. That’s what I’ve been working on I would say for the last better part of a decade. Between eight and ten years, that’s really been the focus of my work. 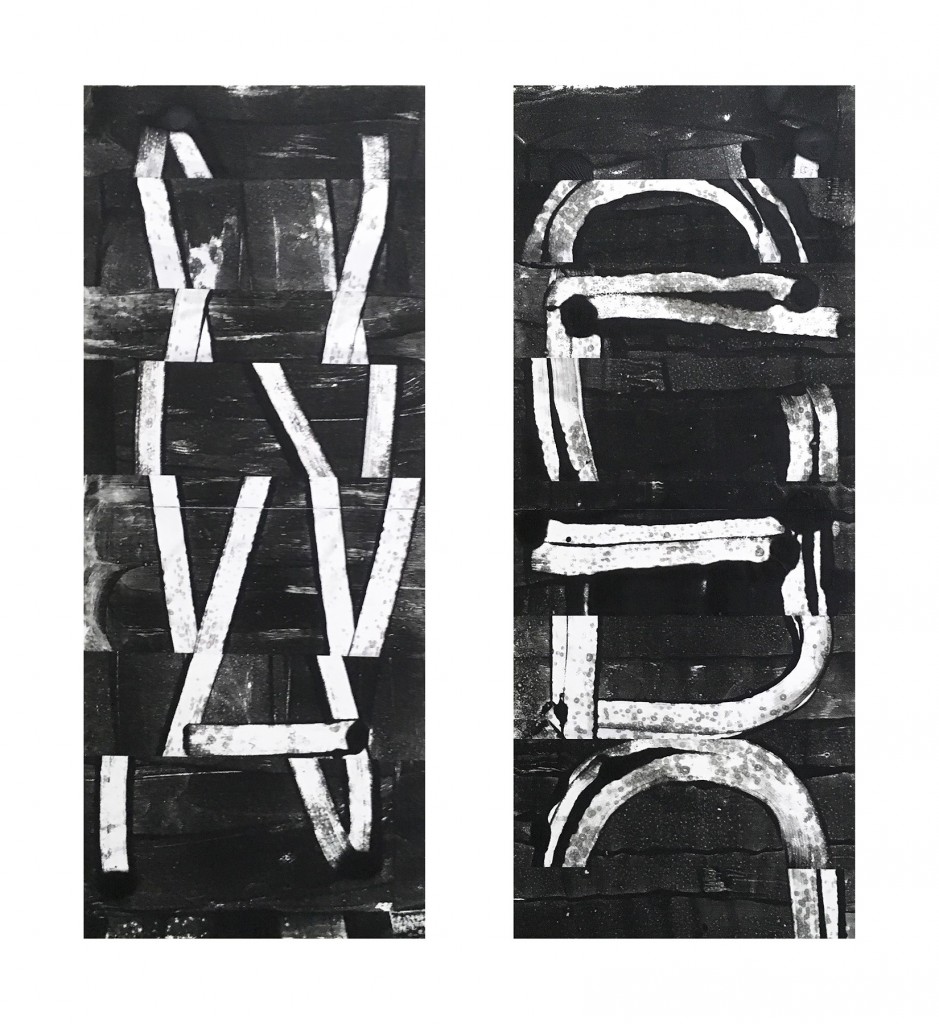 RIM: I really liked the pieces for the Deconstructed American series.

TS: That whole series really grew out of the idea of what it means to be an American and how varied that is across ethnicities, nationalities, geographic locations within America, and age groups (so it’s generationally different). And I was thinking about how the idea of Americanness is so fluid and how it’s changed over time and what that might mean for me as an individual.

It also grew out of my father’s own history. He’s no longer with us, although I feel that he’s with me every day. He belonged to a social club called the naciremA, which is really just “American” spelled backwards, and it was a sort of subversive social club for African Americans that was a way of signalling that you were forming something that was new because you couldn’t fully be a part of what is the American identity. So, really literally flipping “American” into “naciremA” was a way of saying, “I’m still American and yet I’m identifying with this other way of being in the world.”

Of course, the reason for doing that was because African Americans, for a very long time, were excluded from joining other organizations that were more mainstream. So, out of a series that I created called naciremA, I started then going and making a series called Deconstructed American where I literally was taking the word “American,” printing it out — I was creating encaustic monotypes using the hand-lettered word “American” — cutting it apart, and then putting it back together in a way that allowed me to play with really taking apart, not just the word “American,” but the idea of “American.” How small, how fractured, how broken could I make a very recognizable word and idea, and kind of an icon, and rearrange it and still have parts of it be recognizable? What does that mean to really take apart being American? So I decided that literally: taking it apart and putting it back together again. It became fascinating to me, partly because I like letterforms and typography and art that’s language-based. It also gave me a way to play with other binaries. My work in recent years has been predominantly black and white, and so I could look at issues that were very identifiable racially and coded between black and white, and then also very graphic because that’s how we usually see text: black ink on a white page. I could play with lots of different ideas, both conceptual and formal, and continue to work with concepts of Americanness and what that might mean.

RIM: I saw that you teach at Clark University in Worcester, Mass. What’s your favorite part of teaching art?

TS: My favorite part of teaching art is absolutely the students! They always bring something surprising and fresh and optimistic and an energy into the classroom that I gain from. It’s definitely a two-way street, and not just delivering information on part of a learning community when I’m with my students. So that’s definitely my favorite part.

RIM: How does it feel having your art displayed around the world?

TS: It’s kind of exciting! But my art is more well-traveled than I am. There’s places where I’ve exhibited that I have never been. I don’t often have an opportunity to go to all the places where my art can travel, but there’s still time.

RIM: Is there anything else you’d like to add about you and your work?

TS: My work for me is a way to try and understand the world. It’s why creators create things. It’s a dialogue you have with the outside world, with other people. It’s also a dialogue you can have with your materials. I find it to be an enormous pleasure, so for the same reasons I really just like to be alone with a crayon and an envelope and making pictures when I was a little kid, I still can retain that feeling and revive that for myself at this point in my life. It’s just the most fun that I can imagine having.

For more information on Toby Sisson’s work, visit her website at tobysisson.com.