Hazard maintains the traditions of the Narragansett people with his wampum jewelry and walking sticks.

Allen Hazard, owner of the Purple Shell shop at the Fantastic Umbrella Factory in Charlestown, threads a wampum bracelet between his fingers. The beads, which are made from quahog shell, range in color from lilac to deep purple with pale white in between.

“These traditional tubular beads are what people come to see me for,” says Hazard, a member of the Narragansett Indian Tribe. He is widely regarded as an expert on wampum and was featured in a short Rhode Island PBS documentary on the practice.

The Narragansett, along with many Indigenous people living along the New England coast, such as the Mashpee of Aquinnah in Martha’s Vineyard and the Pequots of Connecticut, all have robust wampum traditions. Further inland, members of the Iroquois Nation of upstate New York craft ornate belts depicting stories with the beads.

“The Narragansett were the best,” says Hazard with a smile. “If each of [the Nations] I mentioned didn’t say the same thing, I’d be shocked. But, you’re talking to a Narragansett, so here we go,” he adds with a chuckle. 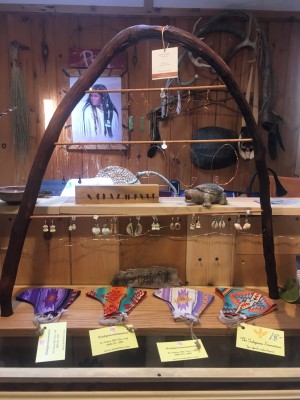 Hazard first learned to make the beads the traditional way. Using a sanding stone, he would smooth the quahog shell and whittle a hole through the middle with a sharp drill bit. Before the Europeans brought steel, the Narragansett would use pointed deer bones to carve out the center of each bead. Today, Hazard uses a tile cutter to shape his beads, a process much less time-consuming than the historic technique.

Wampum has always held an important place in Narragansett culture. Historically and today, the beads serve as tokens of gratitude and respect, but when European settlers arrived, wampum was falsely considered currency.

“It was a gift from the creator and meant to be respected ten-fold. The last name we would give it was money, but that’s what’s in the history books,” says Hazard.

The purple color of the quahog shell develops underneath the shellfish’s first muscle. The deeper the hue, the more valuable. Currently, wampum can only be found naturally. Hazard hopes it stays that way: “There are glass diamonds and recreated pearls. I would not want that to ever happen with wampum.”

Hazard’s focus has always been “all things Native,” an interest he credits to his mother. “I was a big — literally — mama’s boy, ” says Hazard, who is more than six feet tall. “She helped me maintain our tradition.” 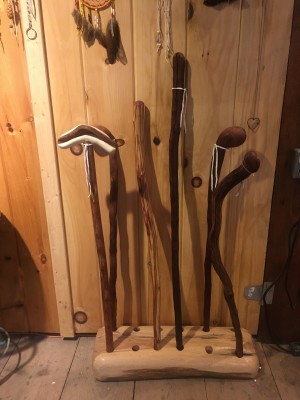 While Hazard is best-known for his wampum jewelry, woodworking was his “first love.” Behind his bead- and shell-strewn work table, he also keeps his latest walking stick projects. He unrolls one wrapped in terry cloth. The red cedar has a pale white film over it from where it was recently sanded. Onto a rag, he dabs a mixture of beeswax and orange oil and polishes the wood. As he does so, the red veins that twist through the white branch deepen to dark purple and the stick develops a shiny veneer.

Not long ago, this stick lay unnoticed deep in the woods of the Charlestown Narragansett Reservation. It was nondescript, gray and covered in lichen and peeling bark. Those with untrained eyes might step over it, but Hazard knew he would find colorful beauty beneath the bark.

After polishing the walking stick, Hazard places it among the others in his store. Each is unique: In some, the natural curve of the wood creates a handle; in others, crushed wampum fills the nicks in the wood, causing the stick to shimmer when it catches the light. To many customers, the walking sticks simply showcase the wonders of nature. But to the Narragansett people, red cedar holds a greater significance.

“The red in the center of the cedar tree is because of the spilled blood of our people,” says Hazard. “For us, it’s very sacred.”

Hazard explains that the red portions of the branch are actually dead wood and the color intensifies with time. The white sections were still alive and grew over the dead red parts before he harvested it. When you visit Hazard’s shop, be sure to inspect his Tree of Life sculpture in the back corner. It’s mounted on a piece of poplar and all red cedar except for one limb of oak. Try to guess which one. 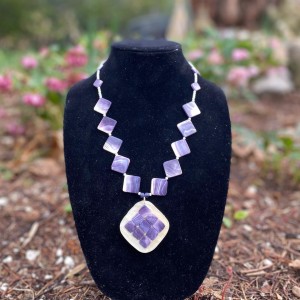 Like his mother and grandmother who passed their knowledge to him, Hazard shares the tradition with a younger generation. He has two apprentices at the Purple Shell learning to make wampum. He also takes his granddaughter to the woods with him, shows her how to find red cedar and teaches her about her people.

Visit Hazard at the Purple Shell at the Fantastic Umbrella Factory, 4820 Old Post Rd., Charlestown, on Thursdays, Fridays, Sundays and Mondays from 1 to 5 p.m., and Saturdays 10:30 a.m. to 5 p.m. For additional information, call 401-364-8088 or visit facebook.com/thepurpleshellgifts.