All Together Now: A Deep Dive Into Four Different Rhody Collections

We talk with four Rhode Islanders about their collections, how they got started and their all-time favorite pieces. 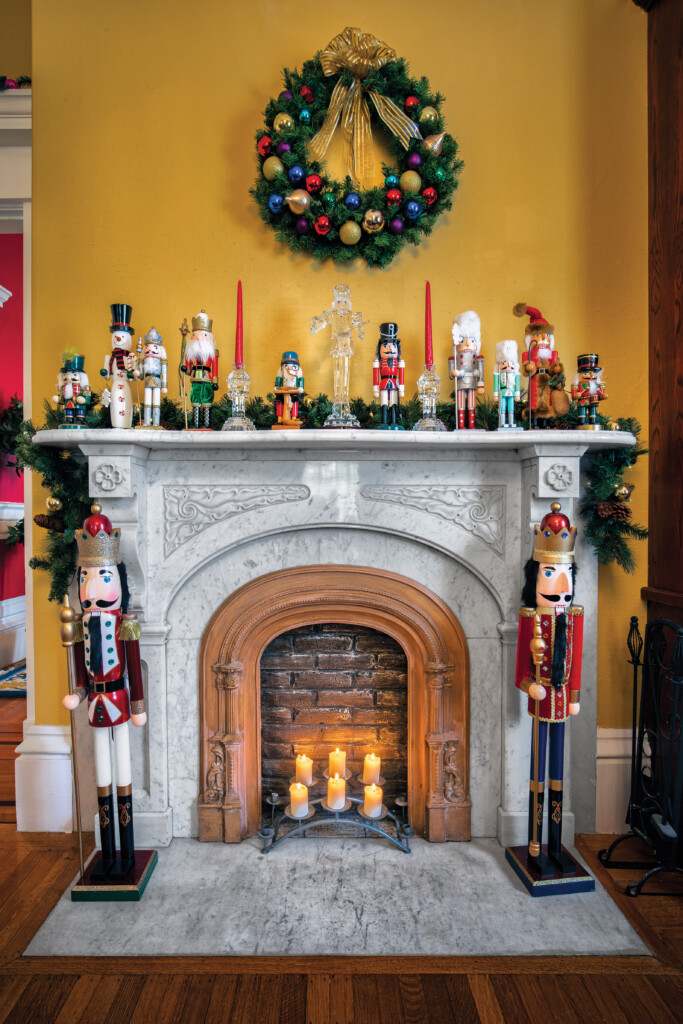 The Woonsocket home of Richard Hallee-Griffin and Larry Griffin. Photography by Wolf Mathewson

As far as he can guess, that’s where his fascination with nutcrackers stems from, and why — along with his husband, Larry Griffin — he decorates their library every Christmas season with his collection of 100 nutcrackers, all in different sizes, shapes and colors.

(They also embellish almost every room in their stately 1846 Woonsocket home — dubbed Griffin Manor — for Christmas, but that, dear readers, is a story for another day.) 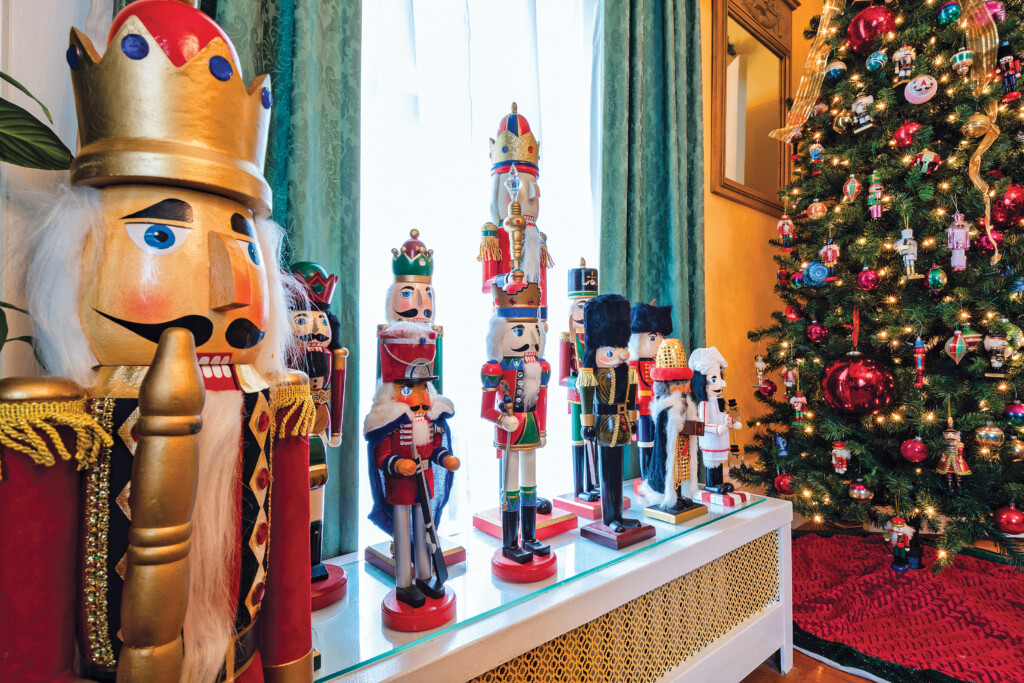 One hundred nutcrackers line the bookshelves, walls and tree of the library. Photography by Wolf Mathewson

How It Started: He bought his first nutcracker in Germany as a seventh grader touring Europe with an All-American band. “It’s looking a little ratty now, but I still put it up,” he says.

How It’s Going: The collection now stands at around 100 pieces, comprised of everything from Bombay Company collectible nutcrackers to a penguin, drag queen, surfer, pirate and even tiny saltshakers. They range in size from 2½ inches high to a 6½-foot life-size model that looks like a terracotta statue standing on a drum.

Biggest Score: A twenty-eight-inch-high light-up crystal nutcracker (new in the box) he found at either Goodwill or the Salvation Army. 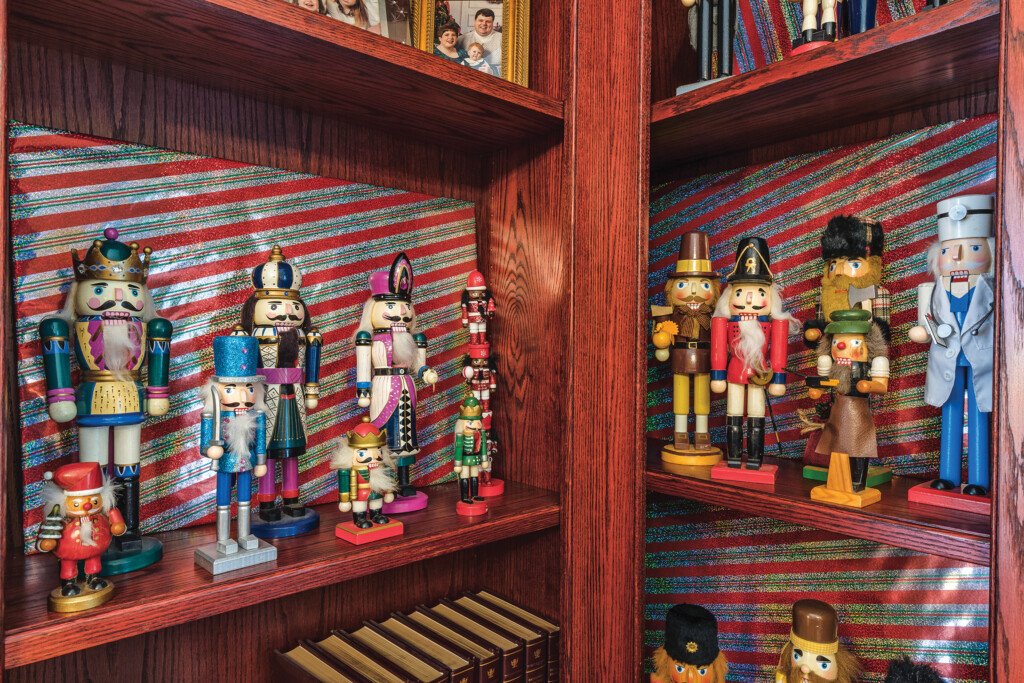 Words of Wisdom: Beware the solid brass nutcracker. “I dropped it on my foot once,” says Hallee-Griffin. “You don’t want to do that.”

Favorite Pieces: He loves the life-size terracotta one, as well as the crystal light-up model. And, of course, his grandfather’s set, which Hallee-Griffin inherited after his passing. But his all-time favorite has to be the sequin zebra-print nutcracker complete with a full fur hat and feather. “It’s really cool and just really different,” he says. “I’m drawn to that one every year.” 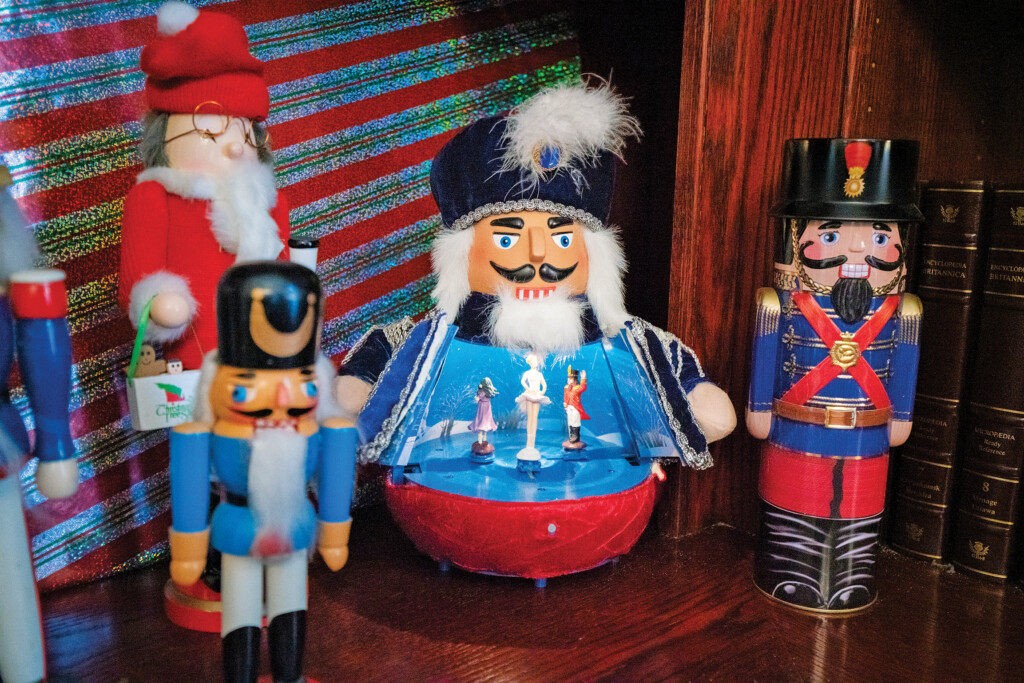 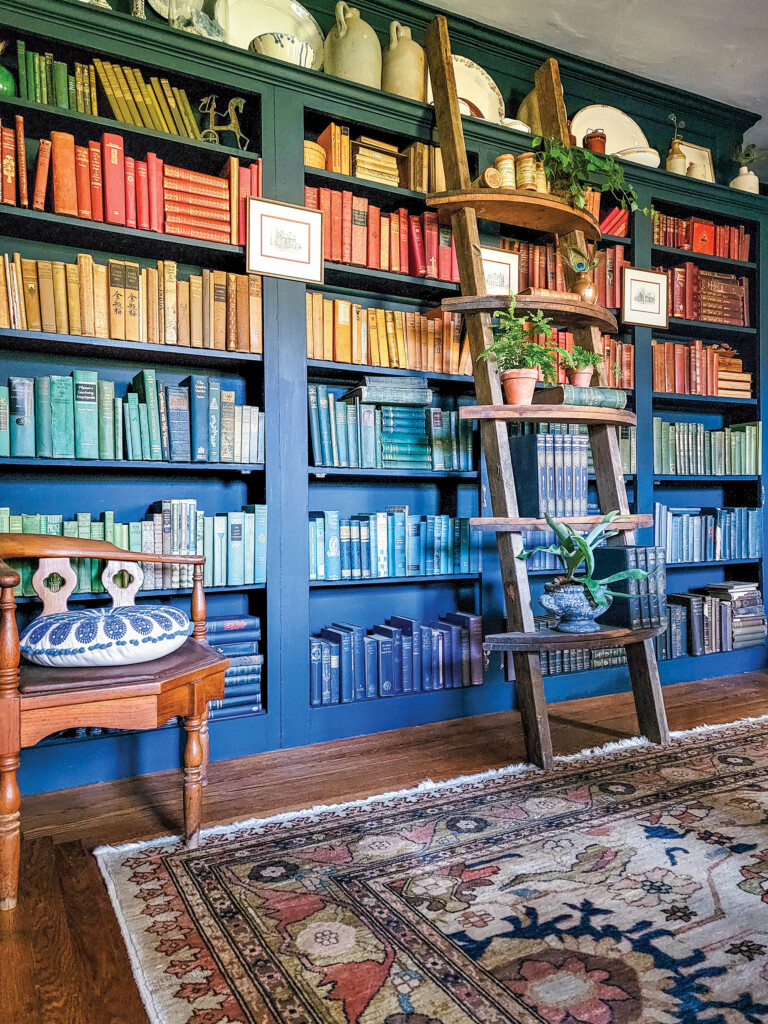 When she was a little girl, Libby Gudz-Reynolds would happily while away a few hours on a Saturday organizing her grandfather’s magazine titles for $2. As she gazed at the bookshelves in his living room, she’d think, “Someday, I want a whole library for myself.”

She’s since realized that dream, turning one room of her North Smithfield home into a color-coordinated riot of antique books, running the gamut from children’s stories and poetry to Rudyard Kipling and fantasy titles, gardening and historic houses to Frank Lloyd Wright and the basic works of Aristotle.

“Colors make me feel good,” she says. “They make you feel a certain way — it’s kind of like an adventure. Sometimes I just come in here and grab whatever looks like fun.” 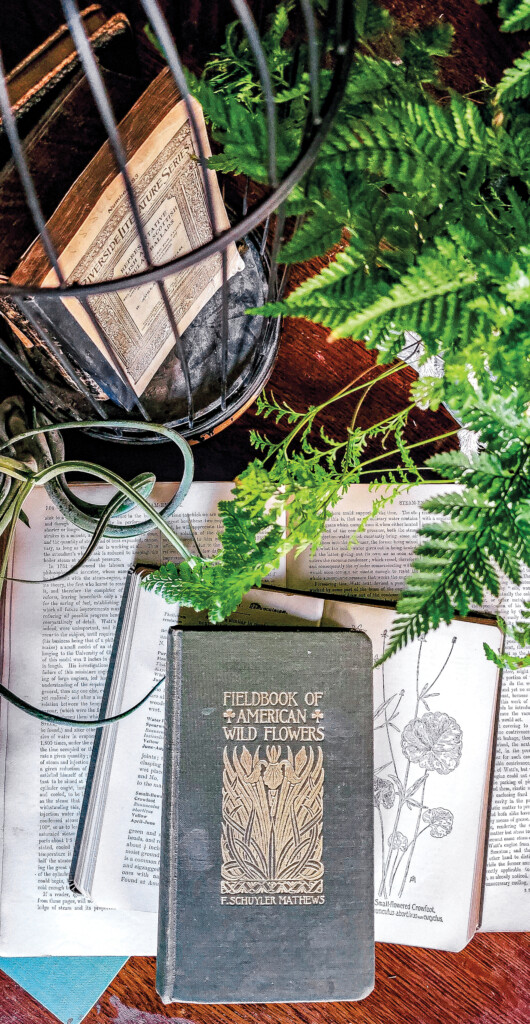 How It Started: Three years ago, her collection had about 100 books.

How It’s Going: It’s grown into “many hundreds, at least,” Gudz-Reynolds estimates.

Poison Pen: She stays away from emerald-green books, since arsenic was used in the nineteenth century to get the bright hue.

Fan Fiction: In high school, she was introduced to the transcendalists, sparking a lifelong love of Ralph Waldo Emerson’s works. She buys just about any Emerson book she finds. She also loves books with weathered, lived-in looks.

“I like when the spines are falling off — they look really spooky,” she says. “When they’re old, weathered, cracked, peeling and falling off.”

Deal Breaker: She mostly stays away from gray, although she does have a few silvery titles, including one about pirates.

Scouting Sites: Most of her books are from Antiques Alley in Greenville, from a seller who has a booth overflowing with volumes. 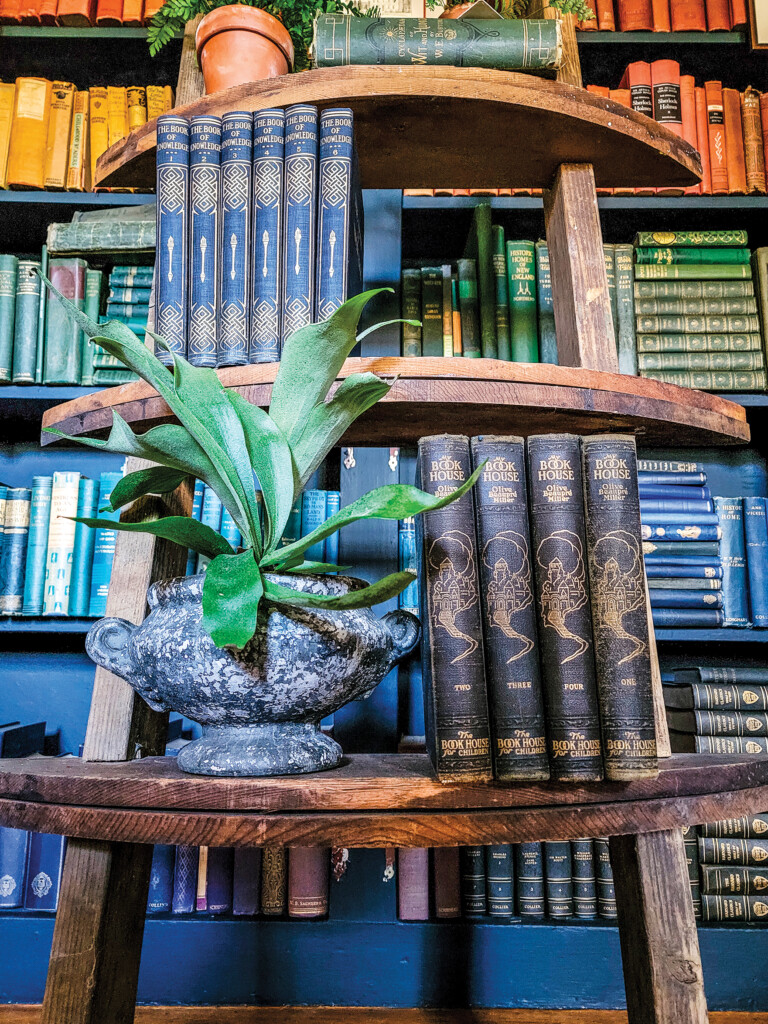 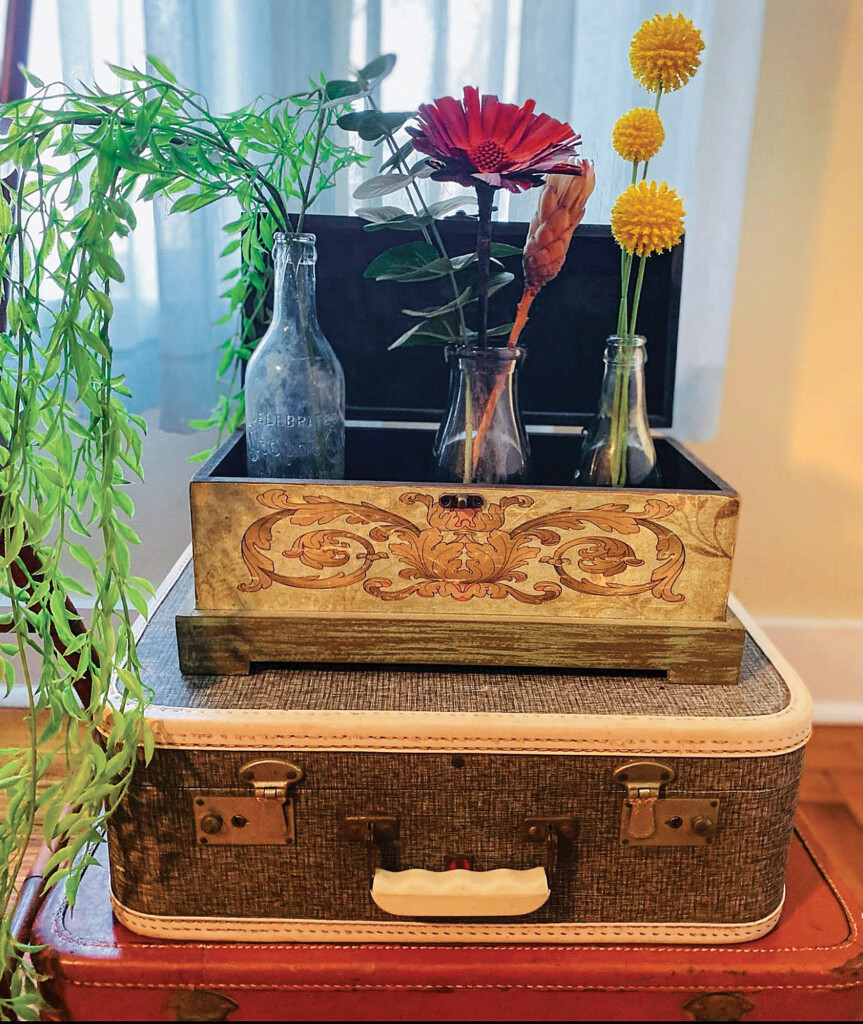 Davis loves to use her found bottles as decor. Photography by Tiffany Davis.

Bottle-digging is a family affair for cousins Tiffany Davis and Crystal Riley-Voigt.

It all started one fall day in 2019, when Riley-Voigt was hiking in a public area and saw something glistening in the dirt. “How horrible,” thought the North Kingstown resident. “Look at all this trash in the woods.” But after a little digging — literally and figuratively — the duo discovered the heap of glass shards was really an old family dump, likely located on an old farm property in the days before municipal trash services. They started digging full force in spring 2020 and turned their trinkets and mutual love of family heirlooms and antiques into a budding small business, Frankie’s Attic, based in their joint booth at Jules Antiques and General Store in Richmond.

How It Started: After finding their proverbial gold mine, Davis and Riley-Voigt quickly educated themselves on bottle-digging etiquette. (The first rule of Bottle-Digging Club is you don’t dig on private property without permission.)

How It’s Going: They’ve pretty much exhausted the first site and have since moved on to new spots. (The second rule of Bottle-Digging Club is you don’t poach sites where someone else is clearly digging.)

Favorite Finds: A Colgate and Company toilet water bottle (with perfume still inside) from the late 1800s/early 1900s is one of Davis’ favorite discoveries. So, too, is the amber Caldwell’s Rum bottle from the 1950s embossed with a ship and rum barrels, and a circa-1920s aqua Turk’s Head Beverages bottle from Providence.

“It’s always fun taking them home and soaking them and getting them clean,” says Davis, who lives in Warwick. “It’s like a surprise.”

Dream Decanter: Davis would love to find a poison bottle. Riley-Voigt has one, a cobalt-blue triangular Triloids poison flask.

When the Charlestown resident isn’t refinishing furniture or finding pieces for Granary Farmhouse Antiques, the business she owns with her husband, Christopher Denneny, she’s hunting for treasures. Her latest fixations include Rumford Baking Powder items and vintage laundry potions to complement her center chimney colonial, a reproduction home she and Christopher bought in 2019 and are renovating to look like an 1800s farmhouse. 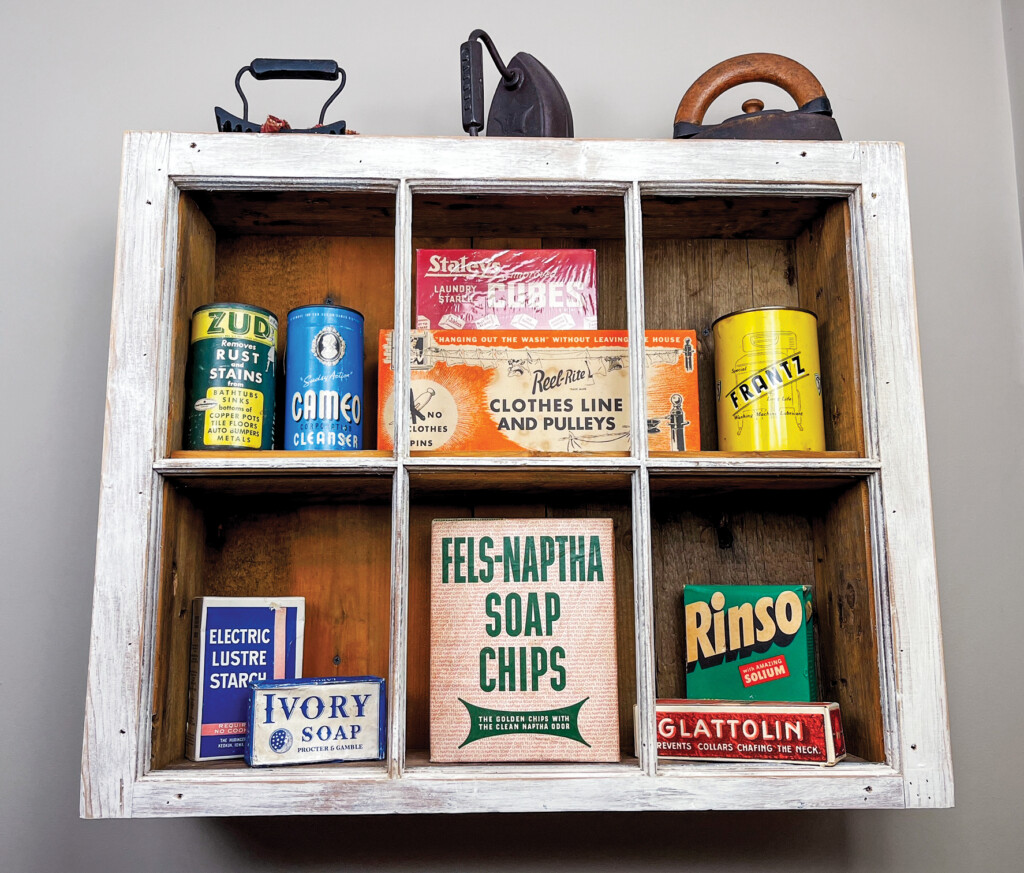 Ferland has about thirty items in her Rumford Baking Powder collection. Photography by Mary Jane Ferland 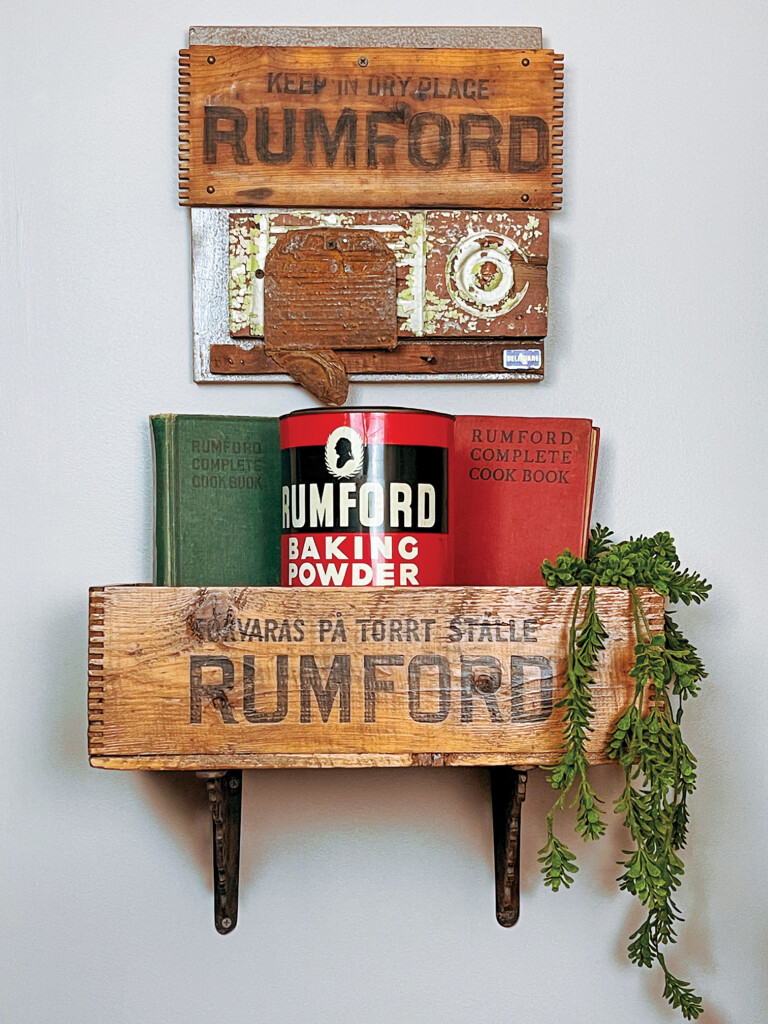 How It Started: She started scouting for Rumford items in 2019. “It kind of went hand in hand with decorating the new house,” she says.

How It’s Going: After scoring one tin at an auction, her collection has grown to about thirty items, including antique Rumford cookbooks, tins, recipe cards and a framed painting by local artist (and good friend) Mike Bryce.

Scouting Sites: She finds many treasures at Jules Antiques and General Store in Richmond, where she has a booth and works a few times a week, and at the Antiques Marketplace in Putnam, Connecticut. Plus, “every time we travel we go to different antique stores in the area,” she says.

Other Collections: She’s starting an Autocrat collection based around her great-grandmother’s coffee grinder. 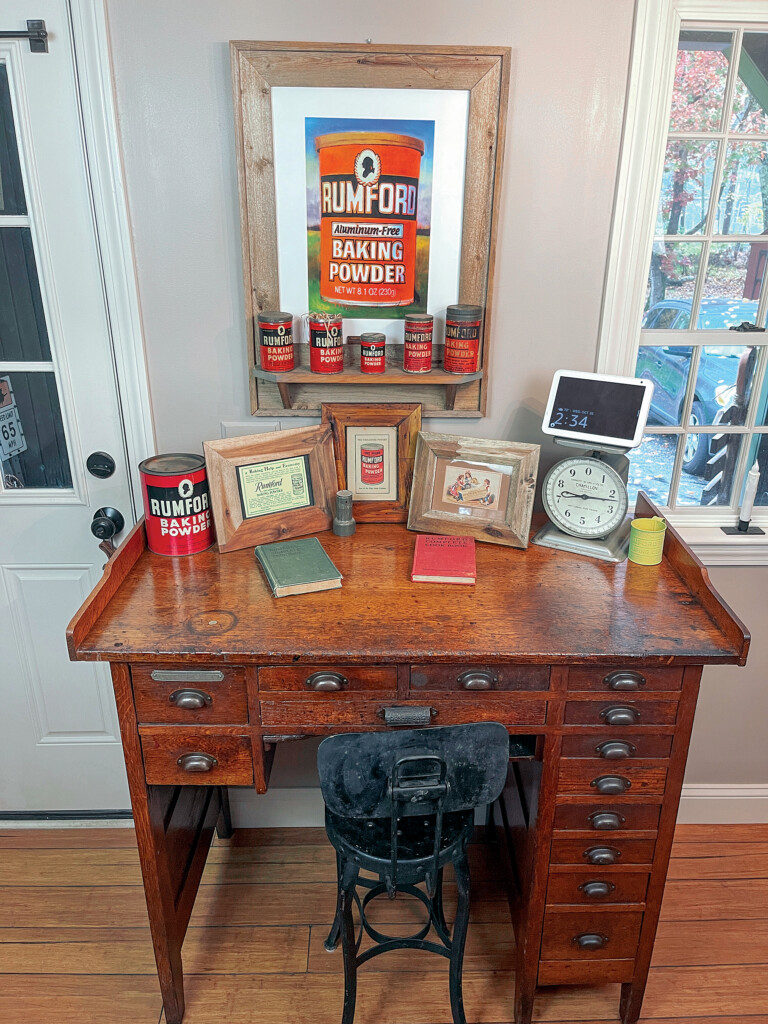