Rhode Island’s Trails are Not So Happy

We've been spending more time outdoors and getting in each other’s space, with heated results.

Standing on her driveway in South Kingstown, Margaret Bucheit points to a stone wall less than 200 feet away that marks the boundary of the Trustom Pond National Wildlife Refuge. Its proximity is worrisome to Bucheit and her neighbors because the refuge will be allowing bowhunting in the adjacent woodlands for the first time beginning next fall, and the prospect makes them feel unsafe.

While she doesn’t object to hunting — her husband, William Ohley, frequently hunts with a long-bow — she has witnessed poachers in clandestine hunting stands and drunk hunters in areas that have been closed to hunting since the refuge was established in 1973.

“Safety is our main concern,” says Bucheit. “If they’re going to do it, do it safely, though we’d prefer that they don’t do it at all. There are so many houses around and so many people looking at wildlife, it’s crazy to think it can be done safely under the current plan.” 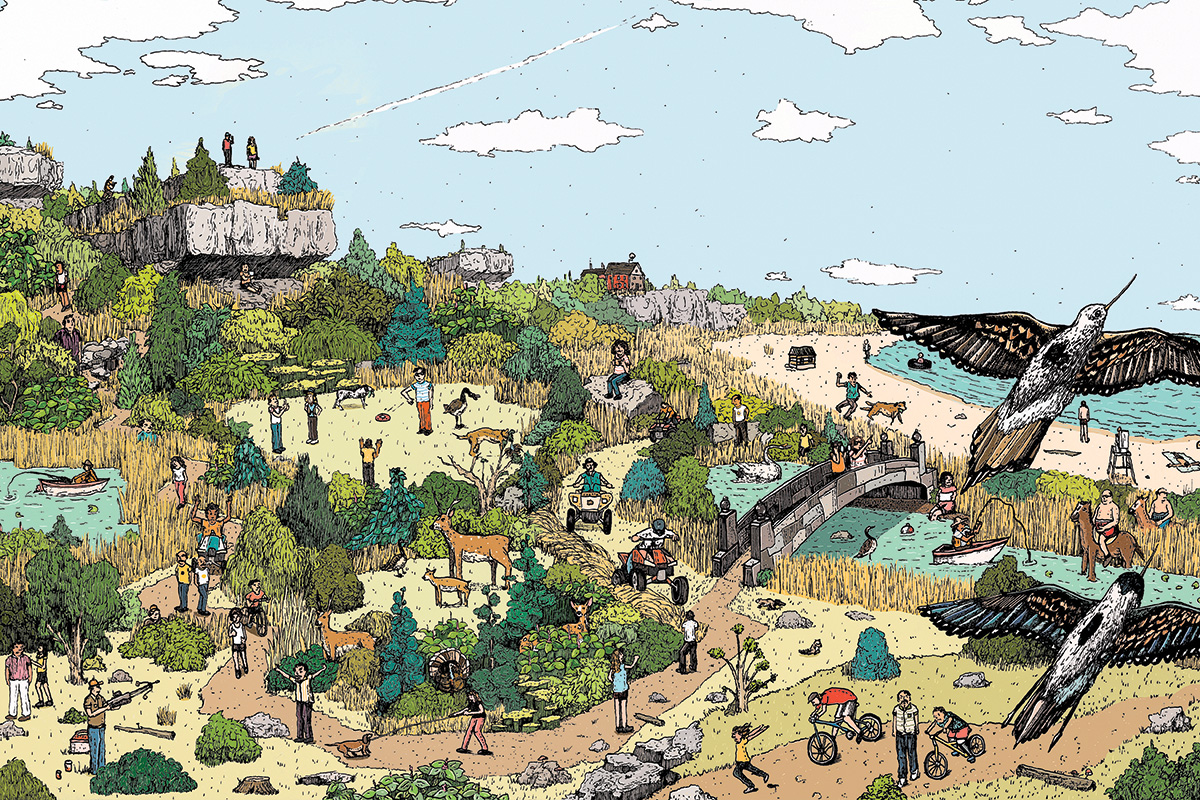 The U.S. Fish and Wildlife Service, which owns and manages the refuge, has established safety zones prohibiting hunting within 200 feet of houses and 100 feet of refuge trails, but Bucheit and Ohley say it isn’t adequate, especially since signs won’t be posted identifying the location of the zones. “That size safety zone would have been fine forty years ago,” says Ohley, “but modern crossbow arrows can travel 450 feet a second. To do it safely, they need a much bigger safety zone.” Equally worrisome, they say, is that there are no safety zones around the neighborhood’s deeded common open space where residents walk regularly.

Bucheit and Ohley have hired a lawyer to represent their neighborhood’s interests in an effort to delay the hunting plan until their concerns are addressed. Neighbors adjacent to the John Chafee National Wildlife Refuge in Narragansett, which was opened to hunting last fall for the first time, have taken similar steps. Hunting has also been expanded at two other national wildlife refuges in the state, and the first “mentored hunt” for youth, disabled veterans and other special populations at Sachuest Point National Wildlife Refuge in Middletown will take place in 2022 or 2023.

The conflict between hunters and walkers has been contentious, with each group wanting access to prime public lands at certain times of the year without having to worry about the other. Yet it’s far from the only conflict among user groups at wildlife refuges, state and municipal parks, wildlife management areas and other properties open to multiple uses.

“But our issue is lethal,” says Buckheit. “It can kill people.”

While that may be true, other user conflicts can generate just as much angst. A conflict last year between a New York City birdwatcher and a woman who let her dog roam unleashed in Central Park led to a racially charged incident that received international news coverage. And Rhode Island’s birders are quick to note this is a common problem in the Ocean State, too.

Birders say their biggest concern about unleashed dogs is for the health and safety of ground-nesting birds that off-leash dogs may trample, frighten and stress.

“The worst-case scenario is direct predation, but the continued stress of reacting to a predator can be a cause of nest failure,” says Dan Berard, a lifelong birder and international bird tour leader who serves as president of the Ocean State Bird Club. “During migration, species that form large flocks tend to be at the same places where dogs will be off-leash, like beaches or fields. These birds are constantly on the lookout for danger from a wide range of predators. Being flushed by a predator is a normal part of life for these birds, but being chased over and over again by several dogs off-leash is not.”

Dogs kept on a leash are much less of a problem, according to Audubon Society of Rhode Island bird expert Laura Carberry, because the leash restricts the amount of area the dog can reach. “Birds and other wildlife can learn to keep away from paths where dogs are kept on a leash,” she says.

Birders note the unleashed dog problem is especially concerning at Moonstone Beach in South Kingstown, the trail to Rome Point in North Kingstown, and Chase Farm Preserve in Lincoln, where online reviews refer to it as “an unofficial dog park.” All three sites display prominent signs indicating that dogs must be kept on a leash.

“The biggest problem is at the mudflats at Charlestown Breachway,” says Jan St. Jean, one of the state’s most active birders. “All the shorebirds come there on migration. Boaters pull up there and let their dogs run, and the birds just keep getting flushed. It puts so much stress on these birds that are trying to put on weight for migration.”

While dog walkers argue that not enough dog parks are available to let their pets run unleashed, none would publicly defend their practice of letting their dogs run freely at parks where it is prohibited.

Unleashed dogs don’t just cause conflicts with birdwatchers, however. They are a top concern for many users.

Charlie Vandemoer, manager of the Rhode Island National Wildlife Refuge Complex, which includes all five federal refuges in the state, says most of the complaints he receives from refuge visitors are about off-leash dogs. “I spoke to an elderly couple walking on a trail at Ninigret a while back, and I was admiring their walking sticks,” he says. “They said the reason they have them is to keep dogs away.”

As for hunting at the refuges, Vandemoer says it’s not high on his list of refuge user conflicts, even though he received roughly 1,600 comments about the expanded hunting plan and more than 1,400 opposed it. “As we implement a new plan for a new hunting area, maybe something will pop up, but that’s all,” he says. “We have a pretty good experience base of how hunting occurs and how safe or unsafe it is, and that builds our confidence. But it doesn’t do anything for a neighbor who isn’t familiar with it. There’s a learning curve, and individuals just have to accept — or not accept — that it is indeed safe.”
He says refuge staff are trying to learn as much as they can during the first year of the new hunting plan, with the aim of identifying any issues that may need to be addressed in future years. 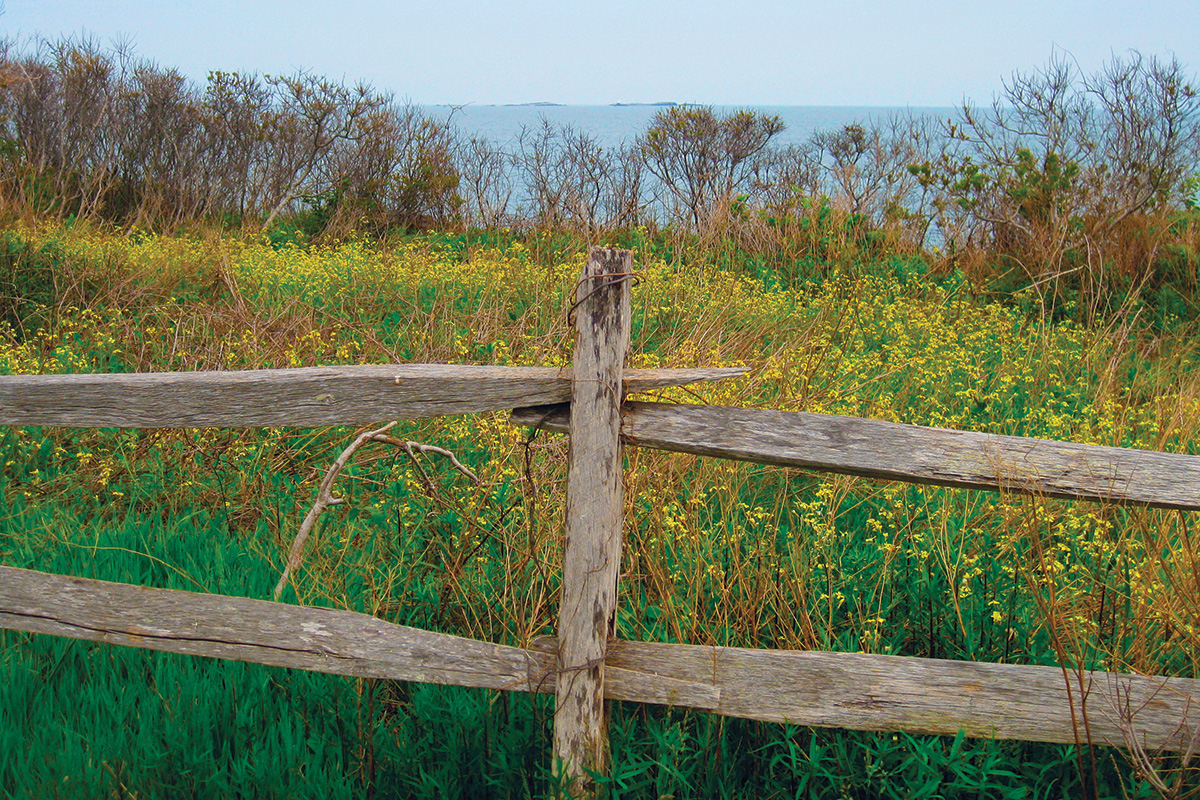 Dylan Ferreira, the Rhode Island Department of Environmental Management wildlife biologist who monitors deer and deer hunting on public and private property around the state, agrees that there is little direct conflict between hunters and non-hunters, despite concerns among users. “I would say most concerns come from hunters that non-hunters are not wearing the appropriate fluorescent orange during hunting season,” he says. “Some hunters even bring extra orange with them to give to people not wearing orange.”

Representatives of all user groups agree that the underlying problem leading to most user conflicts is the density of the state’s population and the dearth of public lands available to meet the needs of all users.

“We’ve been managing for multiple uses for decades, so most people who use the state management areas have been groomed to understand that,” says Catherine Sparks, who was assistant director for natural resources at DEM until retiring in November. “It’s not like there’s any declared animosity between groups, just that occasionally individuals rub each other the wrong way. Our conflicts are more about the numbers of people who want to use the areas.
“You’ve got cross-country teams that want to run, horseback riders, mountain bikers that want to hold events,” she adds. “Trying to cope in such a small and densely populated state with the multitude of demands, and balancing and having some fairness so we can in some way accommodate as many types of uses as possible, is challenging as a manager. When you have a lot of people, you’re going to have issues.”