Rhode Island’s Trails are Not So Happy

We've been spending more time outdoors and getting in each other’s space, with heated results. 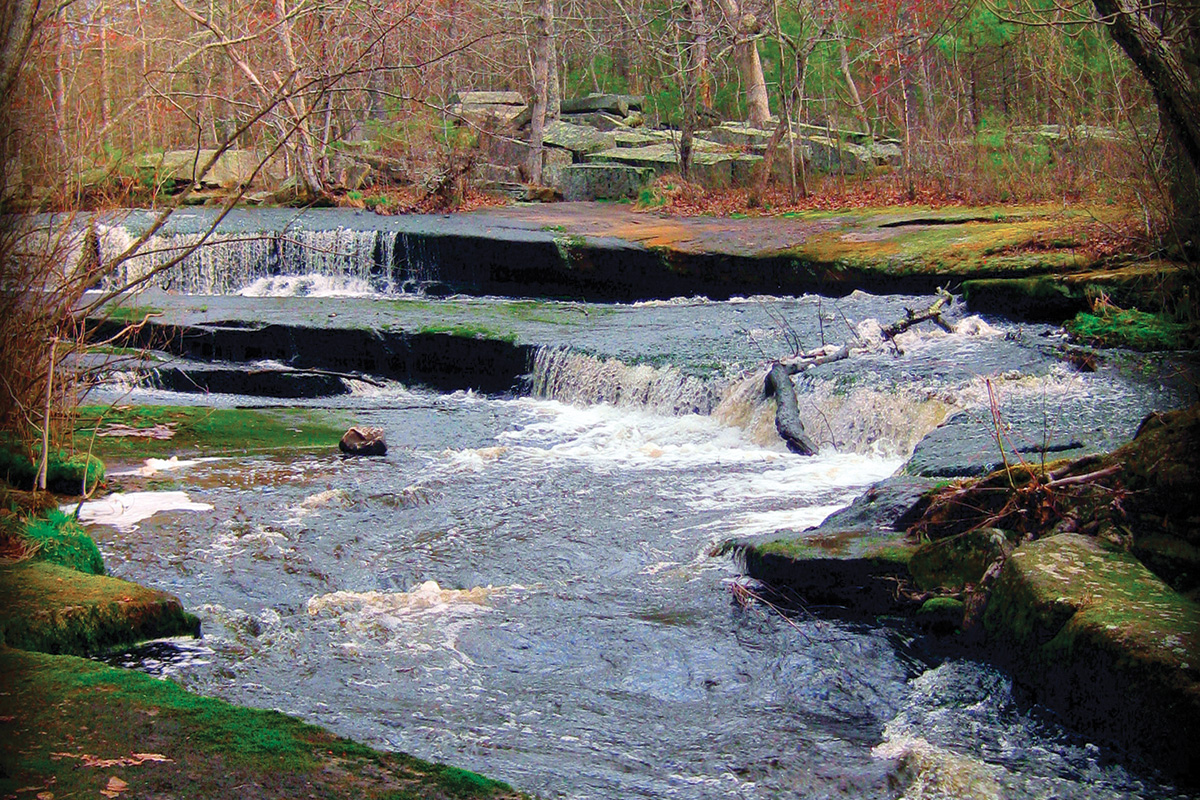 Stepstone Falls in Escoheag (opposite page) is one of the most scenic spots in Rhode Island for hikers. Photography courtesy of Ernie German/TrailsandwalksRI.wordpress.com

Most of the user complaints to DEM about state lands are about the property’s deteriorating condition and about littering or illegal dumping of trash and construction debris, not about conflicts with other users. But conflicts occur, nonetheless.

“We work hard to keep our Class A trout fishing streams as clean as possible, for instance, and we try to keep horses out of the rivers because they muck it up and disturb the bottom,” Sparks says. “But you’ve got some users — always just a few — who like to imagine they’re in Wyoming or some great big place and they want to walk their horse down the middle of the river. That’s not only a user conflict but also an impact to our natural resources.”

The biggest issue in recent years, according to Sparks, is the growing popularity of mountain biking. Their speed conflicts with hikers and others seeking to enjoy the tranquility of nature. Mountain bikers are an even greater concern to horseback riders, because the bikes can spook their horses, which may turn quickly, rear up or race away, possibly injuring themselves or the rider. It’s a problem that mountain bikers say they are generally aware of, but not all cyclists exhibit the proper trail etiquette necessary for a safe interaction.

“If we’re going downhill and approaching them at speed and don’t know they’re there, then I can see them being startled, but those are kind of isolated instances,” says Alan Winsor, the leader of the Rhode Island chapter of the New England Mountain Bike Association. “For the most part, what I’ve witnessed is that mountain bikers recognize that horses have the right of way, and we’ll stop and pull over and be courteous. The cases of conflict are when we startle each other and start off on the wrong foot.”

A computer programmer from West Greenwich and a mountain biker for a dozen years, Winsor says he would welcome a chance to chat with representatives of Rhode Island’s horse-riding community, “because if their perspective is that mountain bikers are a bunch of reckless assholes, then I’d want to know that and try to address it.”

The most popular destinations in Rhode Island for mountain bikers are the Big River and Arcadia management areas, as well as Lincoln Woods and Diamond Hill state parks, all of which are also popular among hikers, walkers and horseback riders.

Perhaps the greatest user conflicts arise from the illegal use of off-road vehicles on public properties, which most users agree are noisy and do considerable damage to the lands they traverse. Every user group complains about all-terrain vehicles, dirt bikes and other two- and four-wheeled motorized vehicles, none of which are allowed on any federal, state or municipal lands in Rhode Island. And that’s part of the problem. Riders have nowhere to ride legally in the state, so they ride illegally almost everywhere.

About fifteen years ago, DEM collaborated with the Rhody Rovers, who identify themselves as “the premier club for off-road riding in Rhode Island,” to find a site where trails could be developed specifically for off-road vehicle users. After a year of searching, they identified a section of Snake Den State Park in Johnston as a satisfactory solution, but when local politicians and neighbors heard about the plan, they quashed it.

“We get it. Nobody wants to be bothered,” says Alex Castosa, secretary of the Rhody Rovers and a member of the Rhode Island Trails Advisory Committee, who has been riding off-road motorcycles for forty-one years, mostly out-of-state. “We understand that there isn’t much land in Rhode Island, and the land we do have we take pride in taking care of.”

Founded in 1947 by Ralph Razee, the Rovers apply for special-use permits to ride legally up to six days each year at Arcadia and Big River for competitive and recreational events. According to Castosa, they spend a great deal of time maintaining the trails they use and cleaning up after their events, and they even helped DEM construct a thirty-foot bridge across a stream in Big River last summer.

“We get along great with other groups, or we think we do,” he says. “I know birders and hikers and bicyclists don’t really like us too much, but when we’re in the woods on state property, we’re in there with a permit.”

He admits, however, that most off-road enthusiasts frequently ride illegally in the state.

“In our world, there are so many people breaking the law that it’s hard to identify those of us doing it right,” says Castosa, an eight-year Marine Corps veteran from Johnston who works for the city of Cranston. “There are a lot of local guys that ride in the woods illegally, and that’s never going to stop. You’re never going to stop a fifteen-year-old with a new bike from riding on the public land behind his house.

“If there was a legitimate place to ride, even if it was temporary or seasonal, I do believe it would help, though,” he adds. “It’s not going to fix the problem entirely. It would probably take a long time for the mindset to change, for parents to say ‘you can’t ride back there, but I’ll take you to this place that’s legal.’ ”
The challenge facing Sparks and others responsible for managing public lands is accommodating the variety of legitimate users whose activities aren’t necessarily compatible with each other. Land managers spend considerable time responding to complaints, meeting with individuals and sometimes bringing groups together to discuss their issues.

Sparks wonders whether some trails should be designated specifically for mountain bikers and some for horses, for instance, to reduce the potential for conflict. “We haven’t gotten to that level of sophistication in our management to develop that structure and getting the public to buy in, but I suspect that as time goes on, there will be some opportunities to weigh in on that strategy so we can provide a higher quality recreational experience for all users.

“Our challenge is getting significant traction on some of these things because of the resources it takes to sit down and do the mapping and conduct the analysis,” Sparks adds. “I foresee that these things will happen eventually because I believe they have to happen. But there has to be public input, all of which takes time to get it right.”

Before retiring, Sparks initiated internal discussions at DEM around whether to prioritize uses at particular properties. The unprecedented level of use of state properties during the coronavirus pandemic led her to conduct what she called an “after-action review” of public access areas to address impacts on the resources and conflicts among users. The limited availability of parking was a significant problem at many locations, she says, which inevitably led to additional conflicts.

“Our mission is to make sure public lands are available to everybody,” Sparks says. “In many cases, that includes people from out-of-state. That’s another user conflict: in-state versus out-of-state. ‘All these cars from out-of-state are here and I can’t find a place to park.’ ”

With the exception of opening day of fishing season, parking isn’t usually an issue at most of the state’s freshwater ponds and streams during a typical year, but that doesn’t mean there aren’t conflicts among anglers. In recent years, a public battle has emerged between fishermen who catch stocked trout and those who prefer to fish for native trout.

“Most fishermen don’t fish a lot — they go out on opening day to catch stocked trout, and they consider it a day to get together with their friends,” says Jim Turek, a trout fisherman from Richmond and a restoration ecologist for the National Marine Fisheries Service. “They’re not focused on the resource. I’m not sure they even care whether they catch trout or something else.”

But there are a small number of fishermen who do care. They aren’t interested in catching hatchery-raised, non-native brown or rainbow trout stocked by DEM. Their holy grail is catching native brook trout, even though the fish seldom grow more than eight inches long. “It’s the heritage value of the fish that they’re interested in,” Turek says.

The crux of the issue, he adds, is that very few streams in Rhode Island are left where native trout can be found, and when larger hatchery-grown trout are stocked in these streams, the non-native fish outcompete the native ones, displacing them to lesser-quality habitats.

Native trout fishermen formed an organization, Protect Rhode Island Brook Trout, to encourage DEM to stop stocking trout in pristine sections of the Wood River, Falls River, Beaver River and a few others to protect native trout populations. According to Turek, who says he’s on the sidelines of the debate, DEM responded by increasing the minimum size fish that trout fishermen can keep to eight inches, improving the likelihood that any native trout captured would be released. It was a useful first step, but it didn’t resolve the issue. In fact, it has become even more complex because the native trout fishermen have split into two camps — bait fishermen and fly fishermen — over whose gear causes the least harm to the fish.

A resolution to the fishermen’s conflicts — or those of most of the other user groups — does not seem imminent. In many cases, part of the answer lies first in greater tolerance and better trail etiquette among all users of public lands.

“The beauty of Rhode Island is its public support for open spaces,” says Vandemoer. “We’ve got a whole network of lands where people can bring their dogs, play soccer and do all sorts of other things, and part of our job is to try to get the word out about where they can go to do whatever they choose to do. There are places for just about everybody.”