Not Back to School: An Explainer on Rhode Island’s Teacher Shortage

As kids flood into Rhode Island classrooms this fall, one school essential is proving especially hard to find: teachers. 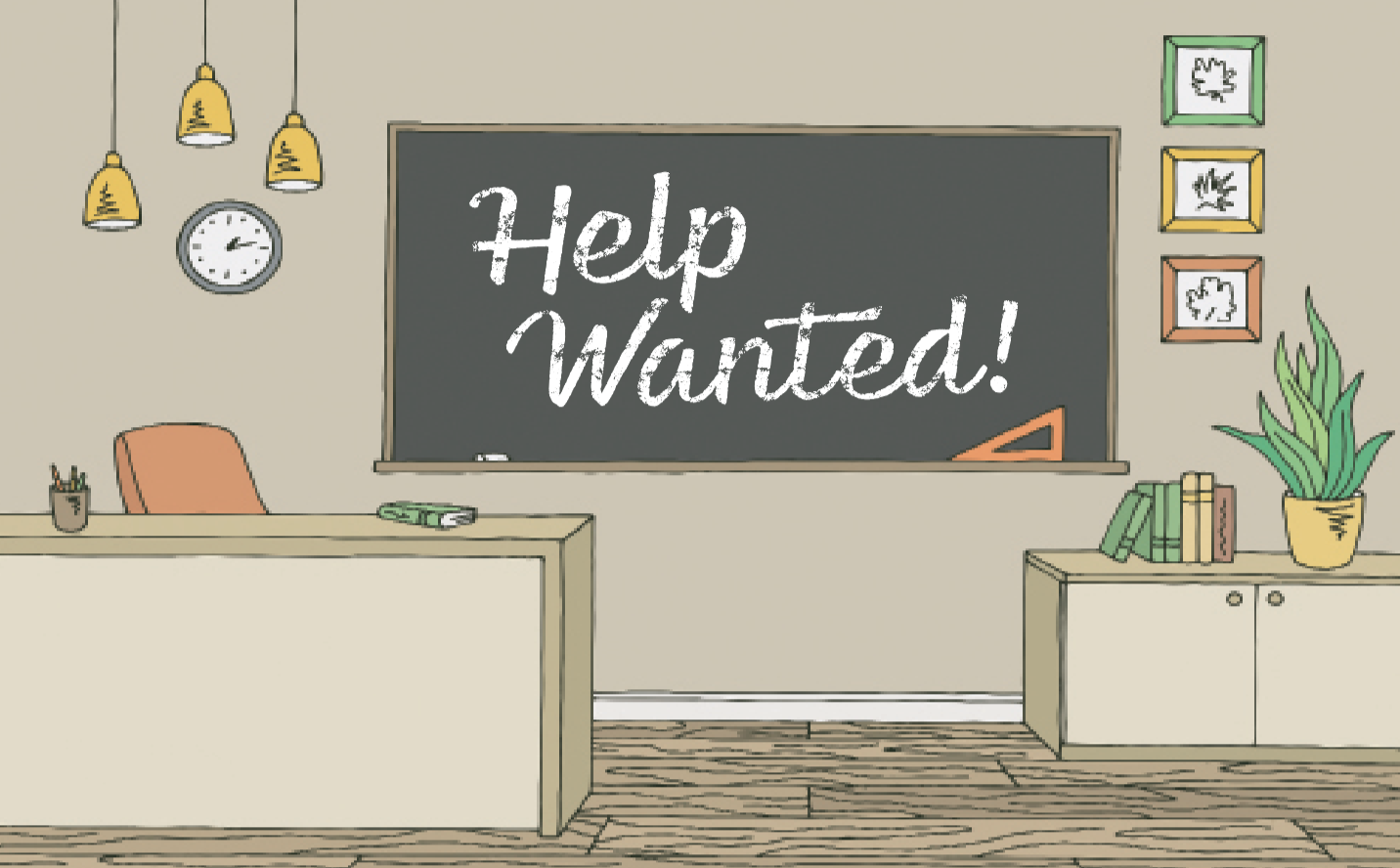 Kyra Shindler can’t recall why she picked glow sticks for her eighth-grade English research project. She doesn’t remember how she related them to a book she and her fellow classmates read that year, or the book itself, or if she ever presented her findings to the class. But she’ll never forget the intoxication of academic freedom to write as she pleased.

That’s when Kyra Shindler decided: She would be a teacher.

“To study what I wanted — it was very cool. This amazing teacher opened my eyes to the different ways you could teach English, and what drew me in was the versatility of the career,” she says. “That desire never wavered. It only got stronger. As I got older and entered high school, I had other English teachers who showed me even more ways to be creative. And when I have my own classroom, I can make it my own.”

In mid-June, Shindler, freshly graduated from the University of Rhode Island, was looking for her own classroom. And across Rhode Island — and the United States — classrooms are looking for teachers. According to the National Center for Education Statistics, each year, on average, 8 percent of teachers leave the profession early; another 8 percent leave their schools for a different one. At high-need schools, with large numbers of low-income students or speakers of a language other than English, the turnover rate can be as high as 30 percent.

The shortages also vary by geography and subject matter. In Rhode Island, the need for elementary school teachers with a certification in English as a second language, and secondary math, science, world language and special education teachers, is acute. In a state where more than 16 percent of the population is Hispanic, Spanish teachers are hard to come by.

“We’ve had an ongoing shortage for years in the science specialties — chemistry and physics, and, to a certain extent, math and secondary-level special education teachers,” says Tom DiPaola, executive director of the Rhode Island School Superintendents Association. “Those have been chronic. But COVID exacerbated the broader problem. We started to have shortages due to people concerned about their health, and there was a pattern of people retiring early, and those older people didn’t want to put their health at risk by being substitutes.”

Subbing was once a rite of passage for the aspiring full-time teacher. Now, says Cranston Superintendent Jeannine Nota-Masse, a promising student teacher might get an offer right away.

“There are no subs,” she says. “To find the pool of people to fill in on the day-to-day — we don’t have that anymore.”

Neither the state nor the federal government compile annual statistics on the rate of attrition in teaching. But a good proxy is the Rhode Island Department of Education’s annual three-year look at the number of preliminary emergency certificates it issues. RIDE grants these one-year certifications at the request of a school district that can’t find a certified and qualified candidate to fill a vacancy. From the 2018-2019 to the 2020-2021 school years, the number of emergency certificates rose by nearly 40 percent.

Upstream, enrollment in teacher preparation programs has declined steeply. According to a March report by the American Association of Colleges for Teacher Education, after a high of 200,000 education degrees conferred in the 1970s, 90,000 were awarded in the 2018-2019 school year. URI’s Interim Director of the School of Education Diane Kern says its enrollment has actually increased with the introduction of programs that offer a dual elementary and special education certification, and one for teaching multilingual learners.

“There is still great interest here in becoming a teacher,” she says.

But Rhode Island College’s Feinstein School of Education and Human Development, which turns out 180 graduates a year, has seen a decline on par with the national trends. Dean Jeannine Dingus-Eason points to the low numbers of SAT test-takers in the state who say they want to become teachers — an average of 450 out of approximately 7,800.

Educators say sociological and economic trends are draining the talent pool. Women, who make up about three-quarters of the total teacher population, have many more career opportunities than generations past. For graduates of the hard sciences, teacher pay pales compared to the scales of private sector jobs, and for younger workers, the promise of a pension after forty years of service is not a strong enticement. Some districts are hampered by a lack of affordable housing.

The culture wars have long had a theater of operations in the classroom. Nearly a century ago, the teaching of human evolution led to the arrest and conviction of Tennessee high school teacher John T. Scopes. Today, teachers have become the targets of a loud minority clamoring to arm them while fighting against everything from public health measures to bathroom accommodations for transgender students to teaching accurate history.

“There’s a huge issue (with) the prestige of the profession. It seems like every week there is a new study about the burnout from COVID and shutdowns and the external pressures facing teachers,” says Eric Duncan, a senior policy analyst for the Education Trust, who authored a brief on teacher shortages. “It’s contributing to the work shortage, and it’s a particular strain on educators of color, who are reporting higher rates of burnout. It’s a constant battering. Right now, it feels like there’s an urgency to reshape the teaching profession, and schools are seizing the moment.”

In the short term, districts like Providence are recruiting teachers much earlier than in years past and using money from the Elementary and Secondary School Emergency Relief Fund — federal money to mitigate COVID’s impact on schools — for referral and hiring bonuses. Depending on an applicant’s certification, years of experience and out-of-state status, a new hire could get up to $10,000 for coming aboard. That bump enticed secondary special education teacher Nikos Giannopoulos to leave Beacon Charter Schools in Woonsocket after twelve years to take a job at William B. Cooley High School in Providence.

“I don’t take leaving lightly,” he says. “But it’s not often in the teaching profession where you see a hiring bonus. And it’s the most appreciated in my job I’ve ever felt. It made me feel in demand and as if I would make a difference — which is very important to me.”

With 120 teacher vacancies in July, Gina D’Addario, Providence Public School District’s senior director of human resources, says “to keep up with the Joneses we have to be creative and set ourselves apart from other districts with a very competitive package. Without these incentives, we would be in a very tough spot. They are necessary to survive in the environment we are in right now.”

“That enabled us to have some consistency for the kids,” says Superintendent Peter Cummings. “They were in the building, they knew the kids, the routines and the rules.”

Other recruitment tools include the Council on Elementary and Secondary Education’s decision to update the teacher certification regulations by expanding full reciprocity to teachers from Connecticut and Massachusetts and giving teachers with relevant career expertise in shortage areas seven years to earn a certification.

“I was watching the students in the classroom — all so engaged and so excited to be learning. There was just such good energy in the room, and that’s when it clicked.”

Potkul is entering URI this fall as an education major.

Colleen Callahan, of the Rhode Island Federation of Teachers and Health Professionals, and a member of the state Board of Education, says the money is also important as a retention tool. New teachers are more likely to be saddled with a debt that strains against the limits of their salaries. The Rhode Island Foundation recently raised $3.1 million to offer loan forgiveness of up to $25,000 over the first three years to twenty-five teachers of color in the Providence public schools. Callahan says funds should be allocated to compensate experienced teachers for mentoring new hires.

“New teachers want two things: orientation guidance — how does the system work — and two, structured mentoring from a veteran, and there should be opportunities to network with other teachers.”

Shindler well understands the challenges ahead, but they can’t quite dim the stars in her eyes. “I just want to hit the ground running. I’ve waited for so long now. I’m finally here and I can’t wait to get started.