This Newport newcomer has a friendly bistro vibe and an updated Italian menu that's deeply satisfying.

Bar ’Cino is reminiscent of a lot of things, but being part of a restaurant conglomerate isn’t one of them. Newport Restaurant Group owns a dozen places across the state and almost all of them — the Boat House, Castle Hill, the Mooring — carry an element of grandeur. Sometimes it’s the water view, sometimes the size of the dining room, but every space conveys financial backing that exceeds one person’s checkbook and creates a uniformly reliable identity. However, Bar ’Cino, the company’s latest restaurant, has a smaller footprint, fewer tables, no view to speak of — and it’s better because of it. 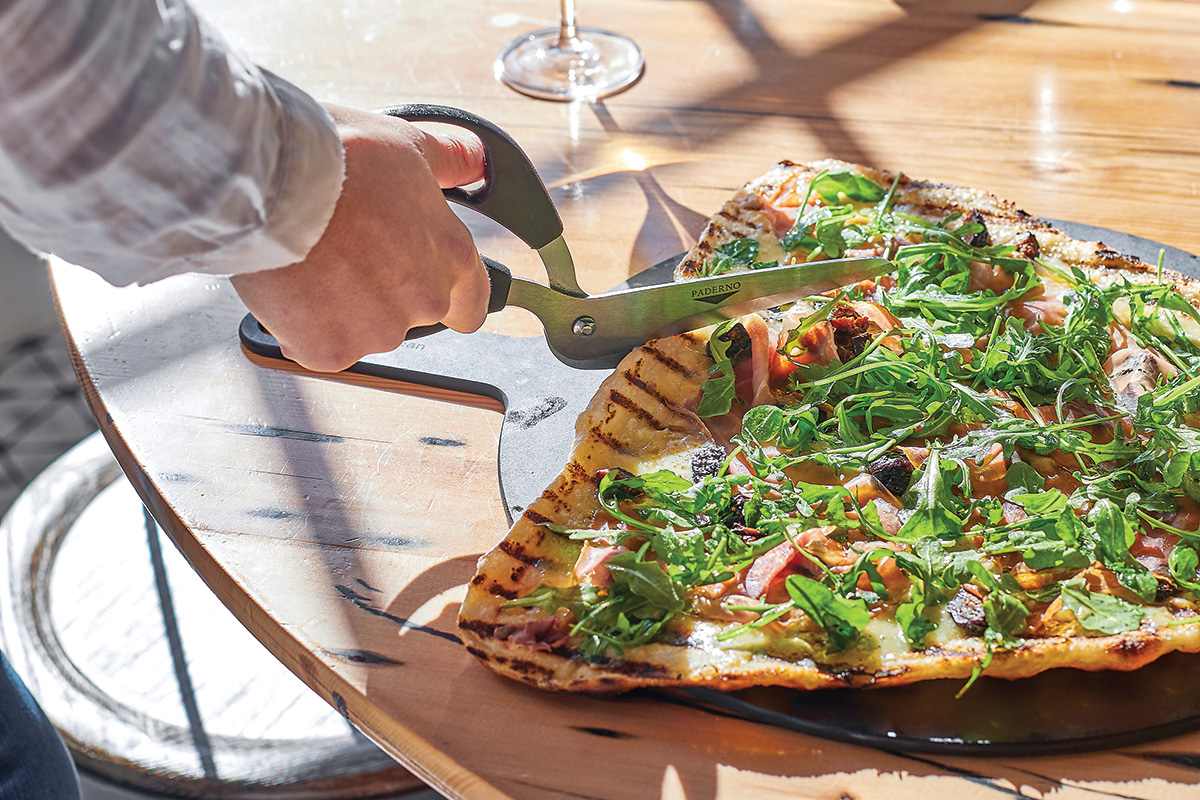 Diners cut their pizza with shears. Photography by Angel Tucker.

On the corner of Washington Square and Charles Street, Bar ’Cino has a single large window overlooking the square but the bulk of the restaurant runs railroad-style, straight back in single file. Tight banquette tables run parallel to the stooled bar, each side holding about thirty diners. Reservations are saved for parties of six or more but what could be a messy mass of impatient locals gathering by the front door collects in easy, authentic revelry. Some people stand with a drink in hand, many meander down the single lane of traffic to greet old friends, doe-eyed babies and colleagues who grabbed available seats first. It all feels very small town, simple and sincere and as far from a corporation as you can get.

It’s not a big space but it’s an inviting one, reminiscent of a New York bistro with eight feet of storefront and eighteen hundred feet of life within. The kitchen works openly, directly alongside the bar where the younger half of the dining room perches on stools and rests their feet on iron piping. If the other half — sitting along the wall — seems slightly older, that’s just the juxtaposition that Bar ’Cino thrives on. Vineyard Vines wind comfortably next to trucker hats in a room that’s as bucolic as it is industrial. Tables alternate between rustic wood and Italian tile and everything on the menu elicits a double take of pleasant surprise. 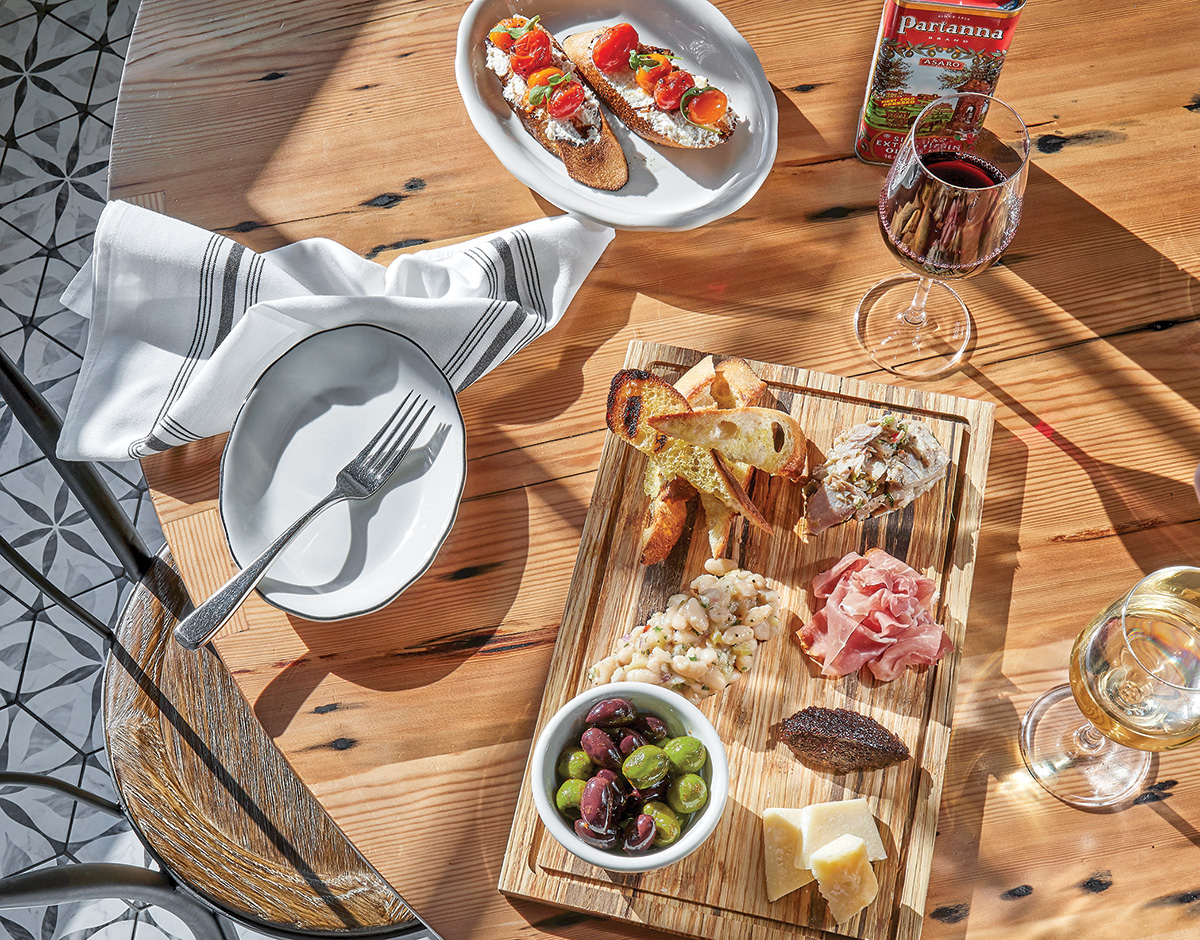 The antipasti plate with bruschetta. Photography by Angel Tucker.

Wine is the mainstay but Bar ’Cino mixes up a quirky cocktail that speaks to its sense of humor. A chocolate margarita sounds like a bad dare but what smells sweet tastes tart and spicy. Like a lot of the cocktails, it lives somewhere between modern American and Fellini’s Italy, dramatic and enigmatic but ultimately lighthearted as it goes down. This dichotomy is an approach that the restaurant is keen on: minimalist line drawings of curious characters dot the walls while old school tins of Partanna olive oil grace each table. It’s an aesthetic that straddles the last seventy years, appreciating the Italy of old but updating memories as they spring to mind.

Nothing manifests the parallel more than the grilled pizza. To say it’s thin is a vast understatement; surely someone is running it through a pasta maker to tame the unruly gluten. It’s served whole with shears, which is entertaining if you’re actually willing to share. (Advice: don’t.) In a state that made a name for itself on grilled pizza, it’s easy to be derivative but this papyrus-thin version is particularly noteworthy. The kitchen does stick to a handful of traditional ingredients for appetizers — ribbons of prosciutto, stewed white beans, oil-poached tuna — though the American bar crowd does chant softly in the background as a plate of parmesan-dusted potato chips parades out with a sidecar of aioli. (“Mine,” says
a hovering man on what is clearly his last date.) 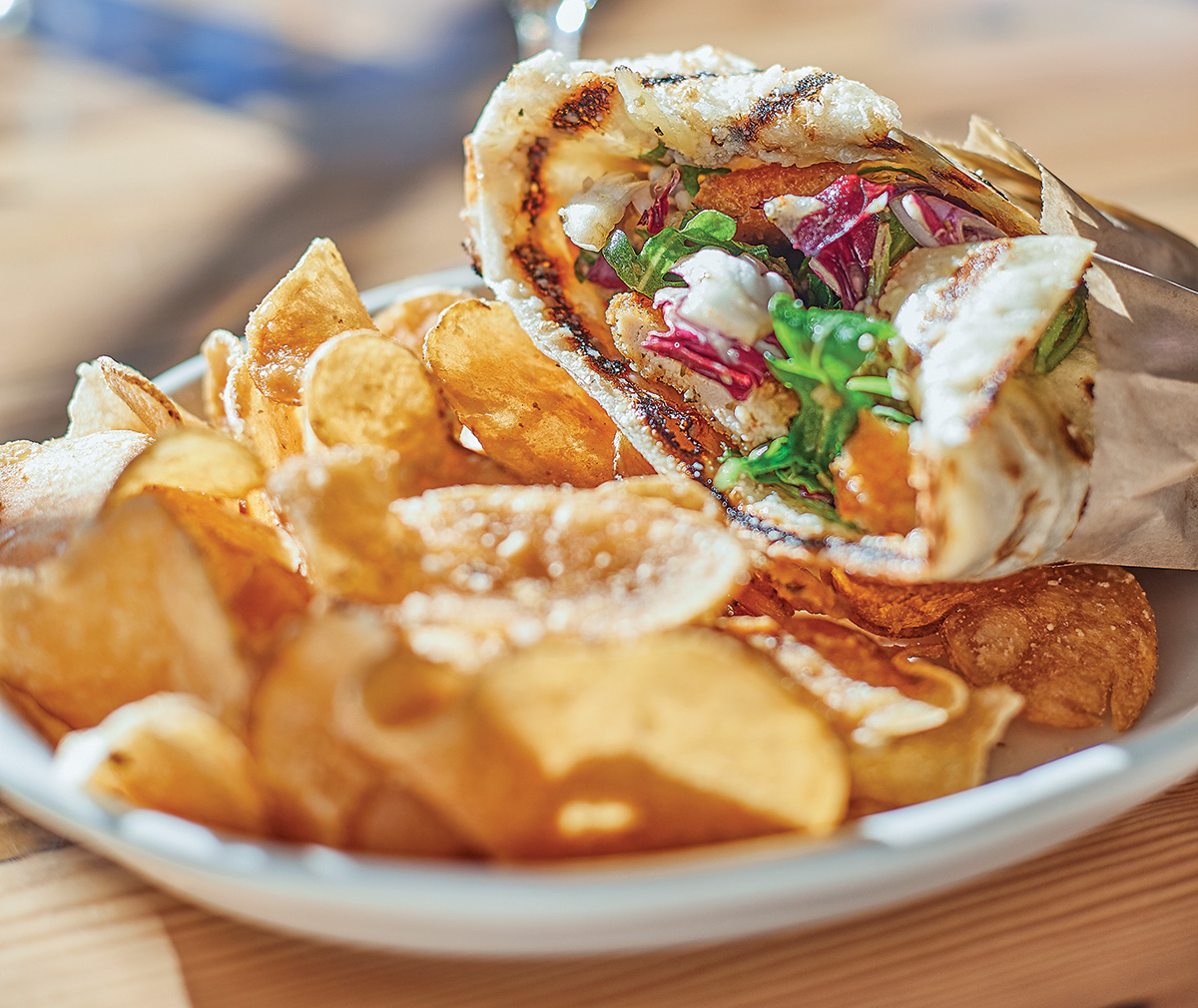 And while other restaurants might throw a communal table into the mix to force camaraderie, this one does so despite most people dining in duos. Sure, the rib-eye or roast chicken for two help conjure a collective spirit but, when one person orders the entire roast chicken, swearing to bring home the leftovers, passersby offer cheerleader-decibel encouragement as if they have wandered into an episode of “Man vs. Food.” As the wooden slab of lemon-scented chicken whittles down to just a wing, bystanders offer a thumbs-up in support of the unlikely feat. Tables may appear independent, but the ’Cino crowd works in relative unison and unequivocal zeal.

The kitchen responds to this goodwill with a hefty portion of familiarity in pasta and potatoes. Bolognese and cacio y pepe make an appearance as do Chianti-braised short ribs on a mountain of mashed potatoes. It’s all feel-good food, including the unexpected presence of sandwiches on the dinner menu. The informal approach suits the space as piadine, gift-wrapped in wax paper, share a plate with sharp lemon-laced greens — casual but not without care. Chicken Milanese is served on grilled flatbread with white beans and chicories and, suddenly, a sandwich seems pretty special. No doubt Bar ’Cino’s most appealing characteristic is its “Cheers” mentality: Everyone knows everyone or they will by the time the meal ends. Servers offer their favorite dishes to indecisive customers and most are willing to forge common ground. 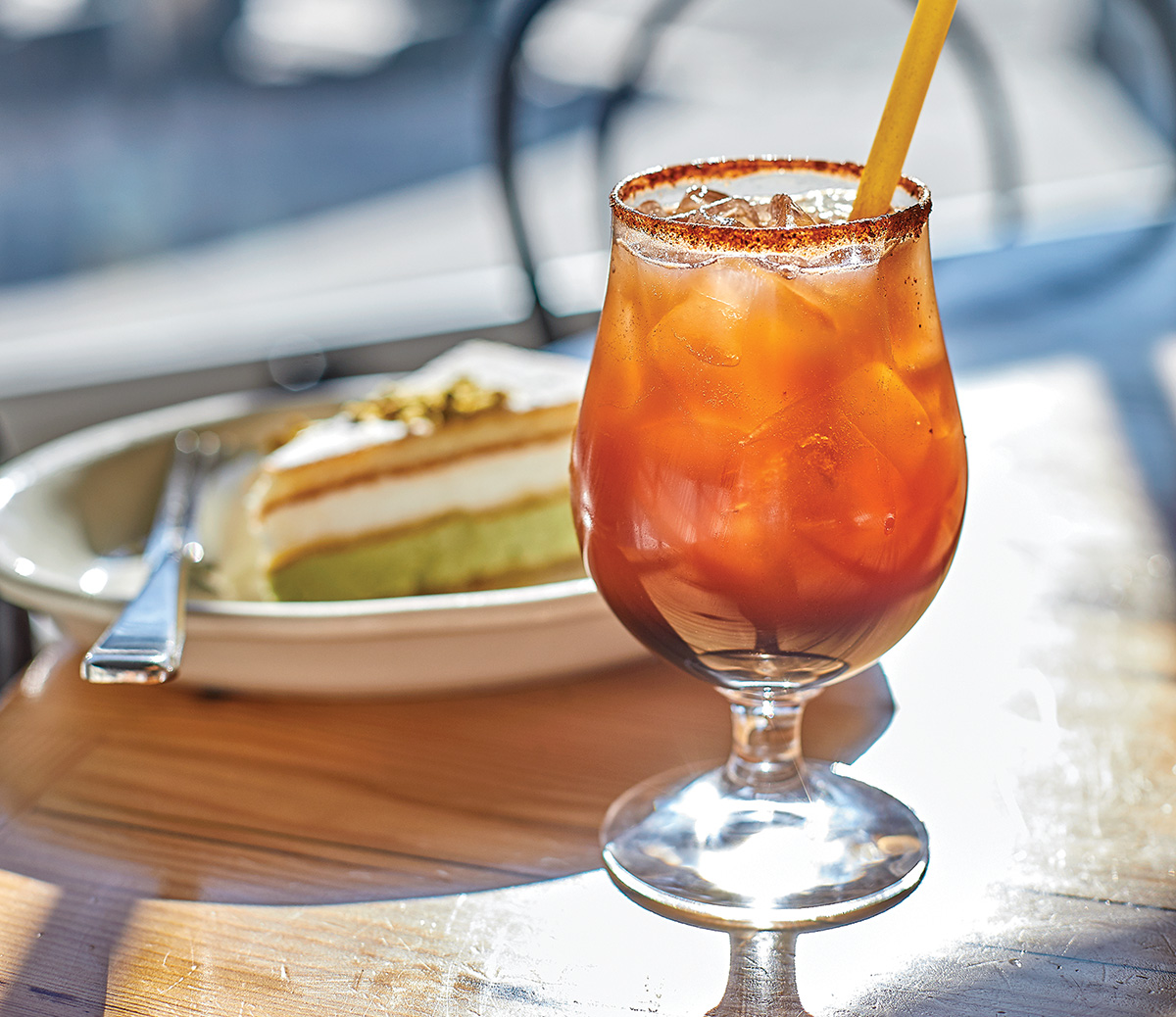 Not surprisingly, the space most closely resembles a bar, intimate in all the right ways and full of opportunities for hushed conversations. But the longer people sit, the more it feels like something different. Most people are drinking but the alcoholic merriment is eclipsed by the sense that you just wandered into a general store in a town your family’s lived in for four generations. Even the desserts come out in wholesome form: a square of tiramisu full of housemade ladyfingers and drenched so deeply in coffee that you could eat it for breakfast. A small dome of Nutella-rich chocolate cake calls itself a souffle but it’s more of a dense, barely cooked brownie or a lava cake that escaped the 1990s for more fertile ground.

But the most admirable sweet is a slice of pistachio-ricotta layer cake that bears a distant resemblance to the Italian flag and which, topped with coarsely chopped pistachios, is everything we have come to love about Italian cuisine. It’s both pristine and rustic, accustomed and extravagant in its just-sweet layers. 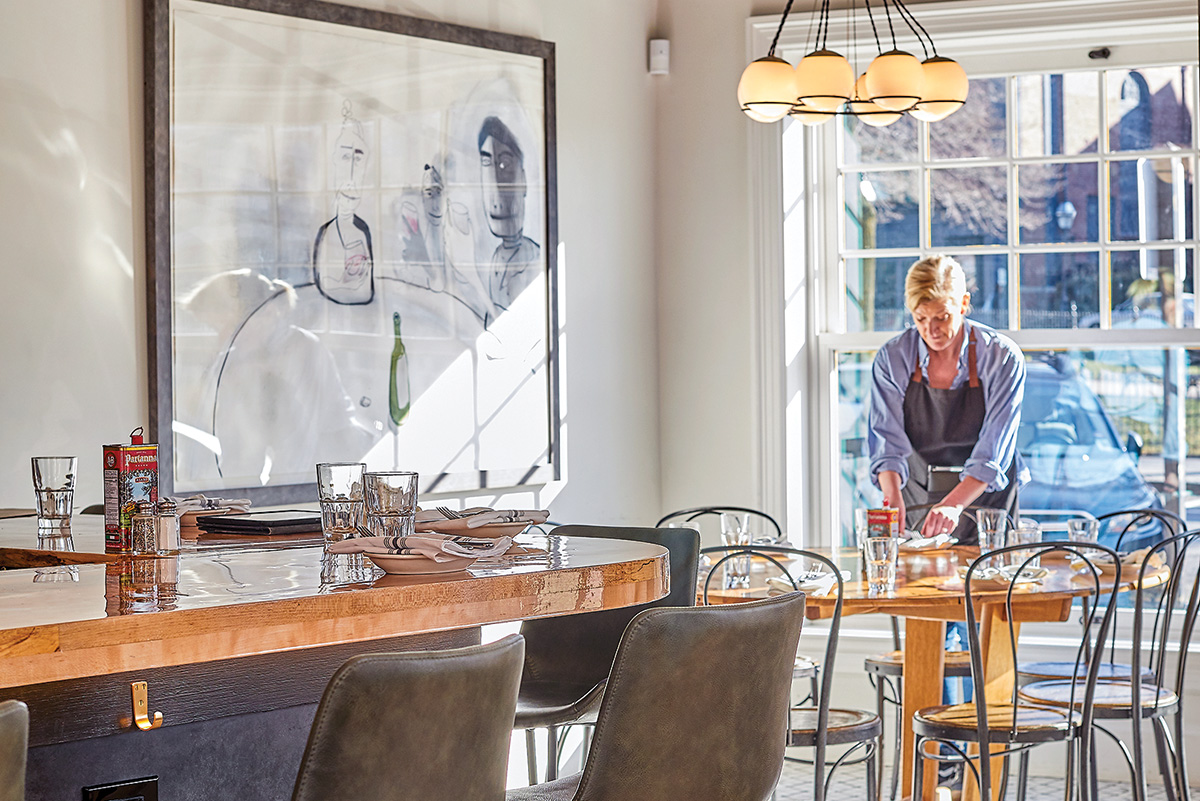 the interior of the restaurant is both industrial and rustic. Photography by Angel Tucker.

We may never tire of heading out to a restaurant that feels other-worldly and that transports us entirely. But Bar ’Cino makes it clear that coming home is always the best stop on any journey.