Birds of Prey are Making a Comeback in Rhode Island

They have safe nesting areas and plenty of food, plus lofty places to hang out. 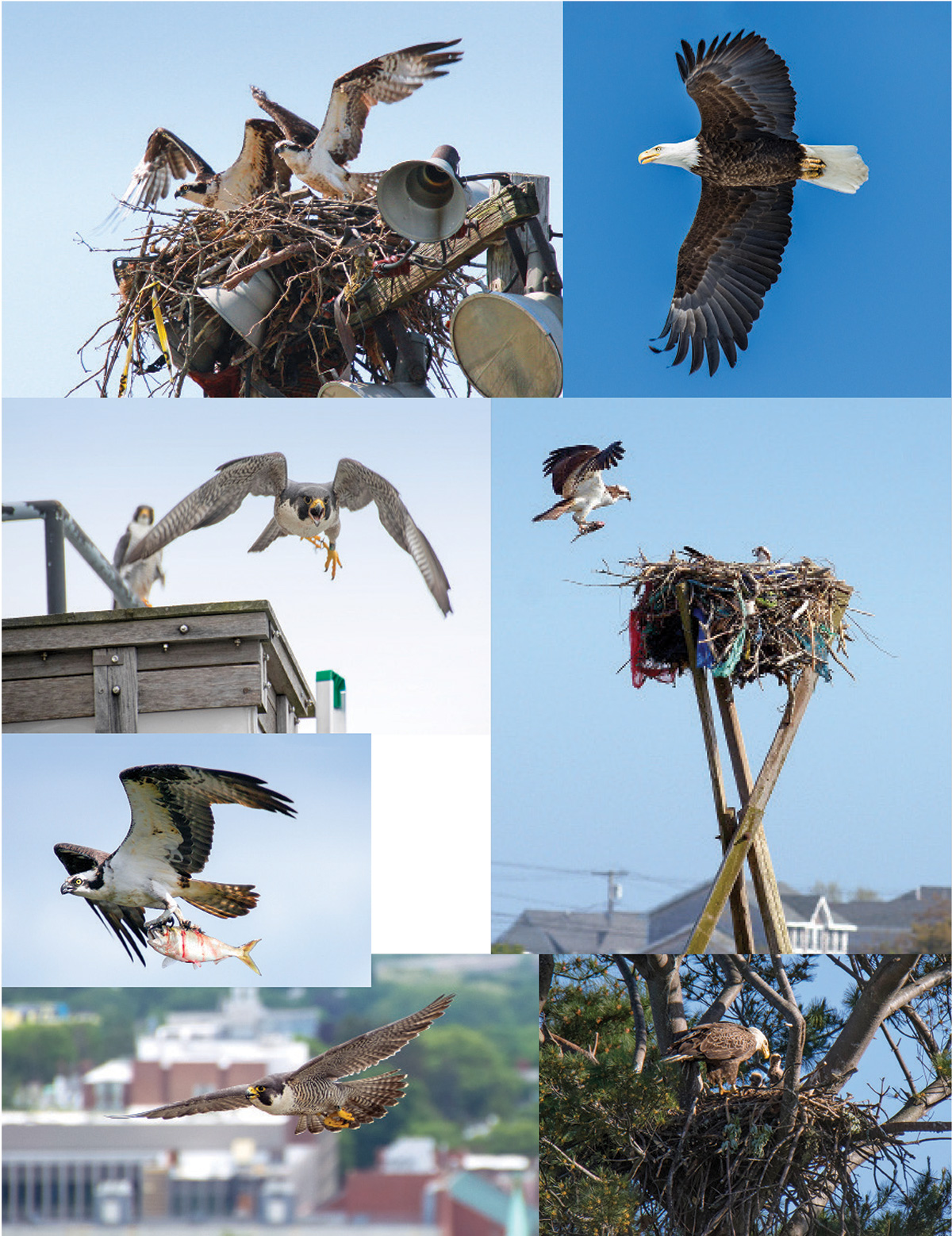 Clockwise from top left: an osprey nest, sometimes seen on top of a utility pole; an adult bald eagle; an osprey coming in for a waterfront landing to a welcoming committee; an eagle with its eaglets, who won’t sport their iconic white heads and tails until they’re about five years old; a peregrine falcon taking a tour of Providence; an osprey carrying lunch back to the nest; peregrine falcons thrive in urban areas with skyscrapers. Photography by Peter Green/providenceraptors.com

As Clarkson watches, an adult falcon soars around the towering building and lands on a railing four floors below the nest. It gazes skyward in all directions, apparently spies potential prey, then darts away, flapping steadily as it tours the city. Clarkson describes peregrines, which can swoop at up to 200 miles per hour and are found around the world, as “stout and powerful” birds that can adapt to a wide variety of environments.

The birds historically nested on tall cliffs, but since Rhode Island has no cliffs of the appropriate size, no peregrines were known to breed in the state until some falcons realized that skyscrapers could substitute for cliffs. Urban settings also provide plenty of easy prey for bird-eating falcons, such as the abundant pigeons, starlings and sparrows. The tall buildings also provide innumerable hunting perches from which to watch for their quarry.

As nice as the view of the falcon nest is from Benefit Street, it’s even better online. A webcam installed by the Audubon Society of Rhode Island allows anyone to spy on the intimate details of the peregrine family in their nest, from egg laying and hatching to the nestlings’ first meals and their departure from the nest. This year’s birds began by laying four eggs in May, three of which hatched, and when Clarkson visited, just two nestlings remained.

Like the bald eagle, peregrine falcons have always been visitors to Rhode Island, and they have long been common during migration, especially in autumn on Block Island. Their numbers plummeted globally during the DDT era, however, and by 1966, not one pair of peregrines raised a family east of the Mississippi River.

And just as with the bald eagle, efforts to reintroduce falcons to New England from captive-bred birds or relocated chicks from at-risk nests in the wild — a process called hacking — quickly succeeded in re-establishing the species in the region.

“Falcons were reared and released into environments that were deemed to have the appropriate habitat elements the birds were looking for to thrive and breed successfully,” says Clarkson. “You could hack them into any habitat type you wanted — rocky cliffs on mountains, bridges, skyscrapers. The bird is highly adaptable. That’s why they’ve done so well.”

Despite the Ocean State’s dearth of natural cliffs, the birds found that skyscrapers, bridges and other man-made structures suit them just fine. One pair even nested for several years on top of an aircraft carrier docked at the Newport Naval Station until the ship was deployed elsewhere. Those birds — or their offspring — are now frequently seen perched on the Newport Bridge, Jamestown Bridge and Sakonnet River Bridge.

According to Clarkson, five pairs of peregrine falcons successfully nested in Rhode Island between 2015 and 2019. And since urban areas are growing, the bridges aren’t in danger of being removed and more skyscrapers are planned in Providence, it’s likely that more peregrines will soon be seen nesting in the area.

“Rhode Island has a higher nesting density of peregrines than in other areas,” Clarkson says. “We have safe nesting areas, an abundance of food resources and excellent perch sites that they need for hunting. So it’s likely that the population will continue to grow.

“If Armageddon happened tomorrow and all we had left were cities, peregrines would probably thrive, because they seem to do well in the complete absence of what you envision as nature,” he adds. “For as long as pigeons and starlings do well, so too can peregrines.”

At the edge of a giant parking lot in the Quonset Business Park, where more than 1,000 Volkswagen vehicles are awaiting delivery to unknown destinations, a three-foot-tall nest constructed of hundreds of sticks is perched atop a utility pole. And barely visible in the nest is a female osprey incubating her eggs. Or perhaps she’s caring for her nestlings. The nest is so large and tall that it’s impossible to tell what she’s doing.

Gary Carlson, a wildlife photographer and RV salesman, watches the nest for fifteen minutes, takes a few pictures and makes some notes in a small yellow notebook before driving off in search of another nest. He does the same thing at a nest on a cell tower and two at a nearby marina, as well as at the site of a former osprey nest that staff from the business park apparently removed last year and replaced with four orange traffic cones to prevent the birds from trying again. (That strategy doesn’t always work.)

He finally arrives at the North Kingstown High School football stadium, where two osprey families set up housekeeping atop the poles supporting the lights that illuminate the field. As he watches through a spotting scope, a female osprey is visible with two nestlings in one nest, and her mate is perched on a crossbar just below. One hundred fifty yards away, another female osprey moves some sticks around her nest as a tiny nestling looks on. Her mate soon appears with a fish he probably caught at nearby Annaquatucket Pond, which he delivers to his family before departing on another fishing expedition.

“We want to know the landmark dates: when they arrive, when we see copulation, when the female begins incubating, when you start seeing tiny heads popping up,” Carlson says. “You watch the little ones grow up, and you grow attached to them. I tell my friends I’m going to hang out with my chicks.”

Carlson, one of nearly 100 volunteers with the Audubon Society of Rhode Island’s osprey monitoring program, makes extensive notes about the birds’ activities, then drives home, his work for the day completed. The monitoring program, established by the Rhode Island Department of Environmental Management in 1977 and transferred to Audubon in 2010, has tracked the growth of the state’s osprey population from fourteen nests the first year to 250 in 2018. 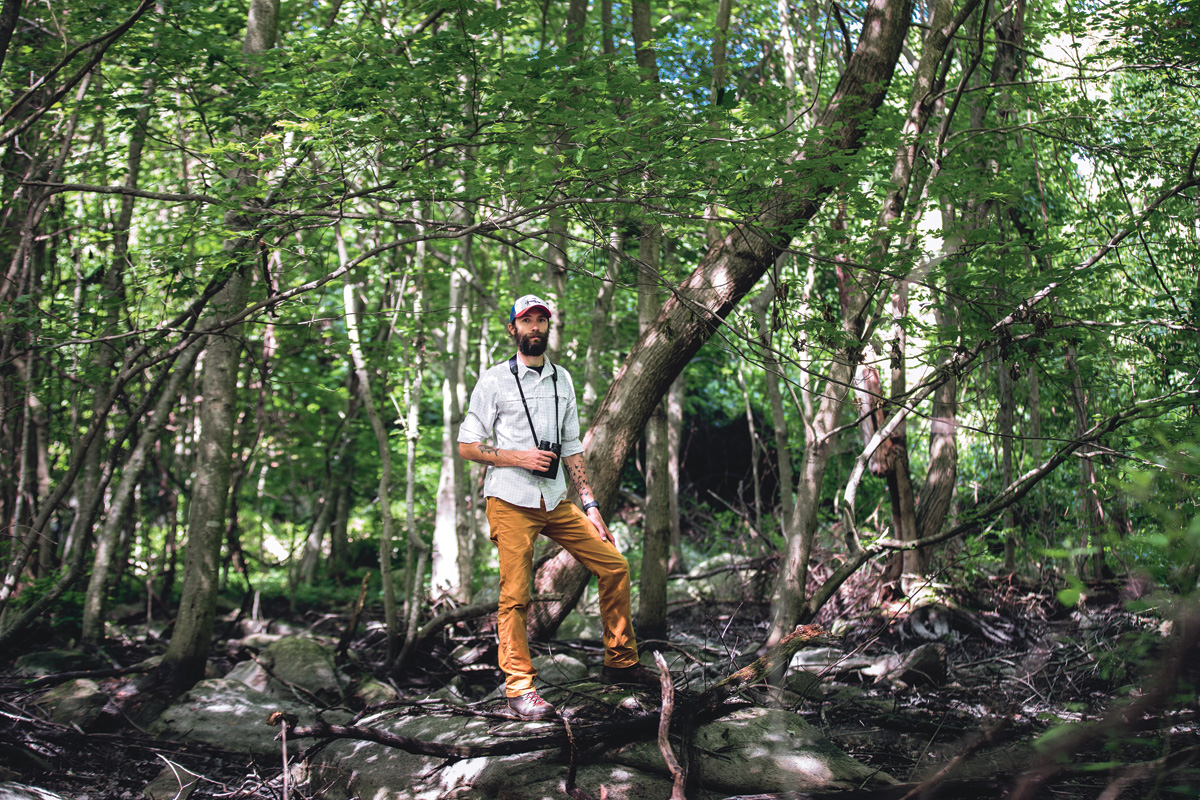 Clarkson is working on a five-year census of the state’s breeding birds, documenting details such as nest locations and head counts of young birds. Photograph by James Jones.

DDT caused ospreys to suffer a similar fate as bald eagles and peregrine falcons, but ospreys were never considered endangered and they never disappeared from Rhode Island entirely. More than 1,000 pairs of ospreys nested between New York City and Boston in the 1940s — including at least 150 pairs in Rhode Island’s East Bay — and while the population declined by 90 percent, that still left enough birds to jumpstart a recovery after the pesticide was banned.

“They made a rapid recovery because there were other populations of ospreys that were still robust enough that they were able to supplement the population,” says Clarkson. “Now we have a massive population.”

According to statistics from the monitoring program, 275 osprey chicks fledged from their nests in thirty Ocean State communities in 2018, forty-nine more chicks than the previous year but twenty-one fewer than the record 296 in 2016. Most were in South County and the East Bay, though nest and fledgling numbers in Kent and Providence counties are on the rise, too.

Ospreys are long-distance migrants. Most of the birds that nest in the Northeast spend the winter in Panama and South America, though some only go as far as Florida and Georgia. One bird hatched from a nest in Jamestown in 2005 was tracked to a swamp in Cuba.

Although ospreys are easy to see in summer at nearly every beach in the state and seemingly every other place where fish can be found, it’s unlikely that their numbers have peaked.

“The one saving grace about ospreys is that they only defend their nests, not their entire hunting territory,” explains Clarkson. “You could go to a marsh and see five or six osprey nests within sight of each other. They forage in rivers and lakes communally, which allows population densities to grow quite a bit. They can pack a lot of nests in together. So I foresee their population continuing to grow as long as we provide nesting habitat.”

Inbound,” calls Clarkson, standing on a bridge next to Pawtucket City Hall, where a pair of peregrine falcons has nested every year since 2009.

The nest box on the back side of the building is empty, because its three fledglings had departed just days before Clarkson’s visit. But as he watches, one of the young birds flies up the Blackstone River toward him, its wings pumping powerfully. It then circles City Hall twice before landing on a ledge below the nest.

Once they fledge, peregrine falcons begin to disperse and can range far and wide — the word peregrine means “wanderer” — but the fledglings from this nest haven’t gone far yet. Not with their parents still providing them with an easy meal.

To prove the point, an adult male peregrine appears in the sky above Clarkson carrying a large pigeon in its talons, then transfers the bloody carcass to its mate while they are still in flight, as two fledglings chase them to a turret atop city hall. Although the birds are hidden from view, it’s obvious what is happening because downy pigeon feathers drift up from the building as the birds tear the pigeon apart. While the fledglings fill their bellies, their parents return to their favorite perches on the building’s exterior to watch for additional prey, knowing that they succeeded in raising another Rhode Island brood of the fastest creatures on earth.