Birds of Prey are Making a Comeback in Rhode Island

They have safe nesting areas and plenty of food, plus lofty places to hang out.

Even before reaching the wide-open marsh that overlooks the Palmer River in Barrington, Charles Clarkson hears the high-pitched squeaky call of an adult bald eagle, a surprisingly weak sound for such a majestic bird. But when Clarkson emerges from the forest and glances around, he sees the bird disappear around a bend. His disappointment at missing out on a closeup look at the bird doesn’t last long though.

He knows the bird will be back soon to feed its lone chick, which Clarkson finds perched on the edge of a massive stick nest about three-quarters of the way up a large pine tree. The young bird, mostly brown but with a few scattered white feathers on its chest and wings, will not grow the iconic white head and tail of its parents for five years. But it still looks to be a powerful creature, nearly full-grown despite being just three months old and unable to fly.

According to Clarkson, an ornithologist at the University of Rhode Island who is coordinating a five-year census of breeding birds in the state, the nest site is in an ideal location for the eagles. It provides the adult birds with a clear view of their feeding grounds in the river while also hiding the young birds from nest predators like great horned owls. 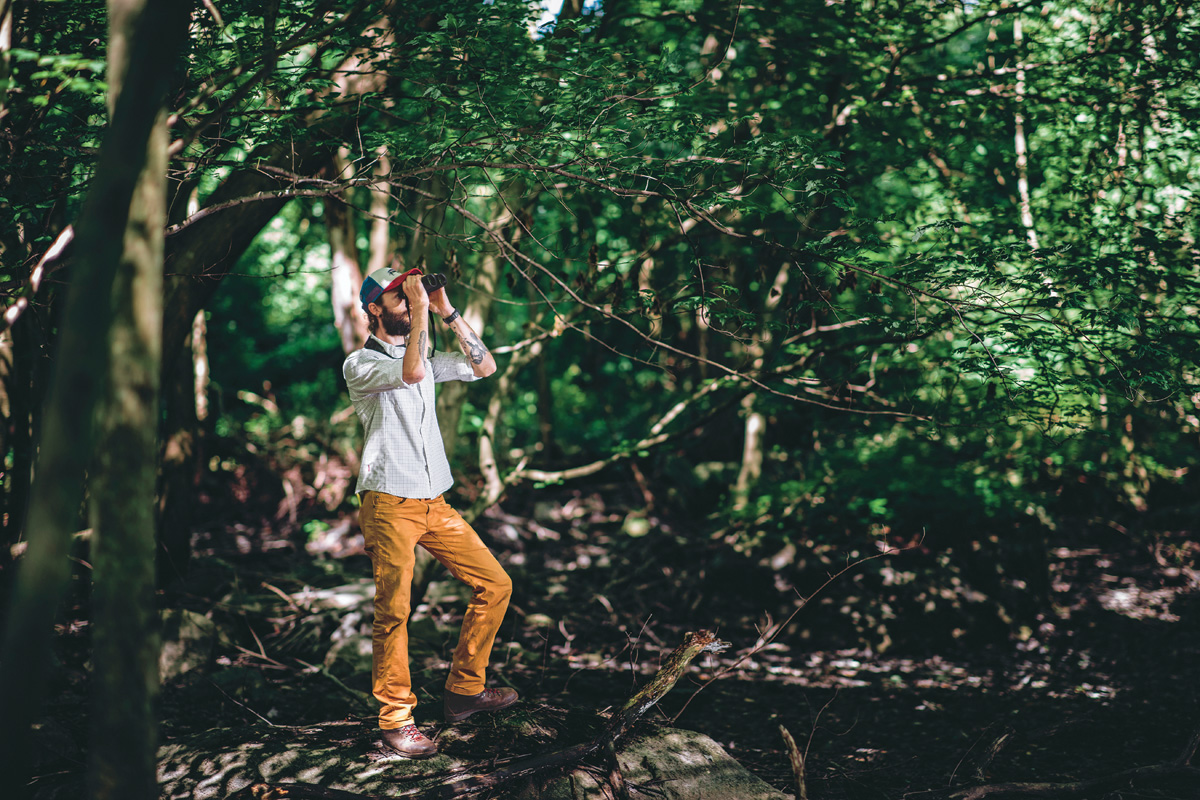 Clarkson’s objective for the day is to document eagle nest locations, collect vegetation data to create habitat maps of the sites and get a head count of nestlings. So he sets up a spotting scope to get a clear look into the nest, takes pictures and makes notes about the habitat in the vicinity and uses a GPS device to confirm the precise nest location. As he does so, he points out several osprey — fish-eating hawks that are seemingly abundant along Rhode Island’s coastline — soaring in the distance and landing on one of three visible nesting poles. Then the adult eagle swoops back into view, circles its nest briefly and disappears again.

“It seems to be put off by our presence,” Clarkson says to Catherine Boisseau, a member of the board of the Barrington Land Trust, which owns the property where the eagle nest is located. “It was bee-lining to the nest, but then saw us and veered off. My motto is the less impact we have the better, so we should head out.” 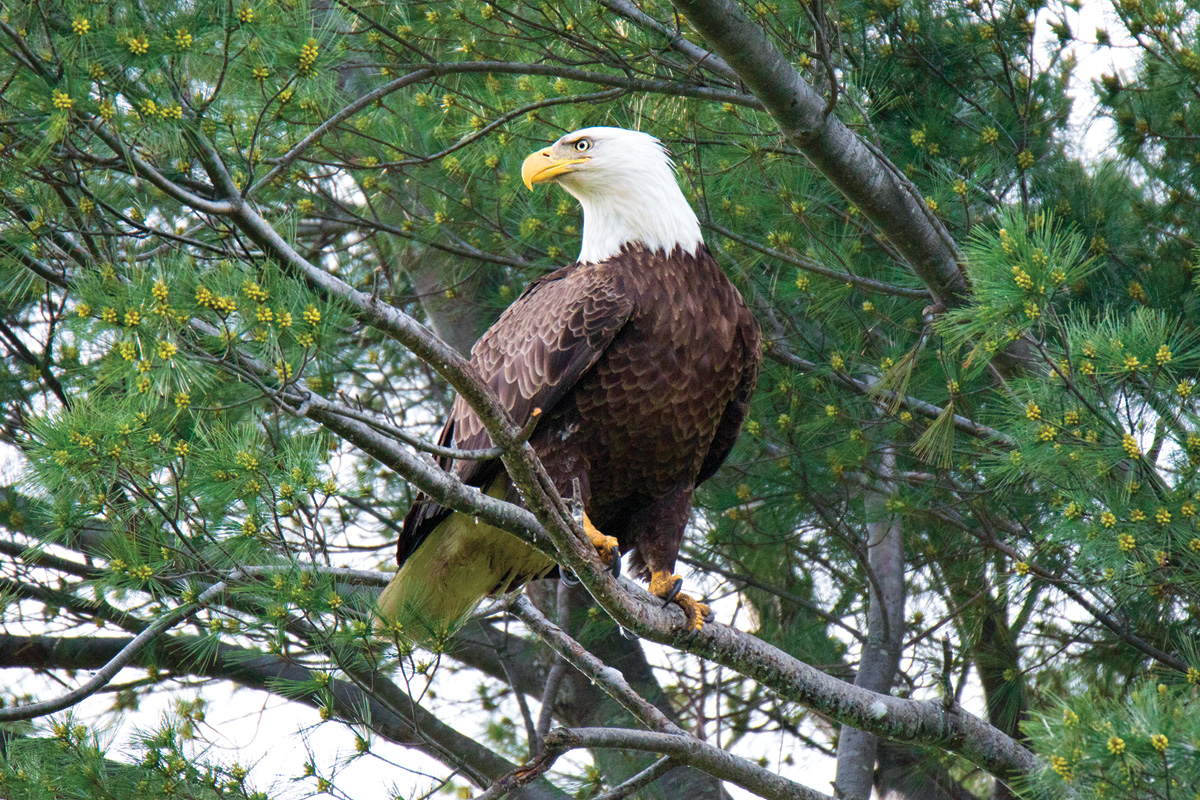 Half an hour later, Clarkson pulls his Jeep onto the shoulder of a road in East Providence to collect similar data about an eagle nest in another pine tree, this one on a golf course. On first glance, the nest looks empty, and part of the branch that supports the nest appears to have recently broken off and lies at the base of the tree. It’s a worrisome sign, since eagle nests can be five or six feet across and weigh hundreds of pounds, and the young eaglet would not survive outside of its nest at such a young age. No adult eagles are in sight, but Clarkson walks down the road to view the nest from a different angle, where he can barely see that the young bird remains alert in the nest.

Rhode Island was home to four pairs of nesting bald eagles in the spring and summer of 2019. Several others exhibited breeding behavior but are not known to have laid eggs, and dozens more spent at least part of the winter in the state. As many as ten eagles have been observed together on the Seekonk River in Providence in winter, and additional birds can be found almost anywhere open water remains in January and February.

The eagles, along with peregrine falcons and osprey, have made a dramatic comeback in the state after facing near extinction due to the effects of DDT, an insecticide used from the 1940s to the 1970s that caused the birds’ egg shells to become so thin that they broke when the birds tried to incubate them. It led to almost complete reproductive failure in much of the country for all three species.

“DDT is an organochlorine, a type of chemical with a very high persistence in the environment,” explains Clarkson. “When it gets on insects and those insects are consumed by higher trophic levels — first fish and then eagles, for instance — it bioaccumulates and gets stored in their fatty tissues. It makes the mobilization of calcium difficult, which translates into a thinning egg shell that makes it impossible for large-bodied birds to support their weight on their eggs. Multiple breeding seasons of nesting failure led to dramatic population declines.”

The pesticide was banned in 1972 and, after a long absence, the birds are back in Rhode Island and their populations are growing at a remarkable rate. Based on historic records maintained by Rachel Farrell, a member of the Rhode Island Avian Records Committee, the first record of an eagle nest in the state, on an island in the Scituate Reservoir, was in 2003.

“Most likely what we’re seeing now is that the populations in states around us are growing at such a rate that immature birds are engaging in exploratory flights looking for new habitat and new territories,” says Clarkson. “They’re finding their way to Rhode Island and deeming it suitable for nesting.” 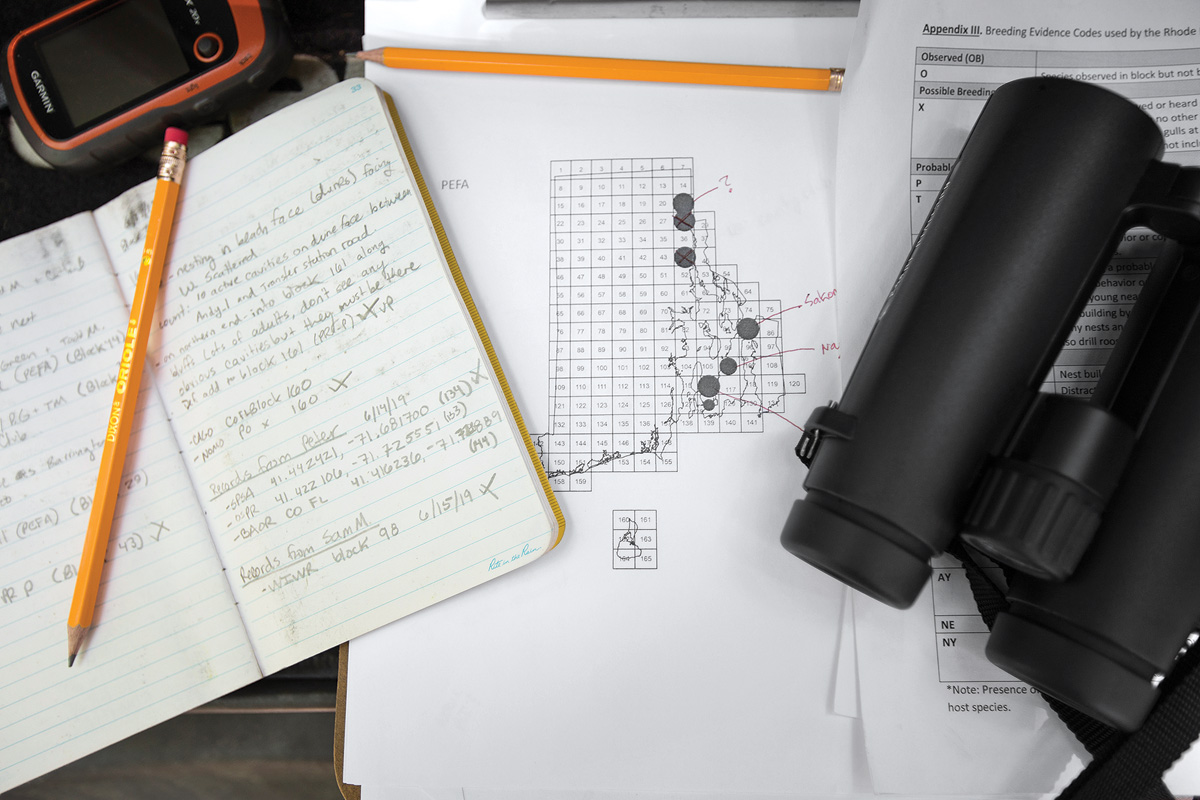 The state’s first breeding eagles originated from nests in Massachusetts, where the breeding population had disappeared by 1905 due largely to shooting, harassment and loss of habitat, according to Tom French, a retired official with the Massachusetts Division of Fisheries and Wildlife, who monitored bald eagle numbers in New England for thirty-five years. The Massachusetts eagle population got a boost beginning in the early 1980s from forty-two wild-hatched chicks that were released in the state in hopes of reestablishing a breeding population. The offspring from those eagles formed the foundation of the Rhode Island population. But it has been a slow recovery.

“Bald eagles are long-lived birds; their biology doesn’t permit rapid population growth,” Clarkson says. “A pair will find a territory and defend it for years, and it gets passed on to successive generations over time. It’s a slow process. They only fledge about one chick at a time. Even in the best of times, they don’t grow their populations rapidly.”

The number of bald eagles that spend at least part of the winter in Rhode Island is growing faster than the state’s breeding population. But even that isn’t consistent, due mostly to the weather. The breeding birds probably remain in the state year-round, but as the winter approaches and lakes in Canada and northern New England begin to freeze — preventing the birds from accessing fish — those northern eagles move south to the closest area where water remains open. And that is often Rhode Island.

“It’s common for immature bald eagles to exhibit a nomadic lifestyle, so when their freshwater hunting areas ice over, they head south,” says Clarkson. “That’s why we get individuals overwintering at lakes that remain ice free and all along the southern coastline. And that’s probably been the case for a long while in Rhode Island.”

Most winters, the peak of eagle arrival in Rhode Island is early- to mid-January, and then they depart again for their breeding grounds. Some, especially the younger birds, may stick around because the state has plenty of food and available habitat to sustain a larger population of breeding eagles.

“There’s no limit on food around here, and nest sites aren’t a limiting resource either,” says French. “There are plenty of reservoir shorelines in Rhode Island for these birds to nest on. There may be behavioral territorial limits because their home range is large and they may run into competition with other eagles. But that’s the only thing that would hold them back.”

The view of the downtown Providence skyline from the sidewalk in front of the First Unitarian Church on Benefit Street offers pleasant vignettes of the bustling city. But with a high-powered spotting scope, it’s also an excellent vantage point to look into a peregrine falcon nest on the twenty-ninth floor of the now-empty Industrial Trust Building, known to many as the Superman Building. Forty falcon chicks have fledged from there in the last twenty years. In mid-June, two falcon chicks perched on the edge of a wooden box — installed in 1996 as a nest site but not used by any falcons until 2000 — flap their wings in anticipation of their first flight, which would take place a few days later.