Sullivan's Publick House and Barnaby's have mastered the art of burgers and beer.

Barnaby’s Public House comes with a sordid tale of murder that involves a Providence millionaire, an incapacitated wife and a hot toddy full of arsenic. But inside the doors of the Victorian-style saloon, people are more concerned with hedonism than history. The after-work crowd flocks to Barnaby’s in droves, filling the air with cocktail orders and cries of relief that the office day is done. The fact that they find themselves in a wood-paneled room with gilded mirrors gets lost after the second round of drinks but the clash of cultures — British aesthetic, global food, American temperament — remains agreeable.

Brick columns, wired cabinets and frosted pendants do have some effect: Men finally have a place to wear corduroy blazers with suede elbow patches and their cordovan wingtip shoes. This is a place to drink in style, a place where people tend to sip on green chartreuse, cherry heering and orange bitters. The millennial crowd pack themselves sardine-like into leather booths and declare loudly that the world is theirs to mold, while couples at the bar lean in closely to forget the world altogether.

The menu, however, brings everything down to earth. Barnaby’s does make a mean and massive fish and chip platter on Fridays but the kitchen’s gaze is largely in the Midwest. Burgers are thin and served double or triple ($14/$16), stacked high like a fast food prototype. (“Jesus,” says a slim man in a tweed vest, barely chewing his food. “I didn’t expect it to be this good.”) Jalapeno pimento cheese ($10) is served like large scoops of ice cream surrounded by thick toast triangles. Even a modern dish of Korean ribs and kimchi ($14) bears a vague resemblance to the chewy wedges that Chinese restaurants pack up in foil bags for takeout. That’s the dichotomy of Barnaby’s: It may look like another country in another century, but a public house is all about celebrating the familiar and, here, every plate of cheese-drenched fries testifies to it. 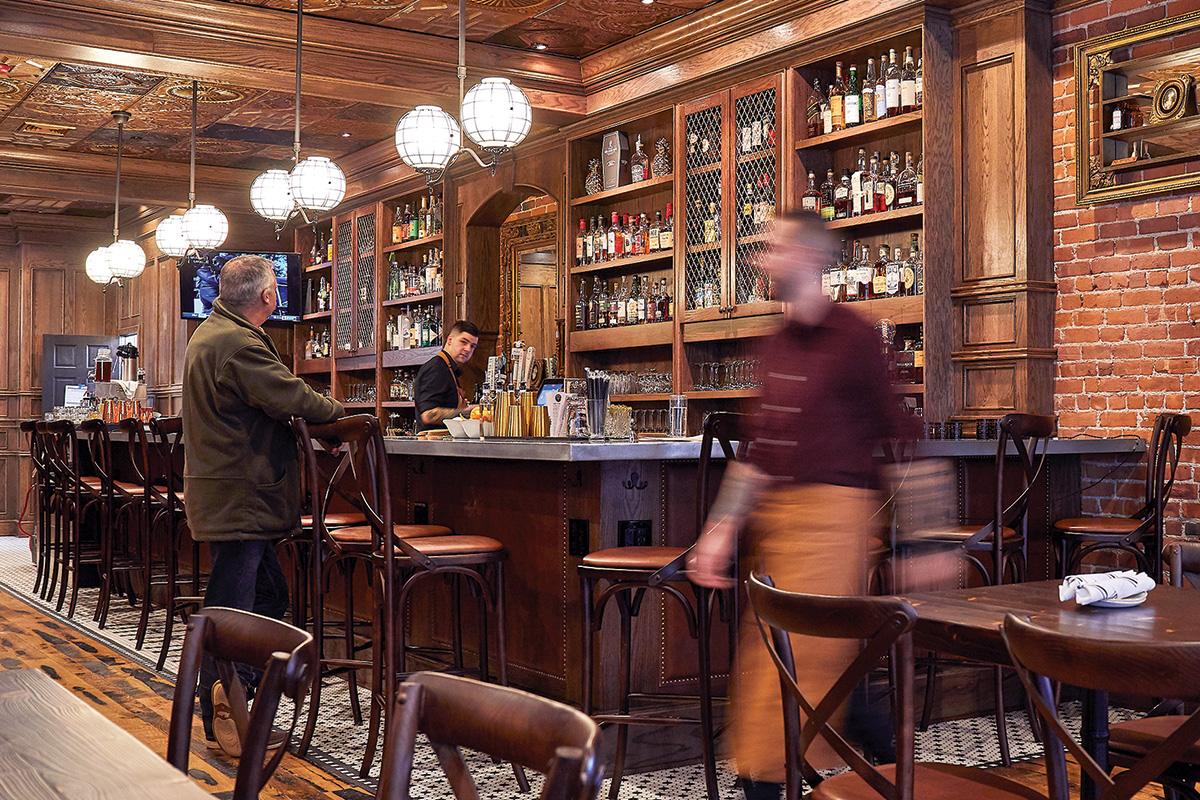 Parties do tend to reach a fevered pitch, though. The reproduction tin ceilings are lovely to look at, but they don’t buffer the often-jarring din. There are a host of gems on the menu that go overlooked simply because you get tired of yelling to a person three feet away. The sweet spot resides post-happy hour and pre-late night, when young people are getting dressed, slightly older people are putting their kids to bed and Barnaby’s takes on a more reserved tone. It’s a good time to sit with a spiked coffee and dessert because retro works particularly well at this point.

You may not head to a public house for ice cream but, oozing on a toasted bread pudding coated in whiskey sauce ($7), food creates all kinds of community. Even the house sundae ($8) — loaded with cookie dough, brownie chunks and liquid marshmallows — makes it clear that Barnaby’s can have fun with minimal booze. Its mood changes depending on the hour and the crowd, but it’s always in pursuit of a good time.