Jerry needed to be convinced his name would never get out, for the sake of his job. But his suffering didn’t go unnoticed. Two friends took him to a treatment center in upstate Massachusetts. He stayed for two hours, said “I ain’t doing it” and left.

“We’ve all seen it,” says Jerry’s wife, Ann. “They all have this macho form about them that says, ‘I don’t need help, I can handle this.’ ”

Jerry didn’t talk to his family about what he’d seen on the job, so Ann assumed his shutdowns were related to current calls, not past ones on an endless loop.

“I remember it was this time of year, when it would get dark early, and the bedroom light would be on,” she says. “That meant he was in bed at 5 o’clock. I thought: If I drive home and that light is on one more time, I’m going to drive right through the bedroom.”

Jerry didn’t just want to be alone; he thought he was alone. Ann remembers him saying, “You guys aren’t here for me.” But Ann and their two kids were always on the other side of that closed bedroom door.

Whether or not he could grasp it, Jerry had a lifeline in the back of his mind: Anne Balboni. Her team responded after a youth fatality in 1990. They responded after The Fire. And, the day of the fifth anniversary, Balboni responded to Jerry’s phone call for help.

Eventually, Jerry was diagnosed with PTSD. He wasn’t planning on leaving the department — he fought cancer and returned to work — but his doctor told him if he didn’t stop, his anxiety would get the best of him, he’d have a massive heart attack and he would die. Jerry retired in 2009 at age fifty.

Distance from the job, talk therapy and the right medication didn’t mean Jerry was better. He was constantly triggered by news of big fires with mass casualties: Thailand, Russia, Taiwan, Los Angeles. That’s when he’d bottom out. Balboni also worked with the kids and Ann on how to protect Jerry from triggers. Little did Ann know, she was triggering Jerry from inside the house.

“I’d be struggling with a rug and say something like ‘I just want to throw it outside and burn it,’ ” Ann says. Even the mention of fire could inspire a shutdown.

Balboni’s guidance was useful, but the person who helped Ann most was her daughter, Jenna, now twenty-six with a degree in psychology. “Jenna said to me, ‘He’s sick. It’s a disease. He’s sick.’ And kinda from that point on, I understood.” 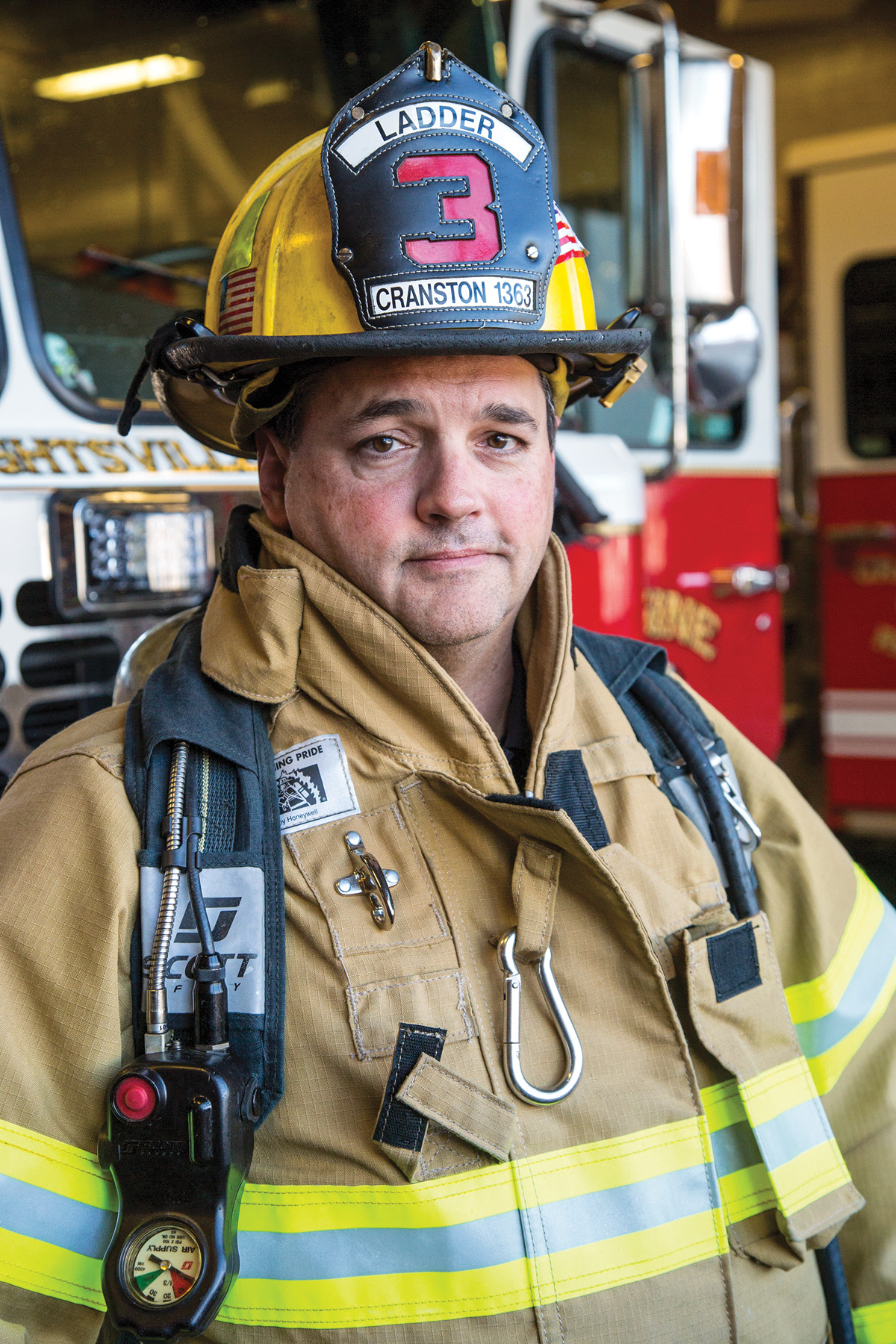 Robinson, president of the city firefighter’s union and vice president of the State Association of Firefighters, is fifteen years into a mental health awareness campaign in Cranston, and he’s noticing a gradual sea-change.

Robinson’s campaign is inspired by his own experiences at the Station nightclub fire in West Warwick. His recollections, still visceral, shoot like water from the nozzle he operated until the fire — ignited when the band’s illegal pyrotechnics display caught on flammable acoustic foam — was finally out. The Station was not equipped with sprinklers and, five minutes after the first spark, the overcrowded club was engulfed in flames.

“We had no idea how many people were in there,” Robinson says, until his engine was put on body recovery at the entry, where dozens perished in a crowd crush just feet from the exit. The parking lot of the nightclub was filled with cars, so responders set up a makeshift morgue in a lot next door. In between recoveries, they took breaks at the Cowesett Inn, where horrified families waited for word on their loved ones. The gallows humor firefighters often employ on grisly calls, which acts as an emotional firewall, would distress survivors and families — the real victims — and Robinson says he lost his ability to cope. He also couldn’t leave; other firefighters from Cranston never relieved them.

After about seven hours on the scene, Robinson and his shift mates returned to the firehouse — another firefighter held a trash bag for his colleagues’ clothes; “that’s peer support,” Robinson says — and Robinson went home to his wife and young children. A few hours later, he returned to work for an overnight shift. A CISM team was there for further debriefing.

Robinson was still processing the fire and he didn’t engage. He was angry his shift was never relieved; he was angry about the flier in his mailbox comparing Cranston firefighters to terrorists for holding the taxpayers hostage — so angry he called up his union head and, in a moment of dislodged fury, threatened to pay a visit to the flier’s author. Robinson’s chief was called in, and he learned why other Cranston firefighters weren’t deployed to the Station that night. His chief told him, “We didn’t want to contaminate everyone.”

Firefighters are taught, from the start, “This isn’t your emergency.” The same goes for mutual aid. This was West Warwick’s fire, not Cranston’s. Yet Robinson was disturbed by flashbacks from the scene, including a victim he recovered whose face, despite the fire that licked around her, was unscathed. Every time Robinson closed his eyes to kiss his wife, he saw that woman.

It took three years, when Robinson and his now-ex-wife were in marriage counseling, for him to open up about what he saw. He was there for a thirty-year career, so he took the leap with therapy and was diagnosed with PTSD, which he never mentioned to the city. Instead, he channeled his personal struggles into his peer support program.

The program — modeled after the Providence fire union’s for substance abuse, where active firefighters serve as sounding boards and offer referrals to vetted therapists — has since expanded into a membership assistance program with bridges to several resources, including financial services, marriage counseling and elder care. The peers also support firefighter families in need.

In 2008, Cranston fire lieutenant James Pagano was murdered by his neighbor, a retired cop, during a birthday party for Pagano’s young son. Members of the department, who responded to the scene, needed support in processing the senseless tragedy. But Robinson also helped the Pagano family enroll in therapy at Friend’s Way and Camp BraveHeart, a summer program for kids who have lost loved ones.

“We couldn’t have made it without Scotty,” says Pagano’s wife, Adriana. “I could call him today…. He’s like a superman.”

Also in the works is an eight-hour class that teaches resiliency practices to active firefighters. Robinson has already introduced several such strategies, including yoga for first responders, which he branded as “tactical stretching.” They held a class one Sunday morning last year and a couple dozen people showed up, but attendance dwindled at subsequent sessions.

“It was getting into football season,” he says. 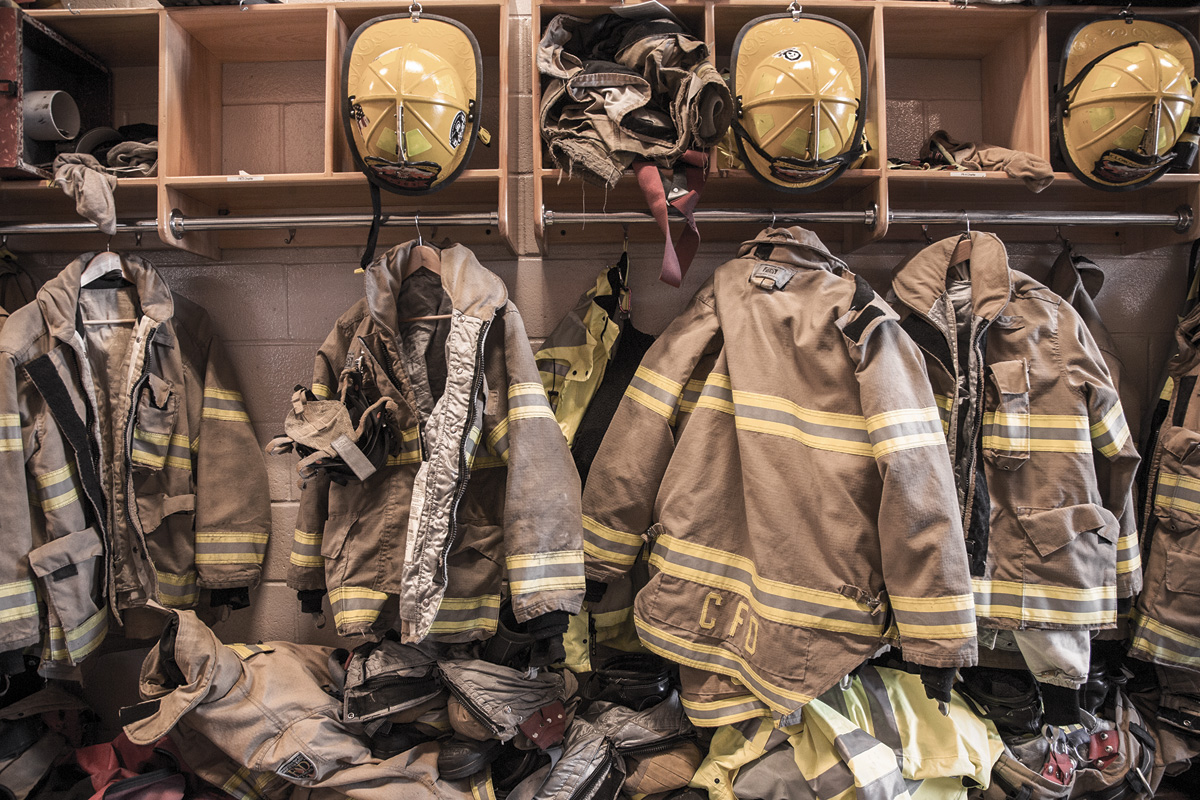 The firefighter lifestyle eats at a person’s resilience, says Robinson, but on this day in fall, the men at station three in Cranston will eat well. It’s just after morning chores and they take a few minutes to make a grocery list for the day’s meal: tortellini salad with vegetables. Everyone chips in $5, so the process is democratic; green olives will be served on the side.

The men are seated around the firehouse’s kitchen table, large and glossy with a massive clown face routed into its center. Clowns are around every bend, from a high corner in the kitchen to a dark spot in the apparatus bay. They even had patches made.

The clown is the station’s mascot, inspired by one of the wives’ odd friendship with Ringling Brothers circus performers, whom she befriended when they were in town for a show. It’s hard to imagine tough conversations happening in such a funhouse, but the group is known to compartmentalize.

“You deal with it and put it behind,” says one, a lieutenant. He recalls a rollover a few days back on Route 10 — an accident he mentions three times. “A guy died on impact and it didn’t bother me at all.” “The nature of the work is disaster and chaos,” says another. “The big thing to settle in your mind is that we can’t control what goes on out there. You can go down a rabbit hole; anyone with a conscience will think about what they did.”

They remember one of their own who died by suicide last February, forty-two-year-old Jeremy Wall, a father of four. By all accounts, nobody knew he was struggling.

“I saw him a few hours prior and we were laughing, carrying on,” one recalls. “You really don’t know what people are thinking.”

Wall was one of three Rhode Island firefighters who died by suicide in 2019. Five firefighters took their own lives here since the beginning of 2017, according to a count by a Department of Health epidemiologist in December. It’s a national crisis: The Firefighter Behavioral Health Alliance, which tracks and verifies suicides in the fire service, confirmed 111 firefighter deaths by suicide in the United States in 2019 but estimates only about half are reported.

In September of 2017, Wall sustained a traumatic brain injury — not by running into a burning building but by driving his minivan down the road. Wall was in the car with his young daughter when another motorist, who was being pursued by police, smashed into his driver side. The impact shattered every window in the car but Wall didn’t break a bone. Instead, he suffered a concussion and went out on sick leave. His providers never warned him about the correlation between brain injuries and suicide; a Danish study from 2018 found the risk increases threefold in the first six months post-injury.

Adventurous and a deep thinker — his nickname was “The Dude” for his laidback attitude — Wall rarely smiled after the accident. He sought mental health counseling once but didn’t connect with the provider and was reluctant to find another one. He worried seeing a therapist might affect his job or his custody agreement for his daughter. He also felt judged for being out for so long with an invisible injury. After his sick days ran out, his fellow firefighters donated their own time. But he didn’t want to ask for more and returned to work after eight months.

“He wanted to get back, but I didn’t think he was ready to go back,” his wife, Ashley Wall, says from her kitchen table in North Smithfield.

Wall resumed night shifts at the station while caring for their two boys, ages two and younger, during the day and his daughter on weekends. Ashley knew he had to be struggling with calls — he was overwhelmed by grocery shopping, never mind fatal accidents and house fires — but he didn’t want to talk about it.

On New Year’s Day of 2019, they learned they were expecting another baby, and Wall told his wife she’d have to slap the smile off his face. A month and a half later, Wall was dead.

Deep down, Ashley says, she believes it was an impulsive decision. They argued that morning but he had been in a good place. They were taking the kids to the ice castles in New Hampshire that weekend. They were putting in an offer on a bigger house. He was trying out a new therapist.

“He stretched himself so thin to please everyone, and he did a very good job putting a front on,” Ashley says through tears, their five-week-old daughter — named Jemma, after her dad — cradled in her arms. “I wish I understood it without having to go through all of this. He was so strong. How did I end up here?”