Some people travel to warmer climes on spring break. Meredith Pearson traveled to Poland to help Ukrainian refugees, raising $34,000 – and counting – along the way.

THREAD: So, I’m heading to Prezmysl on the Ukraine/Poland border to assist w/ report back on the refugee crisis. Academic friends on Spring Break who can get on a plane at short notice: you can have an outsized value this week if you do the same. Here’s why, and how.

The next day – not knowing a word of Polish, Ukrainian or Russian – she boarded a plane for Poland to help Ukrainian refugees fleeing from war.

It wasn’t quite the way Pearson expected to spend her spring break. After all, this was the first time in eighteen years that she found herself alone without any responsibilities: Her children were all with friends for the week, and Pearson had plans for some serious closet reorganization.

But something about the tweet from UMass Amherst professor Charli Carpenter resonated with her.

“I looked at it and said, ‘That’s crazy,’ ” says the Providence resident. “But then I thought, ‘Wait. I could actually do that.’ ”

So she contacted Carpenter – whom she didn’t know – bought a plane ticket for Poland and found herself the next day in Przemysl. There, people with vans and SUVs were needed to distribute refugees, medical supplies, food and generators to the Poland/Ukrainian border. After meeting with Carpenter in person, she rented an SUV and got to work.

She filled her car with food, medicine, bandages and 100 first-aid kits, which were put into backpacks and delivered to the front lines. She purchased everything with proceeds from her GoFundMe page, which she created only on Carpenter’s suggestion and emailed to twenty friends and family members.

A message that Pearson, center, received from two Ukrainian mothers after helping them on their journey. “They were so exhausted and scared and yet they managed these smiles, and this gratitude,” Pearson says.

The second day in Poland, she went to the border town of Hrebenne, where hundreds of people were arriving by cars, buses and on foot. Many had been traveling for days, and most were two or three generations of women and children who had left behind fathers, husbands, sons and friends.

“They were exhausted and scared, just in a state of trauma and shock,” Pearson says.

The border closed at 9 p.m., but people in line were still crossing over at midnight. Many were families with small children. Pearson invited some back to her small hotel, where the owner welcomed them, giving them hearty meals and a warm place to sleep for the night.

“This way, they didn’t have to go back and sleep in a big gymnasium with their children and elderly moms,” she says. “It was nice for them to have someplace to rest before the next step in their journey.”

She’s stunned by the generosity and kindness of those fleeing their homeland. 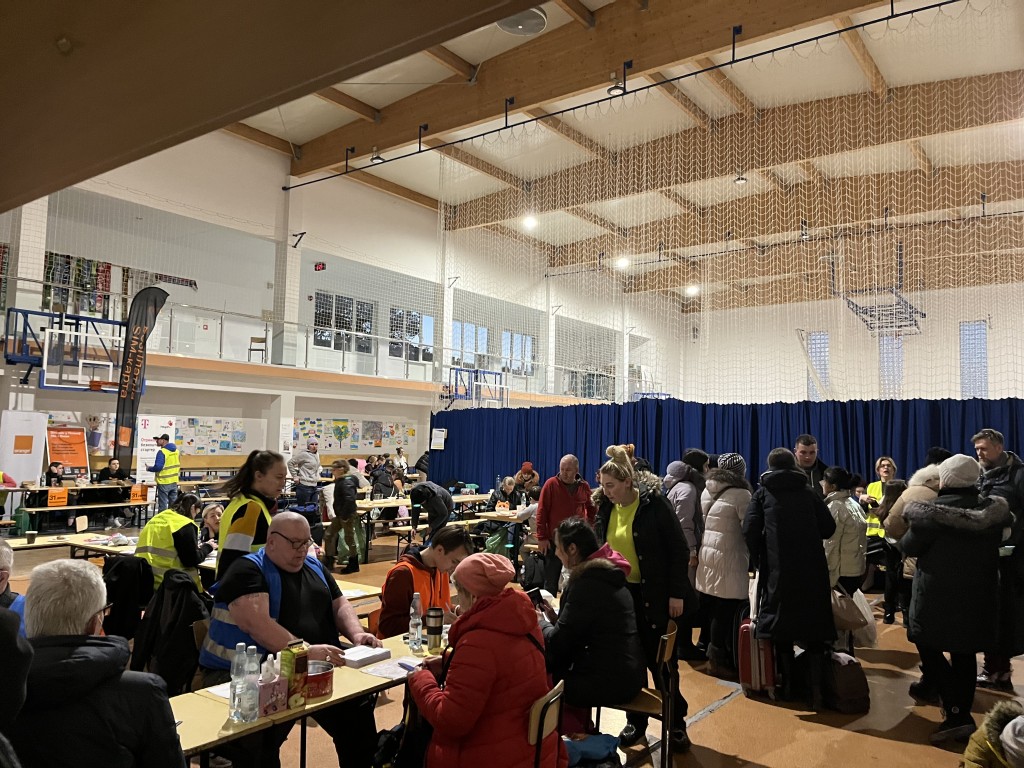 A center for refugees crossing the border from Ukraine into Poland.

One twelve-year-old girl stayed at the hotel and returned to the border in the morning with Pearson, translating and directing newly arrived families toward supplies and hot food. She met two mothers who had been traveling for two days with two toddlers and a grandmother in tow. They were brought to tears when they heard how many of Pearson’s families and friends back home had donated to her GoFundMe page.

“The refugees couldn’t believe that so many random people were interested in helping them,” she says. “I’d tell them how my friends couldn’t come, but sent money instead to help you, and it brought tears to their eyes every time.

“It gave them great comfort when they were so scared and confused that a community of people had their backs in some small way.”

Pearson is now back in Providence, but her friend and neighbor Lorne Adrain has picked up where she left off, joining the relief efforts in Poland and updating her GoFundMe page on a regular basis. She even got to have dinner with Carpenter, who was in town for a panel at Brown University, Monday night.

“It’s so neat to map out these connections,” Pearson says. “These networks are just expanding and growing and becoming a wonderful supportive web of people who are helping so many people in need.

“It’s so gratifying to see all of this happening, just from seeing one random tweet on the internet.”

A Local Ukrainian’s Perspective on the Situation in Her Homeland