The cityside tribute to the local raw bar expands with a second location. 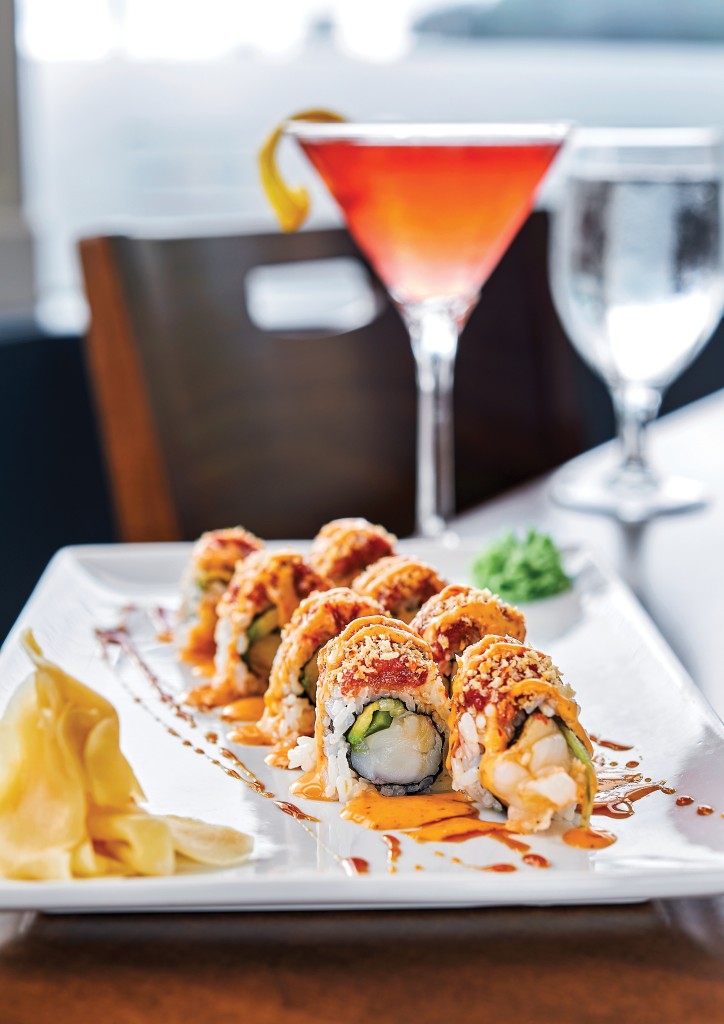 A chronic roll featuring tempura shrimp is served with a cocktail. Photography by Angel Tucker.

Despite the state’s moniker, seafood restaurants remain surprisingly elusive in Rhode Island. Seasonal shacks — loaded with fried clams and lobster rolls in the summer months — are exceptions, but once autumn hits, the options whittle down to a handful of kitchens that focus almost exclusively on seafood. Those who choose to dedicate themselves entirely to fish and shellfish have a challenge: proving that a menu can tell a classic New England story without forfeiting the creativity that undergirds new restaurants.

When Providence Oyster Bar (in the capital) took on the task years ago, it was through a surreptitious lens — a dimly lit bar in the center of Federal Hill whose middle name alone gave away the secret. But when they opened their second restaurant in East Greenwich this past May, the approach was far more explicit.

This version is a sprawl of seats, from the dining room and patio to a series of private dining tables and a bar that’s tucked into a corner rather than taking the spotlight. Inside the suburban space, walls are saturated in dark oceanic blue and covered in Dave Whitbeck prints of Goliath-sized fish. Areas beyond the main dining room are decorated in photographs of Technicolor buoys and fishing nets, while a map of Rhode Island looms overhead like a parachute.

It’s nowhere near the water, but the dining room is bright and airy, and it’s clear that this expansive outpost is geared toward the whole neighborhood: Families, business groups and adult sports teams all look at home in a space that’s run by a seasoned staff who know when to make small talk (“I’ve brought the liquid vitamins,” says one server, delivering a bottle of pinot noir) and when to hustle (the daily afternoon block from 3 to 6 p.m. that goes by “appy hour” and features $1.50 oysters, $1 littlenecks and cherrystones and a menu of $9 appetizers).

While the Providence POB focuses on the intimate — it’s a railroad-style space in which every diner shimmies down the center aisle — East Greenwich is a communal enclave split into a variety of vignettes. It’s worth noting that the DiBiase family owns not only these and several other restaurants, but Block Island’s Spring House Hotel as well. In fact, it’s hotel hospitality that’s evident here and which allows function rooms and casual dining to coexist without an identity crisis.

The menu, of course, plays a part as well. Half of the menu is old school: the dishes that visitors travel to New England for and that manifest nostalgia in longtime residents. Lobster is stuffed (hot or cold) into buns while scallops, shrimp and buttered breadcrumbs are stuffed into lobsters. Scallops and cod are fried with fries ($29), but these are firm and meaty renditions, only vaguely related to the subpar beach versions of childhood. There are also simple fish steaks — halibut, salmon, swordfish — with a variety of seasonings (capers, herbs, tomato) that feed right into the old adage that pescatarians maintain
a squeaky-clean diet. It comes at a price, though. Atlantic salmon is $31 while halibut comes in at $45 — though diners are spared a lonely a la carte offering.

But POB is insistent that seafood is more than just a Yankee perspective. There is ample shellfish on display in chilled cases, but the restaurant is anchored by its sushi bar — a decision that suggests any myopic fixation on fresh fish is cross-cultural. They deliver the standards (spicy tuna and California rolls) but there are $20 and up Americanized versions that manage to surprise: a surf and turf with filet mignon, and a shrimp and tuna roll punctuated by cilantro and jalapeño. 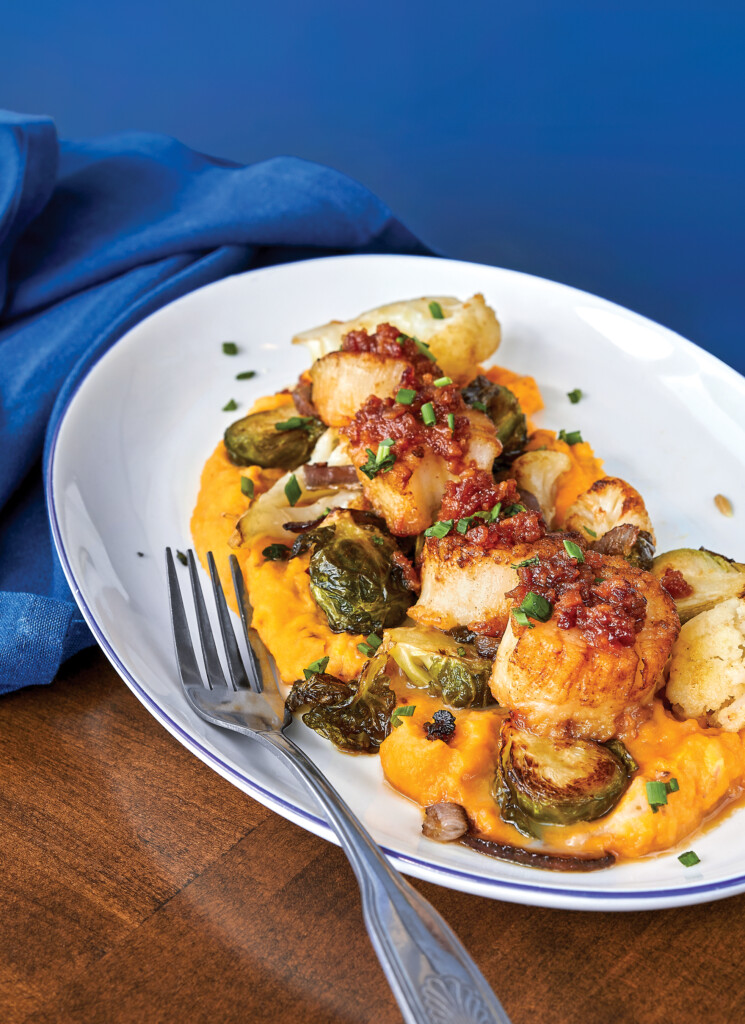 The kitchen returns often to Asian influence, however, not just with ingredients but in the minimalist approach that refuses to eclipse the fish itself. There is fried shrimp with both sticky and soy sauce ($16), as well as calamari with wasabi aioli and pickled ginger ($17). But, even fried, the kitchen remains an ocean arbitrator; batter is glassine and dishes remain light no matter how they’re cooked.

The objective here is to make seafood as accessible to the American palate as burgers, and POB does it by offering what diners want (indulgence) and what is inherent in the characteristics of fish (simplicity). The former shows up with bibs, wet-naps, crackers and a bursting stuffed lobster, drowned in butter and breadcrumbs ($60 and upward). The latter is manifested in the cod bianco ($28), a filet served in a bowl of Champagne butter sauce, accented by tomatoes and pickled onion. In an age when people are at least considering minimizing meat in their diet, these pescatarians can point to sustenance that’s as moderate or as decadent as any carnivorous option.

But, if folks remain trepidatious, POB uses brunch — the great American mainstay — to do its dirty work. You can still eat your way through a raw bar with its favorite mistress, bloody mary (bottomless for $17, so get that Uber lined up). But this is also the spot where, knee-deep in cocktails, lobster on everything seems wildly appropriate. Put it in a scramble, on an omelet ($23), or pair it with a spicy tomato hollandaise on the Benedict ($26). The workweek may be nipping at your heels, and late Sunday morning is when the kitchen will convince you that shellfish is the quickest way to repress an inevitable future.

But perhaps the most compelling part of the restaurant — as a member of a culinary coalition — is a staff that takes itself seriously and its task to heart. If this POB feels vaguely like a banquet hall, it’s simply because each corner of the room is its own experience, facilitated by the servers and uninterrupted by anyone else’s evening. The bar holds two dozen people, but even packed, it doesn’t emanate an R-rated mood. Rather, it maintains a lively energy that never escapes its perimeter as tables are set back behind wooden partitions and private rooms conduct their business behind glass. If the Providence restaurant presents itself in moody light, hushed tones and with a marginally illicit mood, East Greenwich reassures every demographic that there’s a place for them by the figurative sea. 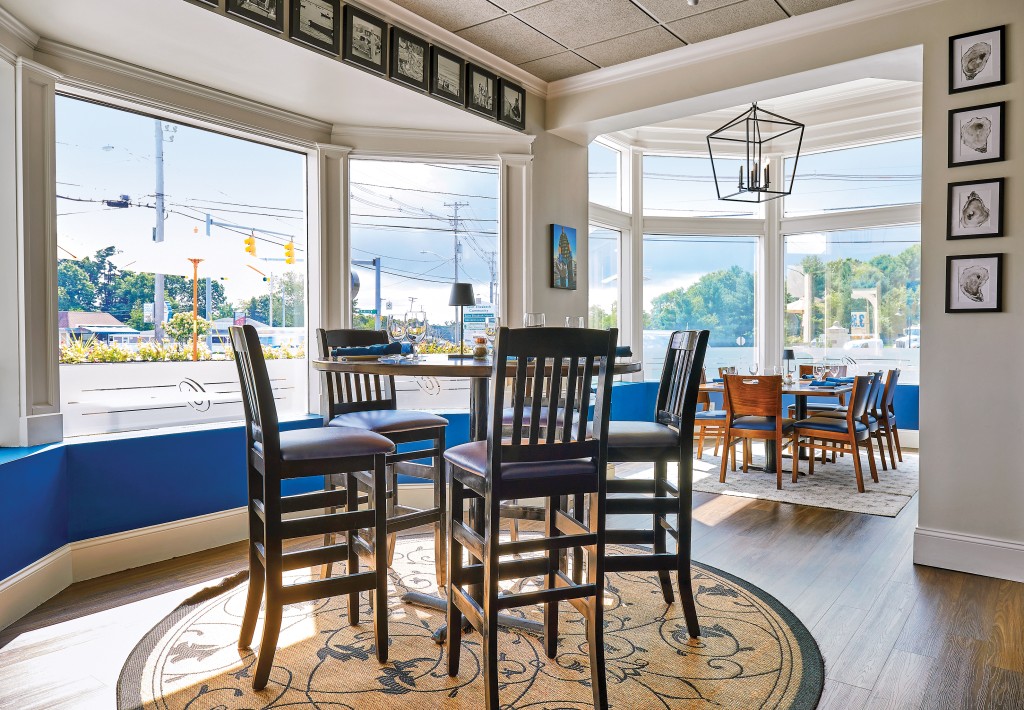 CAPACITY: More than a hundred indoors with a patio to boot.

KAREN’S PICKS: No surprise: anything that swims.