Behind the Stacks at the Providence Athenaeum

The Athenaeum is home to rare and contemporary books, a devoted membership and at least one steamy affair.

In the quiet corner where Benefit and College streets intersect sits a large, unassuming building.

An intricately carved fountain presides over the street below and several steps lead to a grand entryway of double doors set behind two tall columns. Inside, hundreds of worlds bound between covers are nestled together — a veritable galaxy of stories on dozens of bookshelves.

I am ashamed to admit that, as a resident of Rhode Island since birth, I had never stepped foot inside the Athenaeum. My first time, I enter through the back entrance. My immediate reaction? Eyes open wide and a “wow” escapes my mouth. This is how I imagine I would feel had I walked through the doors of Hogwarts in the whimsical world of Harry Potter. (The two are quite similar.) My eyes wander from the floor-to-ceiling shelves to students peering at computer screens behind desks. Large busts preside over the main floor of the library, and skylights let in copious amounts of sunshine.

Robin Wetherill, director of membership and external relations at the Athenaeum, guides me to the art room on the upper level, home of books too large for the shelves. Both executive director, Matt Burriesci, and director of collections and library services, Kate Wodehouse, join us to talk about the secrets that lie within one of Providence’s finest time capsules.

The Providence Athenaeum isn’t your typical library. While the public can visit, take part in programs and read books in the space, only members can borrow books. The current collection includes an estimated 180,000 items and comprises both contemporary and rare materials — so rare, in fact, that a separate room on the lower level houses the Athenaeum’s most prized possessions. The collection is an incredible documentation of the city’s reading taste over nearly 200 years, as members both then and now drive the library’s new acquisitions. Even today, the Athenaeum purchases books and DVDs to fulfill members’ requests.

In short: The collection has never been locked away for scholars. Rather, it has been an institution housing an edifying selection that’s open to the public. Both the current circulations and some items from the special collections are meant to be handled and read.

But how did the building get here in the first place?

When the new Greek Revival style building by architect William Strickland first opened, it was not just a space for the Athenaeum. It housed the Franklin Society, a scientific and philosophic club, as well. The club moved out only ten short years later in 1848 and its space was claimed as a reading room. Sconces, original to the building, still line the mezzanine. While the center of the building is also original, the Athenaeum has undergone quite a few changes over the years.

“There have been two expansions to the building, one in 1914 designed by local architect Norman Morrison Isham,” says Wetherill. “This gave us the space needed for the children’s section of the library. The second addition was added in 1979 by architect Warren Platner. This allowed more room for the children’s section and even some extra space for the rare book room.”

And, it’s a good thing they added more space. Last year, the library welcomed more than 55,000 visitors, 1,200 of whom have active memberships. Though this membership library is only one of seventeen in the United States, the general public can also experience the charm of the Athenaeum’s programming, too. More than 200 events — including story hour for children, a Friday night series for adults, guest speakers and more, as well as several events each year such as the refurbishing and reopening of the Richmond Fountain out front — can be enjoyed by all. Plus, the Athenaeum hosts other fun events including photo and film shoots, wine tastings and even weddings. 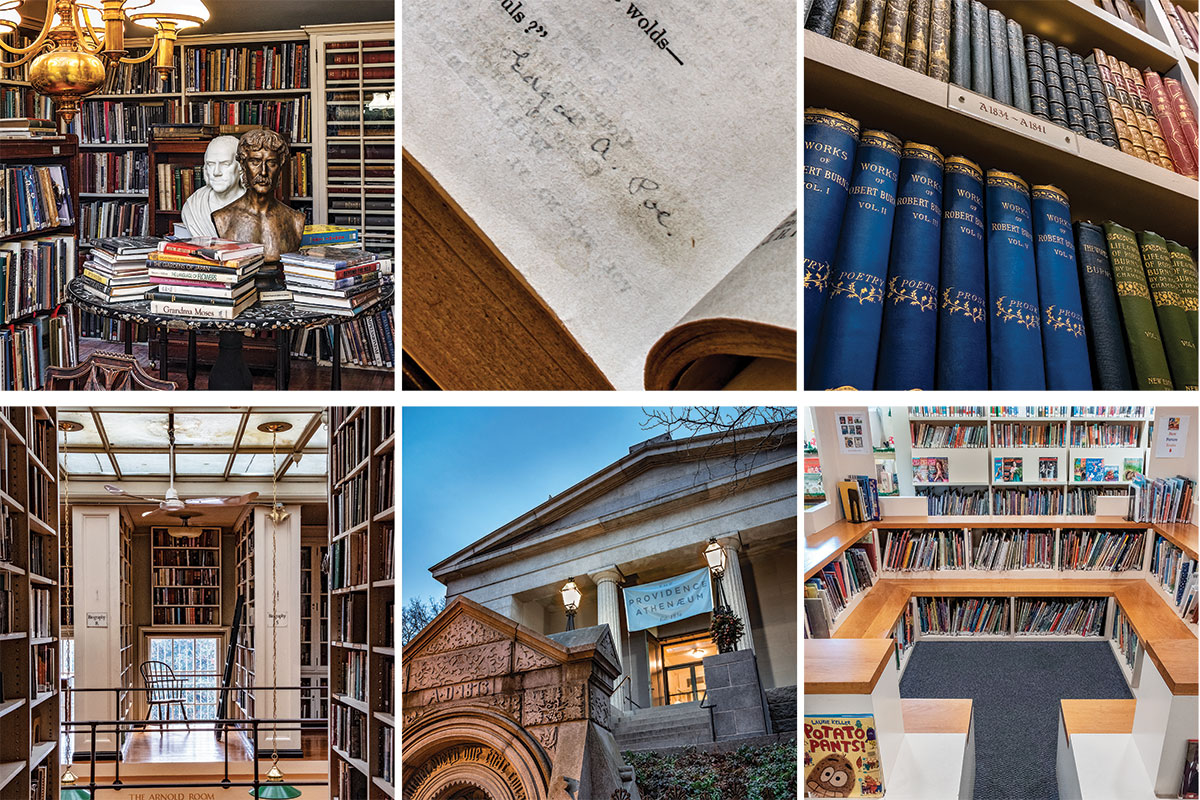 Top, left to right: Busts and statues are placed throughout the library; Edgar Allan Poe’s signature below “Ulalume”; thousands of books are found in the stacks. Bottom, left to right: The upper level features nooks for studying and reading; the facade of the Athenaeum featuring the Richmond Fountain; the children’s section of the library. Photography by Chris Vaccaro.

Both then and now, the Athenaeum has been a backdrop for intimate connections. A Providence local, H.P. Lovecraft, lived a block or so away and wrote about the Athenaeum in his fiction and correspondence. While he wasn’t a member, Lovecraft would thumb through books and return them to the stacks over and over again. He felt an affinity for the space because famous poet, Edgar Allan Poe, had been there before him.

It turns out Poe had strong connections to the Athenaeum, too. Shortly after The Raven was published, Poe, who was corresponding with Providence resident Sarah Helen Whitman, made it a point to meet her here. They began courting in the Athenaeum’s stacks and got engaged in 1848. Whitman used a share of a friend to check books out of the library and was a very active Athenaeum reader and borrower. The couple would visit quite often, so much so, that the Athenaeum even has Poe’s signature in a charging record, plus a book he took out, too.

My favorite Poe fact from this Providence gem? On one of their dates to the library, Whitman told Poe she was intrigued by a poem she had recently read called “Ulalume” in the American Whig Review. Unbeknownst to Whitman, Poe admitted to writing the poem anonymously. They found the book at the Athenaeum, Poe pulled it off the shelf and scrawled his name in pencil under the poem. The Athenaeum still holds the copy today, signature and all.

“We love that, had a librarian seen him scrawling in the books, his name might have been erased,” says Wetherill. “It is truly a layered history. I mean, if you walk through the alcoves and desks even now, you can see people leaving notes for one another. There is an incredible sense of conversation and community. When you are here, you are part of this tradition of knowledge and learning.”

This we know: the Athenaeum has offered a sense of adventure, a glimpse of beauty and novels full of history for both famous writers and Rhode Island locals alike. Then and now, the Athenaeum has served as a place to study, read a book and spend an afternoon nestled among the stacks.

If you are interested in Poe’s connection to the Athenaeum, check out the exhibit, “Ravenous: The Enduring Legacy of Poe,” on view now through the end of April. Multiple first editions of The Raven, a lock of Poe’s hair, items owned by a preeminent Poe collector and more are on display. Plus, the Audubon Society of Rhode Island will bring in a live raven for a children’s program.