The Blackstone River Valley National Historical Park and the Haus of Glitter will commemorate the country's first factory strike nearly 200 years ago with song, dance and a celebration of spring. 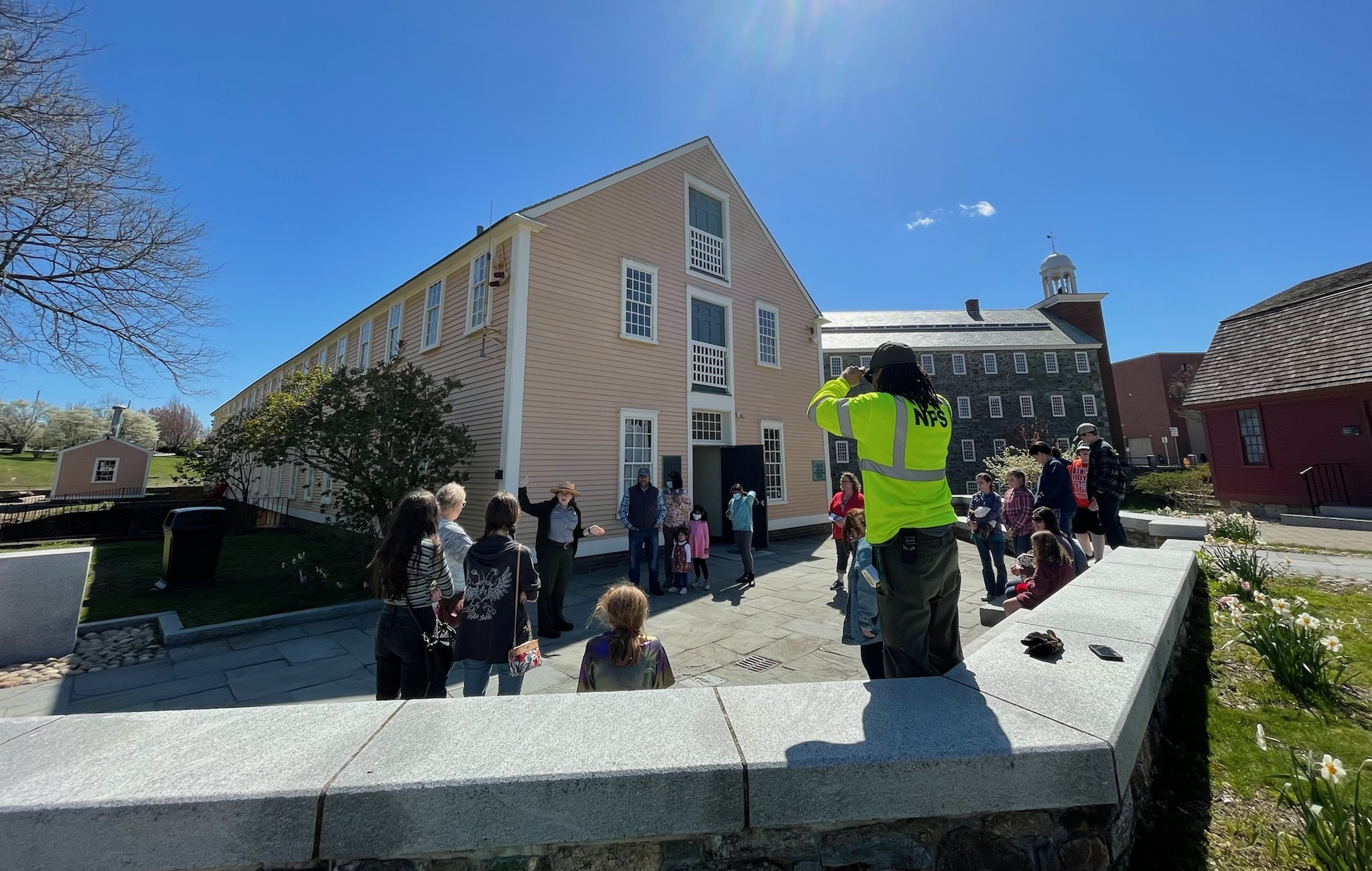 A park ranger leads a tour at Slater Mill in Pawtucket. (Courtesy of the Blackstone River Valley National Historical Park)

Nearly 200 years ago, a group of women in northern Rhode Island made history.

The mill town of Pawtucket, which had already gained a foothold in future history books as the birthplace of the American Industrial Revolution, became home to the first organized factory strike in the country’s history. In 1824, mill owners tried to extend the work day while cutting back wages, a move that was not received well by the mostly female workforce it affected.

“Most of the strikers were women, so having women take an active role in speaking up for themselves and for their own rights, that’s an interesting time. We hadn’t seen a whole lot of that coming in before,” says Kevin Klyberg, a ranger and director of interpretation and education at the Blackstone River Valley National Historical Park, which oversees Slater Mill in Pawtucket.

According to Klyberg, the strikers were not entirely successful in their demands. But the strike did have one noteworthy outcome: mill owners and workers agreed that a clock should be installed in one of the church towers overlooking the Pawtucket Falls. In a time when most people didn’t own their own clocks and the rhythms of daily life were determined by a factory bell, having an independent marker of time was an important protection for workers.

“Like so many of these things, nobody got exactly what they wanted,” he adds. “But I think, for example, this notion of having the time measured fairly, that was a big change. That definitely was a win.”

On Saturday, May 21, the Blackstone River Valley National Historical Park and the Haus of Glitter will commemorate the event during the First Strike Festival at Slater Mill. The event, which also serves as a celebration of spring, will feature dancing, singing, storytelling and a nod to the struggle for labor rights of past years.

Among those scheduled to perform are the Mystic Garland Dancers, Capeverdean American Community Development, Mark Cutler, the Rhode Island Black Storytellers, the Eastern Medicine Singers and Jay Brunelle. The event will also include free tours of Slater Mill and family-friendly activities from the Rhode Island Master Gardeners, Metamorphosis Dance Company, Rhode Island Spinners Guild and others.

“It’s just a chance to look at what’s going on around the modern Pawtucket city and a look at things that were going on 200 years ago. It’s a little mix of art and a little mix of history as well,” Klyberg says.

The Haus of Glitter is a dance company and arts group based in Providence whose efforts including preserving underrepresented history and promoting community healing through art. Since January of 2020, the group has operated out of the former home of Esek Hopkins, a slave ship captain and Revolutionary War commander whose role and legacy they’ve reimagined through their performances.

Klyberg says the partnership has helped connect Slater Mill’s history with what’s going on in the community today.

“We’re really trying to change how we view Slater Mill,” he says. “There’s still the building itself that is so important and the machines and the story, but [we’re] really highlighting the people and how the changes that took place in the building weren’t just one little yellow mill on the banks of the Blackstone in Pawtucket.”

For those who can’t attend this weekend, the Blackstone River Valley National Historical Park will host a series of events over the summer celebrating the history of the mill and other sites throughout the region. These include the popular Walkabout series, returning this year after a two-year hiatus due to the pandemic.

Those interested in strike history, he says, will enjoy the Saylesville Walkabout in Moshassuck Cemetery on June 16. In 1934, a massive factory strike culminated in a violent confrontation between striking workers and the Rhode Island National Guard — remnants of which can still be found in the bullet holes in cemetery gravestones today.

Other Walkabouts planned in Rhode Island are listed below. All walks are led by a park ranger and begin at 6:30 p.m. on Thursday evenings.

More information about upcoming events and activities in the Blackstone River Valley National Historical Park is available on the website here.

Al Fresco Dining Coming Back to Federal Hill this Weekend