After facing some setbacks, the food business is serving up even more birria tacos and consommé at local events in Rhode Island. 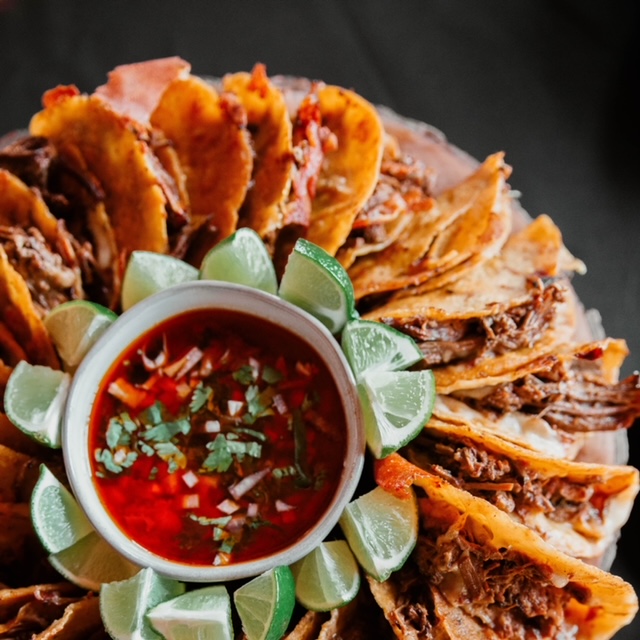 Starting a food business is not for the faint of heart or timid of soul. It’s not for the lazy. Nor is it for those who want to get rich quick. But it is for the daring and passionate. Like several small food businesses that started out during the pandemic in Rhode Island, chefs Jonathon Kirk and Chris Caldarone were laid off from hospitality jobs and originally launched their taco business Masa Taqueria out of Kirk’s apartment.

They gained a cult following through social media, but word traveled so fast about their takeout birria tacos served with consommé that it became tough to keep up and keep track of exactly who was ordering their food. Kirk says he got kicked out of his apartment for operating the business illegally out of his residence and then scrambled to figure out where to go from there.

“We did two events out of my house before quickly realizing it was too popular to continue,” Kirk says.

Then they connected with Owen Doyle of Gastros Craft Meats to rent out his kitchen for prep and storage, but they still needed more time and space. With hourly rates, Hope and Main was out of their reach since their birria and corn tortilla-making techniques often take more than sixteen to twenty hours to produce. Luckily, another food business, Ming’s Asian Street Food, was moving out of their subleased space at Chi Kitchen for bigger digs, leaving a vacancy in the commercial kitchen inside the Lorraine Mills in Pawtucket.

They were approached to rent the space, and Kirk and Caldarone moved fast to secure a lease for the commercial kitchen with Chi Kitchen’s founder Minnie Luong. Kirk also chose to rent an apartment in the same building as the business. “It sucks that I live upstairs because now I just can’t get away from it,” he says with a laugh, which might be a good thing now since he’s working more than ninety hours a week.

Founders of Masa Taqueria, Caldarone and Kirk met at the Salted Slate on the East Side of Providence and also worked together at the now-closed Sarto. They teamed up to launch Masa Taqueria because they both have a love for Latin food. Caldarone is half Guatemalan and Italian, but he grew up in Silver Lake not knowing much about his Latin heritage. He only recently met his dad a few years ago. He unintentionally sought out his own culture through other immigrant chefs that he worked with in restaurant kitchens.

“I lived in Providence my whole life. There’s a bodega on every corner, and I grew up eating $5 plates all the time,” Caldarone says. “We love Latin food so much. I didn’t even know my Latin side of my family for quite some time, but I was introduced to so much culture in the restaurant industry that it opened my eyes to what that was. It was cool to touch food that way.”

“It was amazing to see all these cultures have food in common and a passion to share that with others,” he adds in an Instagram post. “This is what led me to open Masa, why I focus so much on the corn, and by building a foundation based around my roots. Not having my father growing up really put a dent on experiencing those important details of culture, so I searched for them in food.”

Caldarone began experimenting with Latin ingredients and foods over the years at various jobs, and found a love for making tacos. Likewise, Kirk, who is Irish, learned so much from other cooks he befriended in restaurant kitchens. Team members came from Guatemala, El Salvador and Mexico. He even learned to speak Spanish from some of his friends, he says.

“We like to say he’s an honorary Latino,” says Caldarone.

Both of the chefs say they grew up young and found friends who are like family through working in the industry. Restaurant work paid their bills.

“I lived in the projects. I was a bad kid because that’s what I was introduced to. I dropped out of school and got my GED. I made wrong decisions early on. It took me so long to be able to express myself,” Caldarone says. “I took forever to care about what I was going to be because I was honestly leading a lifestyle of violence, gangs and drugs. I eventually moved away from that by getting my first job in a restaurant.”

Caldarone’s first job was as a dishwasher at age fifteen at Edgewood Cafe in Cranston, where he eventually moved up to cooking. He also learned culinary skills at Ocean Tides high school culinary program. His mother, Jeannette Caldarone, also made a living in restaurants, including Haven Hill in Cranston. Now she works at Masa Taqueria doing whatever is needed in the kitchen alongside her son. “She respects the chef lifestyle,” Caldarone says, adding that they have three other employees and that both he and Kirk’s girlfriends are investors in the business. “Obviously I’m her son, but she respects me, so if I’m like, ‘mom, cut these onions,’ she does it quick.”

Kirk hasn’t seen his mother since he was a toddler, and he doesn’t really keep in touch with his dad. When he was a teen living in New York’s Hudson Valley, he also struggled through vocational high school, only tolerating the culinary classes. He couldn’t wait to be independent, worked in restaurant kitchens in New York City, and then came to culinary school at Johnson and Wales University in Providence. He lasted a year and a half there and decided he was learning more working in restaurants, so he dropped out.

Kirk says it was people like Jonathan Beres, current owner of Tilly’s, who he worked with at the former Lola’s Cantina at the time, and Ben Lloyd at the Salted Slate, as well as cooks at Diego’s, who were willing to truly teach him the techniques it takes to be a trained chef. He’s thankful for that culinary experience for teaching him what it takes to run his own business with Caldarone for Masa Taqueria.

The partners learned about tortilla making from cooks they worked with from all different Latin backgrounds in restaurant kitchens as well as by doing their own research. “Everyone has different advice to offer. They are slightly different, but they are all using one same ingredient: corn,” Kirk says. “It’s such a staple in Latin and South American cuisine. We decided if we were going to open a taqueria we should focus on the most important ingredient and that’s tortillas.”

It’s all about the non-GMO heirloom corn and proper imported Mexican equipment for the tortillas. Caldarone and Kirk order maiz conico amarillo from ethically sourced heirloom corn distributor Masienda, then they nixtamalize it themselves. Masienda imports corn from small batch traditional farms in Oaxaca and other regions. The process starts by washing the corn, boiling it in water with calcium hydroxide to change the pH level in the water, which deteriorates the skins of the corn while it soaks. The whole process takes sixteen to twenty hours. Then they remove the shells, wash the corn again and then grind the corn with an imported Mexican molino. 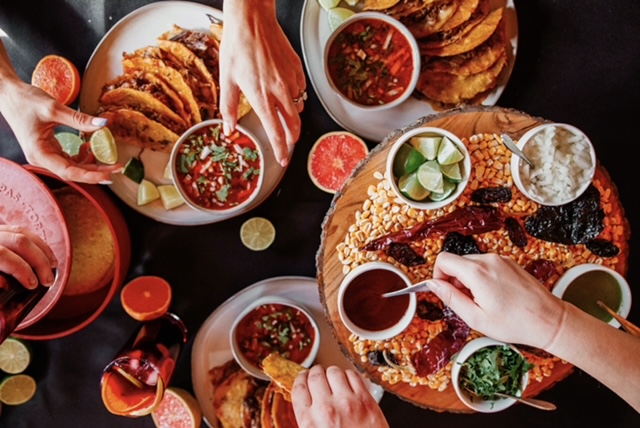 “Molino refers to the volcanic stone that is used to grind the corn,” Caldarone says. “These are volcanic stones so they are porous and create a finer texture than a traditional mill would for flour.”

The ground corn is then mixed with water and salt, and sometimes fat, to create the masa dough that is formed and pressed on tortilla presses that are also imported from Oaxaca, Mexico.

The birria and consommé also require slow cooking processes. Beef marinates in salsa roja with seven to eight different peppers. “We use a variety of chilies from Turkish and African to Mexican,” Kirk says. “We are traditionally untraditional and we try to pay our respects to tradition as much as possible without disrespecting an ingredient.” While the beef marinates, they build a beef stock with a spice blend and then cook the birria in that for six to eight hours. The stock is strained and clarified and becomes the consommé served on the side. The consommé is meant to be sipped like a broth, they say, but some people dip the tacos in it.

However people decide to eat their food, it’s clear a lot of thought and time goes into everything at Masa Taqueria.

“Just like the tortillas, if we are going to go that hard for something and wait eighteen hours, we may as well go all in,” Caldarone says.

Find Masa Taqueria on Wednesdays with the Trap Box on the Pedestrian Bridge in Providence (4-8:30 p.m.); Thursdays at Rock and Rye, (6 p.m. till late); and Saturdays at the Point Tavern in Providence from 5-10 p.m., plus weekly changing events. Follow them on Instagram for their full schedule at instagram.com/masataqueriapvd. 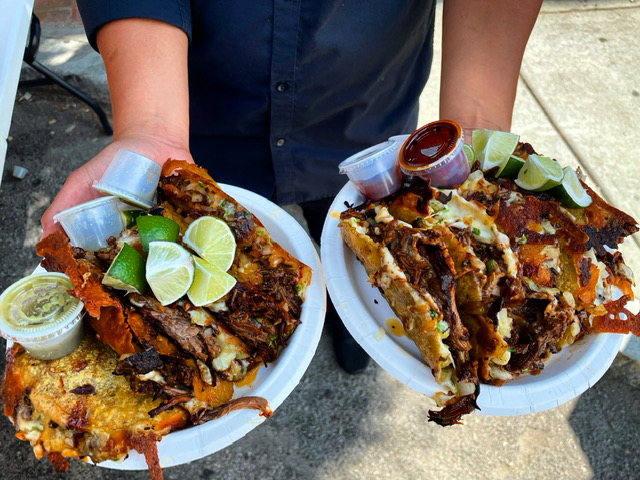