Does Maria Rivera Have What It Takes to Move the Comeback City Forward?

Inside the life and work of Central Falls' first female mayor, a tough, ambitious Latina on a meteoric political rise. 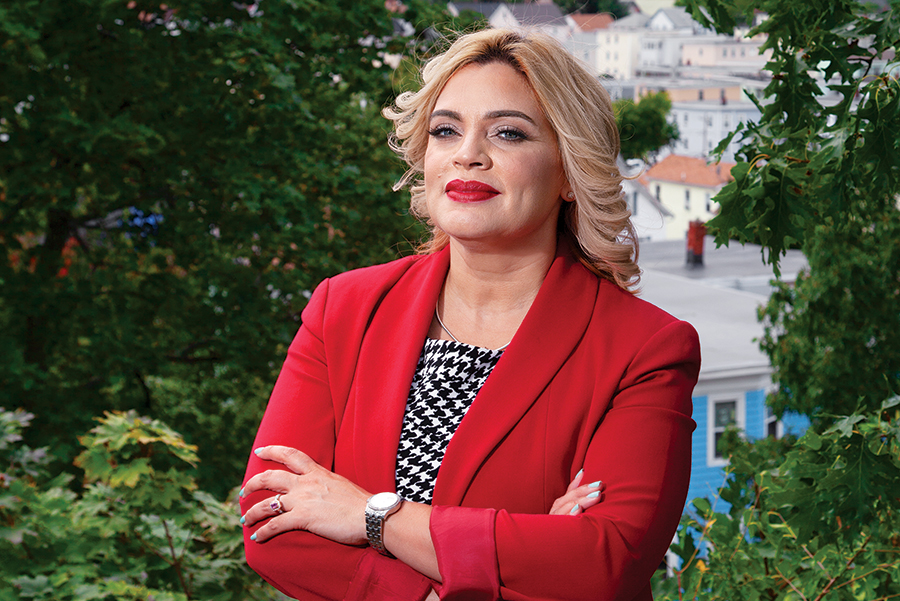 Seven women, masked and on a mission in business casual attire, pause to peer through the gaps in a tall chain link fence along Phillips Street in Central Falls. One by one, they erupt in laughter, pointing at a closely cropped cutout of a woman’s head taped to the door of a yellow shed.

“It’s my face,” says Maria Rivera, mayor of the city. She smiles, exhales and rounds the corner of the block. Such scenes might be unsettling if they weren’t so common; these days, Rivera sees herself everywhere, from residential homes to restaurant windows. 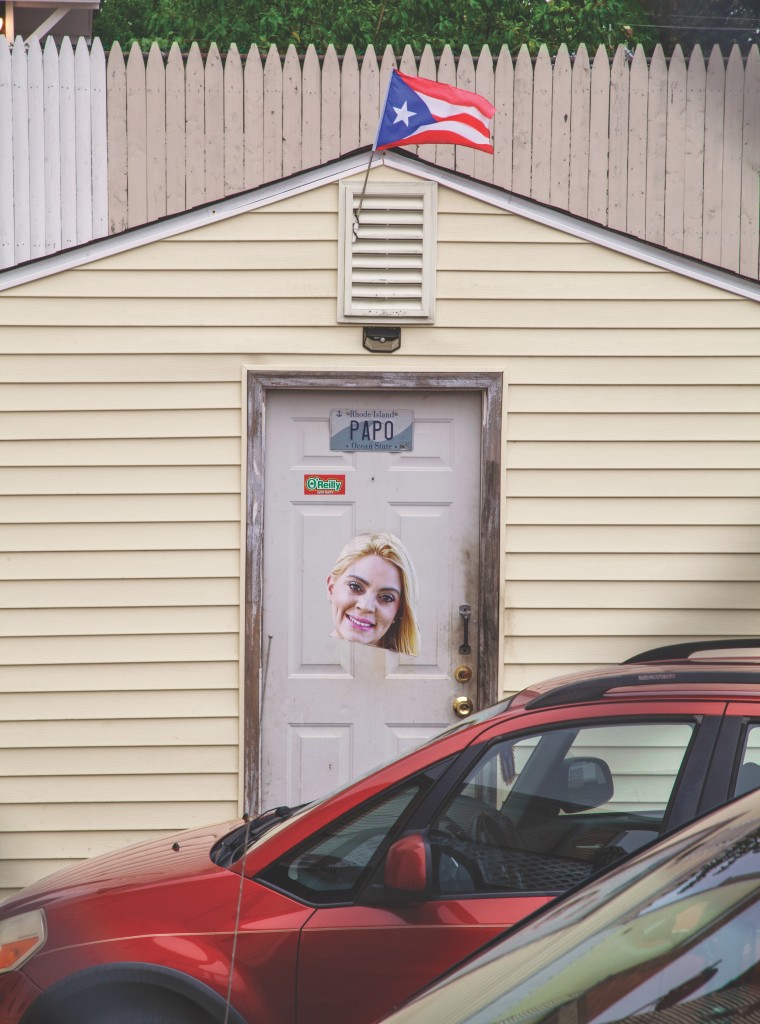 The group passes in front of the house, a tidy single family with coordinating yellow vinyl. In the shadow of a small shrub, a frog figurine holds a sign offering free kisses. An older gentleman emerges from the front storm door with a piece of mail.

“My daughter! I love you!” he shouts across the lawn in accented English. He approaches Rivera, tucks her into a warm hug and hands her the envelope. It’s an invitation to a retirement party. Rivera accepts it, smooths her tight blond ponytail and, with a gracious exit, continues walking to her destination. She gets but four paces along the empty neighborhood street before another resident, at an intersection a block back, leans out of his car window and yells, “Hey Maria, did you look into that?”

Rivera gives a half-hearted “Yeah,” with a wave of her hand. Someone in the group tells her she needs a bodyguard.

The attention, which borders celebrity, is part and parcel of being Maria Rivera, a much-celebrated civil servant in this tight-knit majority-minority community of 20,000 residents. Last November, Rivera was elected as the city’s first female mayor and, two glass ceilings in one, she became the state’s first Latina mayor, too.

On this humid summer day, Rivera and the group — various members of the Central Falls school district — are hand-delivering backpacks and materials to kids returning to in-person instruction after eighteen months of distance learning. The women arrive at an apartment building on King Street, the home of two elementary-age children and a high schooler, and pack into the family’s kitchen, where the night’s dinner cools under foil and a telenovela plays in the background. The youngest boys stand by the sink with their mom, eyeing the blue backpacks.

“Jason, esta es tu mochila,” says Maria Pedraza, who works as the district’s truancy officer. “Can I open it? Is that okay? It’s yours, I just want to show you something, okay? Gracias!”

As Pedraza digs through the backpack, pulling out forms and flyers and explaining the district’s policy on universal masking, Rivera stands behind an oval dining table covered in a lace tablecloth and a striped runner. A plastic pitcher filled with agua de Jamaica, a sweetened hibiscus tea, rests next to a stack of blue cups and a bowlful of fresh fruit. Rivera doesn’t interject in the conversation, which includes scheduling another home visit to set up the eleventh-grader’s Skyward account, but every so often she waves to the dark-haired boys, one in light-up sneakers and the other in Spider Man slip-ons.

When the conversation winds down, their mother offers the group some iced tea. Rivera is the first to accept, and she urges others to take some, too. The women then head outside for a group photo. The little boys stand off to the side but Rivera gives them a quick, “Venga,” come over, and they clasp hands with their mayor for a picture, too.

They might not have known her before, but now, on a shed around the corner and throughout their home city, they’ll recognize the woman who held their hands as they prepared to return to school — and, if she has it her way, leads them toward a brighter future, too.

Rivera, forty-four, never intended to get into politics. Her mother, who left school by the eighth grade, only asked that her five daughters earn their high school diplomas. The middle child, Rivera credits her stepfather for teaching her to aspire to more.

“He was the only person who never judged me,” says Rivera, stifling tears. “Even something as simple as driving. My mom didn’t want me to drive. I’ll never forget the day he said to me, ‘Just take the car. Don’t tell your mom.’ ”

He died in 2013, before she entered public service, but she keeps his portrait on a wall overlooking her desk in city hall.

Rivera was born in New Jersey and spent the first eleven years of her life in Chicago. Raised in a Spanish-speaking household, Rivera was enrolled in English language classes when she started school. But 1980s Chicago was a violent place, so the family followed a relative to Rhode Island “more for safety reasons,” she says. “It’s a huge difference from where we lived.”

“We were just two little girls living in the same community,” says Rodriguez, who served as an investigator for the parole board before Rivera tapped her as Central Falls’ city clerk. “We just clicked, but we’re opposites. I was that young girl who was impulsive and could say, ‘I don’t want to go to school today,’ and she would be like, ‘No, we’re going to school.’ She was driven and I was, too, but not to the extent she was. That’s why she’s mayor.”

Rodriguez remembers when the state assumed control of Central Falls schools in 1992, the first district-requested takeover in the nation. She was a sophomore, and it was a long year of cold lunches and winter coats in class.

“What a challenge,” Rodriguez says. “I remember feeling alone and the uncertainty over what was happening.”

That year, Rivera’s family moved to Puerto Rico to help care for an ill family member. There, she continued high school and got her first taste of the electoral process.

“My stepfather loved politics and he loved elections in Puerto Rico,” remembers Rivera, who says she was drawn to the celebrations. “I would go with him every time there was an election, just to support the candidate that he was supporting.”

But after three years in Puerto Rico, the family returned to Central Falls, where Rivera reunited with Rodriguez and finished high school. Unsure of what to do next, she split her time between Sunshine Market in Central Falls, CVS Pharmacy and the Christmas Tree Shop.

“There was no one who was telling me to go to college, but after working three jobs that first year, I needed to get myself in school,” Rivera says.

She enrolled at the Community College of Rhode Island and worked at the same time, eventually earning an associate’s degree with a concentration in legal administrative assistance. After graduation, she worked for a spell at a bank, then landed a job in outreach for the state-run Higher Education Assistance Authority. She started a family with her then-husband — most of her wedding decorations came courtesy of her Christmas Tree Shop discount — and raised a boy and a girl in a multifamily they bought in 2003, where Rivera still lives with her kids and her mother.

In 2004, she moved on to the state Department of Human Services as an eligibility technician connecting vulnerable Rhode Islanders with social services, including the Supplemental Nutrition Assistance Program. She says she enjoyed helping others and wanted to find a way to do it on a broader scale. So, in 2014, she signed up for the Rhode Island Latina Leadership Institute (LLI), a nine-month leadership incubator supported by the Rhode Island Latino Civic Fund. Zuleyma Gomez met Rivera through LLI, where they served in the same cohort.

“She was kind of quiet and reserved and finding her voice at the time,” says Gomez, who now serves as the mayor’s chief of staff.

Gomez, who also grew up in Central Falls and worked for former Central Falls Mayor James Diossa and Secretary of State Nellie Gorbea, remembers watching Rivera break out of her shell over the course of the program, eventually serving as a fundraiser master of ceremonies.

“She did a phenomenal job,” says Gomez. “She was a great speaker.”

Almost immediately, Rivera says, her contacts in Central Falls began asking her to run for public office in the city, which had weathered a federal fraud scandal involving its former mayor, Charles Moreau, and was clawing its way out of bankruptcy under the leadership of Diossa, the youngest mayor in the state’s history.

“I kept saying I’m not ready,” says Rivera. “The response was always: You’re never going to be ready. You just have to do it.”

In 2016, she launched her bid for city councilor at large. Amid the campaign — one she couldn’t lose; she and another candidate were running for two vacant seats — the working single mom of two teenagers also re-enrolled in college at Roger Williams University. She’d earn her degree in public administration three years later.

Remembering those first days on the council, Rivera says, “I was freaking out. I took those first two years just to listen and understand what being on the council was about, understand the budget process and just take it all in. But at the same time, I continued to stay really engaged out in the community.”

Her focus at the outset, she says, was quality of life for the residents of Central Falls. She says she relied on her constituents to convey the city’s greatest needs — affordable housing, a new high school — and, by 2019, her reputation earned her the president’s seat on city council. But sometimes she had to take positions on contentious subjects, and her opinions haven’t always been popular.