Peek inside the cast preparations for Les Misérables, playing at PPAC through Nov. 20. 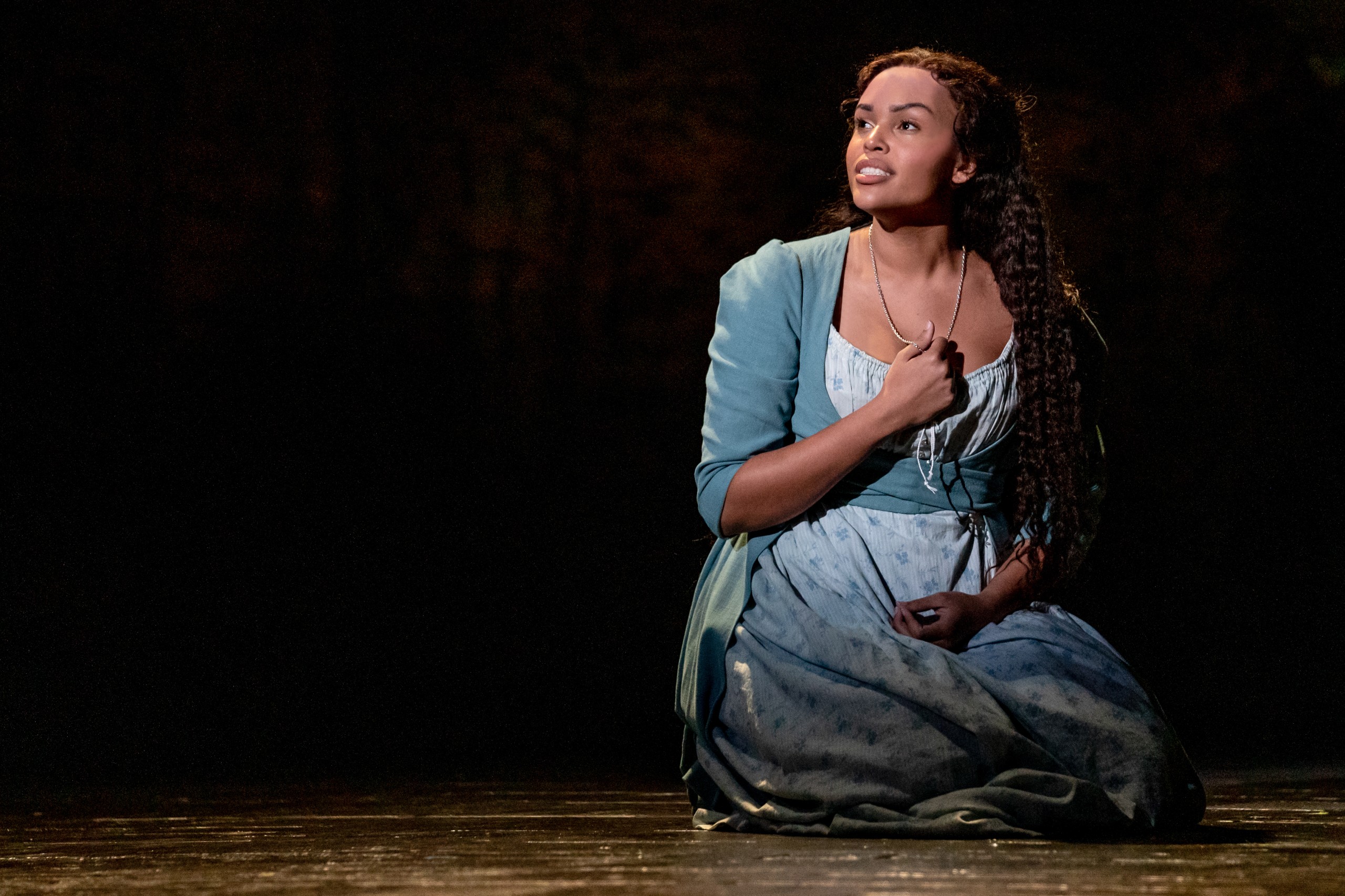 Haley Dortch as Fantine in Les Misérables. (Photo by Matthew Murphy and Evan Zimmerman for MurphyMade)

Les Misérables is a case study in endurance.

It’s not just that the award-winning musical, based on the classic novel by Victor Hugo, has been in continuous run since 1985, when the English language version first premiered in London’s West End.

But the show’s three-hour run time, every minute packed with show-stopping ensemble numbers and solos that regularly draw tears from the audience, makes each performance a physical and emotional feat for the actors who bring it to life eight times per week.

No one knows that better than Haley Dortch, who until recently was a student at the University of Michigan. The twenty-year-old Dortch is making her touring debut as Fantine after finishing her sophomore year.

“I found that in doing a tour, you can’t eat ramen noodles every night,” she says. “You cannot do that in order to sustain yourself. To do this eight times a week and be at your optimal health and optimal performance, you have to eat right. I had to start doing cardio because the stamina of the show is intense, and it’s a very different caliber than everything I’ve ever done before.”

Along with cardio, Dortch says she had to incorporate stretching and cross-training into her routine to prepare for the physical demands of the role. The show includes plenty of opportunities for cast members to show off their physical acting skills, as characters frequently get into altercations onstage. 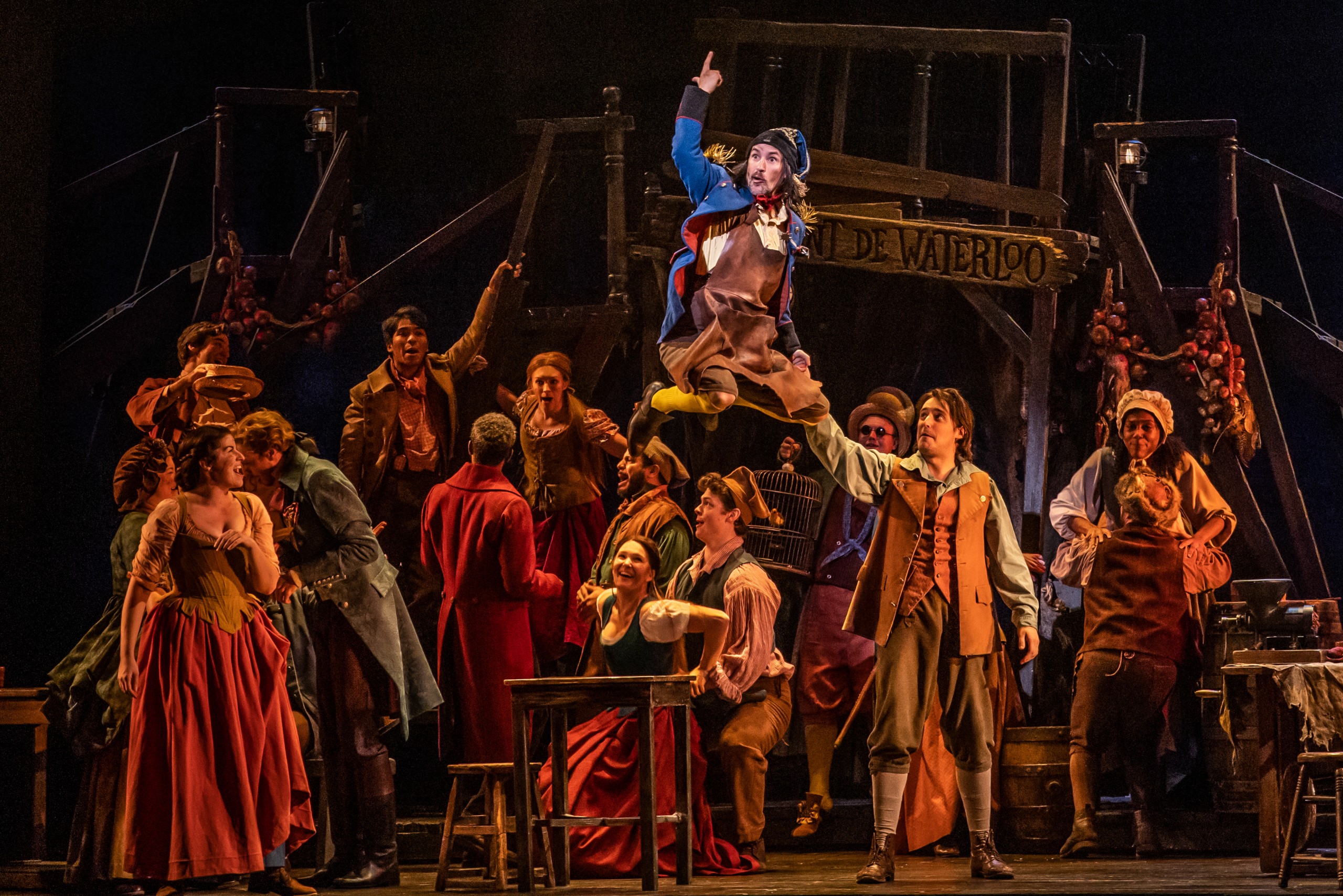 Matt Crowle performs as Thénardier in “Master of the House” from Les Misérables. (Photo by Matthew Murphy and Evan Zimmerman for MurphyMade)

For those new to the world of Les Misérables, a brief primer: The show follows Jean Valjean, a poor Frenchman imprisoned before the start of the story for stealing a loaf of bread. When Valjean is released and breaks his parole, a relentless policeman named Javert makes it his life’s mission to track down the harmless lawbreaker and return him to prison. The rest of the story unfolds in twenty years of sweeping French history, incorporating a revolution, a passionate love story and lots of misery (the show’s title means “the Miserable Ones”) as everyday people try to make their way in a squalid, unequal France. It’s an epic tale, one that has endured because of its ability to tap into the emotions and concerns of each new generation.

Dortch is not the only actor who followed a strict routine to prepare for the high-energy show. Matt Crowle, who plays the swindler and audience favorite Thénardier, says he had only seen Les Misérables once before getting the part. To prepare, he turned to the original novel, where he found words like “rickety,” “puny” and “angular” to describe his character.

“When I read that, I was just coming out of some very horrible eating habits from the pandemic,” he says. “I took that as an opportunity to go on my Thénardier diet because I really wanted to find that sort of rickety, hollowed-out aspect. For me, it was a fun, physical challenge of finding the physical expression of Hugo’s original writing.”

Addie Morales, who performs as Valjean’s adopted daughter, Cosette, also returned to the original text to find inspiration for her role.

“There’s so much more that is not said that is in the book, and for me, a lot of what informed my version is the history and relationship between mother and daughter, Fantine and Cosette, that you touch on and you know and you see in the show, but unless the actor brings the underlying story to your character, you can easily miss it,” she says.

Like Dortch, Morales is making her touring debut in this production. The two actresses say life on the road is an adjustment, with the cast and crew packing up and moving to a new location every week.

“Constantly moving and packing up your life and having it all with you at once is a very unique experience, but it’s absolutely thrilling and easy to do if you have a good group of people around you,” Morales says. 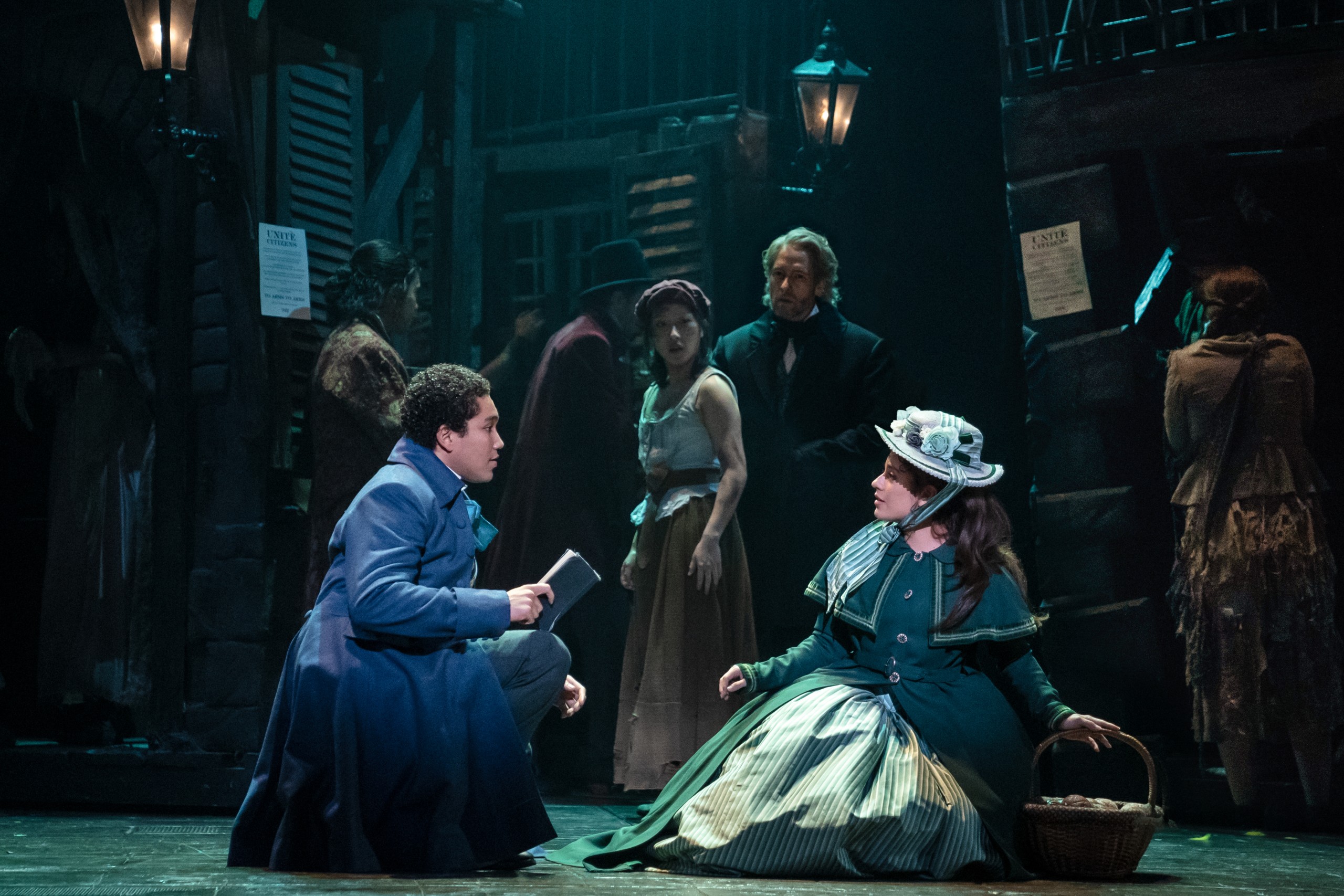 Gregory Lee Rodriguez as Marius and Addie Morales as Cosette in Les Misérables, with Christine Heesun Hwang as Éponine and Nick Cartell as Jean Valjean in the background. (Photo by Matthew Murphy and Evan Zimmerman for MurphyMade)

So what’s the best part of performing in Les Misérables?

“It’s the stories of people who relate to the show so much and it means so much to them,” Dortch says. “That really keeps me going and being able to tell [the story] each performance. God bless social media, because people are able to reach out in a more accessible way.”

She recounts the story of one fan who found her after a performance to tell her “I Dreamed a Dream,” her character’s signature song, was the last song they sang to their grandfather before he died.

For Crowle, the most rewarding aspect is how everyone, audience and cast, finds new life in the show every night.

“That’s a huge testament to the writing, of course, but I also think it’s a huge testament to the cast,” he says. “There’s a remarkable amount of talent on that stage, and to see a group this large sort of plunge in eight times a week and treat it as though it is the first time we’ve done it, it’s wildly inspiring. That’s not always the case in some shows that you do over the course of your career.”