Kingfisher is a New Vermont Restaurant with Providence Roots

The former Red Fez restaurant owners and two former north cooks have partnered up to run an eclectic restaurant in downtown Ludlow. 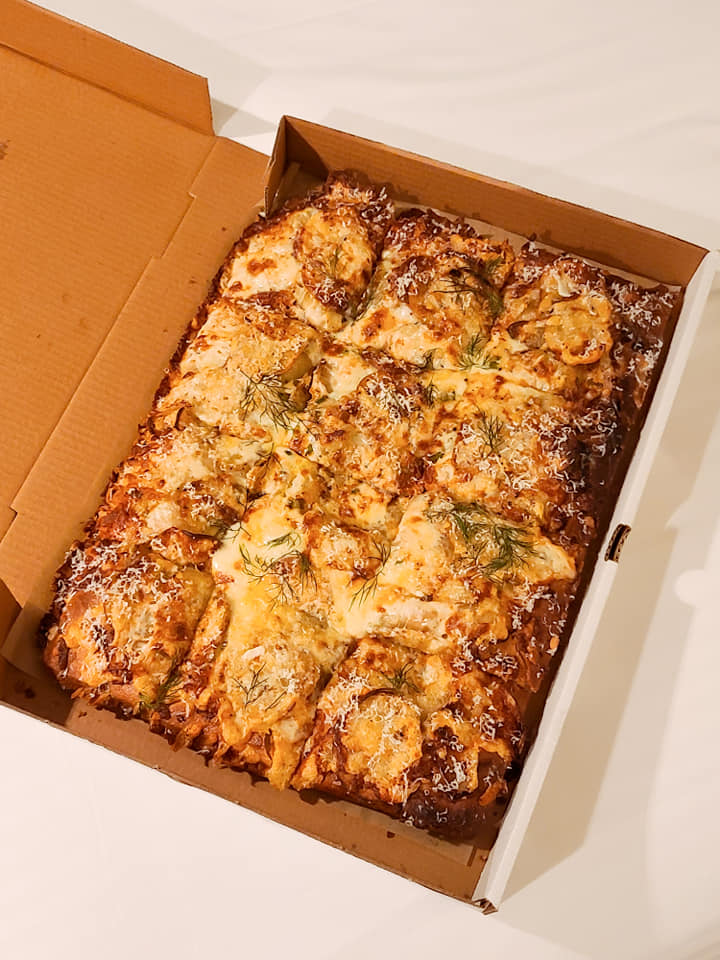 The fontina, potato and fresh rosemary pizza from Kingfisher.

If you can sneak up to Vermont (score a negative a Covid test and quarantine for seven days, do not pass go and do not collect $200), then a visit to the new Kingfisher restaurant with ties to Rhode Island in downtown Ludlow is a worthy reward for the hard work it took to get you there. But even if travel restrictions don’t allow Rhode Islanders to make it up to Vermont, you can still gain some street cred just for knowing about Kingfisher for when times are better (see official Vermont cross state travel guidelines here).

Kingfisher, located near the base of Okemo Mountain, is currently a takeout-only eclectic restaurant serving a variety of freestyle food from pierogis to inventive vegetable and meat dishes, crispy square pizzas and provisions. It just opened in September with a group of Providence transplants at the helm. Thee former Red Fez owners Ed Reposa and Sara Kilguss own the eatery with Vermont native Tim Shulga, who also worked at the Fez and is best known for starting north at the first Luongo Square location alongside James Mark and John Toon Chester. They are joined by a fourth owner, Cleveland native Mike Lawyer, who previously served as sous chef at Lola for celebrity chef and “Iron Chef America” TV personality Michael Symon and spent time at the Willows Inn. He also worked as a chef at north in its early days with Shulga. Kingfisher has intentions of opening as a full-service restaurant and bar in the future, once it’s safe to do so. 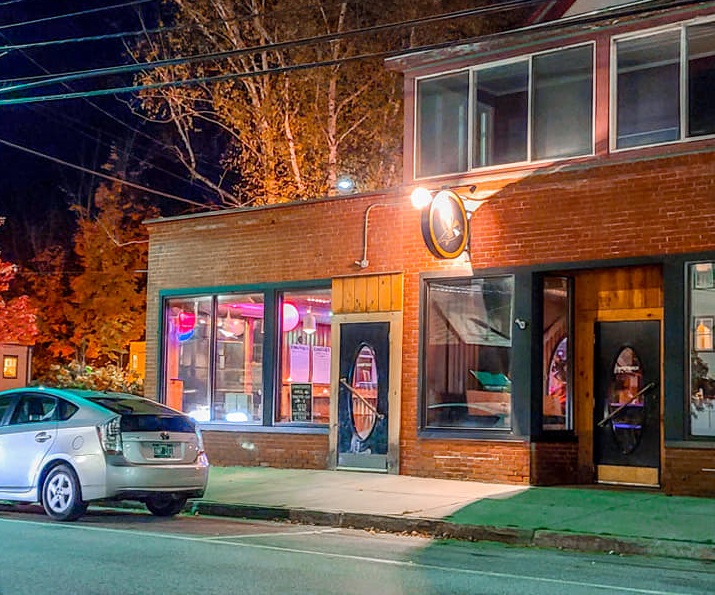 Husband and wife team Reposa and Kilguss first owned the well-known “Parking Lot District” Red Fez in 2001 and moved to Vermont in 2012. Word on the street is that the Fez, which closed in March of last year, was recently purchased and will be named Red Door Whiskey Bar in the future. The couple has also operated a wood-fired mobile pizza truck, La Pizza Lupo, since 2016. Shulga and Lawyer worked stints for the mobile pizza business over the years, and they also teamed up together to launch what was Kingfisher catering out of Rhode Island for a short time back in 2017.

The Ludlow Kingfisher has a few notable Rhody tie-ins; namely that all the partners spent lots of time running restaurants in Providence (most recently Shulga was at Oberlin). There’s an old Fez relic you might recognize on prominent display in the front room; the taxidermy elk head was once mounted on the iconic Providence restaurant’s walls. Familiar cocktails might pop up from time to time on the takeout drink list, too, like the Gingered Gent made with Jameson’s whiskey, ginger syrup, fresh lime juice and soda water.

The Kingfisher team procures ingredients from area farms, and the menu is constantly evolving and changes weekly with creative dishes that combine unusual flavors. But it always has several specialty pizzas on it.

“We aren’t really a pizza restaurant for sure yet,” Shulga says with a laugh. “It’s a bonus.”

The square pies have focaccia-like airy crust and the kind of corner pieces you’d fight over for their crisp, melted cheese-covered edges. They use some Vermont-sourced cheeses on the twenty-four-hour-proofed dough and they have been known to mix up the pizza toppings with weird combos. Try the blue cheese with delicata squash and kale that mesh well together, or the excellent frico-like fontina, thinly sliced potato and fresh rosemary version. There’s also plain cheese and the Spicy Pep-Pep, which combines Singleton’s General Store‘s smoked pepperoni (a must-visit to stock up on sausage and bacon) with hot peppers, cheese and tomato sauce. 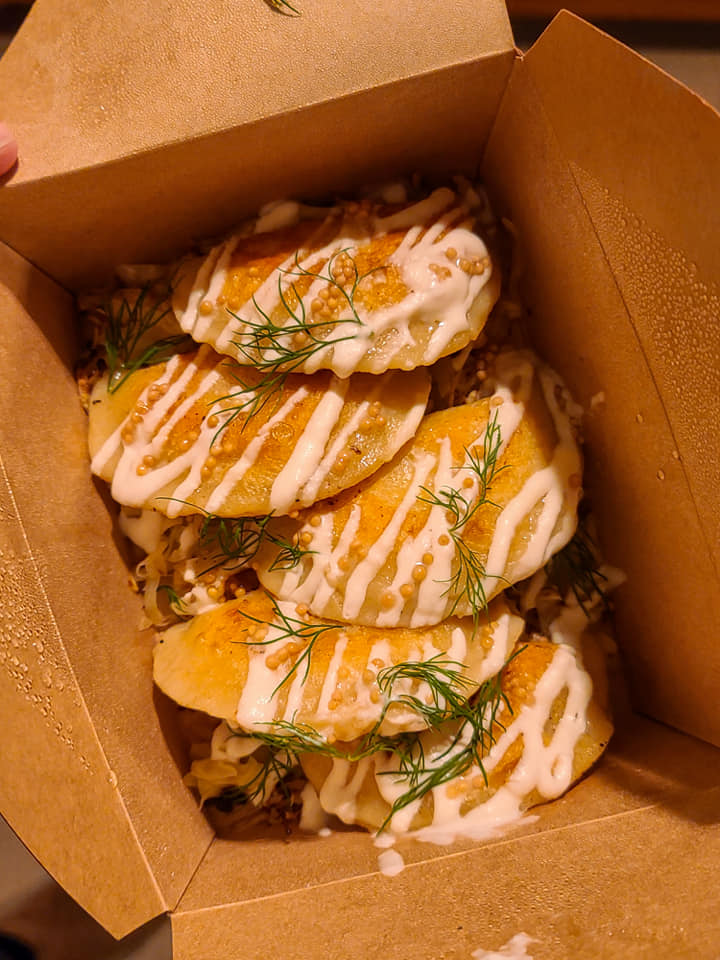 The starters deserve a shining spotlight, too. Occasionally, they include pierogis stuffed with potato and bacon or Siberian dumplings called pelmeni, which always sell out quickly.

There are inventive vegetable dishes like carrots and cauliflower sometimes slow-roasted with honey and pepitas or garlic oil, tahini and gochugaru (which totally remind me of the early days at north), as well as grilled beets with raclette fondue, sesame crisps and tamarind dressing. They are also selling made-in-house provisions like hummus, naturally fermented kimchi, sauerkraut and take-and-bake pizzas. On late Sunday mornings, you might nab some fresh-out-of-the-fryer five-spice apple cider doughnuts, $5 Sicilian pizza slices, noodle bowls and sandwiches. 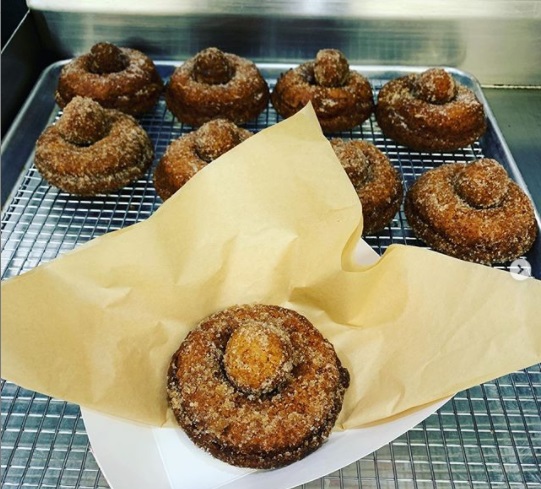 If you’re lucky enough to hit the Vermont slopes this coming ski and snowboard season, you’ll probably want to grab some takeout from Kingfisher since we hear lodges will be closed for the winter due to the pandemic. They are currently open Thursday through Saturday evenings, and Sundays 11 a.m.-2 p.m. for takeout.