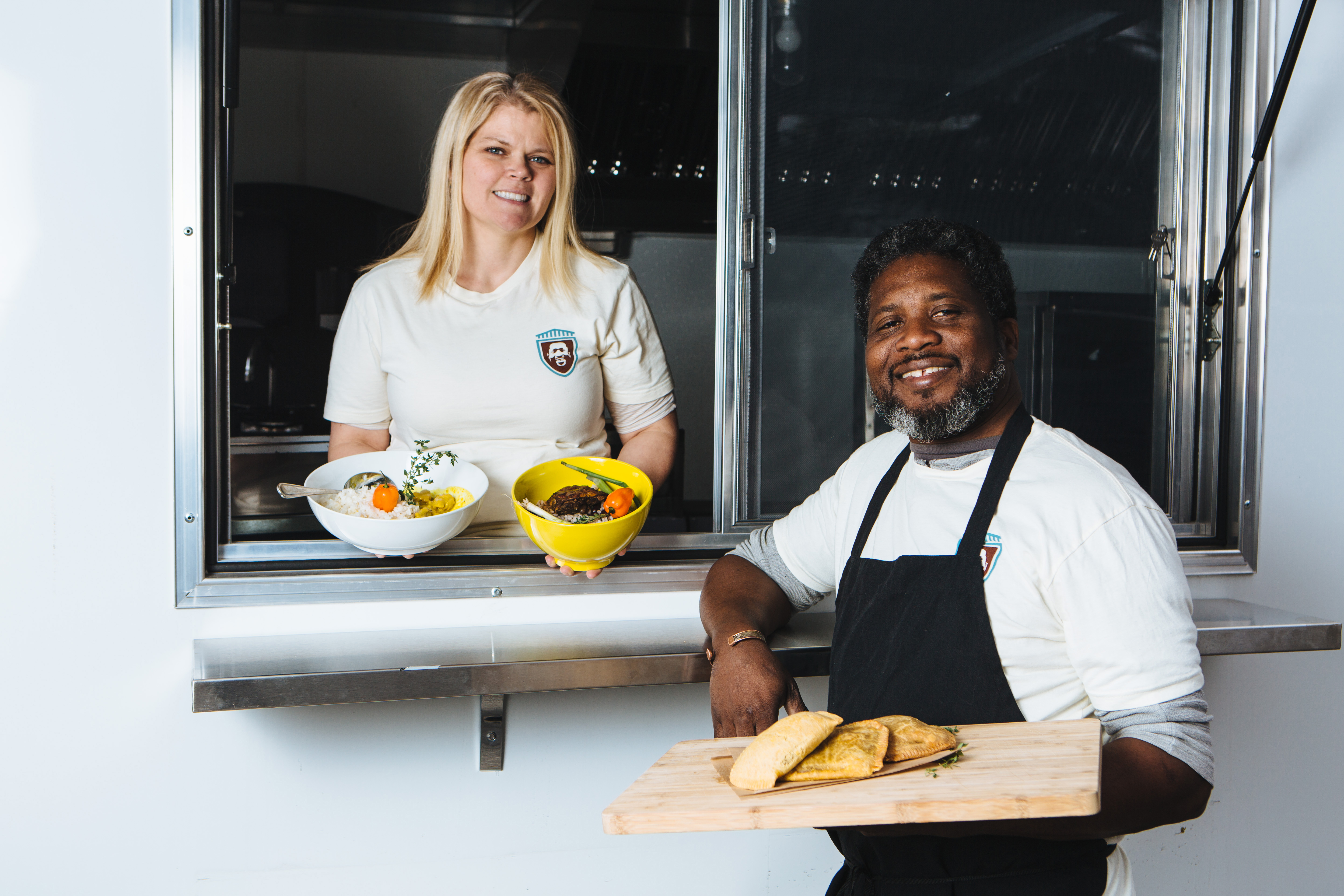 Ja Patty brings a taste of island life to Rhode Island, which we all know — unlike Jamaica — is not, in fact, an island. Co-founders Conroy Outar and Alison Rosario cook and sell authentic Jamaican food from their food trailer parked in front of the Lorraine Mills at 560 Mineral Spring Avenue in Pawtucket. Popular menu choices include meat (beef and jerk chicken) patties, curry veggie patties and apple pie dessert patties enclosed in savory baked dough, plus jerk chicken, goat curry and oxtail rice bowls.

The co-founders started the business two years ago out of a mutual love for Jamaica and Outar’s drive to launch his own hospitality-based business. Outar was born in Black River, St. Elizabeth, and was raised in Kingston, Jamaica. Rosario, on the other hand, is a school nurse teacher and mother of three from Warwick, and she has always loved Jamaica as a vacation destination where she can relax and recharge. The co-founders met at a business meeting, and matched up their interests to start the food truck together using Outar’s family recipes for Jamaican patties and other dishes.

Outar has an extensive background in hospitality. He loves the show “Love Boat,” and initially wanted to work on a cruise ship to live his life with that same vibe.

“I come from a small family back home and of all my family members, I was the only one bitten by the hospitality bug. It piqued my interests to possibly work on a cruise ship,” he says. “ I love watching ‘Love Boat.’ That really got me started on what I wanted to do. But I knew to accomplish my goals, I had to leave Jamaica.”

Back in Jamaica, he enrolled at the Hotel Olympia Institute and worked at the renowned Boscobel Resort, then came to the United States in 1991 on an H-2 work visa and began employment at the Sea Crest Resort on Cape Cod. He started out as a dishwasher, then busser and server, and slowly worked his way up to management. He also spent time at the now-closed Remington House Inn in Warwick as general manager, and eventually landed in Providence, where he trained in food service at the Westin, and then moved on to Red Stripe and Mill’s Tavern restaurants.

Launching his own business was the logical next step. He had previously led two food catering businesses, including Me Tastie Jamaica and then Patios Catering. At the same time, Rosario, who has always worked two jobs, wanted to start a food truck in addition to her career as a school nurse teacher in East Providence.

“Alison wanted to sell patties, and I make patties. So I said, ‘You want to sell, and I want to make them, can we figure this out?’” Outar says. Once they teamed up, they launched out of the food business incubator program Hope and Main in Warren, where they prepared the food for farmers market sales starting at three or four in the morning. 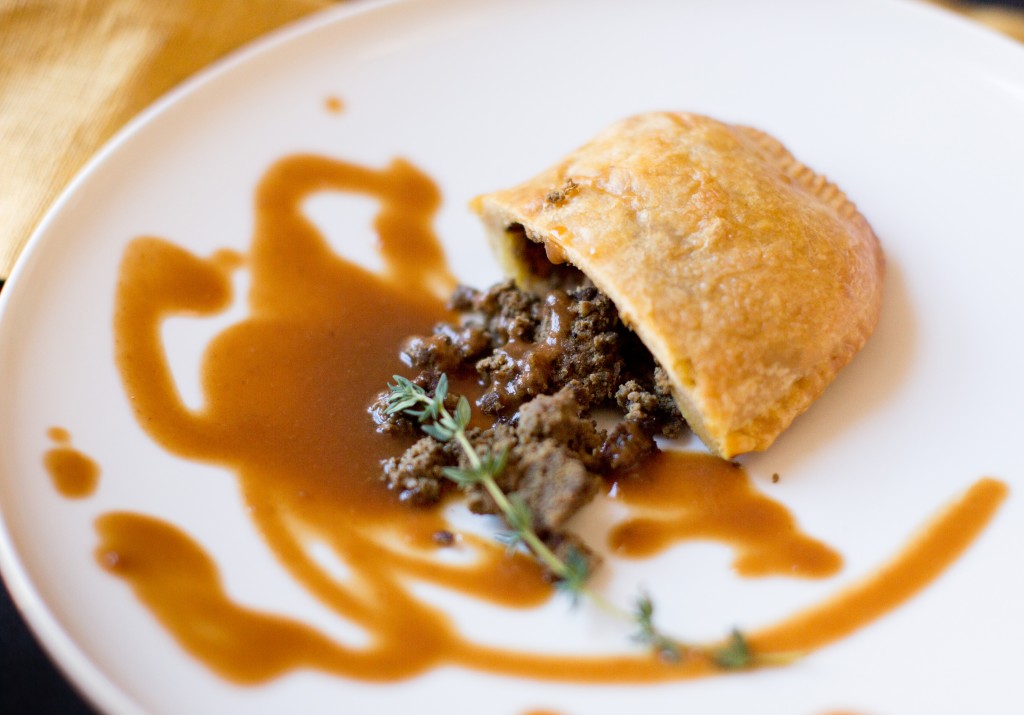 Now, because of COVID-19, they have decided to halt pop-ups and stay put for sales in Pawtucket. The hours for service are Thursdays and Fridays from 3 to 8 p.m. and on Saturdays from noon to 8 p.m., and they will bring food orders directly to people’s cars, if preferred.

“The number one thing is to do what our customers feel comfortable with and align that with the health regulations,” Outar says. “I love the fact that she’s a school nurse because that makes us more responsible. She’s representing a higher standard for taking safety precautions.”

“People are canceling their Caribbean vacations this year, and we’re bringing the vacation to them,” Rosario says. 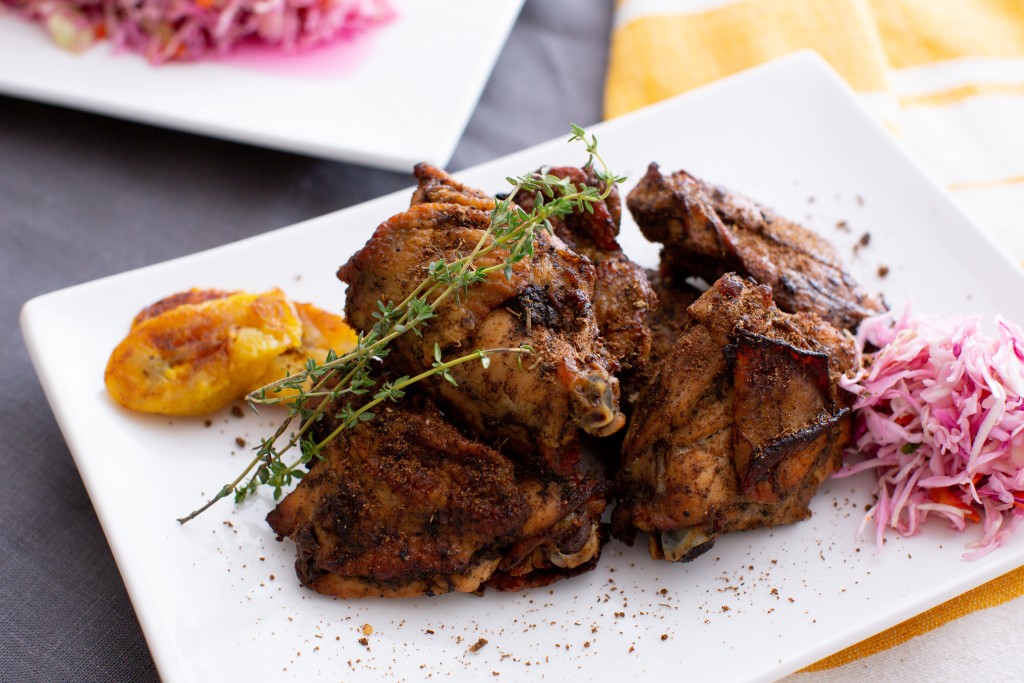 Eventually, they hope to launch frozen Jamaican patties that customers can reheat at home for retail sales, as well as open an eventual brick and mortar restaurant. There are tentative plans to start a fundraiser to help their dreams come to fruition. Outar hopes to return to Jamaica one day and share his business story with the youth there while launching an Air b-and-b project that would link Jamaica and Rhode Island.

Outar and Rosario are currently thinking of ways they can bring more fusion dishes to the Jamaican food business. Outar says that the Irish brought some baking influence to Jamaica, and since Rosario has an Irish background, they would like to play off of both cultures in cuisine. They’ve started incorporating other ingredients into dishes, including beet relish.

“I grew up on a farm in Western New York,” Rosario says. “My family canned and preserved whatever was in season. I am used to using what was around, and making relishes.”

Outar also says that Rosario has helped him view Jamaica in a different light. She learned to cook Jamaican foods she loves to eat, and she would always return to the island to recharge and soak up its peacefulness. “Alison has made me appreciate Jamaica all over again,” Outar says. “Sometimes it takes a different perspective.”

While the co-founders come from different backgrounds, they work well as a team. And they hope to start a conversation through their Jamaican food business. “Let’s use this food and experience to start having a conversation,” Outar says. “Let’s find out what we have in common. And what we don’t have in common, we can use that to learn about each other.”