Inside the Nathanael Greene Homestead in Coventry

The site preserves the legacy of George Washington’s most trusted general.

Most people have a vague recollection of childhood lessons about the American Revolution. We remember George Washington chopping down cherry trees, John Hancock’s signature and Paul Revere’s ride. But these near-mythic stories and larger-than-life figures distract from many of the lesser known but equally important players in the Revolution; Rhode Island’s own Nathaneal Greene is one of them.

His homestead remains well-preserved in Coventry, quietly conserving the story of this singular man. 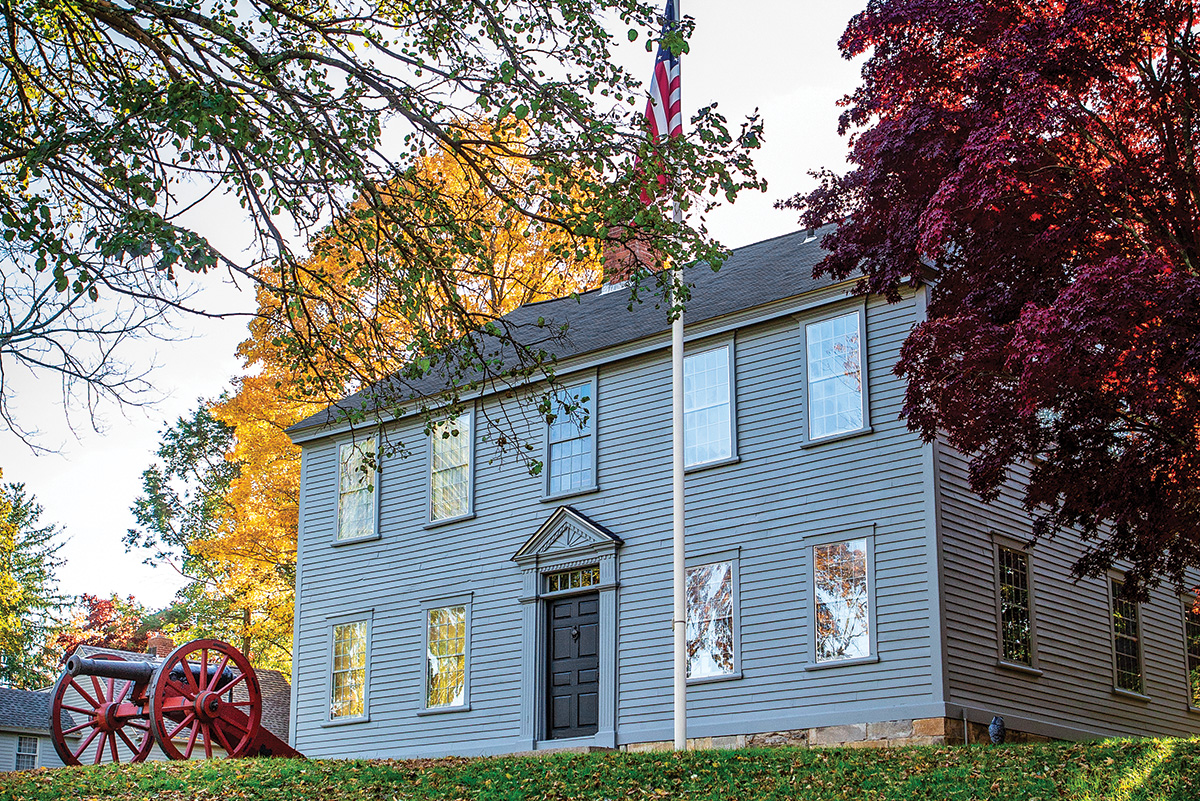 “Greene was considered George Washington’s chosen successor, his most trusted general,” says Dave Procaccini, president of the Greene Homestead Association. “But he has kind of been forgotten over time.”

Although Nathanael Greene’s name proliferates across the state, few people know his hometown. Born in Warwick in 1742, his family had already lived in Rhode Island for more than 100 years, originally colonizing the state with Roger Williams and a handful of others. His parents’ massive property, situated in Potowomut (now near Goddard Park), spread across several hundred acres and was a flurry of industrial activity. It had waterways, grain mills, a forge, warehouse, stores and anchor works.

“It was a massive complex for the time,” says Procaccini. “They were equal to the Brown family in terms of industrialization.”

Greene grew up helping his father, Nathanael Greene Sr., run his extensive operations in Warwick. When his father decided to send one of his sons to manage the iron forge on their property in Coventry, he picked level-headed Nathanael. In 1770, Greene Jr. built the homestead that still stands today.

Now situated on a small swath of green wedged between a suburban neighborhood and the Pawtuxet River, the Greene Homestead once stood alone on endless acres of woods and meadows. The building is unremarkable to the untrained eye. Plain rows of windows, a couple of short chimneys and a relatively unadorned door, it reflects the unfussy Quaker philosophy of its builders.

The home was meant to be the control center for the thriving industrial hub. And although the location was scenic, it was also ideally situated for manufacturing.

“The Pawtuxet River goes around us like a U, and it drops considerably from one side to the other. The forge here had seven water wheels and was a pretty massive complex for the time,” says Procaccini. “It had three hammers, which looks like a telephone pole with a huge hammer on it. I’m talking big — a twenty-foot-large hammer. They were for making really large iron items. They made anchors and change for shipping. I have copies of receipts from the time. Seventeen-foot sea-going anchors were made here.”

Even in the age of modern manufacturing, this level of production wouldn’t be an easy feat, and back in the 1700s, it took a degree of genius to keep things from falling apart. The first obstacle for Greene was labor. Before machines and motorized vehicles, most work was man-powered. The forge, though it tapped some of the river’s energy, still required a team of 100 men. As Gerald M. Carbone writes in Nathanael Greene: A Biography of the American Revolution, Coventry was the “isolated village that essentially owed its existence to the Greene’s family forge, where men from dozens of families toiled.”

Beyond managing his ironworkers, Greene also had to take care of logistics like tracking supplies, orders and deliveries. With the restrictions, slow transportation and limited resources, Greene had to stay well connected with the local community and business leaders across the state and colonies.

“Greene was an expert, a master at organizing men and material,” says Procaccini. “His experience running the forge and being in charge of the men and the material here was his training for the war. The fact that he was a great businessman translated to him being a great general.” 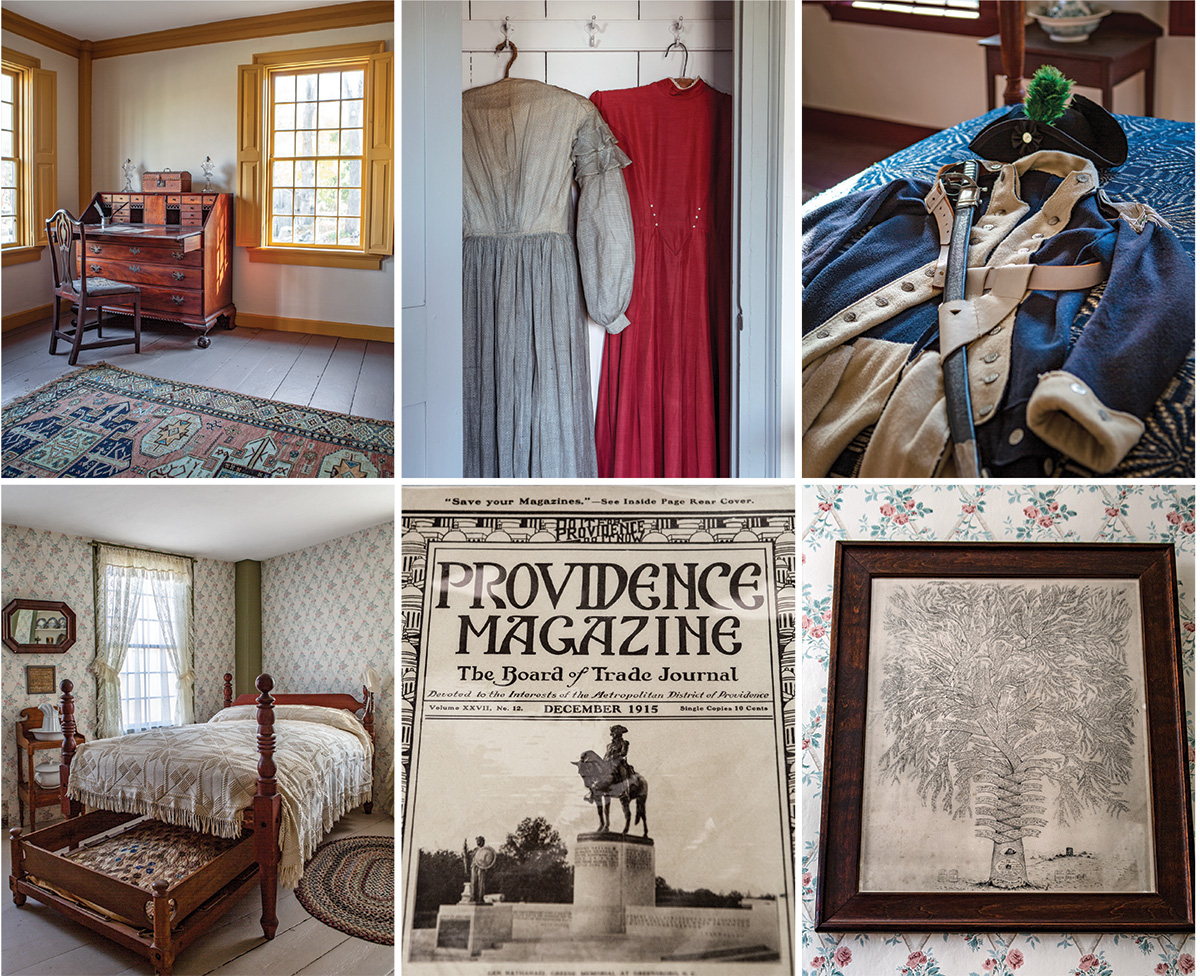 A peek at some of the vintage treasures — including clothing, decor, magazine clippings, photographs and more – that can be found inside the walls of this eighteenth century home.

And a great general Greene undoubtedly was. In the course of a single day, he climbed the ranks from private in the militia to a brigadier general (read: a big deal). He made a strong impression on George Washington while fighting alongside him in Boston, so much so that Washington made Greene commander of Continental troops in the Southern campaigns. There, Greene won victory after victory and earned the admiration of southern colonists. The war could have had a very different outcome without Greene. But despite his battlefield heroics, fate wasn’t kind to him when he returned home.

“He paid for supplies for his troops, which bankrupted the family,” says Procacinni. “He was broke.”

Greene was awarded a plantation in Georgia for his participation in the war, but he failed miserably to recoup his losses.

“The first rice crop they harvested at their plantation, a chunk of it was damaged by a hurricane, the rest of it either sank on a barge in the Savannah River and the other half burned in a barn,” says Procaccini. “Not long after that, he died at age forty-three.”

Perhaps his early demise is why Greene has faded from the limelight. He never had a chance to further engrave his name in history, but that doesn’t diminish the vital role he played in the war. And his legacy does live on, even if it’s quietly, at the homestead.

“Why is this house so important? There are sites all over the eastern United States that are connected to Nathanael Greene and things that he did,” says Procacinni. “But you wouldn’t have Nathanael Greene at any of those sites if he hadn’t lived and learned on this property.” nathanaelgreenehomestead.org