A Boston family built it from scratch. 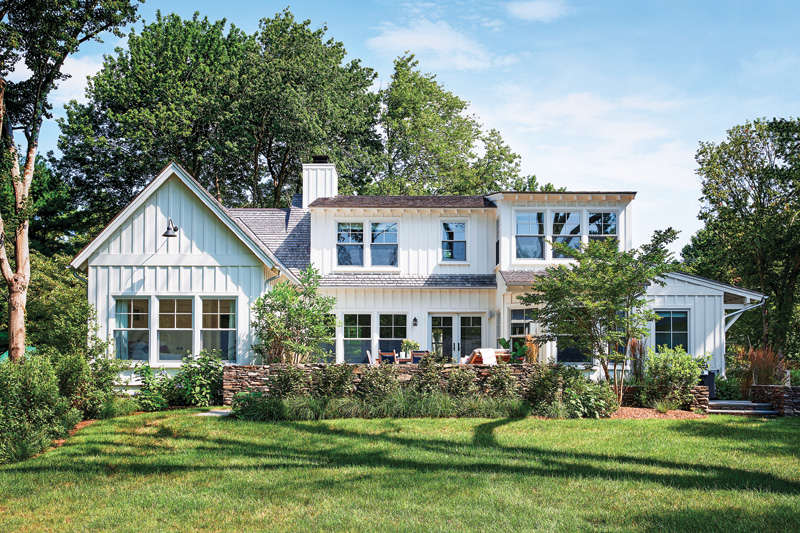 Surf’s Up
For a young Boston-area family with Rhode Island roots, the chance to escape the city to a sweet island retreat proved irresistible. “I grew up in Warwick and spent summers in a tiny beach cottage,” says Anne Trinque, who built the house with her husband, Brian. “We love the quietness of Jamestown and its community feel.”

The Trinques tried several times to buy a house on the island without success (“We were novices in real estate,” Anne admits) before a serendipitous meeting with local architect Ron DiMauro. The Trinques and their realtor had been checking out an unpromising, overgrown vacant lot near Mackerel Cove just as DiMauro stopped by in his 1969 Ford pickup, two surfboards strapped to
the back.

The couple, who work full-time, had done smaller home projects along the way — a finished attic that became a third floor; a redo of their first floor — but never a house from scratch, which for the uninitiated can be intimidating, to say the least. With DiMauro’s laidback vibe and understanding of how to create a small living space on a small budget, though, it was a relationship that was meant to be. “Kismet,” Anne calls it.

Unplugged
It was important to the Trinques to disconnect from hectic lives back home in Massachusetts and reconnect in their new space as a family. DiMauro head project architect Tyler Zagryn incorporated that theme into an open floor plan that creates easy sightlines from the kitchen to the living and dining areas. The ground floor master suite has French doors that open to a private terrace; a patio beyond the living room extends the space outdoors. At roughly 2,000 square feet, the result is a roomy cottage on a human scale. “It’s a house I could relate to,” Zagryn says.

Anne used Pinterest and designers’ websites, even wallpaper books, for design inspo. The result is a relaxing, less-is-more color palette that uses white as a backdrop, from the shiplap throughout the ground floor to the built-in bookshelves and sleek Carrara marble fireplace in the living room. Splashes of navy, including the Benjamin Moore “Newberry Blue” in the master bath, warm up the overall look. The wide plank oak flooring, a Brian splurge, adds a cozy underpinning. The classic Alaskan white cedar shingles on the roof, ensconced above the white board and batten siding, soften the exterior, and the Serena and Lily swing chair by the front door promises a lazy afternoon snooze. 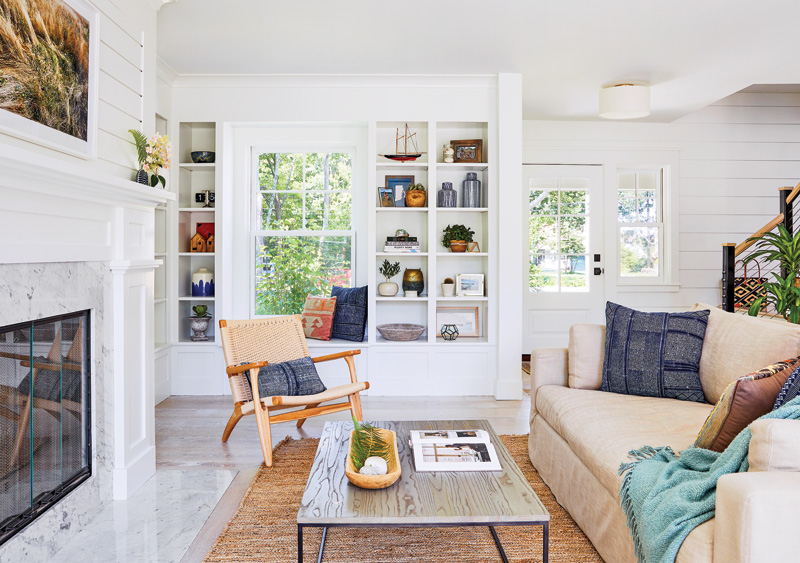 The print over the fireplace is Katherine Wolkoff’s “Deer Beds, on Block Island. Photography by Read McKendree/JBSA.

Everything In Its Place
No details were sacrificed, despite the building schedule of just eight months, and the Trinques spend most summer weekends and holidays on the island. They also hosted Christmas Eve for their families in Portsmouth and Warwick, worlds away from their classic 1920s Colonial in Brookline. “The pandemic made us feel so lucky to have a little more yard space and get out a bit more. The kids can ride their bikes and play wiffle ball,” Anne says. And the Trinques’ children, ages thirteen and eleven, have their own hideaway where they can hang out. The four bedrooms on the second floor include a bunk room for six, perfect for sleepovers, as well as a play loft above the garage. “It lets them just be kids again,” says Zagryn. Even the TV has its own room, big enough to accommodate four, on the second floor. It’s a perfect place to stash it. After all, no one wants too much reality intruding into such a peaceful spot. 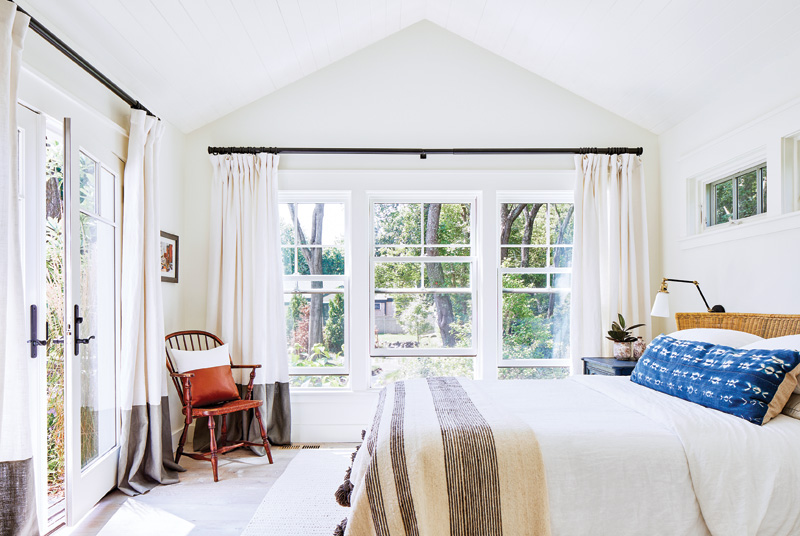 The master suite on the ground floor allows parents some private space. The pillows and blankets on the bed are Etsy. Curtains are Restoration Hardware. Photography by Read McKendree/JBSA.