Lindsay Ruggieri shares her experiences on the frontline of the pandemic. 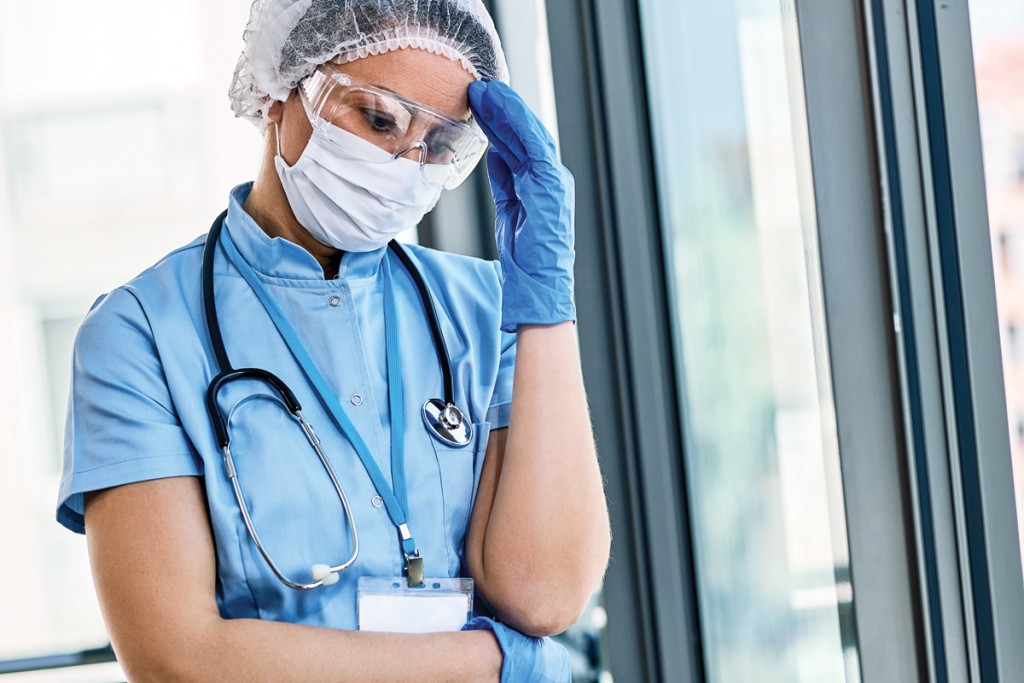 “It’s not over,” says nurse Lindsay Ruggieri. “We’re all kind of holding our breath and really hoping that it doesn’t get to a point again like it was last time. Because if we have to go through this again, I really think it’s going to tear us apart.”

Towards the end of March 2020, Ruggieri’s intensive care units transitioned to accommodate and care for COVID-19 patients. What ensued was what she could only describe as traumatic. As a nurse caring for patients suffering from COVID-19, Ruggieri was required to wear personal protective equipment at all times, only taking it off to use the bathroom or while on her break.

“In the ICU, we were a completely warm unit, meaning we had to wear an N-95 mask for the entire shift. It was a really isolating experience,” Ruggieri says. “I constantly felt dehydrated, I couldn’t really interact with anyone else in the hospital. Everyone was afraid to come into the unit. It was very mentally wearing on everyone. And then when we went home we felt like we had to wash off the hospital from us. I would have a change of shoes in the car. We eventually got hospital-laundered scrubs because we were having to do laundry every single night.”

Debates about the coronavirus also added to the isolation felt by health care workers on the frontlines, Ruggieri says. For a while, it seemed the world was unaware of just how serious the virus was.

“It [was] mentally draining and isolating. I think it’s because you have the whole country and the whole world arguing about what’s going on and if it [was] real and if it [was not] real,” she says. “All day we are wearing that gear for the entire shift, and nobody except the people that work directly with you have any idea what life is like.”

Patient interactions were also difficult, Ruggieri says. She was there for every step of their treatment at the ICU, including goodbye calls with their families.

“I felt like: Who am I to be listening to people’s last moments with their families on an iPad?” Ruggieri says. “There were some weekends that I would have three people die just on my shift, and I would have to set up the iPad and listen to them and their families scream and cry and see them and hear their last words as they died alone with just me in the room. That would happen multiple times within days. I didn’t realize how much it was affecting me until we came to the worst of it. I think it’s still really hard for us to talk about. Everyone asks what it was like, but there’s really no way to describe it. It’s trauma.”

Ruggieri’s unit is responsible for responding to codes called for COVID-19 patients. There were patients from different medical floors who were deteriorating and were sent to her unit. She says there were many times when she wouldn’t see her coworkers for a whole shift because they were all locked away in different rooms dealing with the same situation.

“It felt like there was no winning. There were no positive stories that came out of it for a long time,” Ruggieri says. “There are a couple of patients that I struggle to talk about without crying, even now. It was just so intense especially with their family going through it with them as well.

You have to understand that normally an ICU patient is with us for a few days or a week; these patients were with us for months and months at a time.”

But her unit did what they could to celebrate the small victories.

“Our managers taped a list of patients that survived to the back of our breakroom door to remind us that there were people that made it out,” Ruggieri says. “They played the song from Rocky [“Going the Distance”] from the speakers. I literally almost burst into tears because it was just what we needed.”

Nursing is both a difficult and rewarding job, and Ruggieri believes it’s important to celebrate the lives cared for and saved. She says she also developed a newfound respect for her colleagues.

“We all just made it work as much as we could. I really love my job and I wouldn’t trade it for the world. Being able to help people is what I love about being a nurse,” she says. “It’s being a part of these instrumental moments that really shape people’s lives and it’s a profound job to have.”