The now-regulated Detroit-style pies can be ordered and picked up with very specific instructions through Instagram. 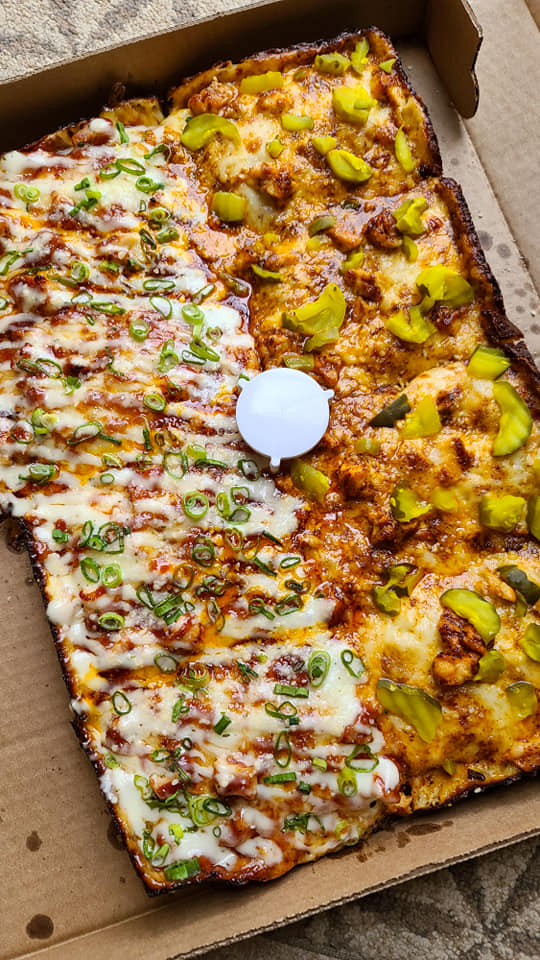 A half barbecue chicken and half Nashville hot chicken (with pickles!) pizza from Hotline. Photo by Jamie Coelho.

There is such a thing as illegal pizza, and I’m guilty as sin for indulging in it.

When the pandemic set in, like many people, Eli Rumbarger was out of a job and trying to figure out a way to pay rent and make a living. The Providence pizza maker started crafting the focaccia pies he is known and loved for within the local restaurant industry out of his home kitchen on the West Side and selling them to friends and family. Word traveled fast, and soon his Instagram account @Hotline_pizza turned into a makeshift storefront, coordinating direct message orders and socially-distanced, timed takeout pickups outside his apartment at a double-decker house.

He always knew he wanted to do something food-related on his own, but he wasn’t sure what it would be. “I wasn’t in any rush to put myself in debt because the restaurant industry isn’t exactly cheap,” he says. “I didn’t really have any financial backing, investors or family money. I wanted to approach things slowly.”

Originally, he and his former partner ran Hotline Pizza as a scrappy “pop up” and sold pizzas at the former Far West bar and Fortnight wine bar. But when restaurants and businesses shut down early on during the pandemic, Rumbarger ran operations out of his home. Customers would order pizza through Instagram direct message or email, pay on Venmo, then pull up in their cars outside his apartment at an allotted time slot, and they would hand the pizza through open passenger side car windows.

“It was just a hobby at first,” Rumbarger says. “Then when the pandemic happened, I didn’t want the idea of Hotline to die so we started doing it out of the house, even though it was illegal. There wasn’t a whole lot of regulation. They weren’t pressing down on you at that time, because there was so much going on with the Department of Health and restaurants.”

Rumbarger and his former partner started out making only ten pies on Fridays and Saturdays at first, but demand picked up and they increased production to twenty pies on Fridays and Saturdays, then thirty pies Wednesday through Sunday. They were able to operate this way for a while, until the Rhode Island Department of Health more recently started cracking down on “renegade” food businesses like his, many of which sprouted up out of hardship during the pandemic. They had to stop production until they figured out how to make it legal.

“It took all my savings and almost a month and a half off from work, because they were aware of us so we couldn’t continue to operate,” Rumbarger says. 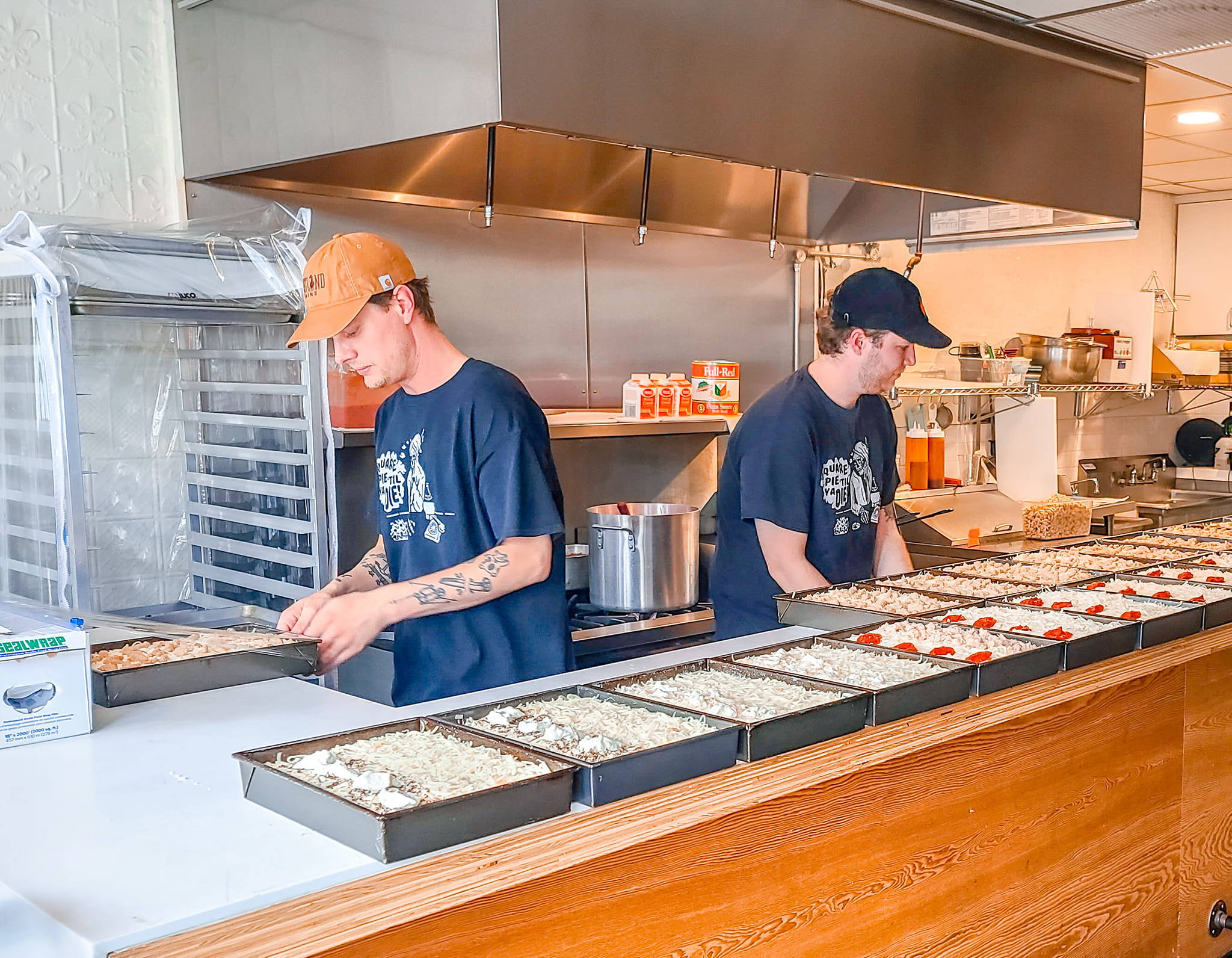 The “renegade” experience made Rumbarger realize his business model was a proven hit. It was worth making it legal. Rumbarger filled out necessary paperwork with help from friend Alex Russell, who used to run another food business called Solid Gold Provisions out of Long Live Beerworks. The two teamed up to take Hotline to the next level.

“Luckily, I had this guy [Alex] because I am not a businessman. I am a cook. It was a hobby for me and I just liked making the pizzas and making people happy with pizza, but when it came down to it, I needed to learn some things,” Rumbarger says. “The other thing is I didn’t have somewhere to operate out of. If it wasn’t for Alex already having the experience of doing it with Solid Gold, it would have been much harder.”

They consulted with area incubator kitchens like Hope and Main and the Bath Food Co. community kitchen, also on the West Side. Unfortunately, they say the monthly fees were more than they could afford. Eventually, Hotline found a home next to Broadway Bistro on the West Side, which used to be the Tailor Shop, and now serves as a community kitchen for startup food businesses, including Irregardless Biscuit Co. on weekends.

“We were so lucky to have known Pat at Broadway Bistro and he had some availability here,” Rumbarger says. “We just rent the space out, and it’s an all-inclusive thing. It’s actually affordable for us. A lot of people aren’t going to be able to find a solution like that right away.”

While he and Russell have been fortunate to find a place where they can afford to operate legally, Rumbarger notes that many other food businesses aren’t so lucky. They are proponents for the cottage food industry bill in Rhode Island, which would allow fledgling food businesses with shelf-stable products to produce goods in Health Department-regulated home kitchens. The cottage food industry bill was up for testimony last month with many other small food businesses testifying on the bill’s behalf, but a decision has yet to be made.

“If the cottage industry was legal in Rhode Island, we would have absolutely considered that,” Rumbarger says. “There is no cottage food law here. That’s how the whole popup thing started at a place like this, giving people an opportunity who didn’t have one. There are so many people who could benefit from it.”

Even before the pandemic hit, Rumbarger’s pies already had a following within the hospitality industry. He started out working his way up from dishwasher to server to cook in restaurants like Carrabba’s followed by cooking jobs in the kitchen of an assisted living facility. Finally, he ended up at New Rivers restaurant and decided to go to culinary school at Johnson and Wales University, graduating in 2014. When Rumbarger moved on to work at the East End, where he and Russell met, Rumbarger began making focaccia-like Sicilian-style pizzas for the staff to eat.

“It was a focaccia recipe I had that we would make for staff meal [a meal shared amongst staff members of a restaurant before or after service], and I would use odd leftover ingredients like ends of high-end cheeses or charcuterie,” Rumbarger says. “Everyone always loved it and I heard it enough times that people were like ‘I would buy this,’ so I started taking it seriously.”

His Sicilian version evolved into more of a Detroit-style pizza, baked in rectangular cake pans. Locals call it “square pizza,” and the guys even wear T-shirts that say “Square pie till ya die.” As business has increased, Rumbarger now has four generations of pans; some are more seasoned than others. They can only sell forty-five pizzas a day and they sell out fast. 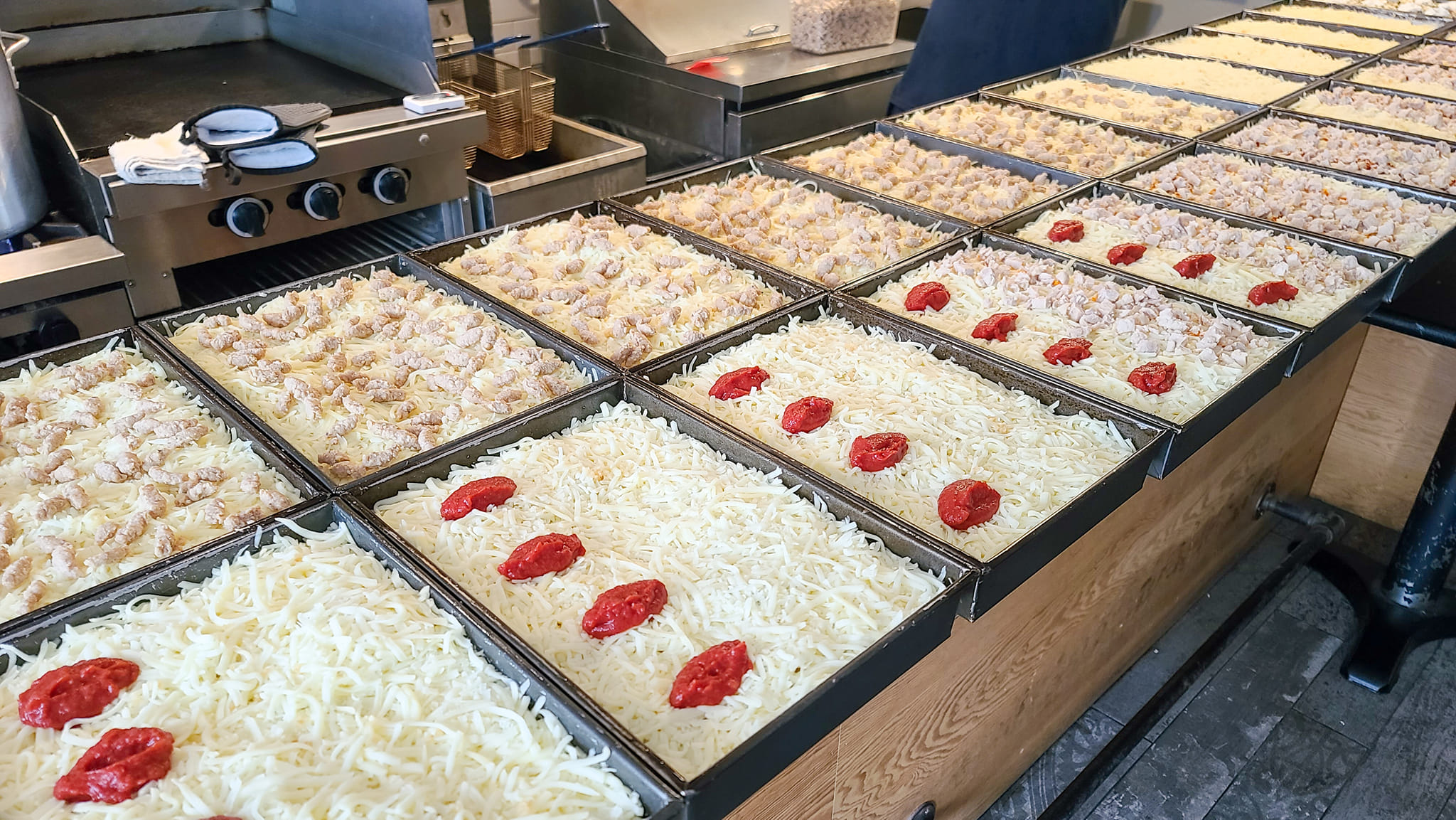 It’s the early afternoon at the former Tailor Shop kitchen, and Rumbarger and Russell have forty-five pans laid out across the counter, each one hugging par-baked focaccia dough topped with a cheese blend of provolone, mozzarella and cheddar, some with sauce and some with sausage for a special pie they are serving that day. The dough will soon be spread with tomato sauce, vodka sauce or barbecue sauce and and topped with other fun ingredients like sausage, pepperoni cups, Nashville hot chicken and pickles or barbecue chicken and scallions. What makes the pizza really stand out are the cheese-crisped edges and light and airy dough.

“The seasoned pans and commercial conventional oven create the crispy edges with just the right amount of cheese. The cheese actually falls in and fries in between the dough and the pan,” Rumbarger says. “For the dough, we use King Arthur high-gluten flour, yeast, salt and water, and I hand mix it every day. It usually proofs for three or four hours, and we do a par-bake on it because it is topped so heavily with a lot of cheese and sauce. If it was a raw dough, it wouldn’t really bake.”

Rumbarger and Russell continue to sell pies through Instagram, with Russell handling and organizing direct message orders and pickup times.

“If I had a position title, it would be like bookkeeper, social media, pizza topper,” he says with a laugh.

By using Instagram to keep track of orders, they avoid paying an outside vendor like Toast. They start taking orders through direct messages at noon sharp each day, Tuesday through Friday. Potential customers send them a message saying hello or what pies they want (three max). They only take the first forty-five orders that come in, in sequential order. Then they’ll follow up with more details on pickup, which takes place from 4-7 p.m. on the days they are operating. (More detailed instructions here).

Some people say the pizza is impossible to get, but that’s a myth, they say.

“It’s very unconventional and some people get frustrated with it. A lot of people don’t have Instagram,” Russell says. “People will pop in here and say, ‘We don’t have instagram but we’d like to order pizza.’ Eli will take out his personal phone and say, text us and we’ll get you on there. We don’t want to leave anyone out, but Instagram ordering keeps us very organized.”

The pizza continues to sell out very quickly after the noon orders drop, especially on Fridays. “I talked to quite a few people that have been like, ‘Oh you’re out of pizza, that’s cool. I’ve tried. I just can’t get one,’” Rumbarger says. “I think people might try once, twice, maybe three or four times, and if they don’t get in, it just turns them off of it. But we are here, and we are serving pizza.”

Russell recommends trying to order on Tuesdays and Wednesdays as they are slower than other days, while Fridays fill up almost immediately. “Friday is the hardest day to get pizza because right when the clock hits noon, we get enough messages to sell forty-five,” Russell says. “Tuesdays and Wednesdays, they trickle in. We try to tell people who are frustrated with ordering to try on Tuesday or Wednesday. That’s your best option.”

As for the future, the pair wants to keep it low key. “People are always asking if we are going to open a storefront,” Rumbarger says. “It’s a very hard time for a lot of people in the industry, and this is just doing it for us, where we can live comfortably and continue to have a life with our families and pay our bills, which is important.”

Right now, it’s just the two of them, Rumbarger and Russell, and they are not ready to take on more staff. They are happy to run Hotline just four days a week, since making and proofing the dough takes so much time and effort from the early morning to later evening. But if the cottage food law were to pass, they wouldn’t be against going back to the home kitchen.

“It’s something that a lot of people can absolutely do and I just hope that people will be able to do it,” Rumbarger says. “The situation we found is that a lot of people aren’t going to be as lucky as we are. There are people who have cool food business ideas and if they can’t get them out there then that’s a bummer.”

Slices of Hotline pizza will also be available every Friday until they sell out at the Salon in Providence, starting at 6 p.m.

Where to Get the Best Pizza Strips in Rhode Island

This RI Bakery Turns Party Pizza into an Artform