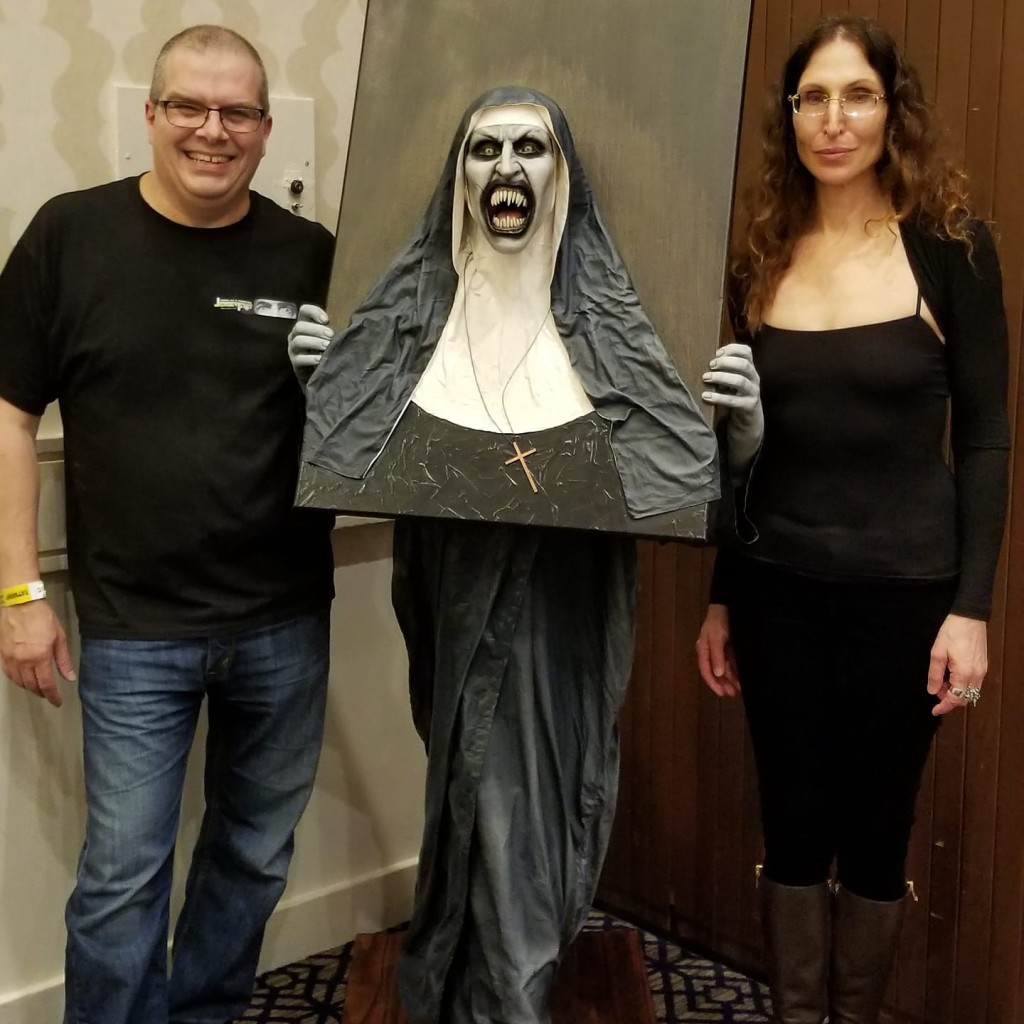 DeConte with his model of Valek the Nun from the Conjuring 2 and portrayer Bonnie Aarons. Courtesy of Neal DeConte.

Well, horror figures, that is. It may sound like some creepy Cabin in the Woods plot line (or even something out of the Conjuring, which calls the same town home), but in reality, it’s just a labor of love by born-and-raised Rhode Islander Neal DeConte. We caught up with the gifted model-builder and all-around nice guy to learn more about his unconventional hobby. 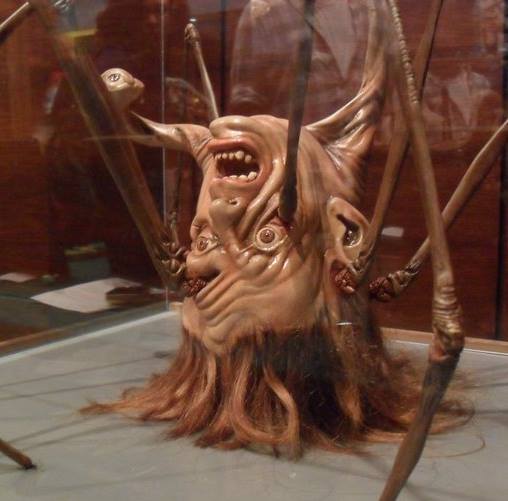 Norris head from The Thing. Courtesy of Neal DeConte.

What came first, the horror obsession or your interest in model building?

I think it was the horror obsession. I’ve always been interested in horror movies, even as a young kid. I think what always got me was, ‘How was it done?’ You know, the backgrounds, the special effects, the costumes, the props. That always intrigued me, trying to figure out how stuff was done.

What I really wanted was get into filmmaking, especially special effects. But this was the late seventies by the time I was getting out of high school. Back then, there was nothing for special effects, except for special effects houses out in California. Even then, you needed to know someone to get into that business. There was no way that a local kid from Rhode Island was going to be able to pull that one off. Instead, I ended up working in the printing industry for twenty-plus years.

When and how did you get into model-building?

I started around age seven or eight. There was a model kit company out of New York called Aurora, and they did the classic monster styrene kits like Dracula, Frankenstein, werewolves, and all of that. That’s what got me into the model business, seeing those. It started out as a hobby and now I do commission work for a handful of people. I have a high school diploma — I did my art classes and loved that, but I’ve had no formal training. I’d pick up magazines and read up on it, and then once the internet hit that made things easier to learn. But it’s all self-taught work, from the sculpting to the molding and casting to the paint work.

Do you remember what your first model was? 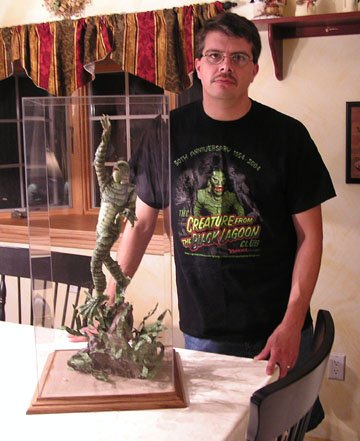 Creature from the Black Lagoon. Courtesy of Neal DeConte

What are your top horror films?

Exorcist, that’s got to be one of my top ones. It still freaks me out to this day. Blade is another good one. Also, Jeepers Creepers, Hellraiser and a little-known movie called Behind the Mask; The Rise of Lelie Vernon. And then Creature from the Black Lagoon is a classic. You’ve got to see it if you haven’t already. It’s an old, black and white movie, but the creature suit in it is remarkable. It still holds up. And a little tidbit: I actually built a creature model for Ricou Browning, who played the underwater creature in Creature from the Black Lagoon.

No way! How did that come about?

We met at a convention called Creature Fest down in Florida. It was held at the actual lagoon where Creature at the Black Lagoon was filmed. I brought a piece to have him sign and he saw my work and fell in love with it. He commissioned me to do one for him. It was a true honor and he’s such a nice guy. We’ve stayed in touch over the years, and we try to get together when we can.

Do you still do conventions?

I haven’t done any in a few years, but for a while I was doing quite a few of them. I do a lot of competitions, too. There are model contests throughout the U.S. and there are a few figure shows put on by the International Plastic Modelers Society. I try to make those if I can. And there’s a big one out in Louisville, Kentucky, that we try to go to every year.

Trust me, I’ve sent over [photos of] just a smidgen. But the Jeepers Creepers figure has to be one of my favorites. That one is entirely sculpted by me. 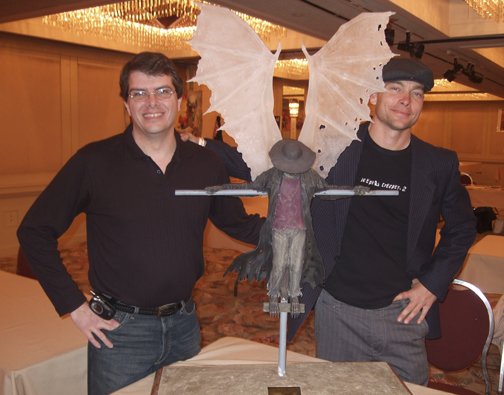 DeConte with his Jeepers Creepers model and Jonathan Breck, who played the Creeper in the film.

What is your process? What materials do you use?

Honestly, it all depends on what I’m starting with. If I’m starting with nothing — like the Jeepers Creepers piece, the Leatherface figure or the Victor Crowley figure — you’ve got to make the sculpt first. I’ll use screen captures from the movie or behind the scenes photos as reference and then I’ll usually use a wax-based clay to make the sculptures. Once that’s done, it’s a molding and casting process; I make a silicone mold and do resin castings. Then it’s the paperwork and the finished work. With the Creeper, for example, the shirt and pants on him are fabric. It wasn’t sculpted into the figure — I laid them on top of the casting after the fact. Any of the fabric work, I do the sewing myself. 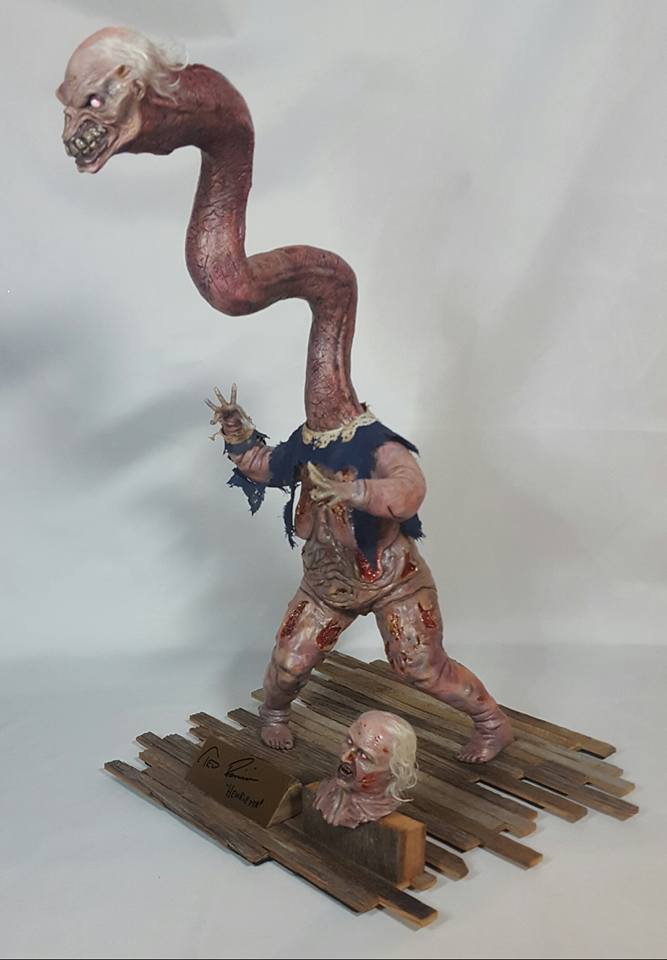 You want to make it your own. I just look around and see what I can find that works. But a lot of these pieces start as model kits where you purchase the unfinished kit and you build it, but nowadays I never build straight out of the box. A lot of the builders out there, they usually do what we call ‘box stock’ where you pull it out of the box, throw it together and you paint it. I’ve never been a fan of it, and I’d say for the past ten years mine have never been just out of the box. I’m always doing some sort of alteration or modification. Like for the Henrietta piece, it came with sculpted hair

Or for Henrietta [from Evil Dead II], that model kit came with sculpted hair, and I’ve been doing away with most of the sculpted hair now. It looks like real hair on her because I used lamb’s wool. It’s laid in three or four pieces at a time on the head.

A tool that I have added to my arsenal is a 3D printer. It’s great for creating accessories for projects or there are a lot of 3D files for characters out there that aren’t available as model kits. The Tillie file is my own interpretation of the character from Asbury Amusement Park in New Jersey — my first digital sculpt in Blender.

How long does a model take you to make from start to finish?

For a sculpture from scratch, it could be anywhere from 150 to 300 hours. I think the Creeper was the biggest one I’ve done and that was probably 300 to 350 hours. But the average model kit from build to finish takes me around 100 to 200 hours each. 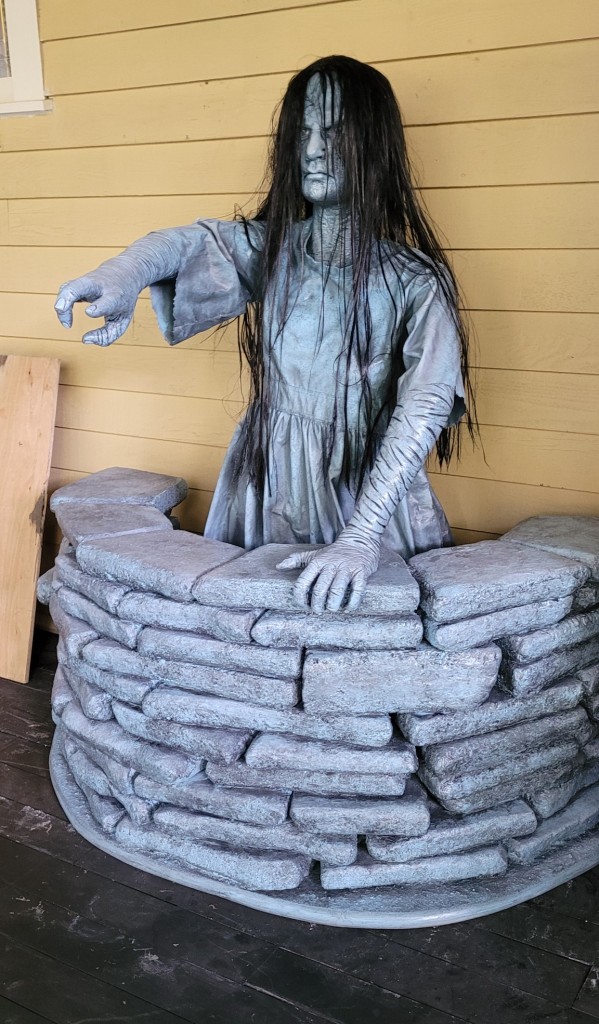 Samara from the Ring. Courtesy of Neal DeConte.

What do you do with the non-commissioned models that you make?

We have model display room with a display case. The room also has some of the full-sized pieces, like the nun and Samara from the Ring. The nun stands about seven feet tall, and Samara is about four feet tall.

I was terrified of the Ring the first time I saw it, so Samara would definitely give me nightmares. Do you ever get creeped out by them?

Every once in a while, I’ll get up and either move things around or put something new in there and later be like ‘Woah!’ I’ll scare myself. As my wife says, we’re decorated for Halloween year-round.

I saw you also dabble in other types of genres, like Anime and Sci-Fi.

I’ve also always liked Science Fiction. And if someone approaches me about doing something else, I try to keep an open mind. But to take on one of these projects you really have to be invested in it and love what you’re doing. There’s a lot of commission work I turn down because it’s not what I’m in to.

Tell me more about the the Orca boat figure from Jaws — the detail is amazing.

That was a gift for my stepson, he’s a huge Jaws fan. It is completely scratch-built and adds up to about 1,000 hours-worth of work over a year and a half. Anything you see on that, I made from raw material. The sand on the base of the Orca is actually from Quint’s Shack out on Martha’s Vineyard. You’ll see there’s also a piece of plexiglass with what looks like a piece of wood in it — that’s actually a piece of the hull from the Orca that I purchased from the Jaws prop master. Whenever I can, I try to work something like that in. Like the wood on the base of the Henrietta piece is from the cabin in the movie. I’ll also have pieces signed by the actors who were in the costumes. 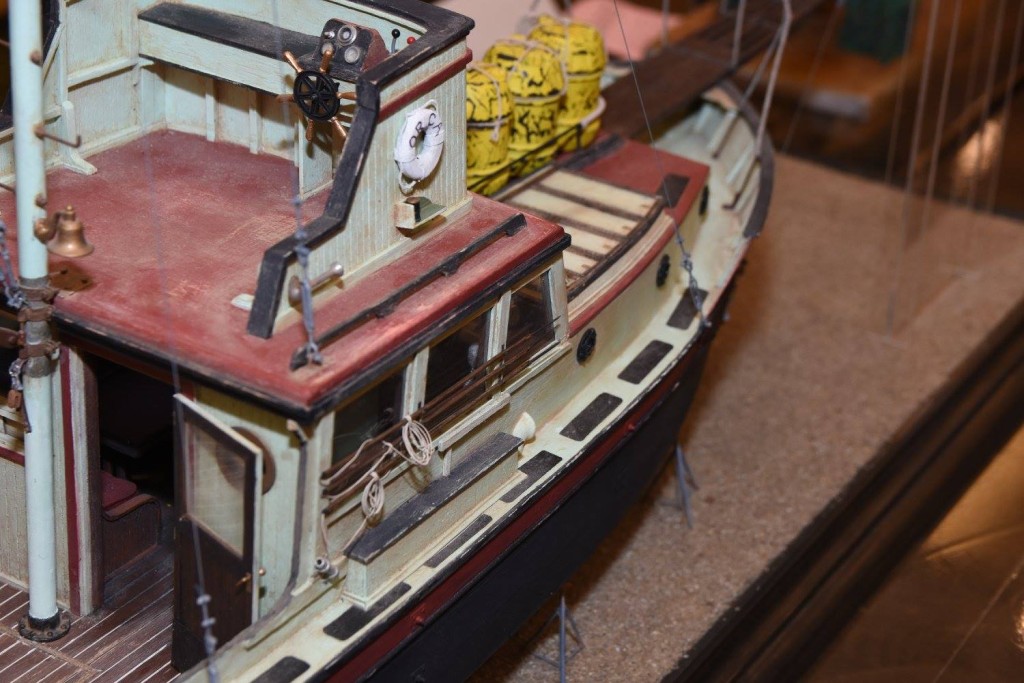 The Orca from Jaws. Courtesy of Neal DeConte.

It sounds like your display room should really be a museum.

Hah, I’ve heard that before! You know, it’s a passion I have. I just try to get it as accurate as I can to the actual item or figure it is. 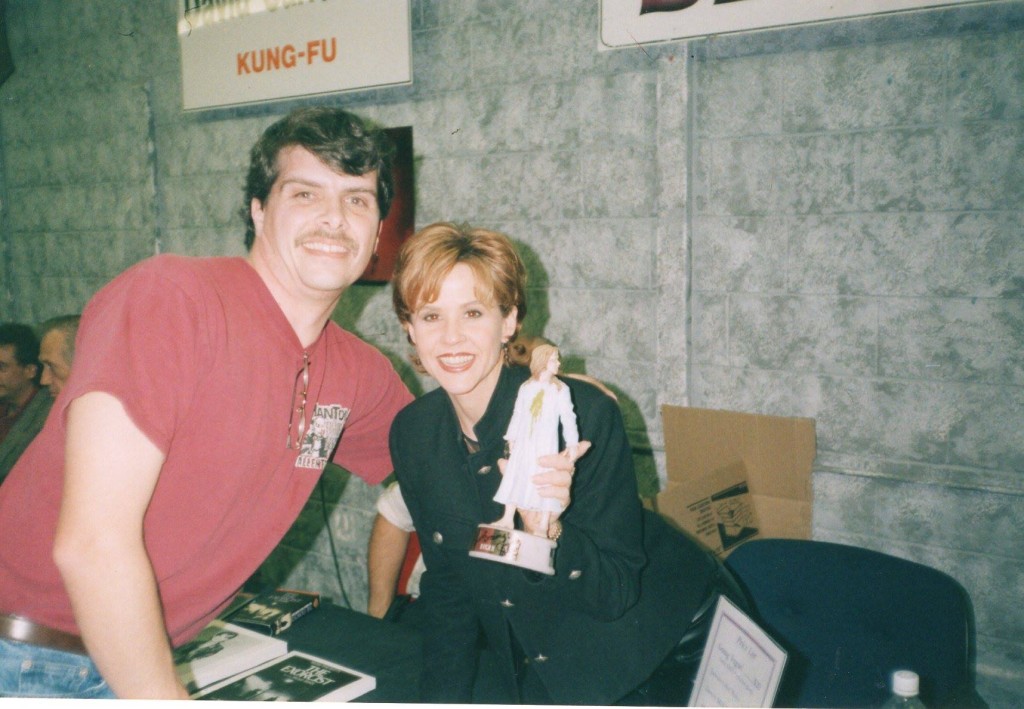 Do you have anything in the works now?

Yes, I’m working on a one-quarter scale Wesley Snipes from Blade for a customer out in California. Again, that started out as a model kit, I’ve built the base from scratch. The customer also wanted an alternate set of arms and a different head, so I’ve sculpted, molded and casted those for him. I have a few other commissions lined up but I’ve been trying to pick them out one at a time.

How can people reach you if they are interested in commissioning a piece?

They can email me at ndeconte@yahoo.com. They can also look me up on Facebook under Neal DeConte — there you’ll find more photos of other pieces and evolution shots.