An Interview with the Grinch from Dr. Seuss’ How the Grinch Stole Christmas at PPAC

Local media interviewed the curmudegeonly monster about his performances in the musical currently showing at PPAC . 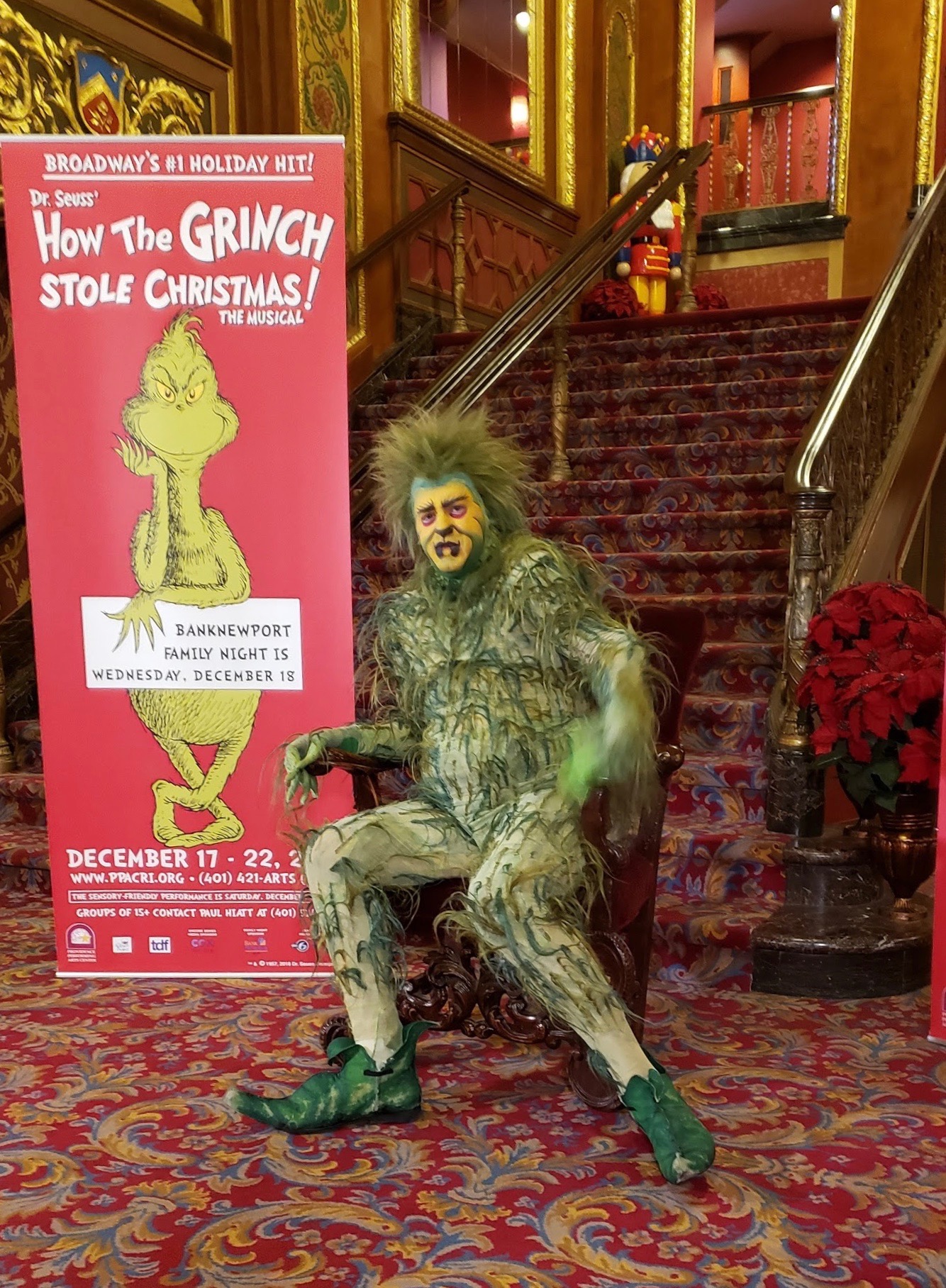 The Grinch is played by the amazing Philip Huffman in Dr. Seuss’ How the Grinch Stole Christmas! the Musical.

He’s a mean one, Mr. Grinch. He really, really is. Yesterday, local media including Mario Hilario from NBC 10 WJAR, 92 Pro-FM’s Barbi Jo DiMaria and me, had the chance to interview the real deal Grinch at Providence Performing Arts Center to help promote the currently running musical, Dr. Seuss’ How the Grinch Stole Christmas! I was a little unprepared for the interview, as the Grinch was the real Grinch, and not just some actor in a costume as I had expected. He started out by complaining about being there and having to wake up so early for the interviews. It was 10:30 a.m.! Caitlyn DiPompo at PPAC told him he had to stay for at least a half-hour to do the interviews, and all he did was grumble!

He was about as charming as an eel, and as appealing as a bad banana, with a greasy black peel.

“I don’t have all the time in the world. Come on people! I’ve got a show tonight,” he said with a grimace. “Maybe for Barbi Jo, but the rest of you, no!”

We laughed (okay, I nervously giggled) and proceeded to interview him anyway. Many of us had already seen the show, and loved it. We know he’s not all that bad, and that he changes his attitude on a nightly basis (kinda like my own husband and children). The Grinch musical follows the curmudgeonly monster as he decides to steal Christmas from a cheery town called Whoville by sneaking into their homes at night and swiping all their presents and decorations. He is confronted by an innocent, loving little girl named Cindy Lou Who, who thinks the Grinch is Santa. She later changes his mind about pursuing his evil ways. Besides, the Grinch’s plan fails anyway since we all know Christmas is about way more than presents.

During our media visit, the Grinch harassed us for taking photos and causing him the inconvenience of talking to other humans. He much prefers his dog, Max, who narrates the show. His heart is between the size of a kidney bean and a kiwi, but spoiler alert, it grows two times the size by the end of the show.

We asked him how he likes Providence and he said: “Providence is okay I guess. I am not really a fan of most cities. Especially around this time of year, Christmas…” he said. “Everybody is always so happy. I thought I was through with it when I left Whoville, but no, it’s everywhere apparently!”

I asked him how he studied up for his role, and what it takes to put his Grinch look together. Apparently, he did nothing at all to prepare for the stage adaptation! “It came naturally. The minute I was born, I was like ‘I don’t like it here,’ and I went with the flow,” he said. “I didn’t have to study much. My preparation for this role was sleeping, eating, sleeping again, solving world hunger, telling no one. I am just very angry all the time. I don’t like anything.”

Since Providence is a food town, we asked Mr. Grinch about this favorite meals to eat, and this is what he had to say: “The more rotten the better. Rotten food with flies. I sprinkle them like capers.”

Then, Mario Hilario had the gall to ask him if he likes bacon! Mr. Grinch replied with enthusiasm. “Oh yes, especially when it’s still on the pig. The problem is catching it!”

Barbi Jo asked him if he has any holiday traditions of his own. He paused, and rolled his eyes. “Stealing Christmas!” he said. “Do you not know the title of the show, Barbi? Did you prepare at all? Did you do any research, wikis, anything?”

I asked him if he was inspired by any other real-life Grinches, without naming any names…

“Other Grinches are inspired by me. I am the real deal. I’m the original,” he said. “I am very proud of that. Hashtag #ProudtoBeGrinch. Put it on your Twitters and your Instagram. And your MySpaces.” 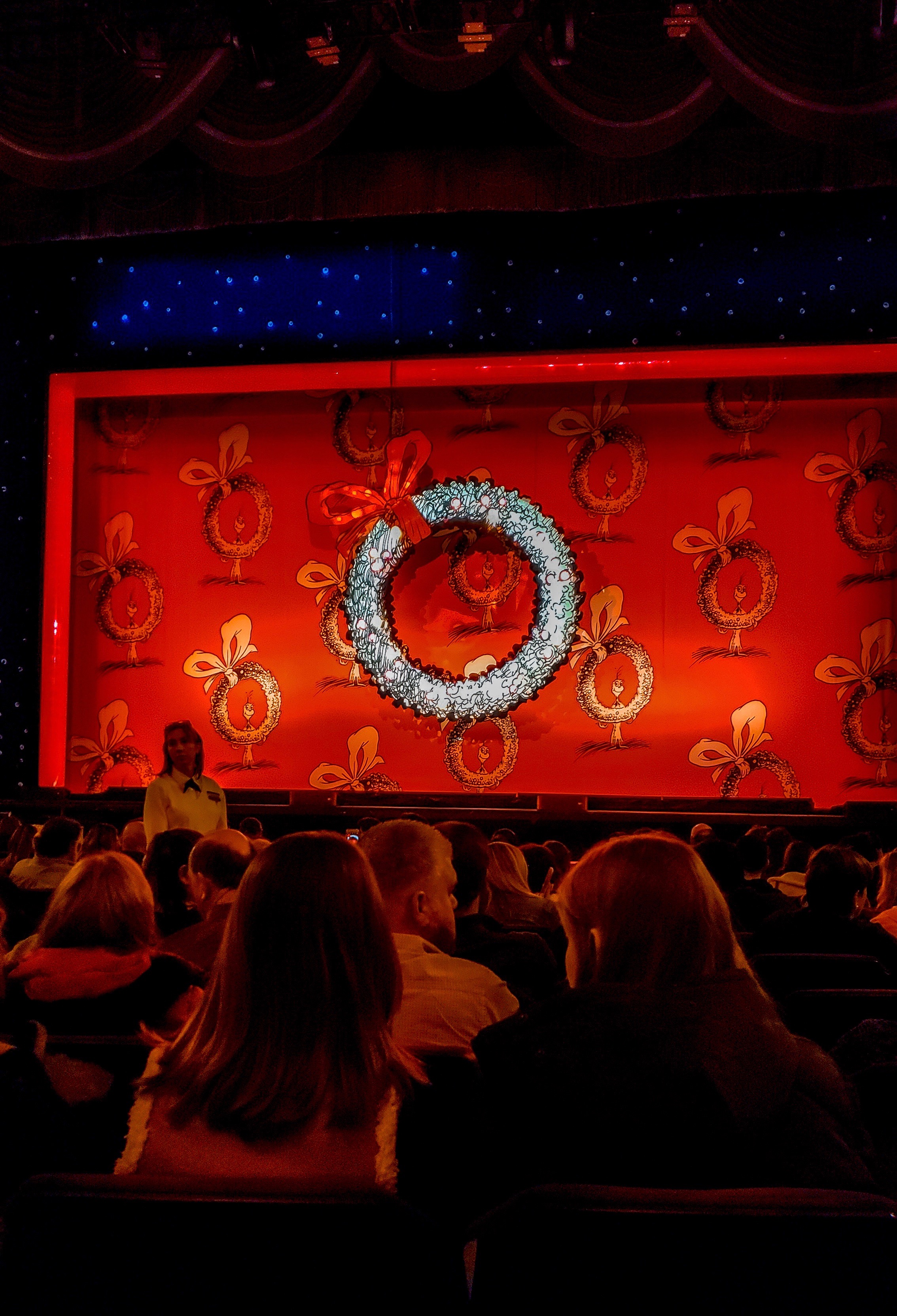 Dr. Seuss’ How the Grinch Stole Christmas! the Musical is playing at Providence Performing Arts Center December 17-22. There’s also a sensory-friendly performance in partnership with the Autism Project and TDF, on Saturday, December 21 at 11 a.m. Special pricing is available for the sensory-friendly performance, which features slight modifications, lowered house lights and sound levels. Standing and movement spaces are available, and there’s a designated quiet area in the lobby with skilled staff from the Autism Project. Guests can bring coping tools into the theater. Guests partaking in the sensory-friendly performance can save ten percent on mid-orchestra seating using the code CINDYLOU, or 25 percent on rear/side orchestra and 50 percent on First Dress Circle and Second Dress Circle seating using the code WHOVILLE. Regular performance prices range from $30 to $90 per person. Tickets can be purchased at the PPAC box office, online at ppacri.org and by phone at 401-421-2787.

Santa Claus is Coming to These 8 Spots