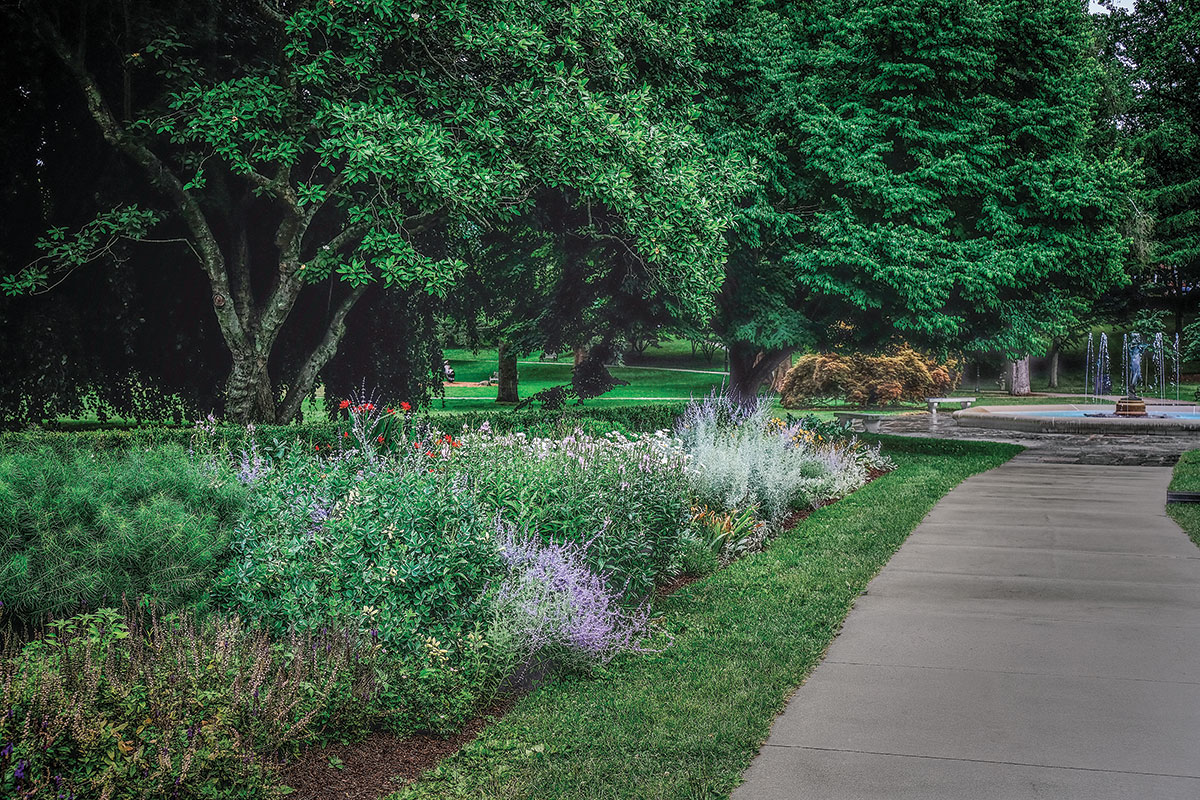 The perennial garden includes natives such as common milkweed, New England aster, penstemon and obedient plant. It is part of the native garden tours, which are given monthly in the park by master gardener volunteers. Photography by Chris Vaccaro.

Westerly has incredible beaches, but those duly acquainted with the diverse offerings of the state’s southernmost mainland town might argue that the shore isn’t its most glorious natural asset.

Nestled in the heart of downtown (it’s cliche but accurate) is Wilcox Park, which was first established in 1898 on a seven-acre parcel donated by Harriet Wilcox in memory of her husband. Warren H. Manning, the founding father of the American Society of Landscape Architects, designed the park and his intention was to keep the center open, a vision that persists today even though the park has since doubled in size. Managed by the Memorial and Library Association of Westerly, the public park is now a fourteen-acre rolling green space that boasts paved walkways, numerous gardens, a fountain, fish pond and monuments (there’s even a giant “Runaway Bunny” statue in homage to Margaret Wise Brown).

The master gardeners started volunteering in Wilcox Park in 2014. At that time, says master gardener Corliss Merkel, the native beds were in disrepair. 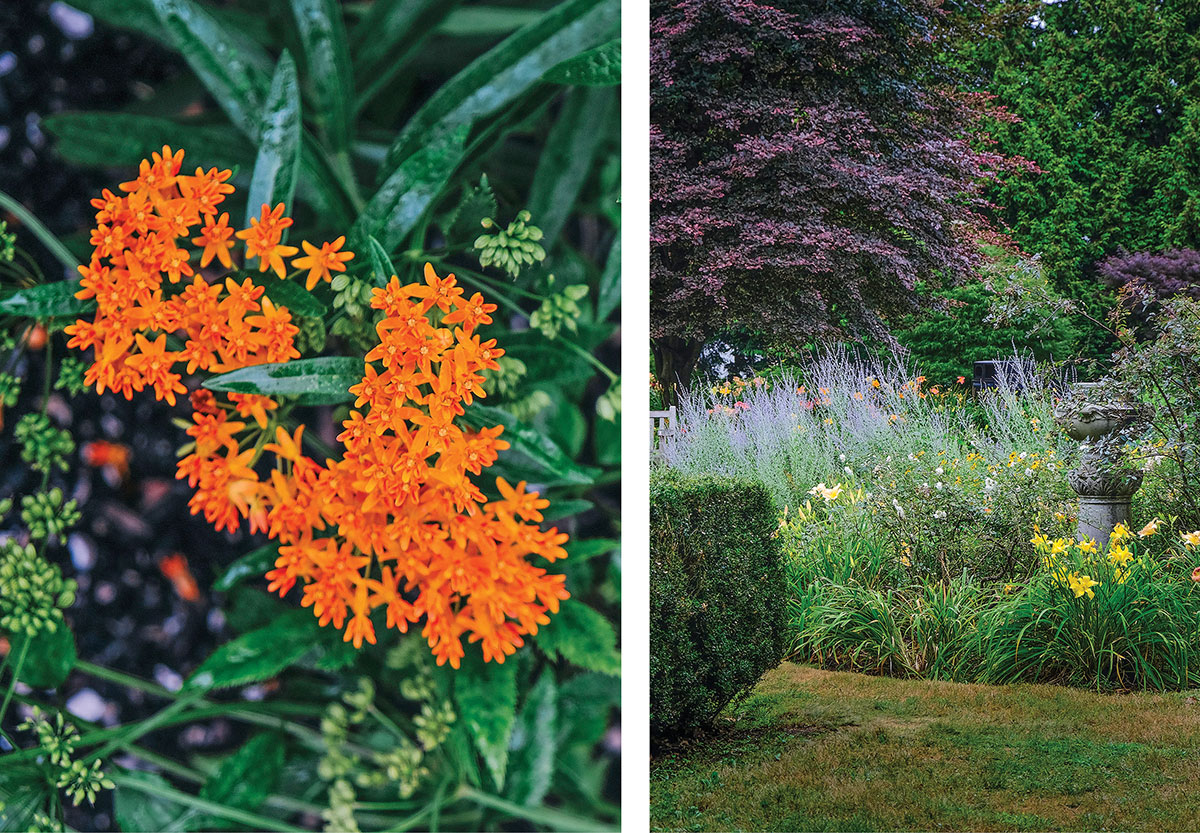 “When we started, we tried to make the native beds formal looking, one side a mirror image of the other side, and that lasted like a year,” she says. “They’re beautiful, but it’s very difficult to keep plants pristine like that.”

Adjusting the gardens to include more native species has been a goal of park superintendent Alan Peck and the master gardeners in recent years. “When we talk about natives, we mean things that would have been here before settlers arrived. They’re better for the insects, the birds and the animals that use the space,” Merkel says. Presently Wilcox Park has some plants and trees, such as the Norway maple, that are actually invasive. When those decline, she says park superintendent Alan Peck tries to plant more native varieties in their stead.

The master gardener volunteers started that first year in the native beds, believing they were limited to that area, but their reach has since sprawled. “The park operates on a shoestring,” says Merkel’s co-leader, fellow master gardener and park committee member Sandi Charmichael. “Now, working with Alan, we ask, ‘where’s the need?’ ” 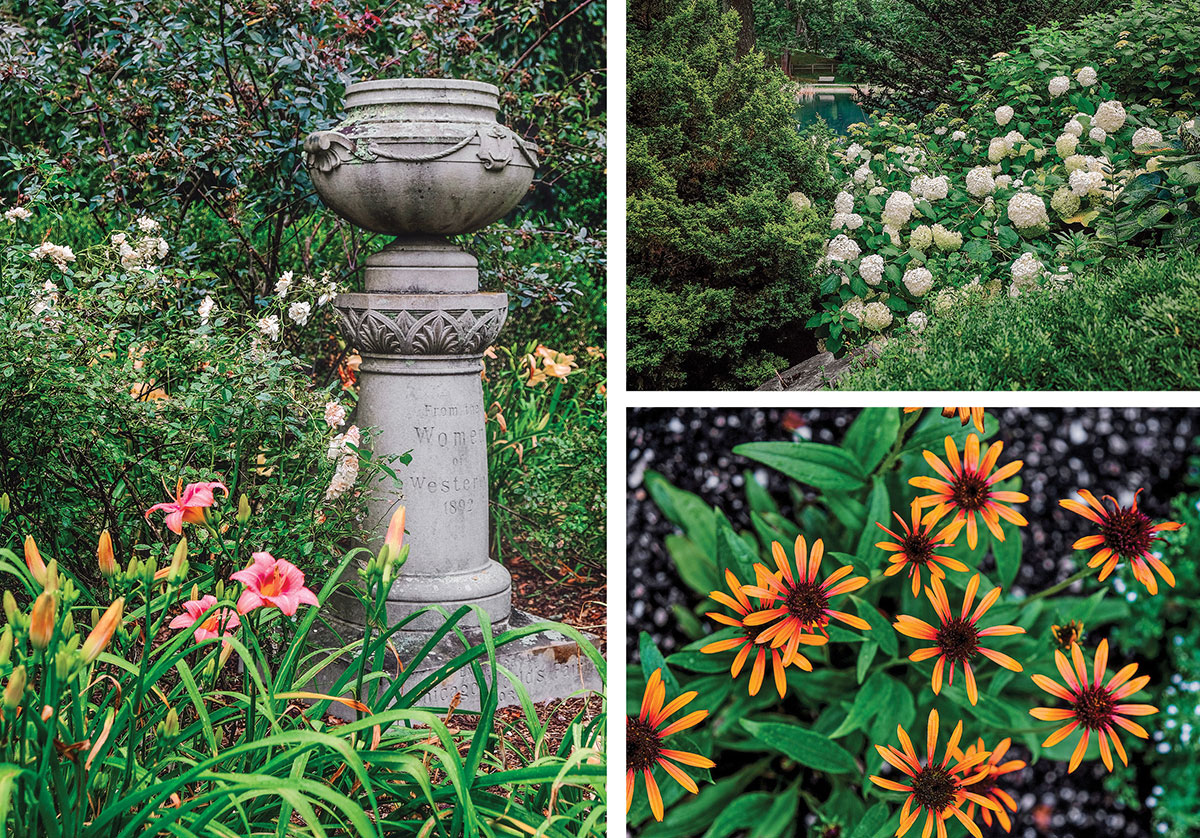 Left: The centerpiece of the perennial garden is the Women’s Monument, which was sculpted by the Smith Granite Company in 1892 to showcase Westerly granite. The Smith family lived in the Babcock-Smith house on Granite Street and developed and worked the quarries there for three generations. Right: A hydrangea and a flame thrower (Echinacea purpurea), a cultivar of the coneflower. Photography by Chris Vaccaro.

In addition to the native garden, the group has “tamed” the rain garden (“we used to call it the rainforest,” jokes Merkel) and most recently they installed a pollinator garden with grant funds through the New England Wildflower Society.

On the second and fourth Saturday of the month, from May through October, the master gardener volunteers offer tours of the park that highlight its various gardens and trees, ten of which are Champion trees, notes Charmichael.

In addition to the pollinator, native and rain gardens, visitors tour the Esplanade — a showy, more conventional garden featuring mostly daylilies — and the perennial garden.

“The perennial garden works through the use of several design techniques,” says Charmichael. First, the plants are given space to grow into their natural form. Next, there is a variety of foliage and forms: Tall plants add substance and lower ones edge the beds. Lastly, there is always something in bloom. “It makes good use of repetition, the key to garden design, by repeating plant varieties and echoing color.”