Over its lifetime, it defended the City by the Sea, crumbled with neglect and, now, is a hot spot attraction for history buffs.

So, you want to invade Fort Adams? It is most likely a bad idea. But let’s assume you have your orders and invade you must. You face your first important decision: by land or sea? If you’ve opted for the aquatic route, you’ve likely consigned yourself to a watery grave. The fort has a battery of artillery that can take out ships for miles around. And the walls are thick enough to take any damage a ship could muster. You would be underwater long before you manage to inflict any serious damage.

So now you’ve reconsidered; you’ll be attacking by land. You have a long and bloody journey ahead of you. The fort is on the tip of a peninsula, so you and your troops march the only direction you can: due south. Suddenly you’re bombarded by a hail of gunfire, but it’s not coming from the fort itself. 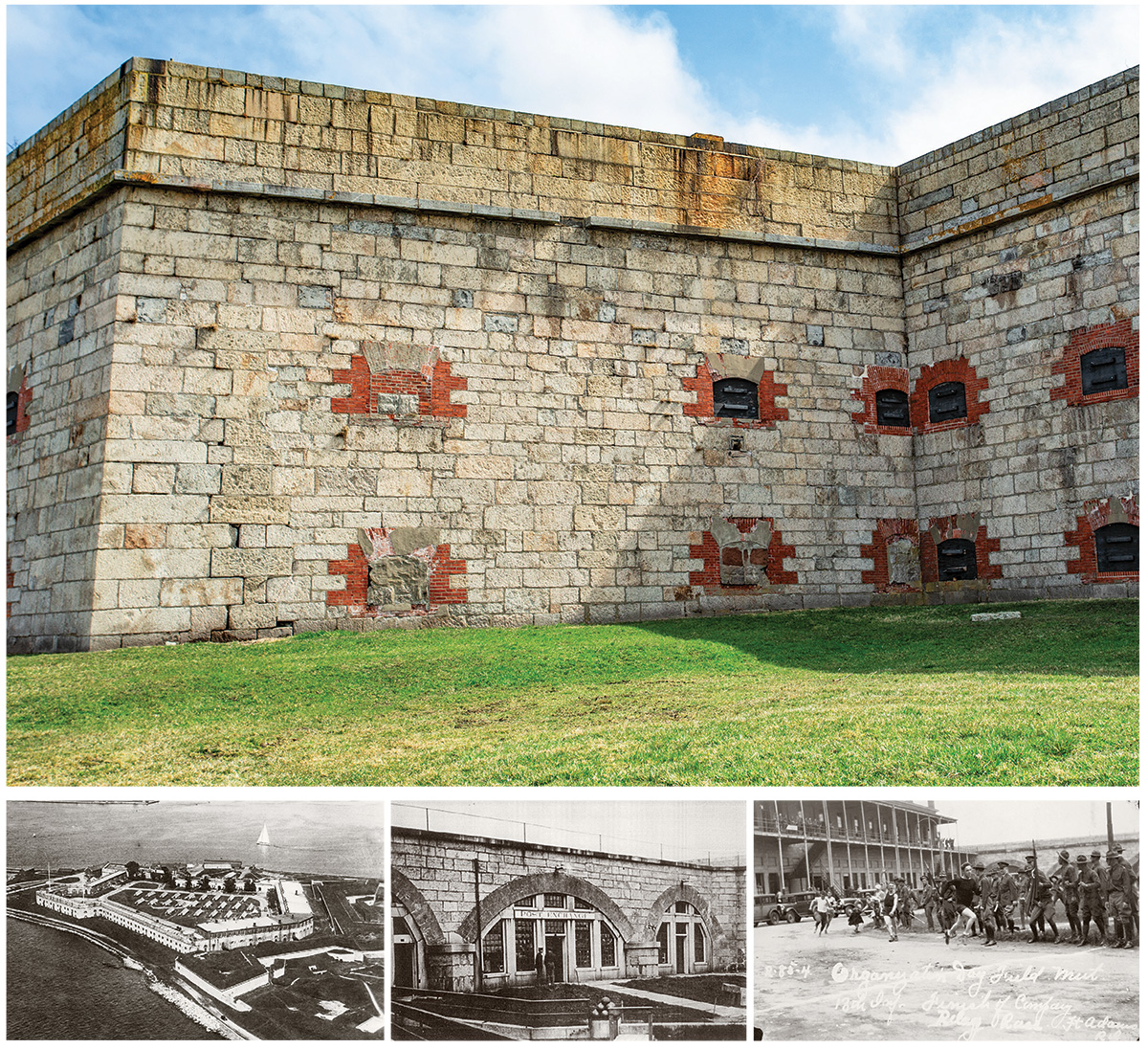 Half a mile inland and practically buried in the hillside is the fort’s redoubt, a building equipped with a dry moat, a drawbridge and a whole lot of firepower. After taking down the redoubt (no easy task), you and your troops keep marching. You approach an open field adjacent to the fort and are bombarded again, forcing you to dig trenches to get closer.

You finally make it to the outer defenses, but you no longer have the trenches for protection. You encounter obstacle after obstacle: ditches, high walls, huge doors, all the while being fired on from all sides by soldiers hidden throughout the walls of the fort’s defenses. You repeat this cycle several times: encounter obstacle, get shot at, encounter new obstacle, get shot at more. Maybe you get into the heart of the fort; maybe you realize some orders shouldn’t be obeyed. 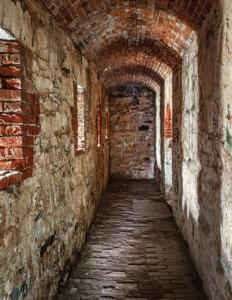 One of the stone listening tunnels that you can walk through
during a tour at Fort Adams. Photography by Chris Vaccaro.

Fort Adams, located in southern Newport, was a marvel of military engineering. Construction began in 1799 during John Adams’s presidency (hence the name), but the fort’s first iteration was largely inadequate. After the War of 1812, President Monroe recognized the country needed a better system of coastal defenses. He recruited a French engineer to realize his plans.

“The United States military just didn’t have the expertise in fort construction,” says Robert McCormack, director of visitor experience with the Fort Adams Trust. “They looked to France and hired Simon Bernard, and he designed Fort Adams and about forty other forts that go from Maine to the Florida Keys and a couple even out on the west coast.’

Bernard was a distinguished engineer and a decorated officer who served in the French army. After Napoleon escaped from exile in Elba and overthrew the newly installed French government, Bernard joined forces with him. Following Napoleon’s final defeat, Bernard was exiled from France and went on to find employment with the United States government.

One of the crown jewels of Bernard’s designs was Fort Adams, which, at the time of its construction, was the most complex fort in the entire country and was also the third largest. Built with several million bricks and tons of granite, and equipped with more than 400 cannons, the fort was a behemoth. It was also protected with layer after layer of carefully designed defenses. And every possible mode of entry was planned for: nautical, terrestrial and even subterranean.

“If push came to shove, the way that I would have attacked this fort would be to actually tunnel underground,” says McCormack. “What the enemy would try to do, as they’re digging their trenches, they would dig tunnels too. They would try to get to the foundation of the wall, set charges and then you could blow a hole in the wall.”

But even this mode of attack was anticipated. McCormack shows me into a gloomy building and passes me a flashlight. We walk through a damp stone tunnel, crouching slightly. The beams of light stretch down the passages and into blackness. We turn a corner, crouching even lower — this tour is not for the claustrophobic.

We make our way out of the tunnels and back into sunlight. McCormack points out the empty field in front of the fort: a seemingly unprotected blanket of land that is actually guarded by an underground network.

“It was so well designed, no one would attack. In fact, it never once had to fire a shot in anger,” he says.

But for all its brilliant innovations, the fort would quickly find itself outdated after its completion in 1857. By the end of the Civil War in 1865, advancements in gun design would render the fort far from impregnable. Fort Adams would spend the next century or so trying to catch up with the evermore sophisticated artillery. Whether the newest innovation was long-range ballistics or airplanes, the defenses of the fort were always a step behind. 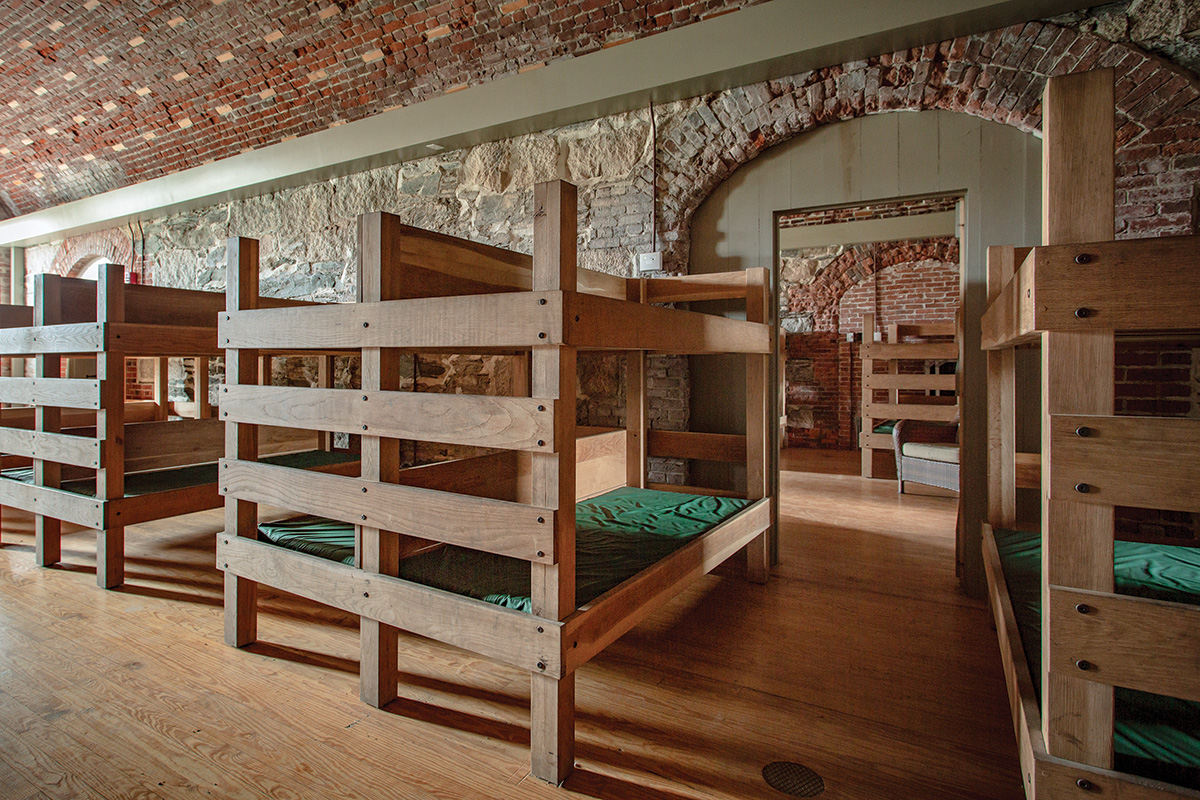 As the fort’s military prowess waned, it became a recreational favorite for soldiers. Nearby downtown Newport was a popular destination, but the fort itself had plenty of onsite entertainment. It was equipped with a bowling alley, a theater, a nine-hole golf course and hosted movie nights, dances and other social events. But even its recreational allure became moot when a fire swept through the complex, destroying a large swatch of the structure.

“It was a sailor in Newport harbor who saw the smoke and called the fort to alert them that they were on fire, but ultimately they just didn’t have the manpower to put that fire out,” McCormack says.

The complex fell into disuse and was eventually given over to the state in 1965. It was declared a historic landmark a decade later. But for many years, it was largely falling apart.

“The state didn’t really have the resources to adequately maintain, operate and run the fort,” McCormack says. “The Fort Adams Trust was founded in the mid ’90s, to help primarily with the restoration, but really to open the fort to the general public.”

Today, the fort has become a living part of Newport’s landscape. Home to popular events like the Newport Jazz Festival, it continues to be a part of the town’s history even as it’s being restored. Swarms of visitors come every summer for the events and tours alike.

And the best part? You don’t have to tunnel or evade cannonballs to get in.