We bravely explore the long-standing rivalry to find out which side of Narragansett Bay is better.

It may only take an hour to travel from one side of our little state to the other and yet we still manage to divide ourselves into regional tribes. Nothing gets things more fired up, though, than the competition between those of us who live on the east side of the bay, and those who live on the west. Just asking which towns constitute one side or the other gets people a bit chippy, but ultimately we went with a combination of conventional Rhody lore, our staffers’ opinions and local officialdom. (The East Bay Chamber of Commerce includes Seekonk, who knew?) One thing natives on both sides do have in common, though, is an almost force field-like resistance to venturing to the other side of the bay. (You mean I have to drive Across. The. Bridge??) Unfazed, we waded into this admittedly subjective grudge match to determine which side wins bragging rights. Here’s what we learned.

Why I’m a diehard East Bayer 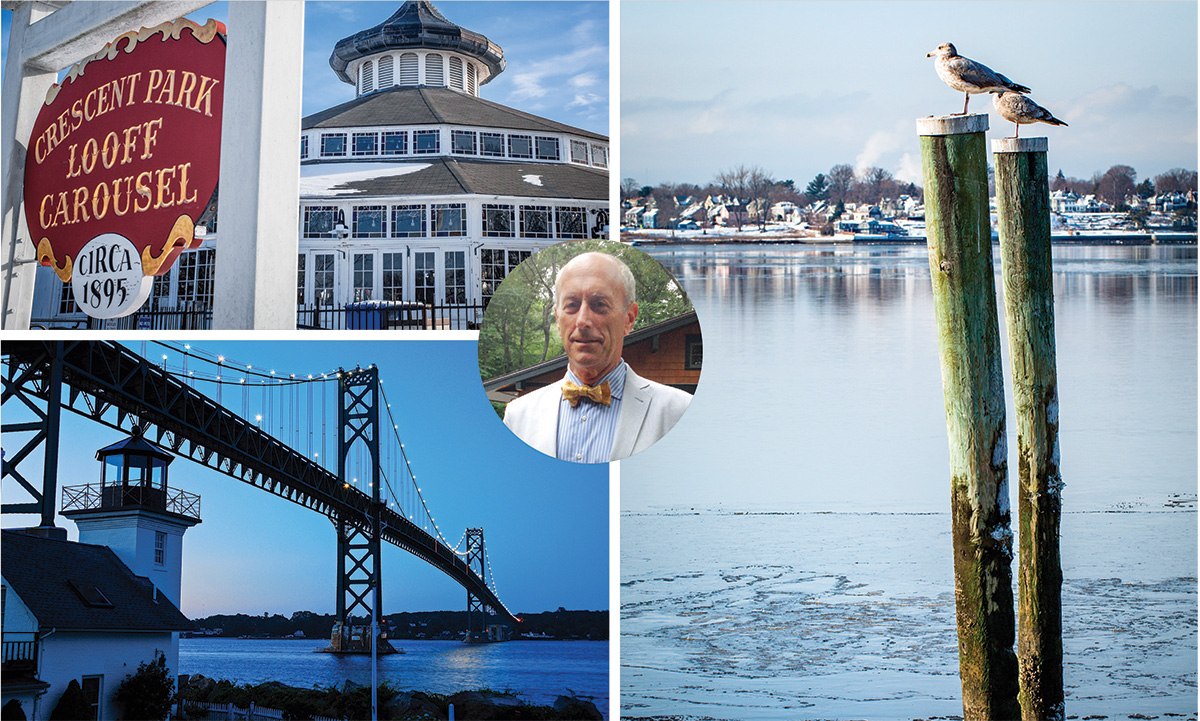 If not for a friend from the East Bay, I would have died as a kid on the West Bay.

I was born in Providence, raised in Seekonk hard by East Providence, and we’d go to Bonnet Shores where an Italian cousin had a summer cottage. One day at about age eight, while my Nonnie watched from the beach, I jumped beneath the waves and sank like a stone. Gulping water, I distinctly remember looking up to the surface and panicking.

Hands grabbed me and pulled me out: It was Stevie, a Seekonk friend we’d brought along. He dragged me ashore and, sputtering and scared, I stumbled into my frantic grandmother’s arms to be alternately tearfully hugged and screamed at in Italian.

Virtually my entire family lived in East Providence and, to them, Seekonk was “the country.” They loved coming to our house in the ’burbs, where lawns, crickets and quiet streets were as common to us as paved yards, screaming sirens and crowded neighborhoods were to them. My Auntie Annie, a first-generation Italian-American and a classic Black Widow for dressing darkly head to toe after her husband died, would gleefully dig up our dandelion greens to take home for salad.

We’d visit East Providence as well, Uncle Joe and Auntie Alice in Riverside, Uncle Alvie and Aunt Huguette in Rumford (they met in France in World War II), Auntie Eva, Auntie Emma…you get the relative picture. Some family lived in Warwick and Providence, and we’d visit them of course, but my life was largely confined to the East Bay.

And that was good enough for me.

Being Italian, our go-to place was Asquino’s on North Broadway. I loved every bite of pasta even as I contended with pincer-fingered Italian waitresses tweaking my cheeks and marveling over how big I was getting. We ate out a lot more than most of my friends, my dad never letting us forget how lucky we were for that. Mostly, we’d confine our gastronomic outings to places like the Palms right over the Seekonk-East Providence line where we’d go for pizza. Sitting in the ghoulish green glow of the cheesy iconic neon palm trees, I thought it was fine dining at its Rhode Island best. Better, even, than the rare foray to the West Bay to eat prime rib at Valle’s by T.F. Green.

Chinese food meant Young China restaurant on Warren Avenue, where Dad always got egg foo yung (the name always making me giggle) and I got the hamburger plate smothered in gooey brown gravy and overcooked onions. I checked it out recently; it was shut down, under new ownership, a sign promising renovations. I peered through cloudy windows at the rows of beat-up booths and worn blue plastic seating inside looking exactly as it did when my family ate there. I bet they served egg foo yung and hamburger plates right to the bitter end.

Say what you will, West Bayers, about your beloved Rocky Point, an admittedly fantastic place with some rides always making me toss my cookies. But we had Crescent Park, where in addition to neck-snapping and stomach-churning attractions like the Whip and the Flying Fish, there was our very own sprawling shore dinner hall overlooking the bay. Rocky Point was Rocky Point, but only Crescent Park across the water was dubbed “The Coney Island of New England.” Take that, West Bay.

Speaking of parks, they had Goddard, but our green gem was Colt State in Bristol where as a Vietnam-era Roger Williams College student, I would sit reading The Greening of America, dubbed a “paean of the counterculture of the ’60s,” my young liberal mind devouring every revolutionary word, concept, ideal and virtue.

And forget the Iway on the highway to the West Bay; I’ll take the lovely and long-lost rickety old Red Bridge, gateway to E.P., and the quaint Mount Hope Bridge any day. The Tent in Warwick? Big names, big money; in Pawtucket, we had the Edge and January’s, and in E.P., Bovi’s Tavern, local bands, cheap cover and drinks. Who’d want to fight the vehicular nightmare of Route 95 when we had a literal demolition derby at Seekonk Speedway? The monstrous Warwick and Midland malls? Fuggetaboutit, we had the compact and cozy Wampanoag Mall in E.P., where Almacs rolled your groceries outside on a conveyor belt for your mom to load into the family wagon.

My East Bay love is deeply personal: My Nonno lived in East Providence, working for years at Butler Chevrolet and then bartending at the Town Pub at Four Corners — owned by my dad, a place richly redolent of booze and smoke, an aroma I will never forget. Dad also once had a restaurant, the Chicken Roost in downtown Providence, and briefly had a sister location in Rumford. I loved them all.

“Never the twain shall meet,” Rudyard Kipling famously wrote of East and West. I almost died on the West Bay, if not for a friend from the East Bay — where my memories are and heart will forever be.

Why I’m a diehard West Bayer 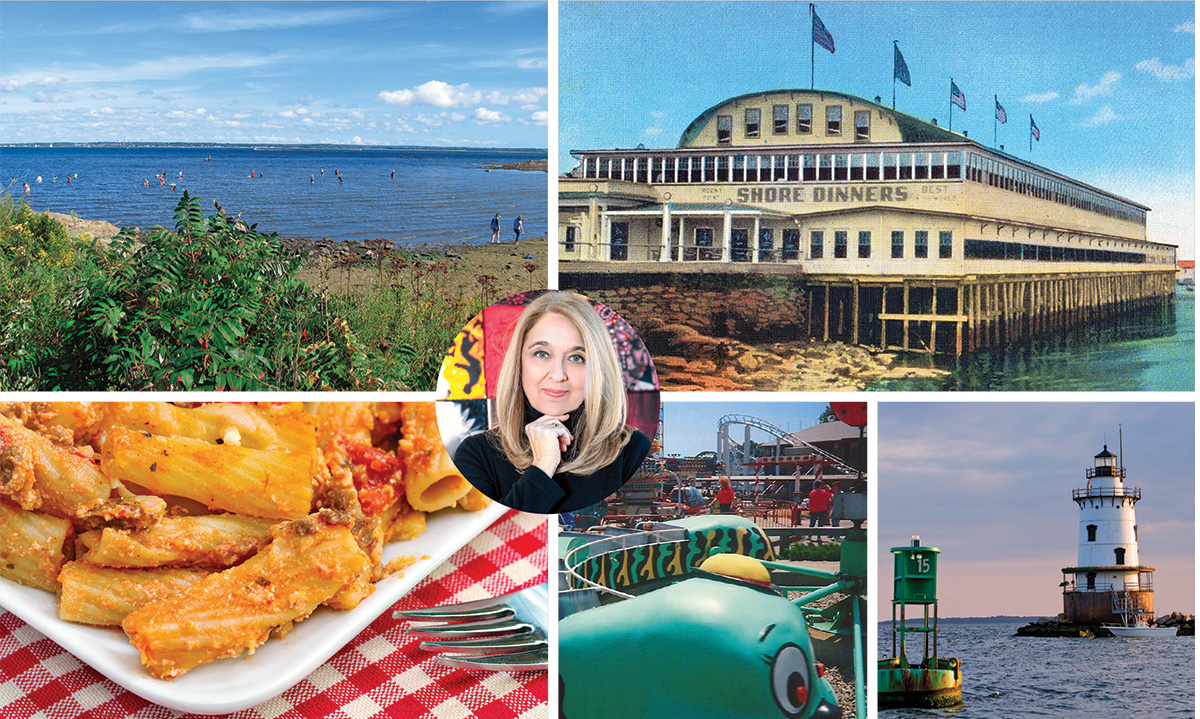 It was the scandal of 1984. Cousin Gina and her fiance, Vinny, were getting married. At the Stone Bridge Inn. In Tiverton.

“Tiverton?” one of the aunts gasped. “That’s so far away!”

For the record, it’s thirty-four miles from West Warwick to Tiverton. But for my family, firmly rooted in the Natick section of town for more than 100 years, Gina might have been getting married in Timbuktu. We were not a family that went to Tiverton. Or anywhere in that other bay — the East Bay.

My mother grabbed my arm a little too hard. As the maid of honor, I was somehow implicated in the scandal.

“Do we have to go over a bridge?” she hissed.

Honestly, I had no idea. I was living in New York City then, and working as an international flight attendant. I navigated the Underground in London, the ancient marketplace in Cairo, the steep steps of the Agora in Athens. But Tiverton? I wasn’t even sure it was in Rhode Island until Gina assured me it was. “Our family is not going to drive to Massachusetts,” she said. Apparently, they weren’t too keen on driving to the East Bay either.

“What’s wrong with the Club 400?” everybody wondered.

The Club 400, right off Providence Street in West Warwick, was where we got married. They had whiskey sour fountains, ziti and baked chicken. Even better, they were right there in town. If it weren’t for our dyed to match high heels, we could have walked to the Club 400.

“She thinks she’s too good for the Club 400?” the nastiest aunt said.

Not exactly. She just wanted to be different. There would be a gazebo for photographs and turkey instead of chicken and bridesmaids in huckleberry gowns and the bay sparkling right out the window as we ate and danced. Unfortunately, it was the wrong bay. The East one.

The first time I learned that there was another bay, I was a sophomore in college. I know, I know. With a state so small, how could I not even know about almost half of it? What can I say? I’m a Rhode Islander. We stay close to home.
One of my sorority sisters said as off handedly as if I heard such things every day, “I’m going to our house in Little Compton this weekend.”

The other girls, from New York or western Massachusetts or Bristol (also in the East Bay! Who knew?) acted like that was a normal place to go for the weekend. Little Compton. It sounded vaguely British, charming, definitely not like it was in Rhode Island.

I made the mistake of asking where Little Compton was, and everyone laughed.

“I thought you were from here,” one of the New Yorkers said.

I was from here. But here was West Warwick, Warwick, Cranston, East Greenwich. My entire life had been spent on the west side of Narragansett Bay. When I was a teenager, I went to the Warwick Mall every Saturday. We went to Rocky Point, Wein-O-Rama on Oaklawn Avenue for hot weiners, the Kent Cinema to watch movies.

My friend was explaining that Little Compton was near Tiverton which was near Middletown which was near Warren, and to me it sounded like she was describing the geography of a foreign country. It had never even occurred to me that anything lay on the other side of Narragansett Bay. And even though I heard about these mysterious towns that day back in 1976, with the exception of Cousin Gina’s wedding at the Stonebridge Inn in Tiverton, it would be almost twenty-five years later before I really discovered the East Bay.

After my daughter Grace died, everything familiar broke my heart. So when a friend told me to learn to knit, and pressed the name of a woman (Jen) and a knitting store (Sakonnet Purls) in Tiverton into my hands, I was in my car and on Route 195 before you could say Narragansett Bay. It was October, and the leaves were at their showing off best. By the time I was navigating the curves of Main Road, I had fallen in love. On my right, the bay sparkled. On my left, old stone walls and eighteenth century farms. There were patches filled with pumpkins. There were apples for sale. It was like driving into a postcard, everything beautiful and perfect.

As much as I like my hometown, and love the aluminum sided house where three generations lived until my mom died last year, the towns where I spent most of my life were not beautiful. We had mills, and a polluted river, and shopping malls and plats made up of tiny ranch houses. Later, we had big box stores and fast food restaurants and traffic on Route 2. This is not to say that any of this was terrible. My roots are in those malls and plats and mills. Even now when I drive down Route 2 I am so filled with nostalgia that I sometimes actually cry.

But I fell for those farms spilling down to the bay. I fell for the grapenut ice cream at Gray’s and the stand at Four Corners and the beaches with names like Fogland and Goosewing. I am not proud of this, but I am a traitor. I dream of a house perched beside the waters of, yes, the East Bay. Luckily, all of my aunts involved in the Scandal of 1984 have long since passed away. Surely, they would never visit me there.