From the same chef-owners who brought us Bacaro, Otra in Providence spotlights Spanish and Portuguese cooking. 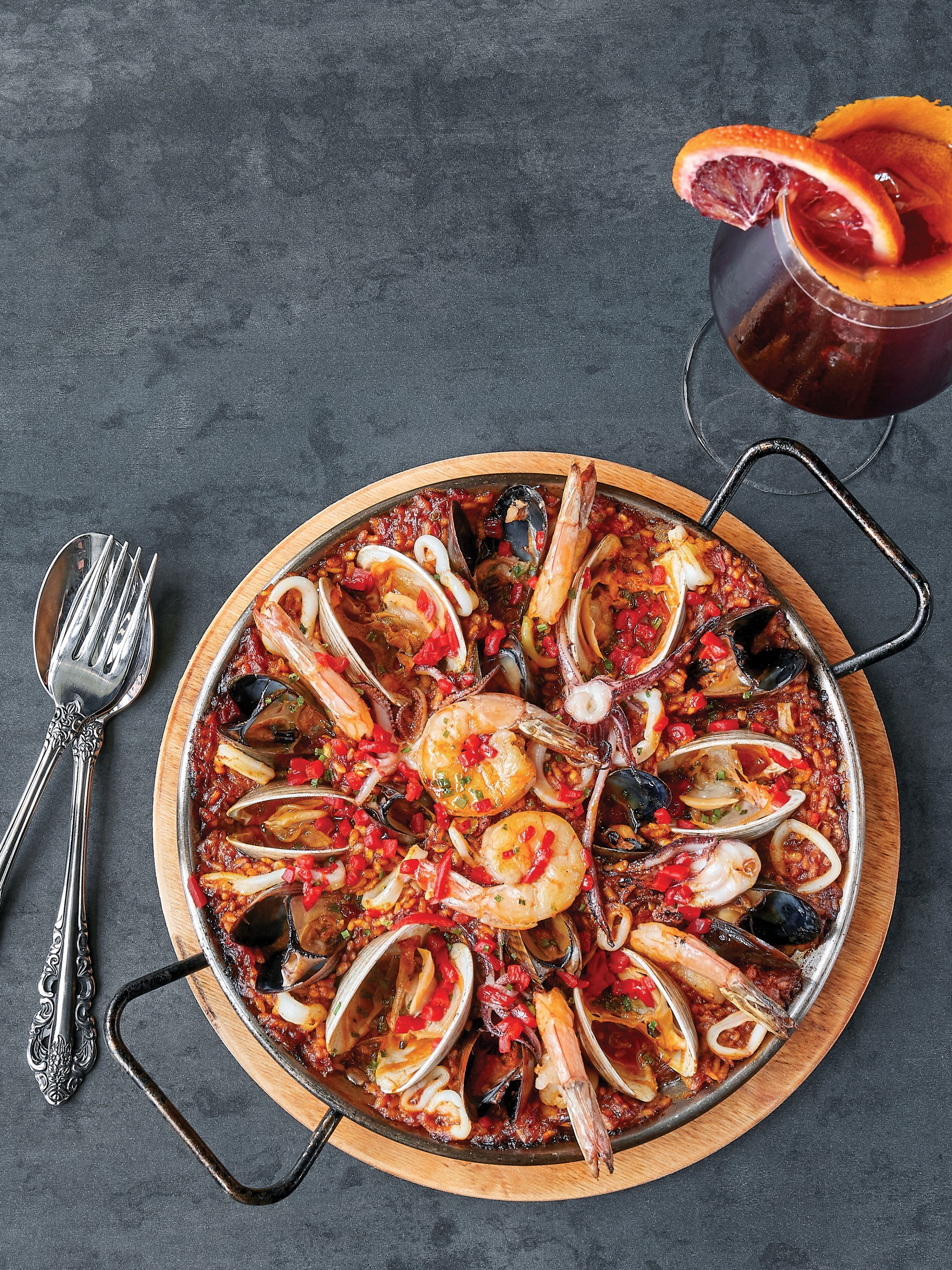 There are notable similarities between the Iberian Peninsula and the promontory we call Italy: a love of cheese and cured hams, a deep commitment to wine culture, and an unflagging sense that the area’s food will transport you to a region saturated in the richness of heritage. So perhaps it’s not surprising that Brian Kingsford and Jennifer Matta — the chef-owners of Bacaro — would commit themselves to a translation of Barcelonian and Portuguese culinary life.

Located next door to their first restaurant, Otra (which means “other” or “another” in Spanish) is an altogether different space, though the two restaurants share an adjacent parking lot. Where Bacaro sprawls through two floors, Otra manifests an urbane intimacy. The renovation of its building — originally a nineteenth century firehouse — is an homage both to history and to Spain. Two immense arched windows mimic the firehouse’s engine doors, but the interior is a world unto itself. The dining room surrounds an expansive twenty-person bar cut from white marble and centered around illuminated shelving. The burnt ochre-hued seating grounds the sky-high ceiling in an earthy aesthetic, but it’s the staff — chiefly Bacaro veterans — who manifest Kingsford’s admiration for a cuisine that is as varied as it is precise. 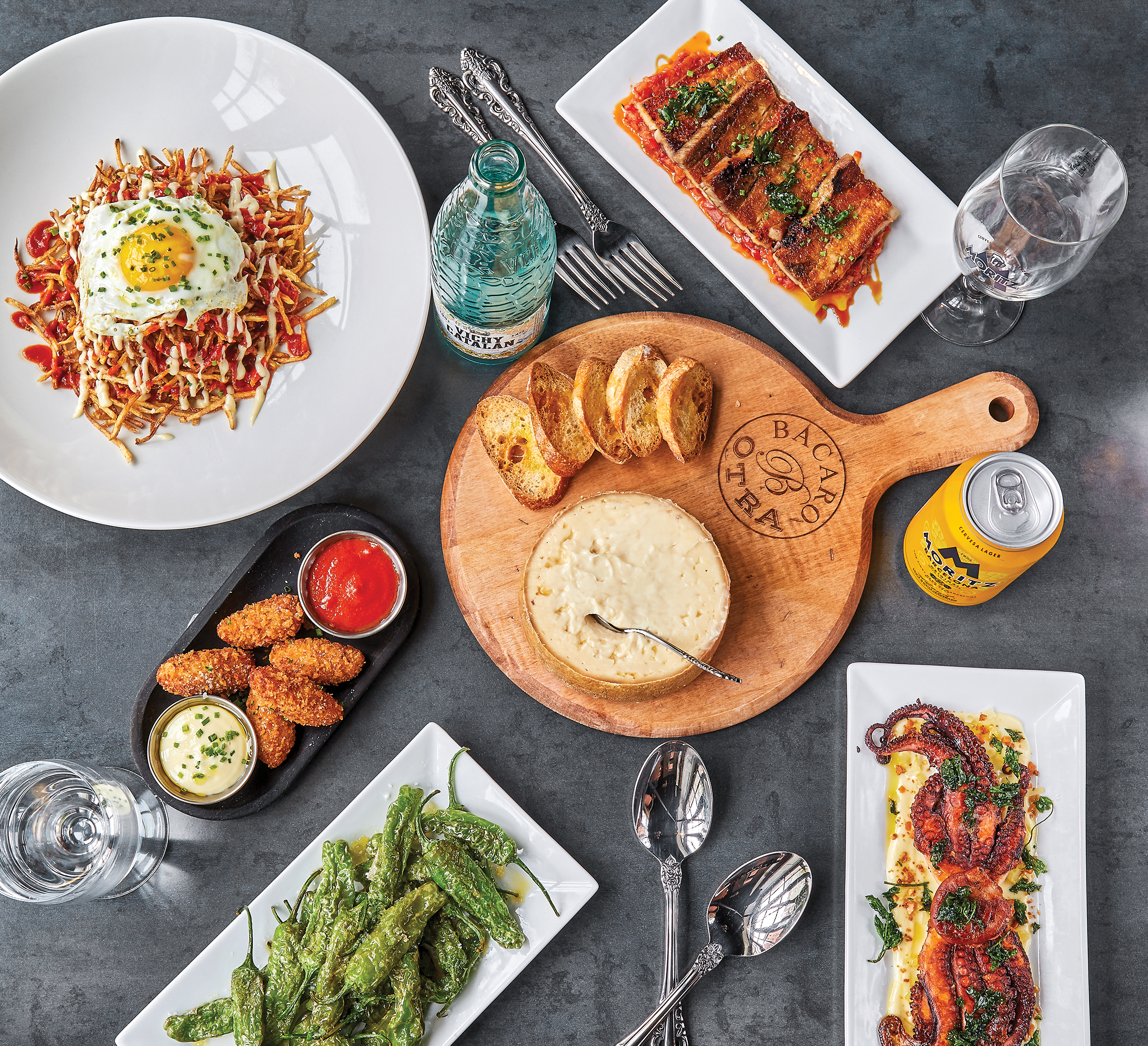 Love of Italian food is ubiquitous in Rhode Island; every town in the state has its Venetian, Roman or Neapolitan outpost. Even at Bacaro — with its exacting perspective on Italian fare — customers need little guidance finding their niche. At Otra, on the other hand, servers and other staff accept their responsibility as tour guides with reverence for the mountains, the Mediterranean and the distinct confluence of cultures from Barcelona, the southern French Pyrenees region and Portugal.

Meals begin with an explanation of the restaurant’s mother sauces: romesco (almond, tomato and pepper), lemon aioli, bravas (chili and vinegar-tinged tomato sauce) and piperade (tomato and piquillo pepper relish). They’re paired with the restaurant’s a la plancha dishes: a series of shellfish options, meats, fish and vegetables seared on a smoldering Spanish plancha, a stainless steel griddle. But the experience of Otra often starts before anything is ordered — as soon as a collection of house snacks featuring Spanish flavors is placed down. A handful of garlic Marcona almonds, a selection of olives and a small bowl of housemade lactonese, a light aioli made with milk and garlic, arrive with freshly baked bread and it’s here that the sauce takes center stage. Everything about the stark white lactonese suggests innocuousness, but it delivers a declaration of heady garlic so rousing as to recall, in a single bite, the Spanish sun and an array of European dinners that commence hours after it’s gone down. 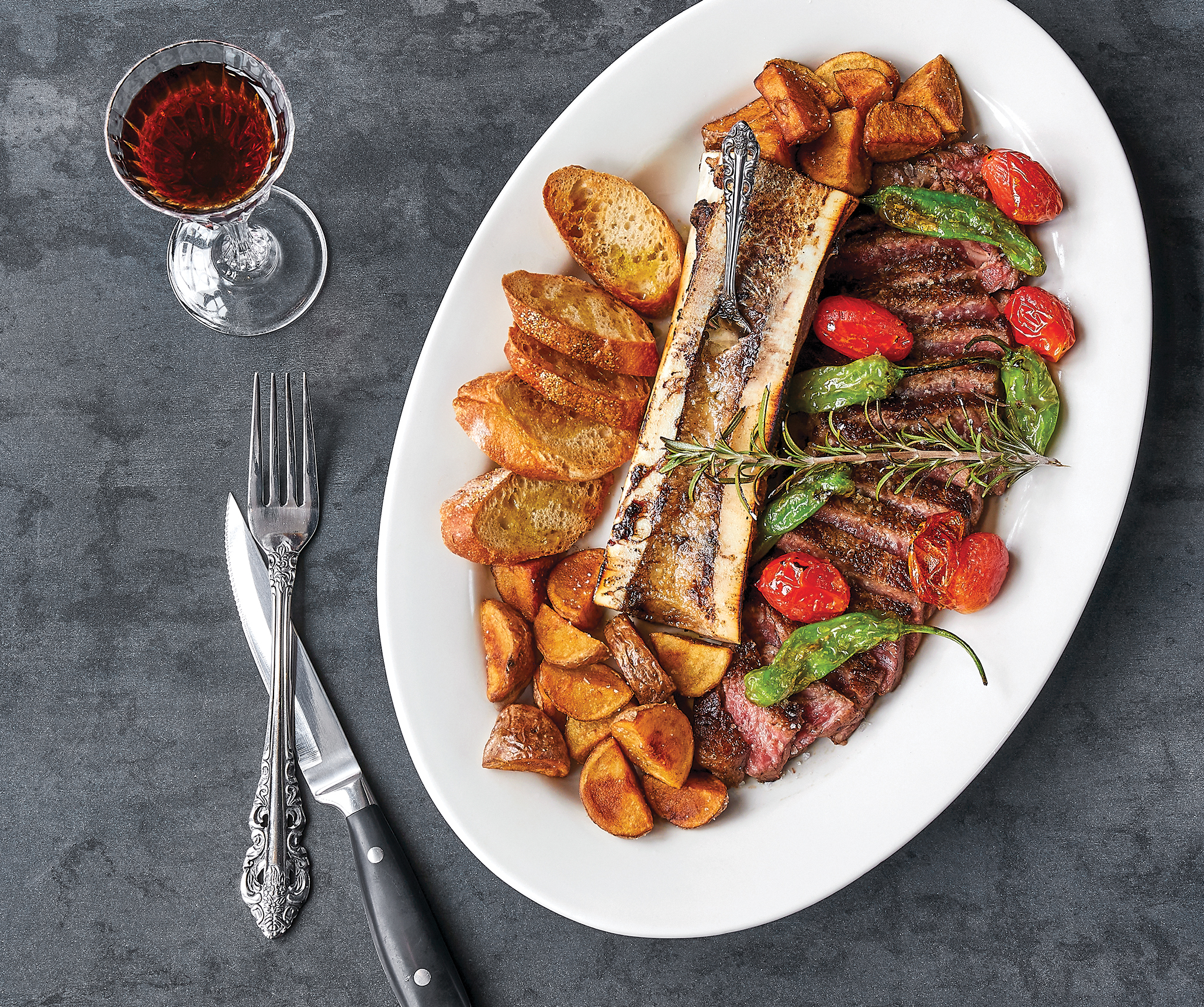 Otra offers hot and cold tapas in the same manner Bacaro does — patrons mark off orders on a paper menu — though the options have been culled to principal dishes. Slices of jamon Serrano, salchichon de bellota Iberico, Manchego and Idiazabel are enough to entertain drinkers at the bar, which is a world unto itself. But the surprising thing about Otra is that the theatrics lie in its large plates, rather than the revolving pintxos (tapas served on a stick), montaditos (served on toasted bread) and bocadillos (small sandwiches).

This is also where the serving staff proves invaluable, offering not only earnest glee at the start of a meal (“I know what’s coming and I couldn’t be more excited for you!”) but a plan for the evening that hits as many wide-ranging notes as possible. There are common threads that run through the menu — shellfish, rice, potatoes — but there are also dishes defined by wild abandon. Housemade potato chips are plated with crystallized wildflower honey and a shower of fresh cracked black pepper ($8), a timeless rendition of hot honey before it became vogue. Huevos cabreados (translation is smashed eggs, $12) — a plate of shoestring fries with spicy tomato sauce and a soft fried egg — is a madman’s creation that interrupts the grandeur of the soaring space with unpretentious hedonism. Tossed tableside, it’s a memoried whiff of Tini’s hot sauce and aioli fries, circa 2013. There’s nothing small about this plate, though; it’s a platter of what you might find in a Granadan fridge at 2 a.m., and it’s so good that the host and several servers will walk by in slow motion to nod their head in approval. It’s also proof that, while Otra’s glamour is evident — in its hues of lush gray-black and polished white — Kingsford’s kitchen is forever hearth-oriented.

This is most evident in the restaurant’s large plates, which range from $30 to $45 but hit the table like the Ramsay’s tureen of beef daube: full of evocation and the promise of a long night spent in conversation. Slabs of sirloin steak come with rustic slices of potato or with roasted marrow ($40), each vying for the top prize in indulgence. But the soul of this restaurant comes in a casserole: paella de marisco simmering in lobster stock ($40), duck confit nestled in white beans and jamon ($35), littlenecks sidling up to Toulouse sausage and white wine ($35). Every pan arrives at the table hot from the fire and, if it looks simple, that’s a hoax of wafting smoke. These are stews created in layers that carry the history of a culture reliant on such a range of people and topography that nuance becomes the very backbone of the dish. Casual, here, is as complex as it gets. 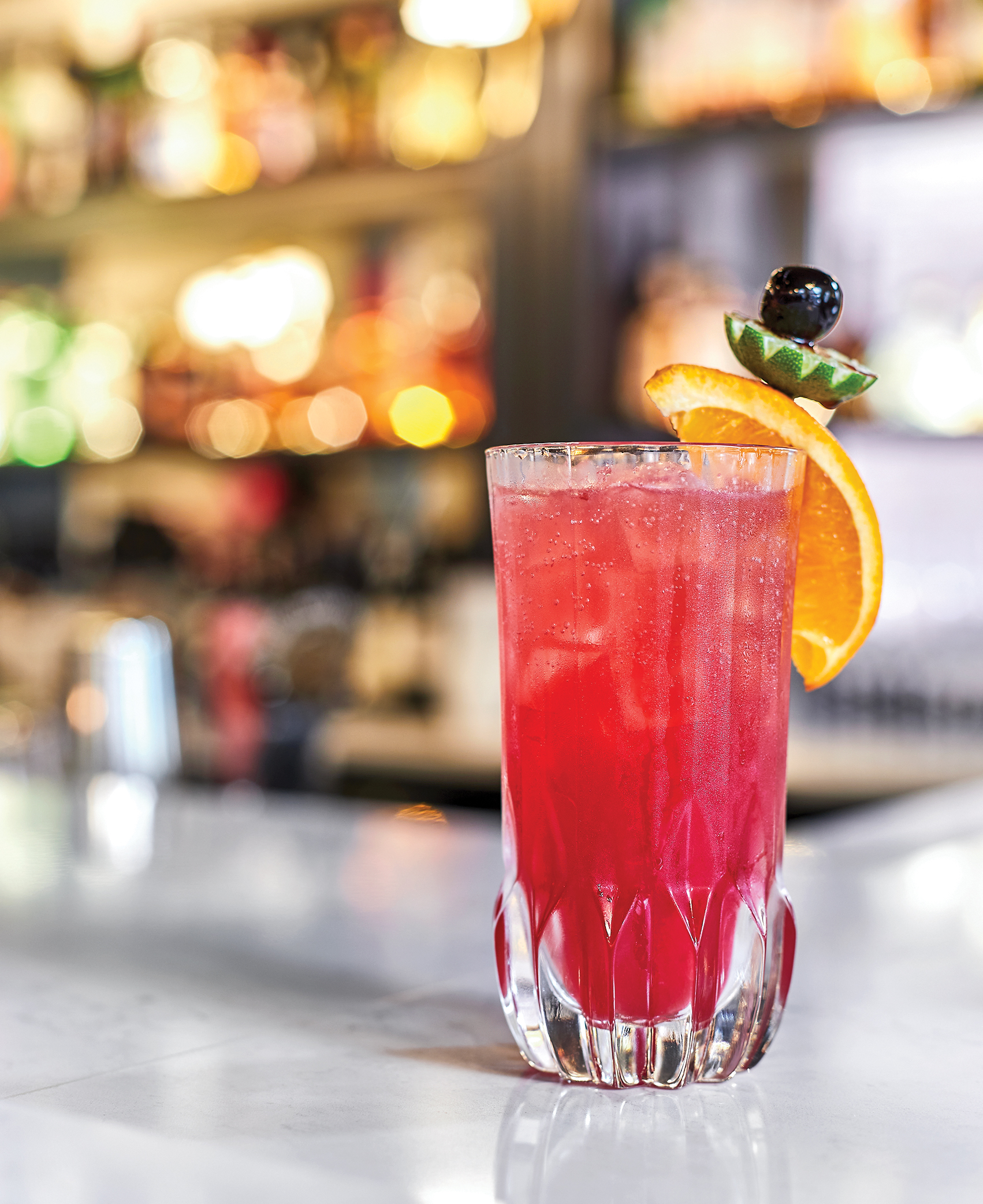 That’s not to say Otra doesn’t have a side that simply loves a party. Shimmying through a tight space of storytelling patrons, one indefatigable server said, “Just call me Shakira! The drinks are coming through one way or another!” The easy option is just to stick to the bar — its own minute city — drinking your way into dessert which also lingers in intoxication. Flan is topped with housemade burnt orange marmalade and, if you’re full of paella, the blood orange ice drenched in cava interprets a Venetian classic called sgroppino, an Italian sparkling white wine mixed with fresh lemon granita or lemon sorbetto. The palate cleanser is like a liquored-up slushie in a martini glass. Don’t be surprised if your server offers another wave of validation if you choose it: The fine line between debauchery and refinement is the one everyone at Otra is looking to walk.

Perhaps the biggest accomplishment here is that this restaurant feels nothing like its older sibling, nor does it incite competition. The space is singular, the inspiration distinctive, and even the diners are changed after a meal. Eventually the massive doors will close for the evening, but Spain and Portugal linger in the mind long after. So much so that you may, temporarily, forget Italy altogether. 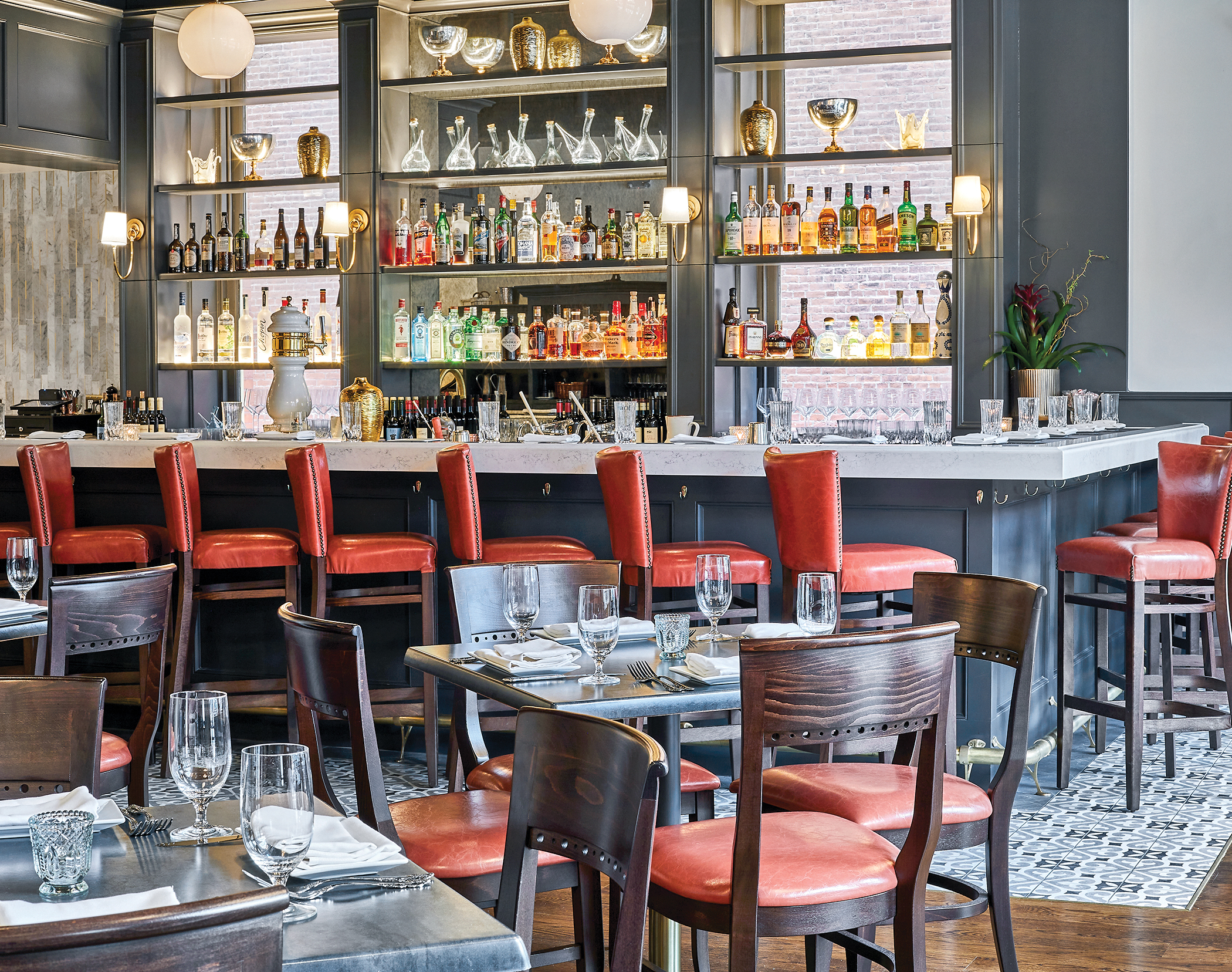 Karen’s picks: Huevos cabreados, bife a casa, anything stewed or simmered. The bar never gets old.