This Newport newcomer updates simple Italian cooking to create dishes that are both satisfying and inspiring. 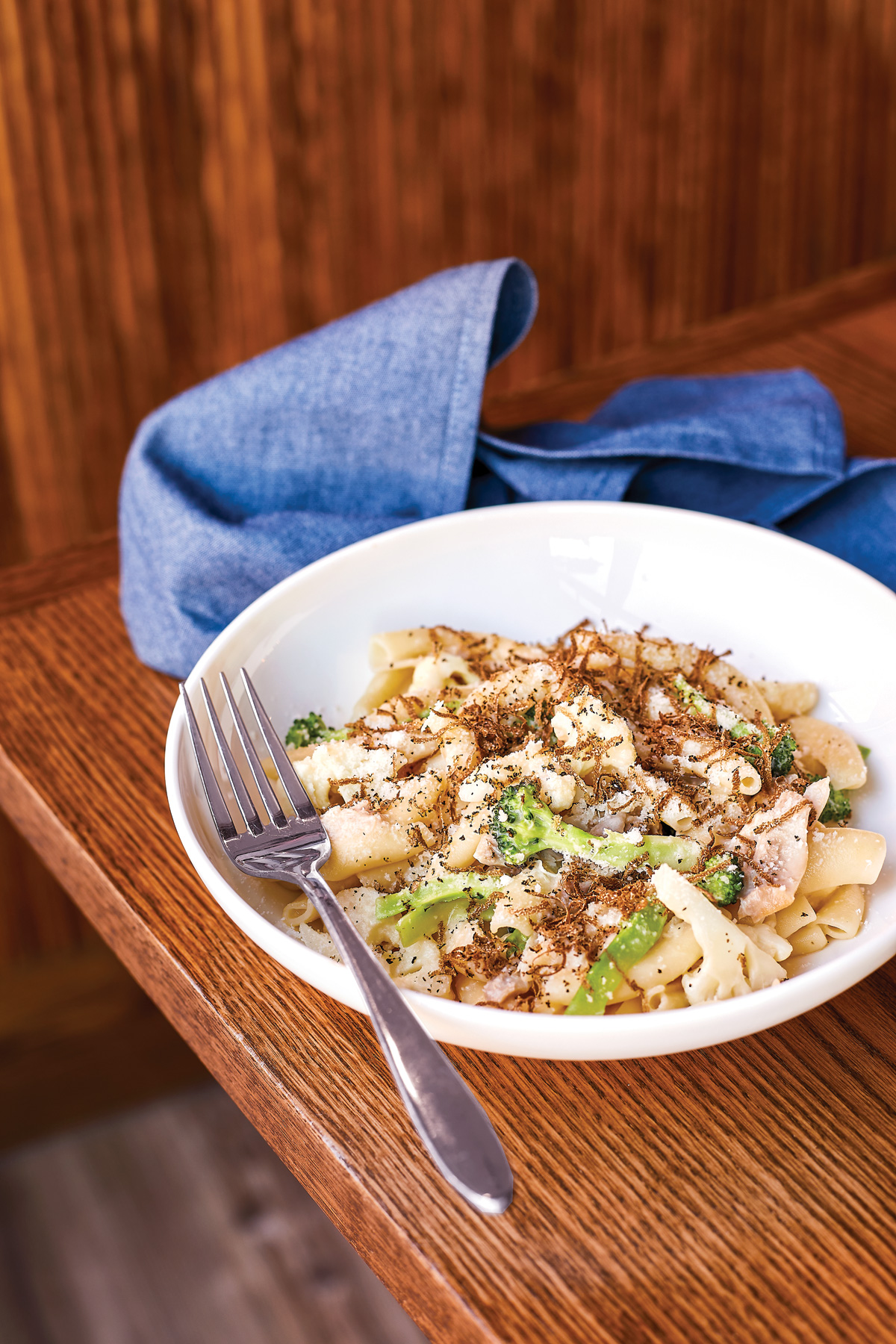 The word “freestyle” is thrown around a lot in reference to Giusto. It’s a term that allows chef-owner Kevin O’Donnell some liberties in a traditional Italian kitchen, as well as a marketing tool to announce something unexpected. It’s not entirely accurate though. Giusto is unexpected if you’re comparing it to Federal Hill but there’s nothing on the menu that suggests O’Donnell is making
it up as he goes along. Quite the contrary. This is a well-oiled machine from conception to execution and, if it occasionally presents itself as a simple snapshot of pastoral Italy, it’s only to hide the gears and engines in the open kitchen.

Location alone would tell you that this was years in the planning: tucked into the ground floor of the Hammetts Hotel, Giusto faces the Newport bustle on one side, the marina on the other and a vast patio adorned with reams of string lights in between. If the setting is over-the-top, the interior leans toward minimalism with the exception of a single hand-drawn wall of octopuses. The dining room straddles sleek Scandinavian and mid-century, most seats flanking the kitchen to await the setting sun. The view never disappoints, bathing the restaurant in hues of blue and evening orange until the restaurant separates itself entirely from its dramatic surroundings. 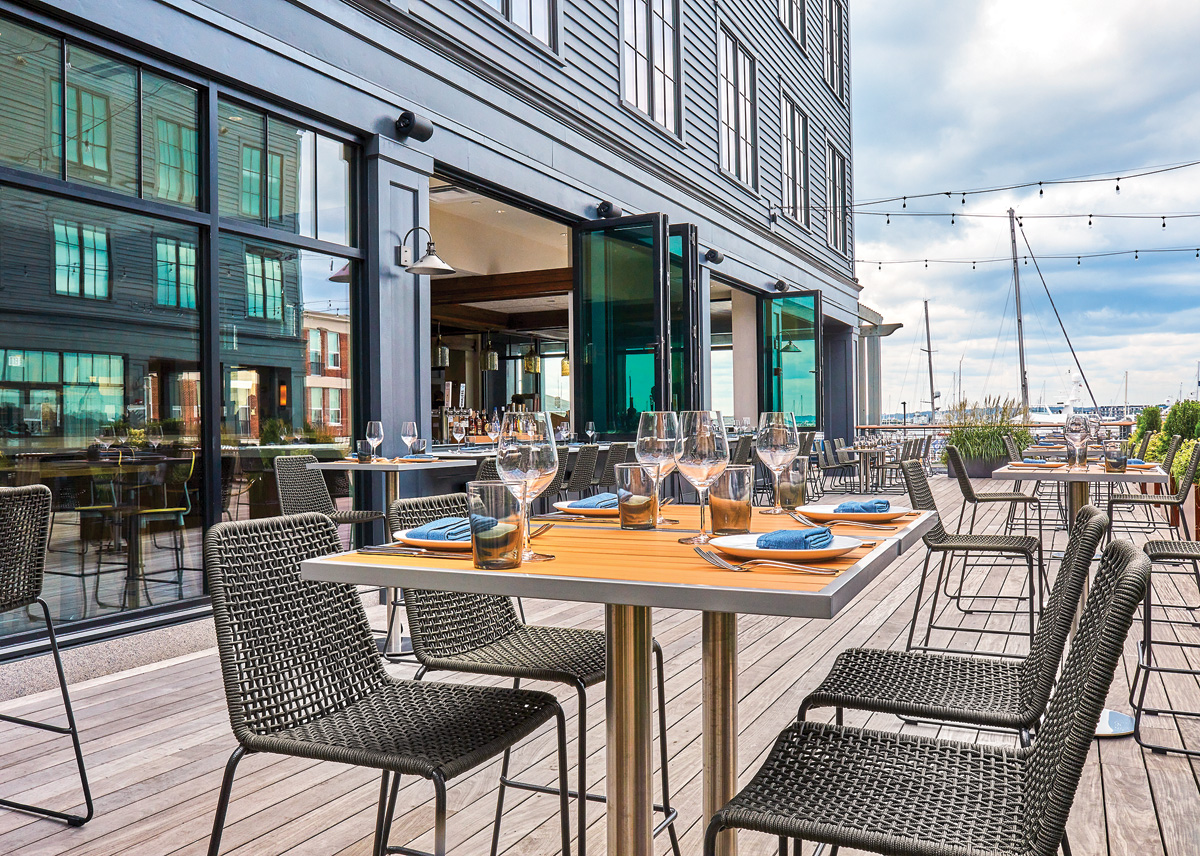 All the better given that O’Donnell’s food deserves attention. Despite his protestations that this is off-the-cuff, the kitchen is myopically focused on re-imagining street food and culinary icons through the lens of an Italian palate. Snacks are delivered to the table as a single bite of nostalgia that’s hard to place. Fontina in Carrozza is a minute grilled cheese sandwich, fully fried and topped with a thinly sliced cucumber and dill salad. It’s an amalgam of Americana and Jewish deli, punctuated by salty Serrano. Fritelle is a self-referencing riff on arancini, a fried ball of cool ricotta drizzled in a hot chili-laced honey. These bites are snapshots of familiar food that land on the tongue so assertively that they conflate memory altogether as worlds collide. (The only notable exception to the entire menu is “corn found on an Italian street,” which, despite a dusting of pulverized pepperoni, is far closer to Mexican street corn to be considered an effective cover.) 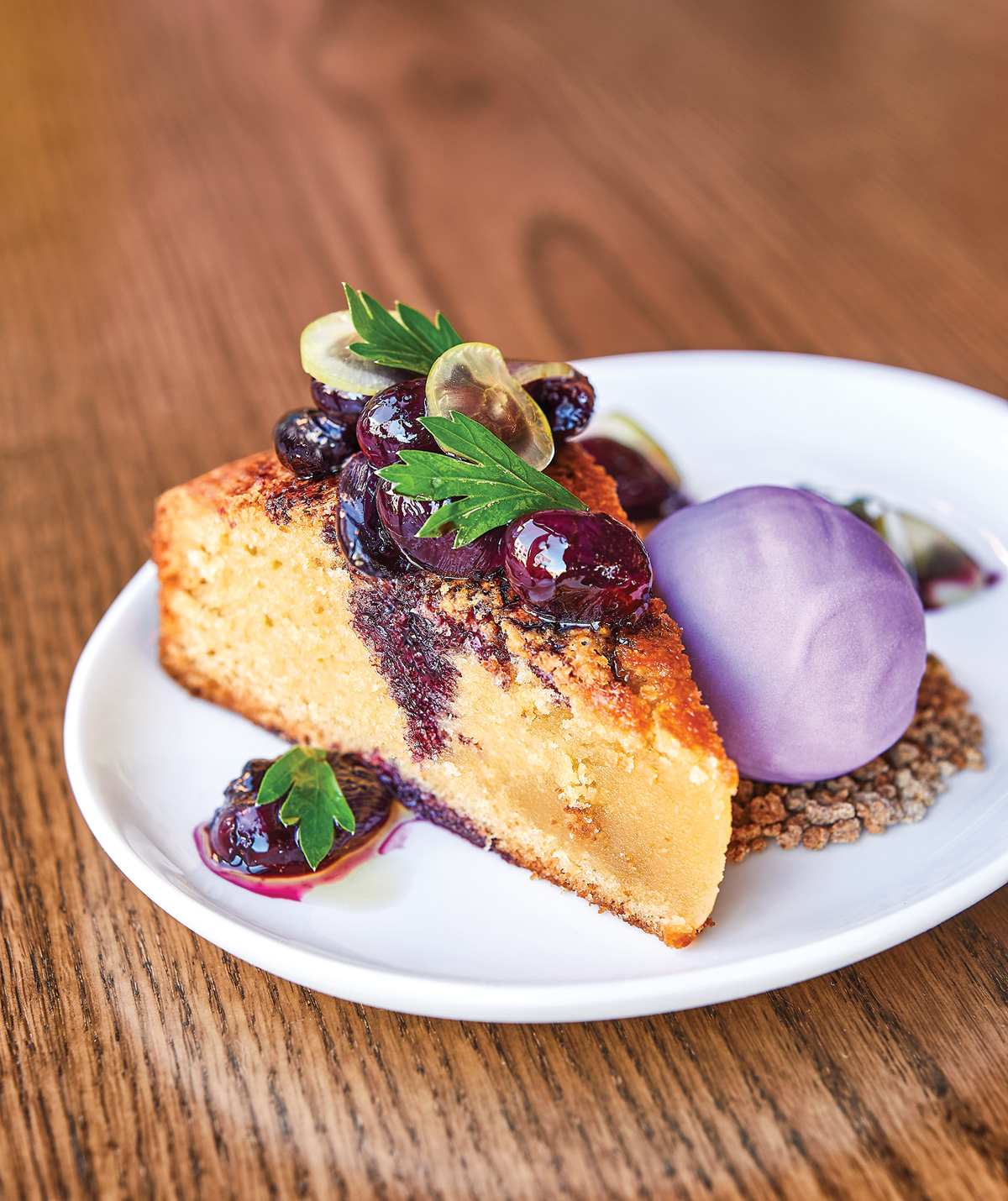 It’s clear though that Giusto wants you to graze through a meal given that larger plates top out at $22 with portions restrained enough to allow for a pasta dish to be inserted into every meal. (More on that later.) The proteins — sea bass, pork shoulder and rib-eye — are less cross-cultural though not less interesting. Steak is served sliced with antipasto-style peppers and fish is fully Italian in a lemon nage with capers, olives and tomato. The pork, however, is in a world of its own. Braised for tenderness and roasted until it resembles burnt ends, it evokes Southern barbecue at its best and, with charred carrots, it doubles down on its homage to cinder and smoke. If you think Italian food is entirely of the earth, take note of this dish that tastes as if it came out of Hephaestus’s workshop, with a burnished exterior and industrial pride. Not everything worthy of admiration needs to be beautiful.

Of course, dessert will tell you otherwise. The restaurant’s last course is its pageant girl, decked out in color and artfully plated. There are simple scoops of house-made gelato daintily placed in silver bowls (the clear winner is a hazelnut chocolate chunk with marshmallows) but the spotlight can’t help falling on cake. Dense, moist olive oil cake is paired with seasonal fruit in rainbow hues but its crowning glory is a dome of herbaceous basil gelato that bridges the gap between garden and pantry. 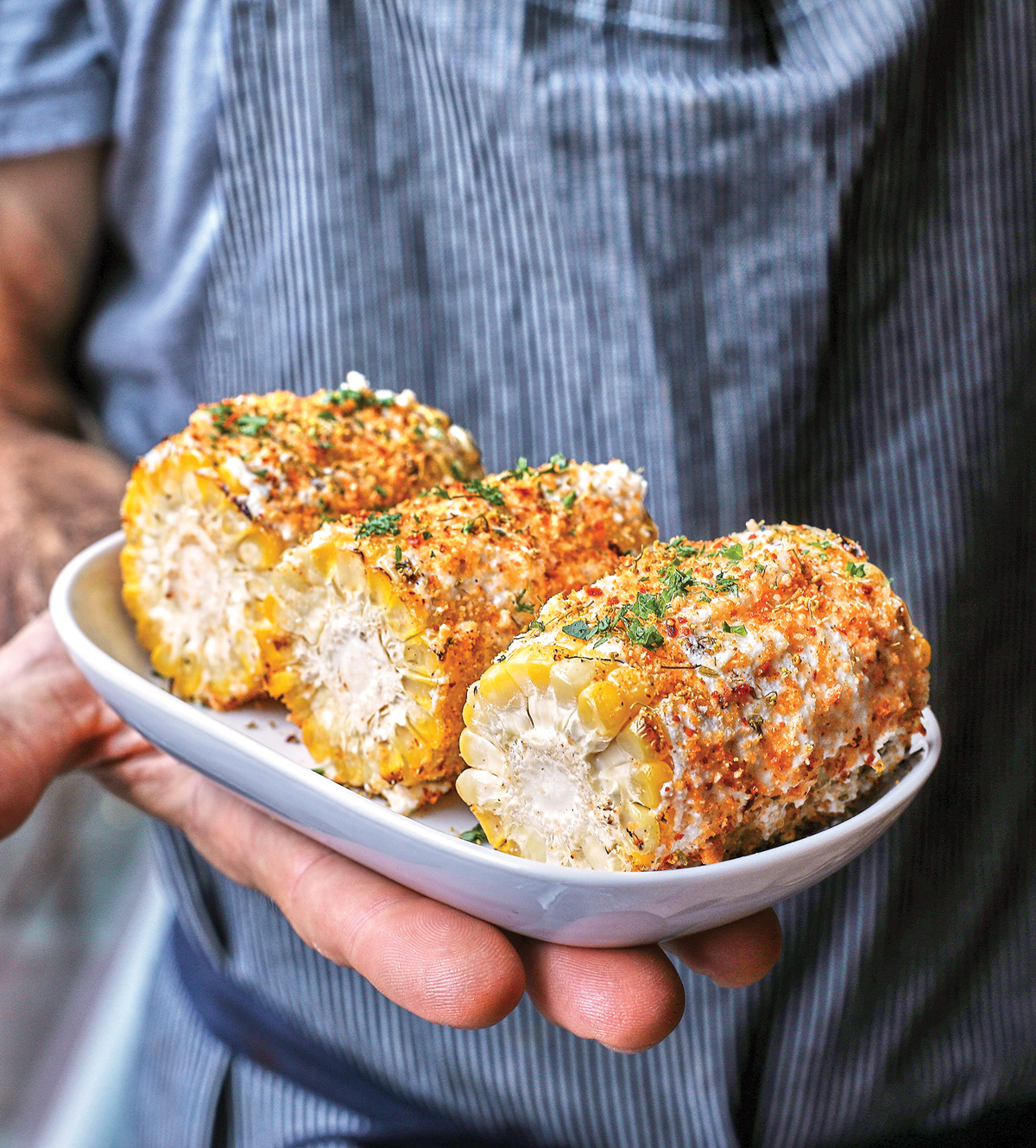 “Corn found on an Italian street” with pepperoni and sheep milk ricotta. Photography by Angel Tucker

Even better is the wedge of chocolate torte, studded with dark chocolate chunks and topped with a grid of tart cherry tomatoes, laid out like a Kandinsky painting. It’s a jarring combination, rich and sharp — a pairing of formidable opposites, each unwilling to acquiesce. If it pushes boundaries (“I don’t know at all what I’m feeling,” says an off-duty lawyer), the meal is better for it.

And if that were all O’Donnell were offering, it would be enough to secure Giusto’s longevity. He balances technique, vision and humor in a proportion that makes room for every diner on the spectrum. But I’ve left the soul of the kitchen for the end because it’s pasta that creates the lasting impression. It’s the pasta — after three bowls — that will prod you into noting that every Italian meal should end with yet another bowl of pasta. To say that there’s a marked difference between dried and fresh is as banal as saying there’s a chasm between “Dogs Playing Poker” and “Wheatfield with Crows.” Fresh pasta — proper pasta — is the foundational reason people fall in love with Italy. It’s the transformation of entirely ordinary ingredients into something divine and O’Donnell is at his most artistic with a simple extruded dough. The mafaldine is everything wrapped into one: a take on retro green bean casserole that incorporates beans, crunchy onions and chanterelles into a stew that coats thick ribbons of pasta. But if you’re after unadulterated showmanship — without any reference point other than joy — it’s in the rigatoni. Smoky bits of pork sausage along with a dusting of truffle and fresh peas is the defining dish of the restaurant in that it is both unpretentious and inspiring. It’s not that O’Donnell can’t surprise; he does so regularly. It’s that he toggles so deftly between eccentric and sublimely unadorned. The PR folks may call it freestyle but the rest of us refer to it as talent. Even the ricotta ravioli (slightly rectangular and referred to as “love letters”) can elicit an emotional swelling in a single bite. Covered with sliced fresh figs and coated in aged balsamic and poppy seeds, it lies somewhere between savory and sweet, in some realm between earth and a more celestial sphere. It’s true that Giusto’s best months may lie ahead as its massive patio reopens in the spring but, for now, there’s no view better than the plate of pasta that you’ll finish too soon. 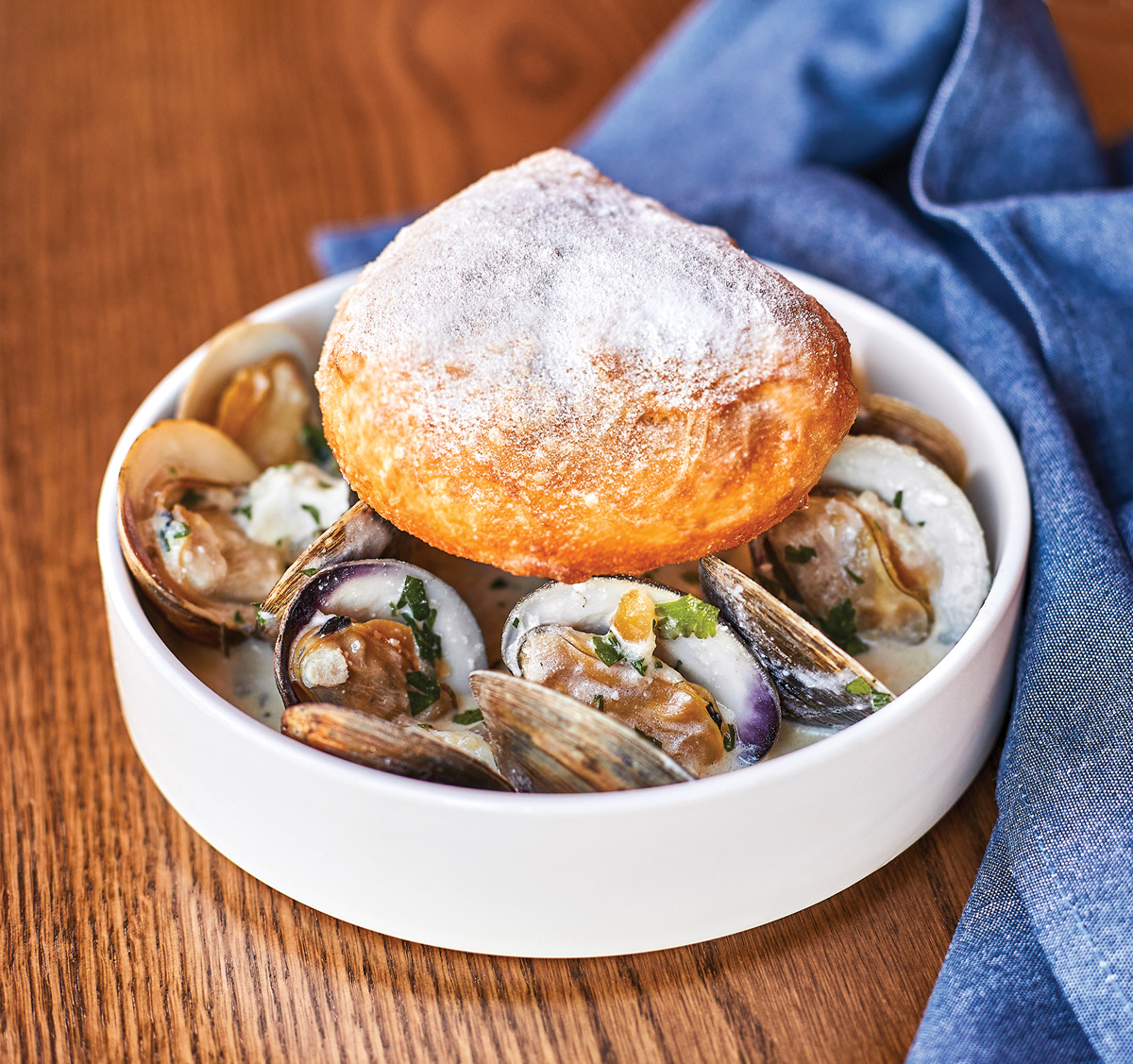 VIBE
Casual enough for boating clothes but
worthy of celebrations.

Karen’s picks
Anything but it’s a crime to forego the pasta.