Make the trip over the Jamestown Bridge to an exclusive coastal enclave featuring native seafood, international flavor and comfort classics.

The restaurant at 13 Narragansett Ave. in Jamestown maintains sentimental value for people across the state: It’s long been a spot to celebrate milestone occasions in the unrivaled patio garden. 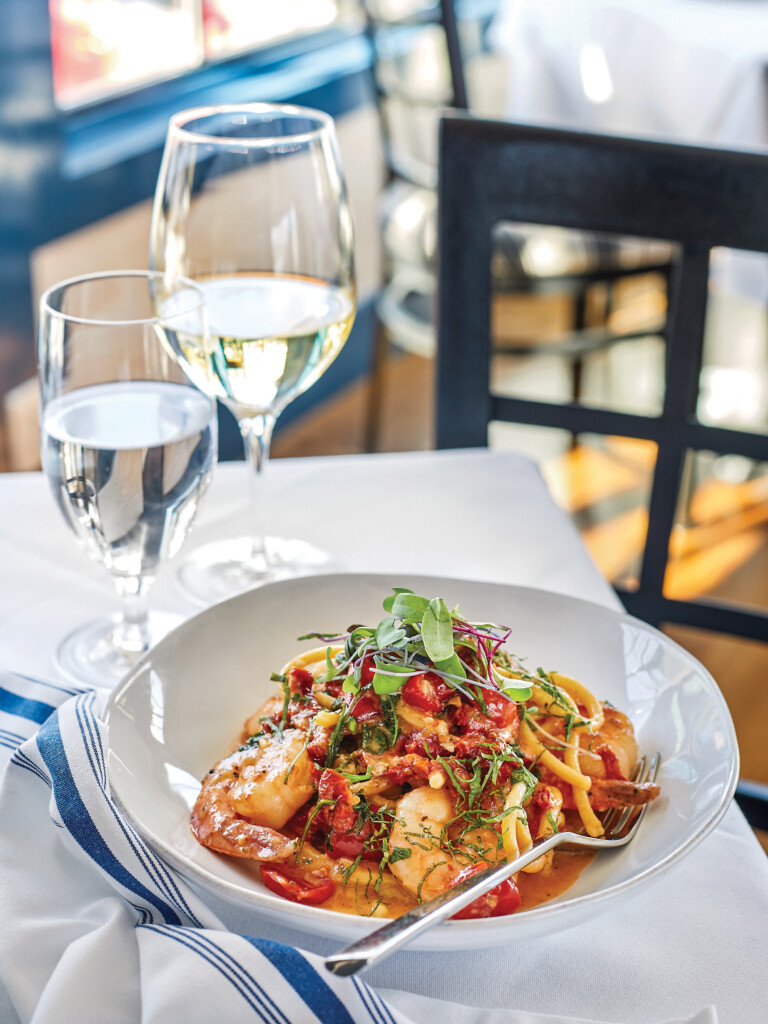 For years, Trattoria Simpatico lorded over the main street like an ancient mariner, marking weddings, birthdays and festive meals of various incarnations. Now in the hands of locally owned Conanicut Restaurant Group, Beech maintains the same authoritative stance, doubling down on a modern coastal aesthetic that magnifies its small-town grandeur.

Beech operates like a small city split into connected communities. Each small dining room sits on a different level, decorated in a variety of materials from nuanced stripes to grasscloth walls, all of which feel vaguely like a well-decorated yacht. Even the gleaming copper bar is punctuated by beachy blue paint and hardwoods, while the windows look out on a series of balconies, decks and patios, all of which house diners in warmer months.

But the centerpiece of the restaurant remains its outdoor space, replete with pergolas, family-style tables and a green tiled bar that sits under twinkle lights. If it lies dormant in winter, that simply adds to the promise of what Jamestown will offer in June. 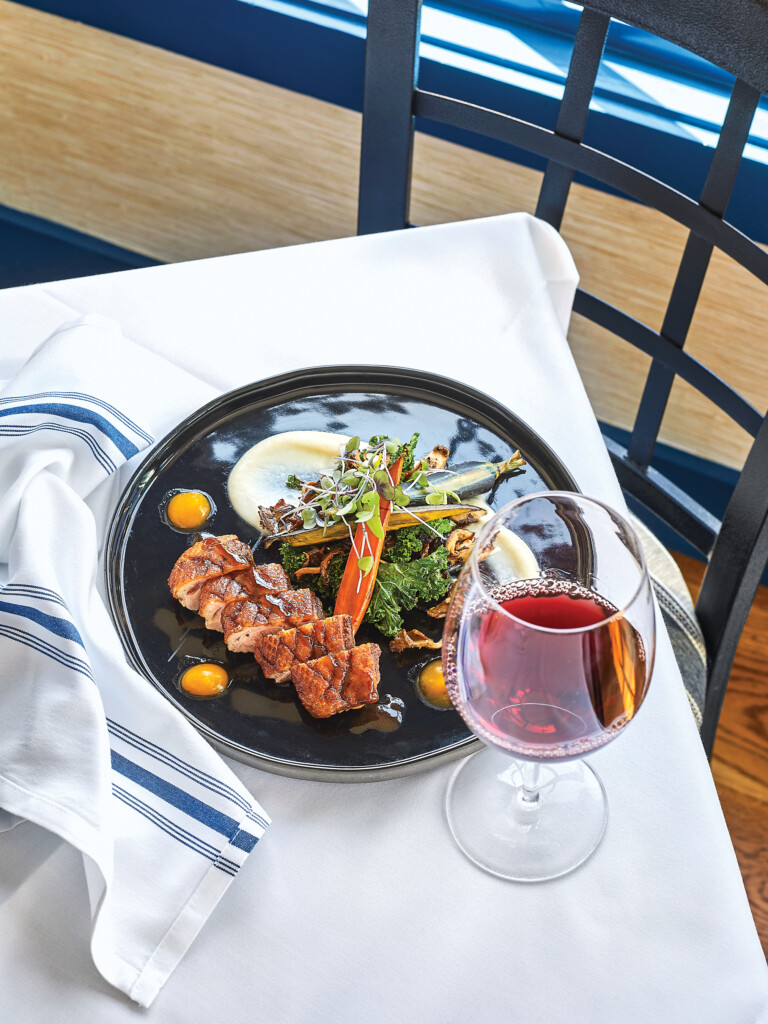 Indoors, servers in white oxfords, khakis and blue “Beech”-emblazoned belts cater to a local crowd which is often of retirement age. Dress code follows suit, with most people in fisherman sweaters and Helly Hansen jackets — anything that manifests the sea. It’s an almost religiously followed uniform until Hemingway’s doppelganger walks in sporting a Hawaiian shirt, orders a scotch, and the game starts all over.

Soundproofing is at a minimum, so dinner usually takes place among a din of salutations and proclamations. Diners are raucous but in a convivial manner. Eventually, however, everyone makes their way to the meal, and this is the juncture where water meets land.

The menu follows the seafood playbook faithfully: oysters ($2.85), clams ($1.85), hamachi ($14) and tuna poke ($14) are fresh from the water with simple adornments. But this is a place of revelry and minimalism is only offered in small doses. Chef and co-owner Kevin Gaudreau — who was leading Trattoria’s kitchen twenty years ago — spends more time focused on an array of international flavors. Calamari ($14) is served with olives and tomato aioli while spring rolls ($13) are stuffed with smoked chicken and sauced with both Japanese ponzu and Peruvian aji amarillo. Sauces in a variety of dishes add levels of piquancy but the kitchen is particularly fixated on texture as the driving force. No surprise that Americans like fried things, and though Beech is worlds away from a snack shack, it’s dishes like these that jog some recessed part of the memory that’s sitting on a beach towel, baking under the sun. Even baked clams ($14) — topped with only a humble mix of buttered breadcrumbs — still taste like summer. 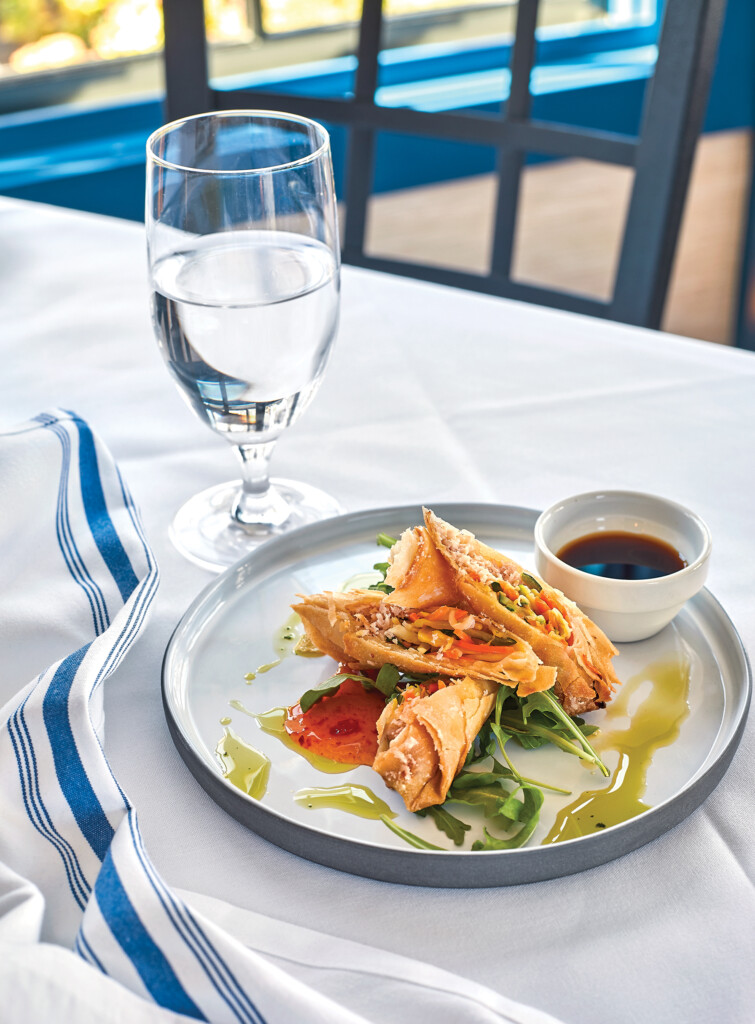 But the tenor expands when meat hits the table. Ribs ($14), for example, are coated in sticky plum sauce — not falling from the bone (as everything here maintains some decorum) but still an advertisement for casual dining in a sprawl of opulent real estate. Surprisingly, one of the most welcome items on the menu is a buttermilk fried chicken sandwich with Alabama white sauce ($15). Its roots are anything but New England, though the familiar, obsessively good sandwich makes it clear that you don’t need to be stepping off a boat to find a home at Beech.

That’s not to say that the kitchen turns its back on its pedigree. Warm lobster rolls rarely go out of season and shellfish shows up wherever it can. A delicate lemon shrimp is noteworthy but mostly for the toothsome chitarra pasta that’s made in-house ($24). There’s an awareness that summer homes, too, must hunker down in the off-season and the kitchen offers steak frites ($34) and seared duck breast with sage demi-glace ($28) to welcome in the winter.

Regardless of season, though, Beech is as much a bar as it is a restaurant. The post-COVID renovation was extensive and — more than installing sleek slabs of copper and yards of vivid wallpaper — the goal was to make each room feel like a living room, open to all. Smaller seating areas have a more residential feel, and inside or out, people will sit long into the night with a glass of wine or a neat scotch. The cocktail list is also centered on gathering things together: mezcal and grapefruit soda capped with violet-hued Empress gin or tequila mixed with a vibrant blackberry shrub. Servers will pop by to recommend their favorite drink or to tell a tale of what went wrong after too many. Either way, it’s a place that manages to feel both familiar and, simultaneously, as if you scored an invite to something that’s always been restricted. 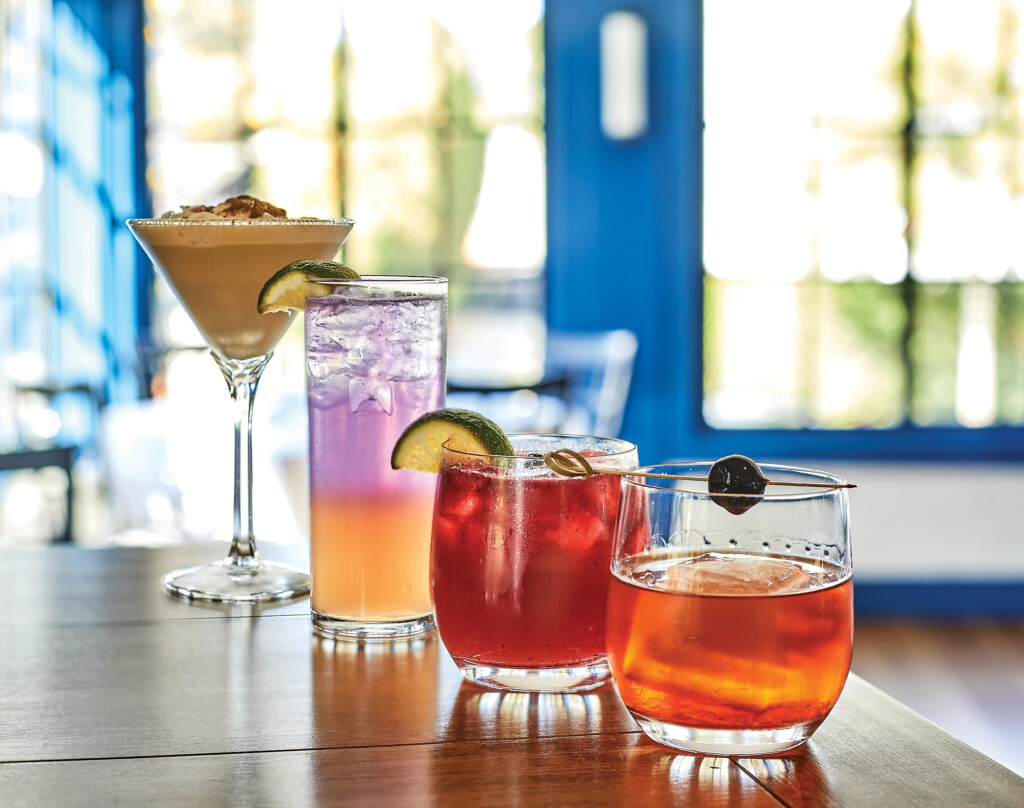 But every meal ends with a well-honed play on retro desserts. Berries and whipped cream are piled on shortcakes that are half biscuit, half scone: dense and doughy but not too sweet. Even better is an Italian mousse that’s embedded with so much chocolate, you could almost eat it like a candy bar. (The spotlight falls on a man who looks like Mr. Rogers and who declares that he will only take one bite of this rich dessert, before swiping it back and refusing to share. Not every neighborhood is fully welcoming.)

Spend a night at Beech and it’ll come as no surprise that Gaudreau is a Jamestown native. The restaurant could get by on its enviable locale, but the project is clearly more expansive. Every corner of Beech tells the story of a small group of islanders who wanted to ensure that all the nuanced glory of this quaint seaside town would be manifested in one sparkling, multi-tiered plot of land — and that it would feel like home to those who walked down the street to get here, as well as those who had to cross the bridge. 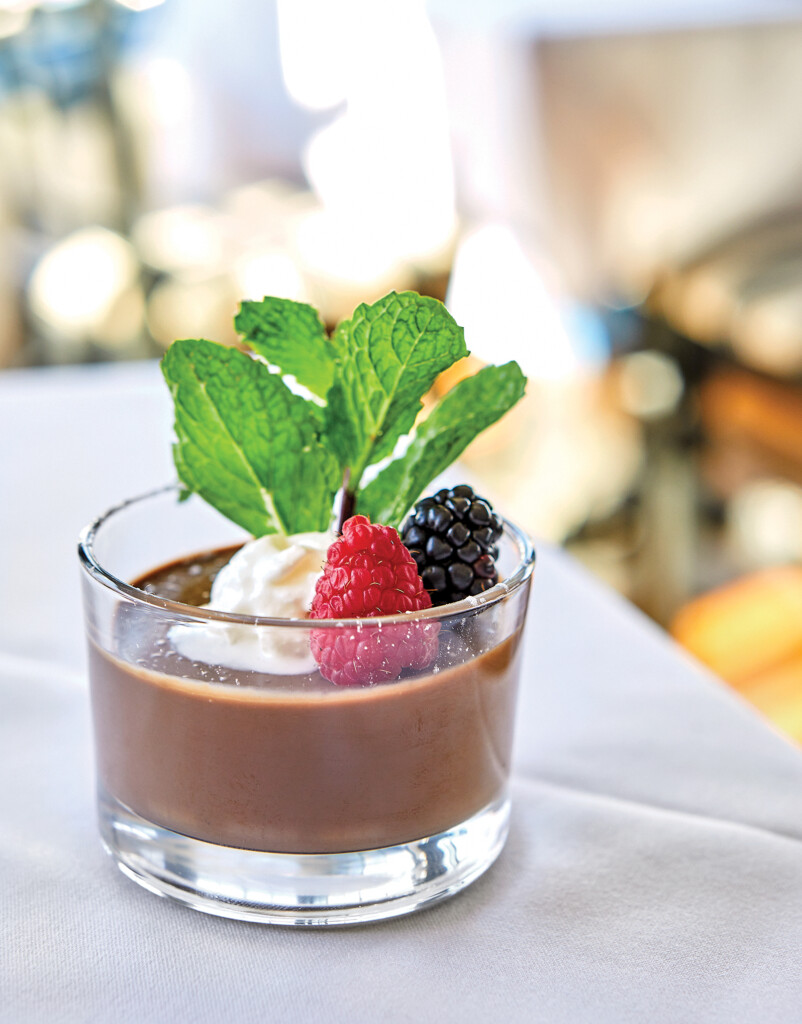 The chocolate budino dessert is both light and decadent. Photography by Angel Tucker

Lower portions of the restaurant are wheelchair accessible. Street parking.

Vibe: Everything that a beach house offers: a clean aesthetic and a lot of outdoor space.