Sue Cormier has a passion for solving previously unsolvable crimes.

Christine Cole makes her way down West Avenue in Pawtucket on a 23-degree day, January 6, 1988, a ten-year-old, bright-eyed girl with long dark hair on an errand to get groceries for her family.

In her mind, Sue Cormier sees Christine crossing busy Lonsdale Avenue to pick up clams at Red’s Seafood, now an autobody shop. Cormier, a veteran Pawtucket police detective and founder of the state’s cold case task force, sits in an unmarked cruiser visualizing the little girl walking toward home, stopping to play with friends in the gathering dark, and then going into Saints Market on Slater Street for milk.

And then on this cold winter day thirty-two years ago, the bright-eyed girl with long dark hair vanishes. She is reported missing. An all-out manhunt ensues. It snows that night; newspaper photos show investigators brushing off parked car windows looking inside for evidence. Or the girl. 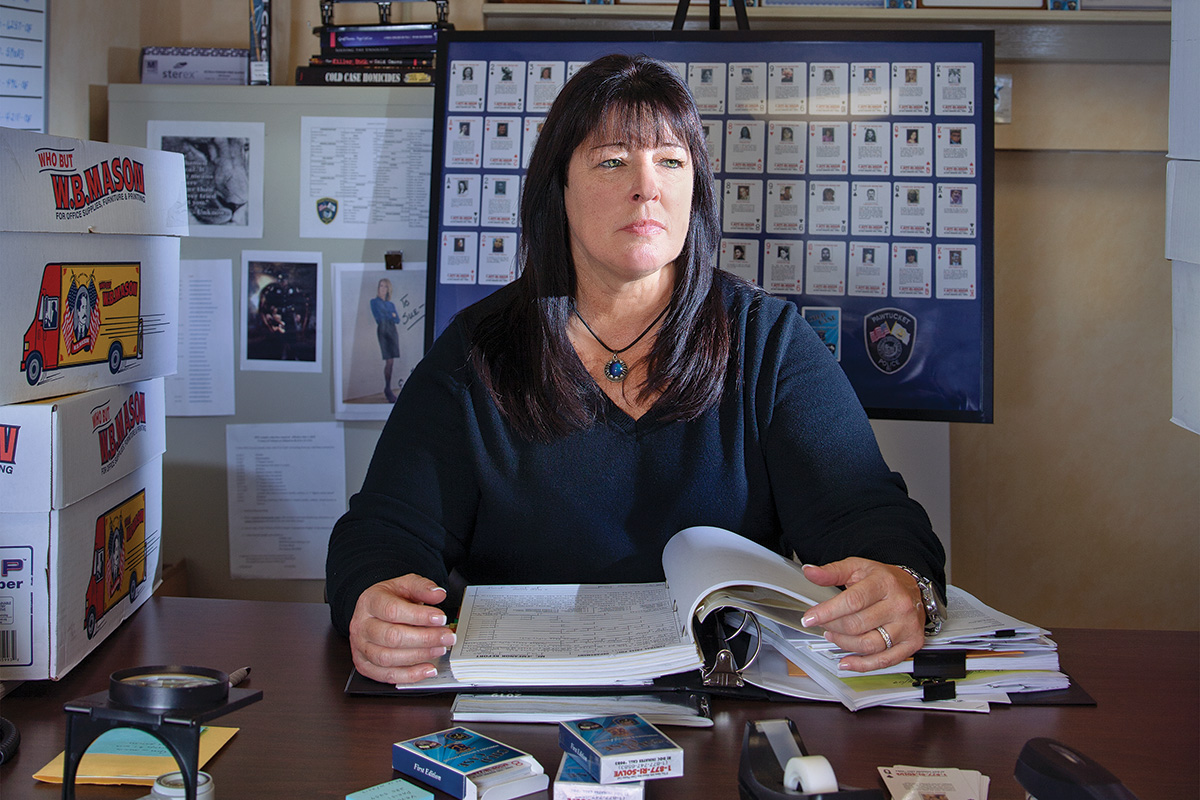 Detective Sue Cormier in her office in Pawtucket. The fifty-two playing cards on the wall behind her represent some of Rhode Island’s most difficult cold cases. Photography by Dana Smith.

The “all” that she refers to are the faces of fifty-two victims on a deck of playing cards Cormier created in 2018 to jar memories and help solve cold cases. The decks are sold for $5 each, online at coldcaseri.com, at various events and in commissaries in the state’s prison system. Who knows more about crime than other criminals, the reasoning goes; more than 700 decks have been sold to prisoners. Faces old and new from across the state are in the deck, from Rita Bouchard, ace of spades, who died at seventeen, her throat slashed, her back, breasts and neck stabbed more than thirty times in Pawtucket in 1947, her body found behind Slater Park; to Norman Baxter, the two of clubs, a young man with substance abuse issues who went missing from West Warwick in February 2017.

Christine Cole is the queen of hearts, a blown-up photo of her on one wall of Cormier’s tiny cold-case office in Pawtucket City Hall. It is so far the only case with seeming resolution, though it came not via a tip from the cards but DNA evidence: Joao Monteiro, sixty, arrested in July 2019, was arraigned on charges and is out on bail. The case is headed to the grand jury. The Central Falls resident had lived above the store on Slater Avenue where the little girl was last seen.

Time may have forgotten many faces in the deck, but Cormier hasn’t; she knows the details of all by heart. She is dogged in her pursuit of justice, enlisting the aid of cops statewide, and most notably Pawtucket’s cold case unit she formed in 2018, and the Rhode Island Cold Case Task Force that she founded as well. The latter, a statewide panel of law enforcement pros including FBI agents, forensic pathologists and scientists, detectives and members of the Rhode Island State Crime Lab Trace Evidence Unit, meets twice a month to collectively investigate the state’s cold cases.

It is a labor of love; when Cormier’s daily routine of investigating major crimes in Pawtucket ends, her cold-case work begins, virtually all on her own time.

“I joke with people I’m not in this job for the income, I’m in it for the outcome,” she says in a way that tells you she’s not really joking at all.

Many faces in her office look down at Cormier, Christine Cole’s most of all, her bright eyes that of a little girl who will forever be ten years old.

Cormier joined the Pawtucket police as a patrol officer in 1993, making detective in 2005 and working major crimes since 2007. Growing up in the Cowesett section of Warwick, she showed an early interest in law enforcement by joining the Warwick police department’s cadet program that teaches teens the basics of policing.

No one in her family was a cop, save for a cousin in the FBI. “It was just something I always had an interest in, wanting to help other people,” she says.

“I was this incredibly shy, sheltered Italian kid,” says Bruno. “One day waiting for the bus, this girl starts picking on me, poking fun at me. Sue steps in and says ‘Hey, knock it off.’ ” 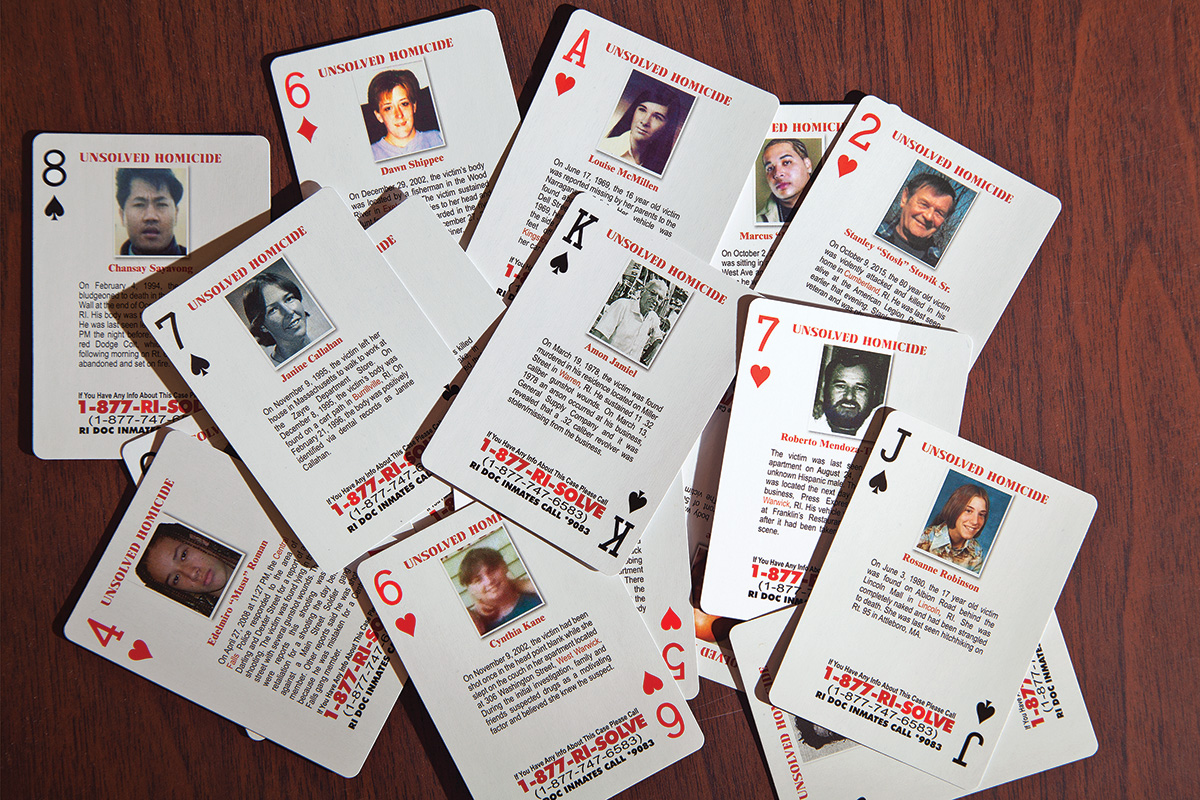 Christine was murdered in 1988, and is the queen of hearts in the deck of playing cards. Photography by Dana Smith.

The friendship was instant and solid, Bruno says. “That’s Sue’s character. I look back at that and know she is exactly where she needs to be right now. She’s always aware of someone acting out against someone else; even then she always conducted herself at a level of integrity you wouldn’t expect in a teenager.”

When Cormier hears Bruno’s comments, she laughs and shrugs. “I didn’t tolerate that stuff,” she says. “I don’t like bullies, never have. People say I was intimidating then, they say it now but look at me. I’m 5-foot-2!”

“She never stood up for nonsense,” says Jocelyn Newman, another Cowesett friend. “She’d speak up for anyone being mistreated, poor kid, rich kid, popular kid, it didn’t matter. If you were a good kid, she’d stick up for you.”

Even as a child, Newman says, “Sue definitely had a presence, we all had a healthy fear of Sue. You didn’t want to be on her bad side, and that said, she was never mean to anyone. She would be one of the first to notice if you were having a bad day, and she’d sidle up to you and ask if there was anything she could do.”

Cormier and Bruno joined the police cadet program together. “Sue took it very seriously, she absorbed everything she could. Me, I was in it for the socializing,” Bruno jokes.

Cormier’s nurturing nature was evident in adolescence as well. When the gang was out dancing and drinking, she would be the sober one driving everyone home. And when the girls married and became moms, Cormier would be the one with the first-aid kit when the kids got hurt.

“She has the best grace under pressure I have ever seen, she’s the most prepared person you’ll ever meet,” Bruno says.

After graduating from Tollgate High School and going to college “on and off,” Cormier says, to study criminal justice, she worked at an insurance agency. The day she was notified of her acceptance to the police academy was the day she gave her two-weeks’ notice. She graduated the academy two days before Christmas in 1993 and immediately joined the Pawtucket police department — never actually having been to Pawtucket or many other places in her birth state.

“It’s hard to believe, I know,” Cormier says with a laugh, acknowledging Rhode Island’s fabled parochialism. “I’d never driven through the state before coming to Pawtucket. I was twenty-three, but before that I had no reason to be in this part of the state.”

She worked her way up, loving the community, the cops, the camaraderie. She spent twelve years on patrol working with seasoned officers, learning, yearning for more, making detective, working juvenile crimes, fraud, then major crimes, including murders. She earned a criminalist certification at the University of Rhode Island’s crime lab in 2014.

A few years ago, she was contacted by a Warwick detective investigating the cold case of Wendy Madden, murdered in Pawtucket in 1991, two years before Cormier became a cop. Cormier was Facebook friends with old classmates who knew a suspect in the case, and when the Warwick cop investigating it found out Cormier was in law enforcement, they traded thoughts on the case.