Pawtucket is the unofficial craft beer and spirits capital of Rhode Island. One of the latest local liquor companies to launch is White Dog Distilling, a bar and distillery located in the historic Lorraine Mills on Mineral Spring Avenue in Pawtucket. “White Dog is slang for moonshine,” says one of the four partners, Alecia Catucci.

“Every spirit starts out as moonshine. It’s the recipe that determines if it’s whiskey, bourbon, gin or rum.”

The distillery’s tasting room opened in April of 2018 in what is now its current production room, a 350-square-foot space that had bar seating for four people and a standing-room-only floor plan. As of September 2019, the distillery moved production to a 950-square-foot space in the same building, which allowed for a bar plus lots of lounge seating where they serve cocktails and tastings.

White Dog Distilling’s four founding partners, affectionately called “the pack,” include Alecia and her husband, Carlo Catucci, Eric Sylvestre and Vincent Greene. All four partners have careers in different fields, and three of them devote part of their time to the distillery. Carlo Catucci is a physics teacher and chair of the science department at Scituate High School, Silvestre works for the VA and Greene is a lawyer. Meanwhile, Alecia’s main focus is the distillery. Making spirits started out as a hobby for her husband, Carlo. He is a big rum drinker and was making whiskey and rum in their basement with an alternate fuel license that allowed him to make it, but not sell it. Three years ago, Carlo and Alecia went on a date in Pawtucket, hopping around to some of the breweries, including Bucket Brewery (now Smug), Foolproof and Crooked Current, also in Lorraine Mills.

They were inspired by Crooked Current’s up-from-the-bootstraps story, and booked an appointment to see the space where the brewery first started. Once they saw where Crooked began (and before Crooked, it was Bucket Brewery’s first location), they signed a lease in October of 2016. “There wasn’t really a plan to open a distillery, but when the opportunity of having a small space came up, we had conversations for a month or less and decided to give it a try.” Now, just a few years in, they’ve already doubled in size. 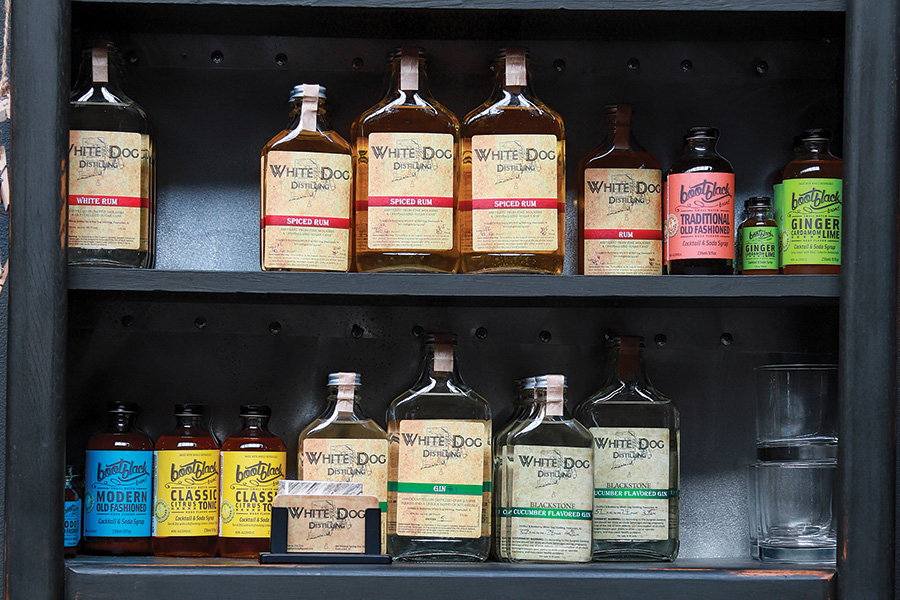 White Dog Distilling started out making unaged spirits, including corn whiskey, gin, white rum and moonshine. The distillers graduated to aging whiskey in barrels, including the Cornucopia whiskey, which is aged and spiced, and bourbon, aged in new American oak barrels. They also make limoncello based on Carlo’s late aunt Lella’s recipe from Italy. The team has a fifty-gallon still that they use to make everything. They create one spirit at a time during the distilling process, hold the liquor in totes, then switch it up.

White Dog Distilling has a system for keeping track of each spirit and each partner’s schedule. Three partners work at the distillery to produce the liquor. Juggling full-time careers with the distillery is a challenge, but one they’ve been willing to take on. “We have a production calendar that’s color-coded,” says Alecia. “We have production, we have events, we have labor all marked.”

So far they are happy with the expansion of the tasting room, but they hope to boost production. They recently purchased a 150-gallon mashtun to make whiskey mashing a little easier. “It will help us improve efficiency and increase production in specifically the bourbon. Instead of having to do three mashes and three strains and three distillations, we do one mash and hopefully no strains,” Alecia says. “It will eliminate twelve hours of work for us.”

White Dog Distilling will always be a small batch distillery. “It’s definitely meant to be a business that can grow. We fund it ourselves, so we are very pragmatic about monitoring our growth,” says Alecia. “We’re just taking it step by step.”

Note: At press time, the distillery is operating at a reduced capacity and reservations are highly encouraged. Reservations can be made online or, if you prefer to take your drinks to-go, curbside pickup is also available. 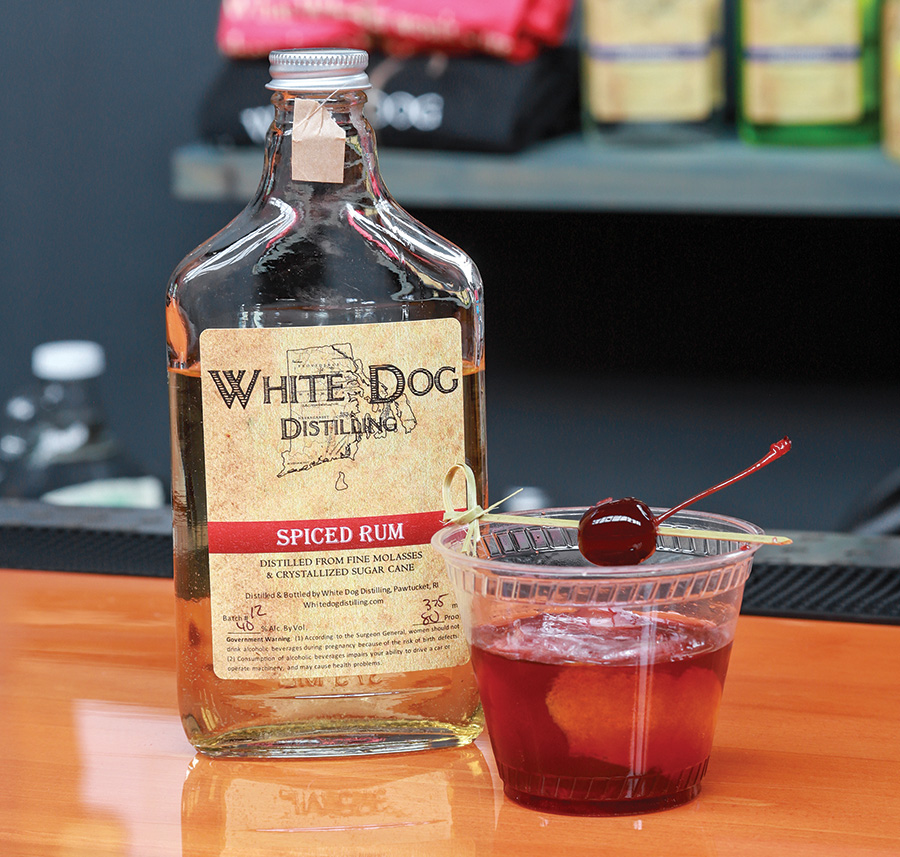 Foolproof
Foolproof pairs beer with life experiences. Try the Ocean State Lager, which has a soft and subtle malt profile balanced with a refreshing hop flavor. There’s nothing to be fooled about here; pay homage to the smallest state with a brew or two. As of press time, the brewery is open for curbside pickup only. 241 Grotto Ave., Pawtucket, 721-5970, foolproofbrewing.com.

Isle Brewers Guild
Hi neighbor! The sprawling, multi-building, 130,000-square-foot complex has brought Narragansett Beer back home. As a craft cooperative space, the Guild is brewing not only ’Gansett, but beer from other local breweries including Devil’s Purse, Wash Ashore, Willie’s Superbrew and more. The Guild is open for reservations and limited walkups only. Masks must be worn. 461 Main St., Pawtucket, 724-1241, theguildri.com.

Italian Corner
“What’s for dinner” is the dreaded question we all wish to avoid, but Italian Corner makes it easy for you. Pick up a ready-packaged dinner including premade pasta or meat options, and while you’re at it, order a sandwich for lunch to satisfy your midday hunger. As of press time, takeout is only being offered. Call ahead to order. 10 Boyd Ave., East Providence, 431-1737, italiancorner-ri.com.

Modern Diner
As a staple of Pawtucket history, Modern Diner was the first diner to be recognized on the National Register of Historic Places. The diner, which was a model of 1930s and ’40s factory production, resembles an original sterling streamliner that was popular during the pre-World War II era. Modern Diner offers traditional diner fare, so get your breakfast bites on. The diner is open for takeout or limited indoor seating by reservation only. Masks must be worn and social distancing is enforced. 364 East Ave., Pawtucket, 726-8390, moderndinerri.com.

Hartley’s Pork Pies
If you like meat pies, you’ve come to the right place. Hartley’s Pork Pies sells several pies with a variety of fillings (despite the name), including chicken, pork (duh), beef and salmon. Crisp, flaky crust and a steaming-hot savory filling: What more could you ask for? Call ahead to place an order for pickup. Masks must be worn. 871 Smithfield Ave., Lincoln, 726-1295.

Bow Ties Greeting Cards
Do you ever scan the card aisle but can’t find that one that says exactly the right thing? Bow Ties Greeting Cards can help you find the words you’ve been searching for. Rhode Island native Phil Ayoub, founder and owner, has designed cards that are anything but ordinary. Heavily influenced and modeled after his dog, Bailey, the pair has come up with cards for all occasions and in all tones. In addition to the cards, the company sells clothes, hats and other collectibles. 1005 Main St., suite 8211, Pawtucket, 641-1116, bowtiesgreetingcards.com.

Ryco’s Trimming Co.
If you’re crafty, Ryco’s Trimming Co. is the place for you. Equipped with every fabric, thread and sewing tool imaginable, the shop has the right supplies for beginners and experts alike. Whether you’re making a quilt or a teddy bear, you’ll find resources and inspiration at Ryco’s. Masks must be worn and social distancing is enforced. Orders can also be shipped or picked up, curbside. 25 Carrington St., Lincoln, 725-1779, rycotrim.com.

Frog and Toad
Gift shops can seem humdrum when stocked with the same generic knickknacks and bric-a-brac. Not so with Frog and Toad. The store is filled with a quirky assortment of art, jewelry and apparel, with shirts announcing Governor Gina Raimondo’s well-known COVID quote, “Knock it Off,” “Wear your Damn Mask” and “Shut it Down.” 795 Hope St., Providence, 831-3434, frogandtoadstore.com.

Blackstone River Bikeway
Explore Rhode Island’s industrial past on two wheels. The Blackstone River Bikeway offers spectacular views of the river and winds past some of the state’s older mills and factories. The trail crosses the river several times, with views of cascading waterfalls and wildlife-filled marshes. The path goes from Cumberland to Woonsocket and is more than eleven miles long. Cumberland, 726-0250, dot.ri.gov.